It Will Be Hard

Cartoonist and writer Hien Pham wants It Will Be Hard to be many things: a story about queerness, sex positivity, gray asexuality, polyamory, people of color, body image, love and relationships; it’s also a comic and an interactive choose-your-own-adventure, sort of; readers are also warned up front that the story contains a section of “explicit sexual content,” which, in the gameplay aspect of the story requires a reader’s consent or it can be skipped altogether.

That’s a lot to ask any reader, be they adventurous, woke or merely curious. And yes, the verve Pham generates from his cleverly cheeky title gets lost in its complicated (and entirely unnecessary) structure. The narrative about the relationship between two men, Harold and Arthur subsumes a secondary plot with poorly developed supporting characters whose goal of organizing a festival between different business owners (who are perhaps also cosplayers?) loosely connected to a time of past strife before “the convergence.” Lydia, the owner of the bar Harold and Arthur work at and who is in a polyamorous relationship—which is de rigueur in this unspecified time and place and therefore requires no further interrogation, but rather ‘is’—explains, “it would have been easy for the nations to just fight, but it takes guts to sit down and listen.” This subplot is such an on-the-nose metaphor for Harold and Arthur’s story, but takes up so much of the narrative that it feels both indulgent and underdeveloped at the same time.

Pham’s writing is, at best, precious, and, at worst, serious, striving to be so inclusive and inoffensive that it loses the difficulties (the ‘hardness'), about life and love that it so desperately wants to celebrate. All of which is to say it’s too bad because the love story Pham tells—or at least wants to tell and for whatever reason can’t or won’t— feels authentic, thought-out and, above all, charming to a fault. Somewhere in this comic is the story of two men whose love and desire for one another and willingness to do the hard work of being in a relationship should be enough; unfortunately that story seems too insubstantial for Pham to tell on its own and so instead, he distracts his reader with games and pasteboard plots.

Such critical hand wringing turns out to be stuff and nonsense given It Will Be Hard was successfully funded on Kickstarter, where it was promoted as “A Choose-Your-Own Gentle Smut Adventure.” Such a niche concept is perfect for crowd-funded project where passion rules all and editors are scarce. Pham’s work appeals to a specific readership familiar with interactive storytelling from a queer perspective. And perhaps that’s enough. Perhaps because there are so few digitally-downloadable comics that promote such ardor, some sort of inoculation kicks in to look past complicated and shabby storytelling on the basis that it, at least, serves an under served population. At what point does accessibility or idiosyncrasy skirt quality?

At its best and least byzantine, It Will Be Hard is a love story about an easy-to-root for couple, Harold and Arthur. They have conversations around mealtimes, they make and eat a lot of soup, and the intimacy of their pillow talk is vital and genuine. These moments are not about “explicit sexual content", they're about the explicit connections between lovers regardless of sexuality or sexual preferences. Genuine snapshots of that are rare and deserve praise. When Pham concentrates on Harold and Arthur, the comic is pure, rapturous and altogether sexy. Think Before Sunrise except gay, but not exactly.

Arthur is asexual, more specifically, gray asexual, aka gray-A or a ‘gray ace.’ As he explains it to Harold, “Sex is not my need, but I am not repulsed by it either. I can live without it, but I can choose to do it, if I wanted to. That doesn’t make me a better or worse person, just different.” What this dialogue lacks in naturalism it makes up for in theory—which could be Pham’s overall theme of this comic. To go on step further, Arthur's ideology about physical intimacy goes hand in hand with It Will Be Hard. Read or not. Choose or not. According to Arthur (and Pham?) neither makes the reader/player better or worse and each is equally acceptable ... only different. But is that enough? 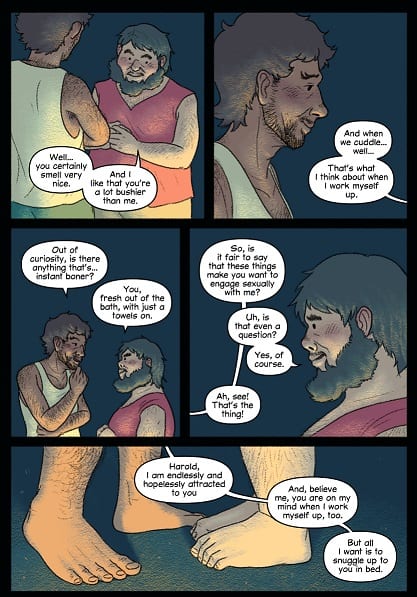 Arthur’s sermon on ‘sex and the gray-A’ occurs before the aforementioned explicit-ness and is delivered in such a preachy and pretentious manner, its un-sexiness (almost) obliterates what’s to come (if you choose to do so, of course). The story doesn’t clearly specify how long Arthur and Harold have been together, but from their conversations, memories and the context of the story, they are in a long-term relationship. Which makes Arthur’s words and tone ring false. He does not sound like someone talking with a longtime lover, he sounds like the author directly addressing the reader, perhaps a reader who has long wanted to hear or to say as much. Direct address, even thinly-veiled direct address is not a crime, but it often falls flat, if only because, who talks like that? And in the case of physical intimacy: who talks to their lover like their reading from a dictionary? Who wants to be spoken to in such a manner? It’s so much cold water on what should be a moment of emotional intimacy that it loses much of its impact and meaning. This is a consummation of Harold and Arthur’s love for one another—an act the reader has already been warned about at start is going to happen—which for someone who identifies ‘gray-A’ must matter, a lot. Consider what Arthur is doing at this moment, what he's risking and why. So why this speech, especially now? Is Pham so desperate to really, really, really, make his (personal?) agenda clear he’s willing to sacrifice the work he’s done to develop these characters simply to make a point?

If Pham’s dialogue reads as cool, his drawing and coloring betrays the physical desire the characters have for one another, and Pham the cartoonist could teach Pham the writer a lot about storytelling. The composition intimates how desire reduces physical space and betrays language. As Arthur launches into his heartfelt Wikipedia definition of asexuality, Pham draws each character’s face or upper body in either their own individual panel or set at opposite ends of a shared panel, the point is space, separation. These panels are intercut with what’s going on below: Arthur and Harold’s feet and hands. When the two finally come together it’s in their extremities where they connect. As Arthur finally gets to his point, that it’s Harold he loves, Pham draws their feet inching ever closer. In a wonderful detail Pham shows the toes of Harold’s right foot curled up like a sprinter waiting for the gun. Finally, Arthur takes hold of Harold’s hand, there’s a moment of anticipation that reads like a schoolboy dare—I’ll do it, but only if you want me to want to do it—before Arthur relents and tells Harold, he’ll “give it a shot.” The two lovers grip forearms and it’s on … or not, since this is the moment the reader must decide to abandon abandon or go for it. 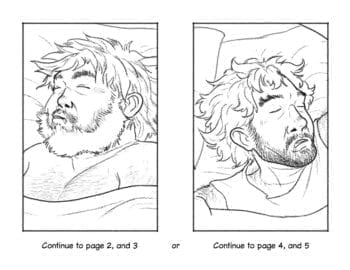 Given what It Will Be Hard does well vis-à-vis its shortcomings, its backers have spoken and so too have game developers. Pham recently received a 2018 Australian Game Developer Award for It Will Be Hard’s “mix of art, sound and gameplay.” On his website, Pham describes It Will Be Hard as having “light choose-your-own adventure mechanics the player can use to create their own reading canon.” If by “light” he means almost not at all than the description is accurate. “Cave of Time,” “Space Patrol” or “Who Killed Harlowe Thrombey” or those other classic second-person P.O.V. choose-your-own-adventure Bantam paperbacks from the 80s and 90s this ain’t. Whereas those stories give the reader agency to choose which story thread to follow with branching consequences, Pham’s proffers, with the exception of the aforementioned explicit-ness, allow the reader to choose from either Harold or Arthur’s point of view. Do you want to wake up or get dressed as Arthur or Harold? In the end it doesn’t matter because you’re standing in the same room and waking up in the same bed. The panel composition and colors are nearly identical so it’s difficult to see differences and extract meaning. It’s “light,” true, but it’s an act of selecting a setting, not really making a choice, not to mention, boring one at that. When Harold does have a choice to make to be with someone other than Arthur who provides him with physical intimacy, but who’s possessiveness borders on being mentally abusive, the ‘light’ choose-your-own adventure mechanics are absent. Instead of offering the reader a choice in these instances, Pham gets to decide. Again, that’s not choice, that’s narrative.

The something-for-everyone approach of It Will Be Hard is laudable for attempting to be inoffensive (bland?) and always, always safe, except when it isn’t. The sex is graphic and sexy to say the least. Asexuality in any color or shade is on the periphery of popular culture and relationships or romances with someone who identifies as asexual even more so … so why play games with it? Why can’t Harold and Arthur be Harold and Arthur? Why make the reader choose? Pham raises a larger question he perhaps does not intend since he seems firmly set on being as non-confrontational as possible. What happens to art in an age of trigger warnings? It’s a political question as well as a question of political correctness. No artist (nor anyone for that matter) wants to willingly (re)induce trauma. Yet, Art risks, full stop. And Pham’s disclaimer at the start of It Will Be Hard isn’t a trigger warning unless the reader is triggered by a experiencing a healthy relationship between two men that revolves around soup, mutual fellatio and long conversations. Comics are interactive and are not made more interactive by asking the reader to choose, when the choice is already made. 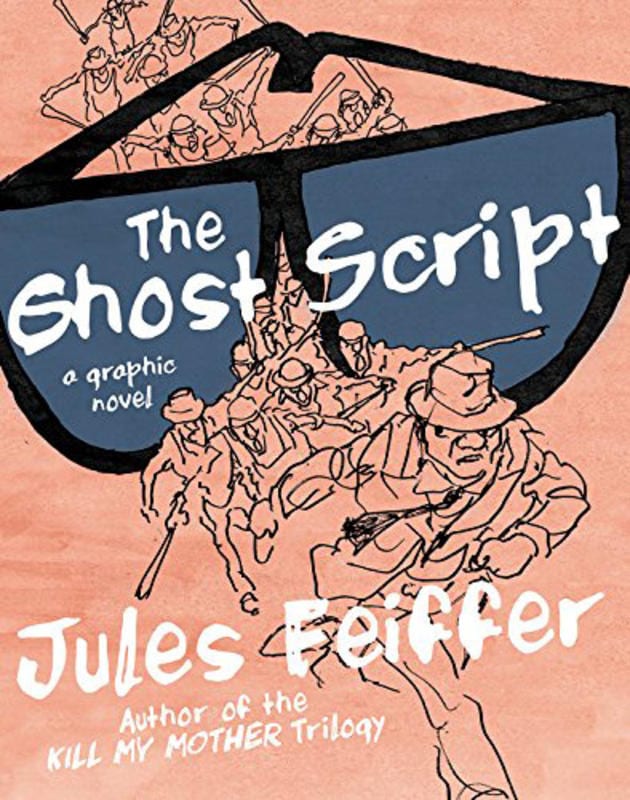 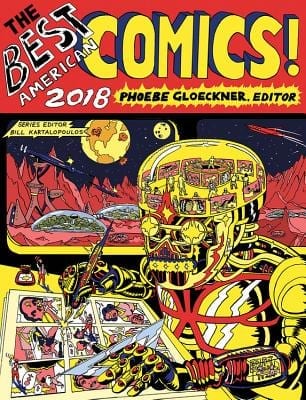