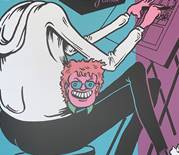 Mr. Van Deusen is a comedian. His form (currently) is comics. Although the Seattle cartoonist has applied himself to developing the many skills needed to create comics, Van Deusen’s instrument is his screwy sense of humor.

I’ve never read a straight Tom Van Deusen comic. A comic artist who devotes themselves to humor is a rarity, despite the name of the form. One who can do it well is even rarer and Van Deusen can count himself among that company. For the last few years, he has steadily produced a stream of well-crafted comics which are increasingly adept at inducing guffaws, snickers, and snorts. His latest, Expelling My Truth, from Kilgore Books, is another noteworthy clown-shoed stride in that direction.

The ancient Greek philosopher Hepatitis once wrote, “The purpose of truth is so that we may know ourselves and each other.” If that’s the case, then Tom Van Deusen’s Expelling My Truth, reveals nothing and everything. The choice of the malapropism “expelling” in the title is a prime example of Van Deusen’s deadpan wit. As with all good comedy, there’s a core of truth to the gag. The definition of “expelled” is to deprive someone of membership to an organization or a society. If you read enough Van Deusen, you’ll soon see one of the recurring themes running underneath the surface of his hilarious, off-kilter comics is that of not belonging; of being an outsider. 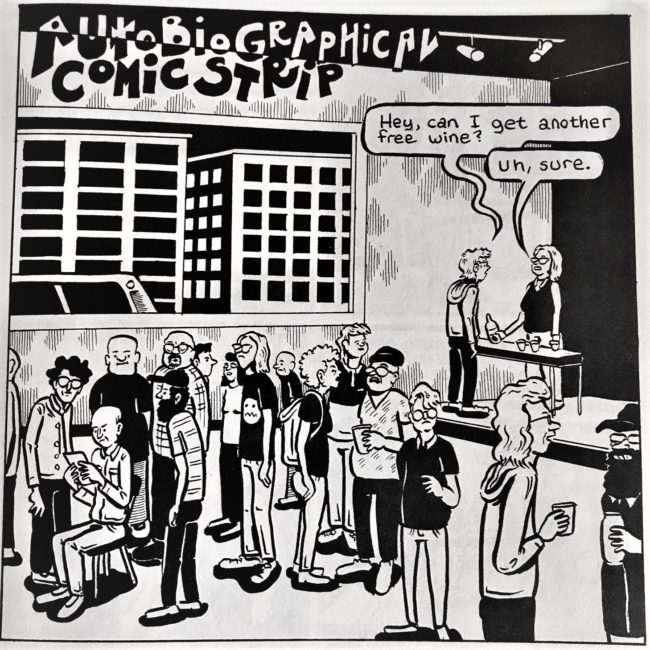 Instead of filling his panels with dull angst and self-indulgence about being on the outside, Van Deusen uses the tone-deaf lack of self-awareness of his central outsider character (almost always a grotesque representation of the cartoonist) to entertain and provoke. The comic book version of Tom Van Deusen usually has no clue his behavior is offensive, rude, sexist, alarmingly aggressive, pathetic, laughable, and socially unacceptable. He’s an outsider, a misfit – and he doesn’t know it. We laugh, and then we feel uncomfortable. And then we laugh some more. Van Deusen plays with the comedy of discomfort embraced by creators like Randy Newman, Gary Shandling, Judd Apatow, Ricky Gervais, Steve Carell, and Amy Schumer. 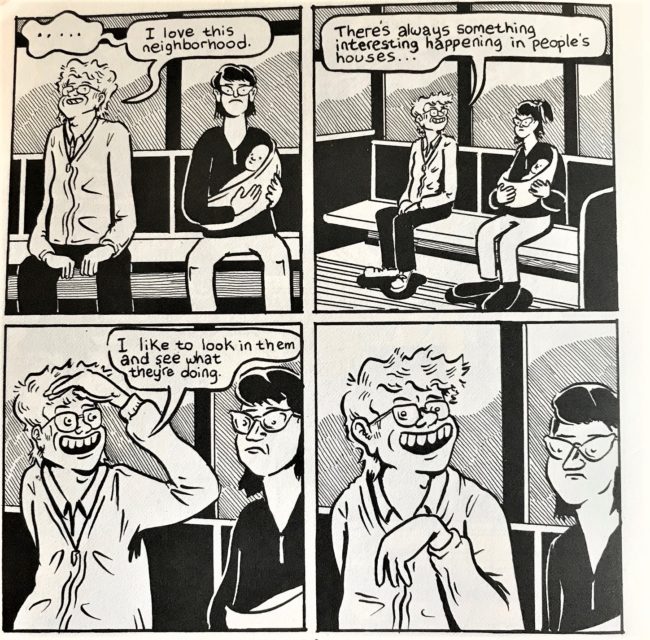 Take the 16-page centerpiece in Expelling My Truth, entitled “Autobiographical Comic Strip” (all three stories in the book have this title). Avoiding spoilers, suffice it to say this story is another in the series Van Deusen has created in which he is an outsider who encounters a Seattle celeb on their own turf. Past satires have included Dave Matthews and Jeff Bezos. This one begins with a squirm-inducing awkward bus conversation in which Van Deusen gleefully brags to a mother with a babe in arms (which he tried to hold) that he loves to look into nice houses and spy on the residents inside, which he then does. Once again, the cartoonist is on the outside, looking in. And – as happens in these stories – he is invited inside, and then the true weirdness happens.

Encountering another Seattle celeb, Van Deusen also meets an alien named Splaglooie (that name and Splaglooie’s similar-sounding nonsense words are delightful). The alien looks less like the disturbing UFO cult “greys” and more like a 1930s animated cartoon ghost (a startling similarity when it is pointed out). Splaglooie sports a tall striped hat that looks as if it came out of a Dr. Seuss children’s book, except that it contains mind-altering drugs. Where some cartoonists might have focused on this nice bit, Van Deusen has many more good ideas, so it is merely a small part of the overall narrative, which elevates the work to a higher level. In comedy, timing is everything. 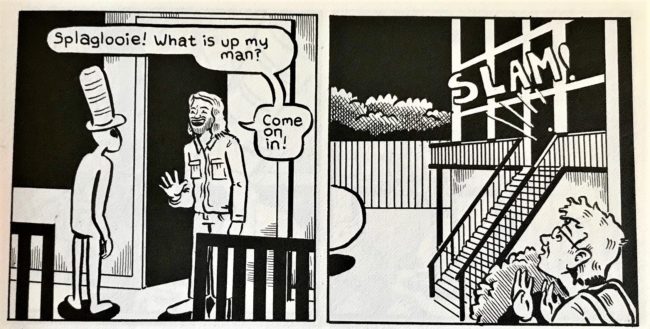 This story is framed by two others. The first is a short piece which serves as the comic’s throwdown, in which Van Deusen attends an art show opening for a performance artist. He seems to be at the crowded opening only for the free wine – a type of easy, amusing gag about the character’s shameless mooching. This facile joke is offered in the book’s first panel and never repeated, like a juggler beginning their performance by juggling one ball. For the rest of the book, the cartoonist goes for harder and more complex humor. 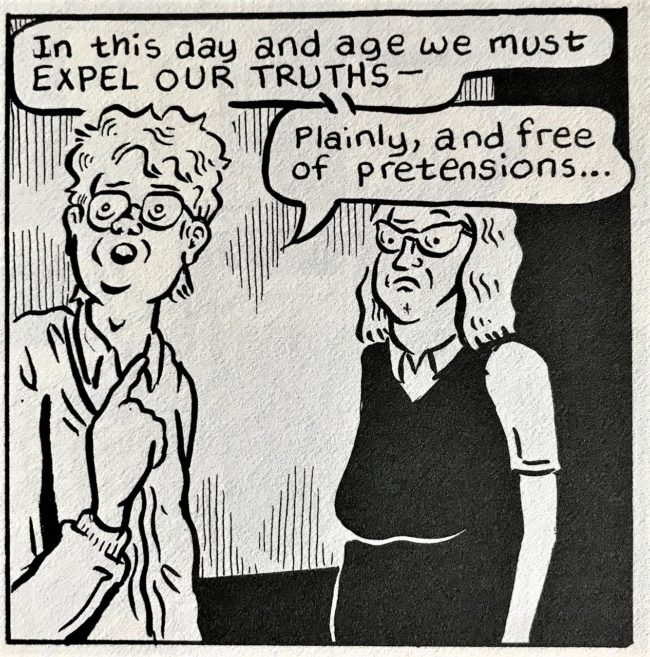 Disgusted by the performance piece, the comic book Van Deusen arrogantly declares, “In this day and age we must EXPEL OUR TRUTHS—plainly and free of pretensions not masked in deceptive metaphors and putrid rigamarole!” This is misdirection since it sounds like a thesis statement which will be supported by the pages that follow but in fact turn out to be a description (minus the “putrid”) of the book’s contents: 32 pages of pure, righteous rigmarole. 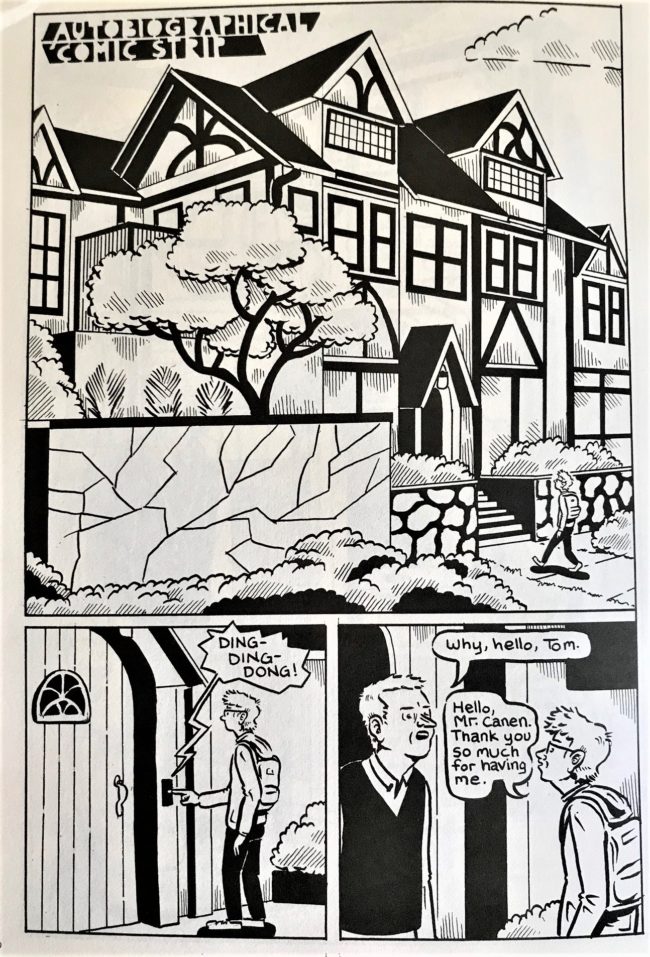 The last story in the trilogy is, for cartoonists and comics fans, what sandpaper would be if it were funny. Van Deusen is invited by his wealthy corporate CEO employer to his home (another return to this favorite set-up) because he is a cartoonist. For this narrative, Van Deusen shows himself as more or less “normal,” shifting the reader from laughing at his boorish idiot version to sympathizing with him. To say more would give away the fun. 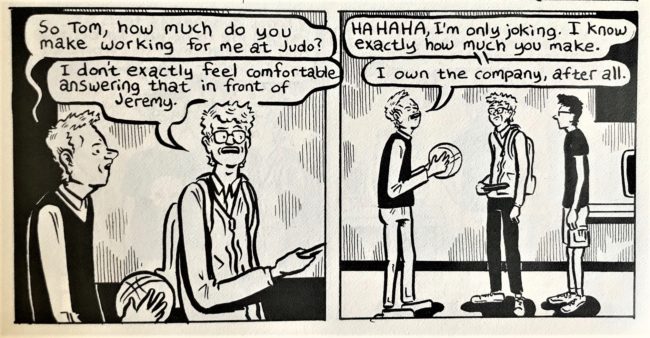 Expelling My Truth is a sort-of satire of autobiographical comics which thankfully avoids the conceit of using the format and making it bad (as unfunny as a comedian parodying a musician by singing badly) and instead smartly embraces solid storytelling, wit, and true comedy presented with such straight-faced sobriety one never quite knows when one is being screwed with. Van Deusen’s narrative skills and art continue to improve with each new release, and this new set of stories expels very smoothly indeed. 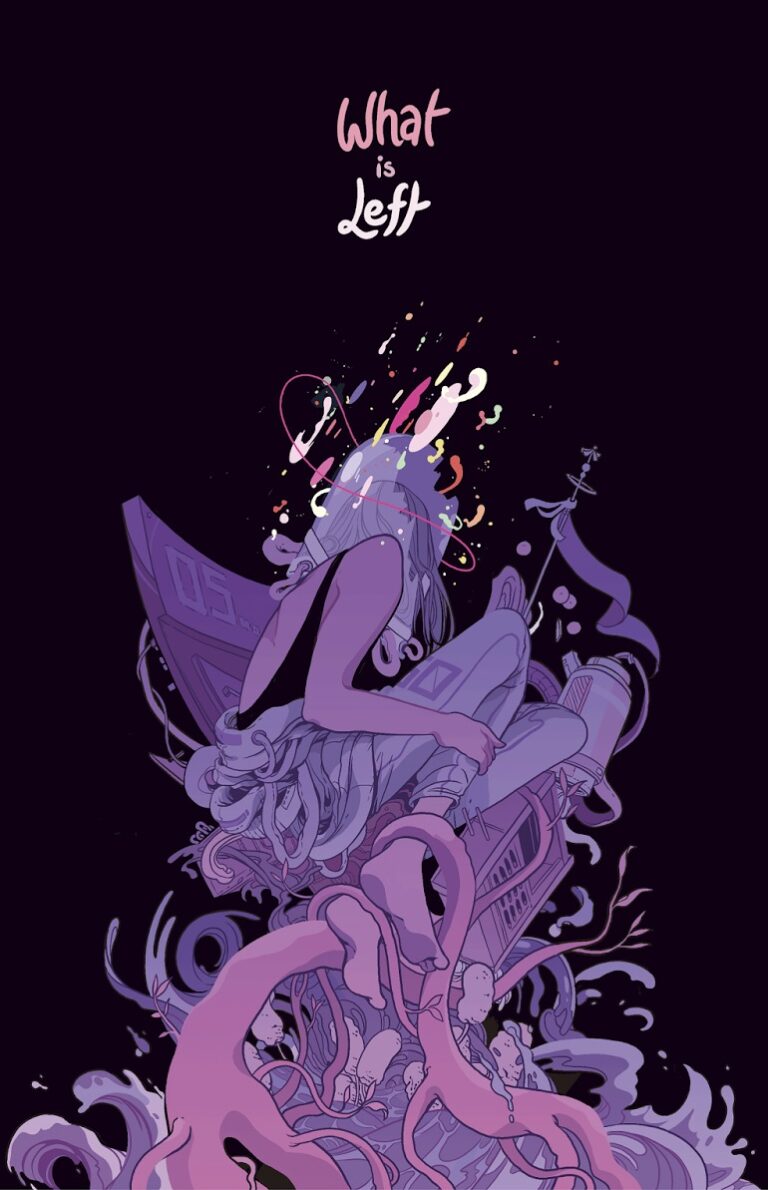 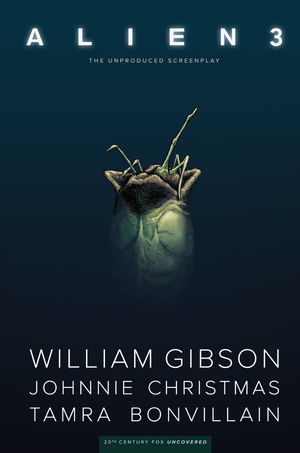