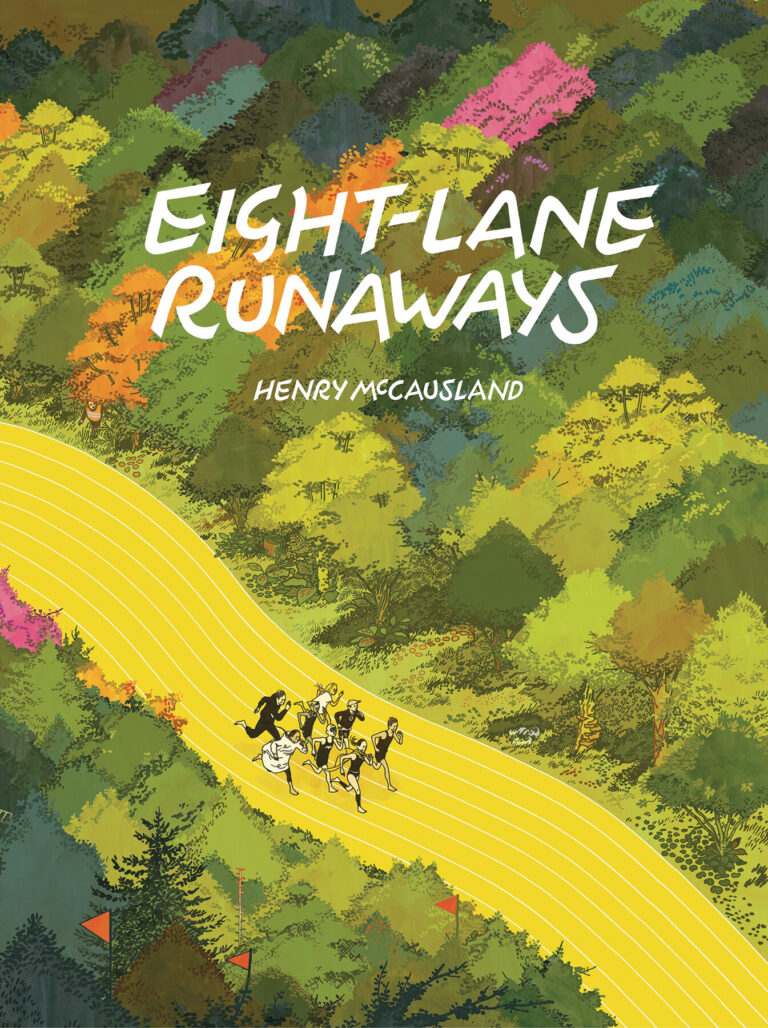 "Actions create stories." That's what this book is about, according to its author's Instagram announcement. It could've been a thousand pages longer, and it could've been a single strip, and therein lies the beauty of Henry McCausland's vision—it's an electric universe that expands and contracts at will, sweeping the reader along with its coldly comforting tracks.

Eight-Lane Runaways is McCausland's first full length graphic novel, although he has previously put out a number of excellent zines, paintings and short stories that all connect in a vision of a still, suspended world, where everything is frozen in mid-motion. His work is about everything and nothing—systems of communication, and symbols and signs, and the futility of narrative devices.

The book is ostensibly a race through a landscape simultaneously dystopian and utopian, a modern take on Raymond Roussel's Locus Solus with the leisurely stroll replaced by a leisurely run. Everything is a little hushed. The movements are light, so is the humor—nothing is ever milked, although things escalate just to the point when it begins to go too far, then snap back to a new digression. From the beginning it is clear—the story is the thing: the journey—not the destination.

Eight-Lane Runaways barely has a plot, instead there is a bunch of interconnected stories, and their foundation is often visual rather than narrative. The text often serves a rhythmic function, and together with the oddly familiar imagery, it creates a balanced flow that feels closer to a musical composition than your standard graphic novel. 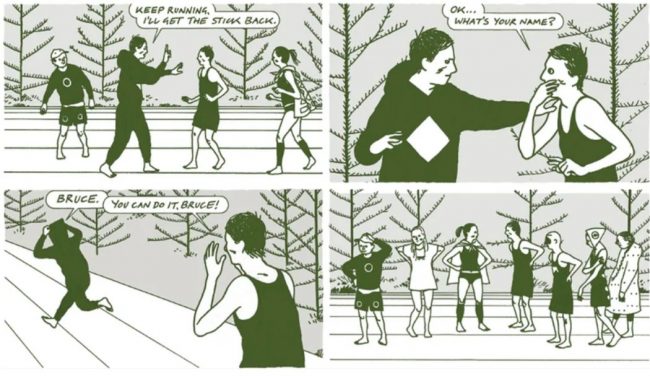 The world exists on its own, and it's a world of images removed from context. Living arrangements are always temporary, household appliances are used as props and installations. The characters are flat ciphers, obsessed with methods of relaying the information, rather than the information itself. It's an enclosed vacuum that feels safe and warm despite all the high-concept desolation. I'm reminded of the kitchen-sink surrealism of J.G. Ballard, Chris Reynolds and L.S. Lowry, as well as the miniature stories of Ivor Cutler—for all its experimental nature, the book is silly and fun, and it takes itself with a lightness that's rare in comics nowadays.

Hergé, Otomo Katsuhiro and CF are namedropped in the acknowledgements, and their influence is beautifully distilled into a style that's charged with sparse and quiet motion. It's an organic mix of flatness and gestural acting with lush evocative backdrops, never overdrawn and constantly hitting that delicate just-enoughness. 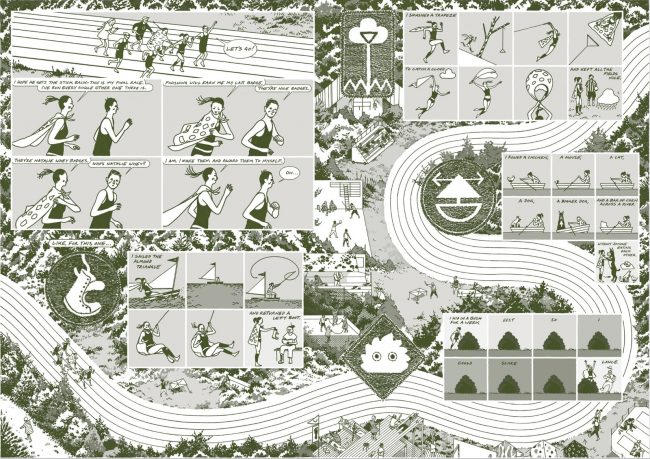 All movements and expression are equally artful, and everything just is. There's plenty of fun little details: the runners' feet are almost always synchronized, the sentient poncho has a cryptographic language of its own, and the surrounding locale is rich with hidden history. It's a serene place to lose yourself in: there's never any malice or conflict, the characters never take trouble to develop themselves into something needlessly dimensional, and each page stands alone as a model of the book itself—a careful arrangement of lines and words that make up the book's universe.

The ending is a sly concession to the format of the race—we have a winner, and the final page feels empty and melancholy, unlike the race itself with all its lovely strange detours. The process is the thing. 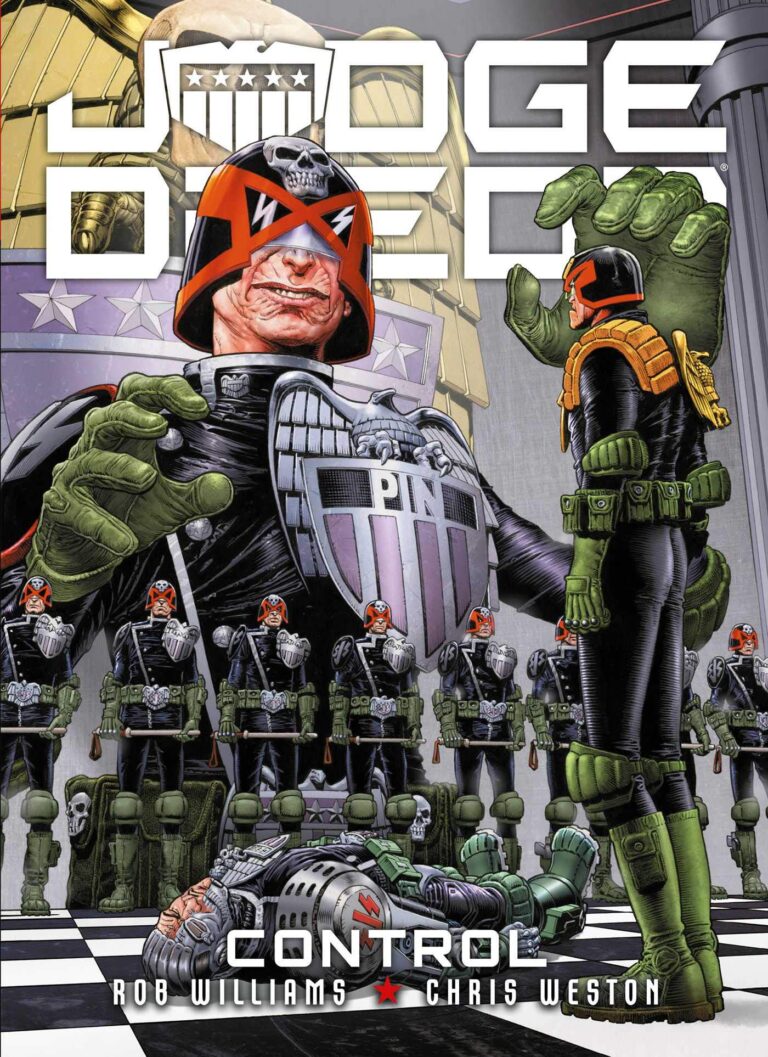 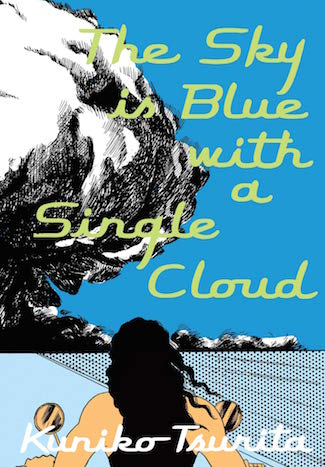 The Sky Is Blue With A Single Cloud