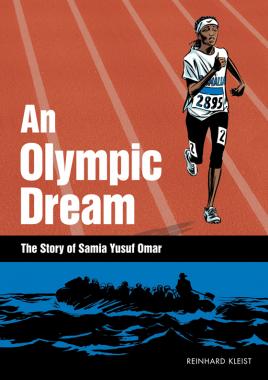 Biography, memoir, and autobiography are possibly the trendiest genres of book-format comics; one cannot even list the titles that have been published since the recent boom in the early 2000s. Some say that there are too many graphic biographies and memoirs already, and that they repeat the same tropes – but I like them. I like feeling connected to the story, even if its characters feel remote at first. It seems to me that connection is the ultimate aim of nonfiction biographical comics: to use the comics repertoire in a way that conveys immediacy and relevance to the reader.

By connection I do not mean that a certain historical period is evoked accurately or that a certain milieu is represented faithfully. All that is necessary, but not enough. By connection I mean the authenticity of a personality that appears through the pages. Connection is achieved by making me ask the same questions and contemplate the same choices which the characters do.

As is well known, comics does not only show a story, but also involves and immerses the reader: the narrative thread is constructed by us, readers, in our heads. And for this narrative thread to be a powerful one the artist and writer have to edit it in clever ways. This is true in the case of a graphic biographies as well: for the personality of the character to be conveyed, for the narrative to be authentic, the writer, artist, and editor have to organize bits of truth and bits of fantasy creatively. Their aim is to make up and construct situations where the hero of their biography can show himself or herself as an actual person.

Sometimes it is hard to make the character of an actual person show herself as there is very limited information available. I mean, who really knows what happened to Samia Yusuf Omar in Sudan or in war-torn Libya? We have very limited information about Samia the actual person – this is why the readers of her graphic biography need cleverly thought-out situations where there is enough space for the made-up persona of a comic character to breathe. 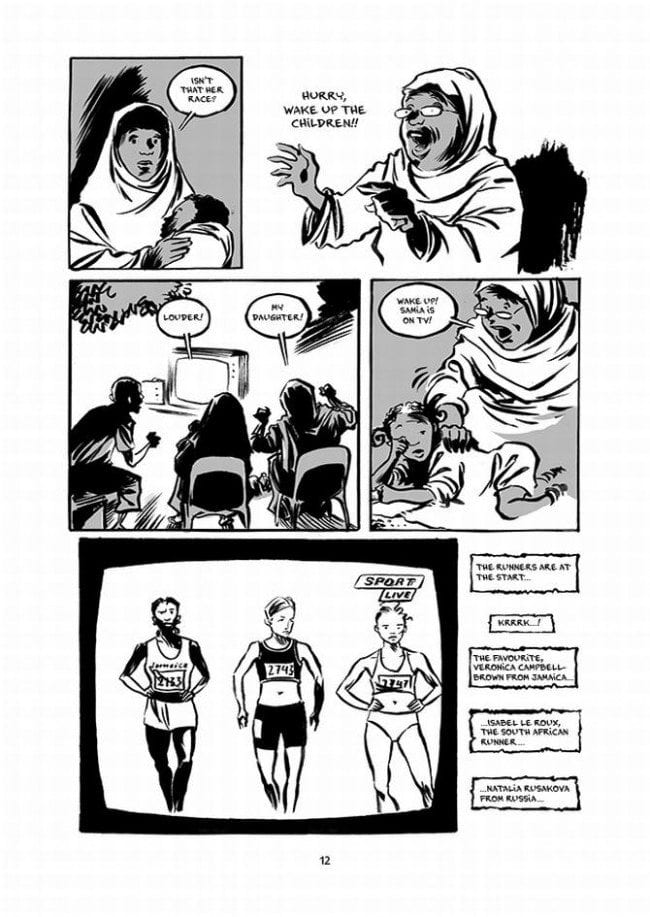 If the creators of graphic biographies do not construct a flexible enough space and do not let their heroes breathe, the reader will keep distant and eventually lose interest. Distance is the worst thing that can happen in a medium that is made up of visual sequences and tableaus waiting for the reader to come closer and investigate the tiniest shadow or line.

It is connection or involvement that I miss in the pages of Reinhard Kleists’s biography of Samia Yusuf Omar, the young Somali girl who ran at the Beijing Olympics and died tragically in the Mediterranean Sea. The story is poignantly up-to-date, and is a very important one to tell: hundreds of thousands of people have left or have been forced to leave their homes in countries that are historically connected to Europe, yet the new life they were hoping to find is not waiting for them there. My country, Hungary, for example, is surrounded by a fence. People like Samia are full of hope at the beginning of the expensive and dangerous journey, but in the end they waste away their days at transit zones and refugee camps, often without the sign of hope that their situation will ever improve. The European public and the political leaders are deeply divided by the problem of migration, and Kleist’s graphic biography, originally published in German (and translated into English by Ivanka Hahnenberger), has the potential to contribute to these discussions. It is a very needed biography. By choosing an Olympic icon to represent many, Kleist has a relevant, moving, and politically loaded story in his hands. 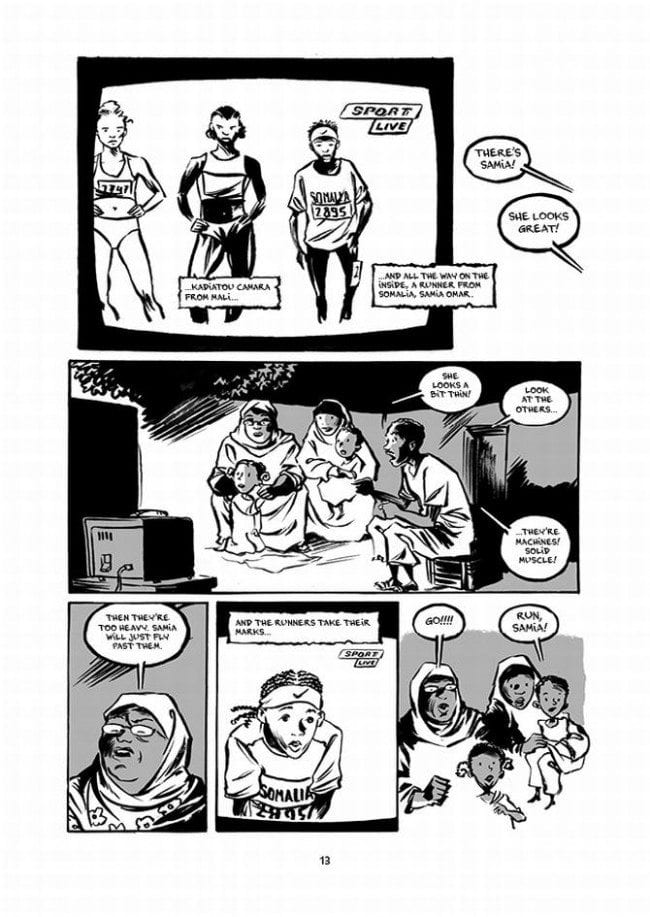 From the book we learn that Samia Yusuf Omar left for Europe hoping that she would have a chance to train for the London Olympics in Italy. In her native Mogadishu it has been increasingly difficult for her to train: she gets insulted by militant groups more and more often, and is even threatened to be killed. At the same time, she does not have any facilities to train at. She starts the journey with the 2012 London Olympics in mind, but has to learn that traveling illegally is always slower than one’s dreams, and the goal is never certain. Samia is portrayed as an isolated traveler among various groups of refugees and migrants. Her motivation to train grows more and more scattered as she is getting weaker and weaker physically and mentally. She arrives to the Mediterranean through Ethiopia, Sudan, and Libya. She is kidnapped, and then released for ransom. She goes to jail. She endures miserable conditions with other refugees in Tripoli, and has to wait long to find the boat that promised to take her to Italy.

In An Olympic Dream, Samia’s story is narrated and shown chronologically. Kleist focuses on turning points in Samia’s life, and the narrative is organized around Samia’s irregular Facebook updates (which the preface reveals to be fictional). Imagine the drama in the most often recurring situation in Kleist’s narrative: Samia is trying to answer Facebook’s standard “What’s on your mind?” query when she has just returned from the Beijing Olympics, when she realizes she cannot train anymore, or when she is further from home than from her destination, and being short of money, has no chance of reaching either. Unfortunately the book rarely asks the reader to imagine these situations; everything is portrayed from a decent distance. There are few scenes where the reader could feel that a character, a personality is immersed in an actual situation. Rather, way too often we simply get the results. During reading I could not help but feel the character of Samia hasn’t been given enough space between the pillars of the narrative. It is as if most of the time Kleist is afraid to go closer, to reveal the scenes where the drama actually happened. Or it is as if a series of snapshots was taken of the most important turning points, the most easily recognized, but how they are lived through is never shown.

The narrative bears close resemblance to the genre of the picaresque novel: it is characterized by an episodic plot, which one could add or take away episodes from at any time. The heroine remains essentially uninfluenced by what is happening, and there is hardly any character development. We do not learn much about her during the book. The pillars of her character, namely that she likes running, loves her family, and wants to run at the London Olympics, have been clear to us from the very beginning, but are unfortunately never deepened. Samia remains distant, we remain onlookers. 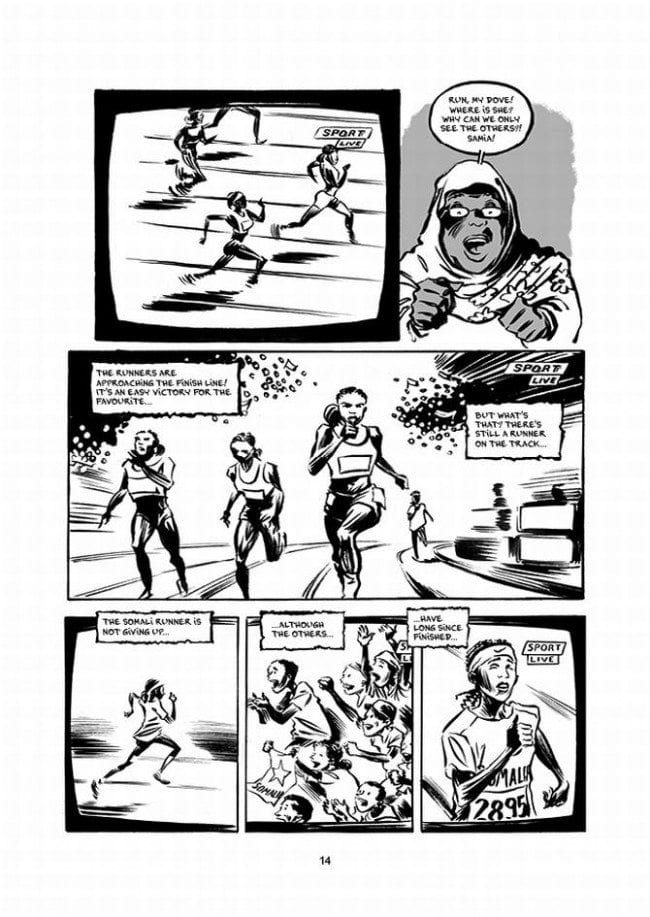 My favorite scene, where I feel Samia the closest, comes when Samia and her relative Mariam—with whom she started the journey, but later was separated from—reunite in Tripoli, and they find smugglers who will take them to Italy by boat. In the three-page sequence the two women are shown into a wooden cabin that is already crowded with refugees, and Samia is shown reading telephone numbers and messages carved into planks by previous groups. She gets really scared, and asks the guard to let her out to send a message to her family. At this point we see a chain, and it turns out that Samia has been locked in the cabin, and the last panel at the bottom of page 117 shows Samia begging. Kleist manages to show brilliantly the actual trap that Samia finds herself in and the metaphorical, greater, and more tragic trap that her life has ended up becoming. We breathe and feel with Samia here, and we contemplate the fates of the many before her.

Another scene where the reader is involved, and where we see the process of life, not just the pillars, is the wonderful depiction of the first scene: Samia is running in the distant Beijing, and the people in Mogadishu gather to watch the big race on what seems to be a rare working television in the neighborhood. We see how the community is cheering for the girl, and we also see that she is hopelessly different from the other athletes: she is smaller, thinner, and does not have the running clothes the others are wearing. The scene is long for the book, lasting eight pages, and it successfully immerses us in the story. We feel that there is a lot at stake, and the atmosphere is strong. It is a pity that in the coming pages few scenes manage to invite this level of engagement.

I have been wondering a lot about the reasons for this, and I have come up with two: the first is the dialogue technique. A dialogue has to be lifelike; the reader cannot feel that it is scripted. A dialogue needs space, and cannot be too condensed. A cartoonist friend of mine says that writing the text is the most difficult part of making comics.

The second element that I think is essential for a graphic biography to work is the ability to convey life as a process. The way I see it, biography portrays life as a series of choices: nothing is decided in advance. Biography also shows the situations in which those choices are made (or are not made). I often felt that Kleist’s narrative is hesitant to show Samia from the inside: her thoughts and feelings are narrated by works (by the fictionalized Facebook posts), but are rarely shown or dramatized with the tools of comics. Without this, the connection is harder to establish, and life no longer seems to be a random process. Although throughout the story the reader knows that the character of Samia will die, Samia herself does not know it. For her, life is a flow, it is open-ended – I miss more scenes like the above described ones, which convey this experience. 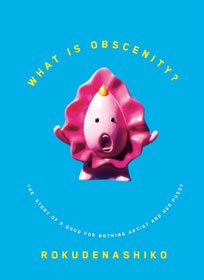 What Is Obscenity? The Story of a Good for Nothing Artist and Her Pussy 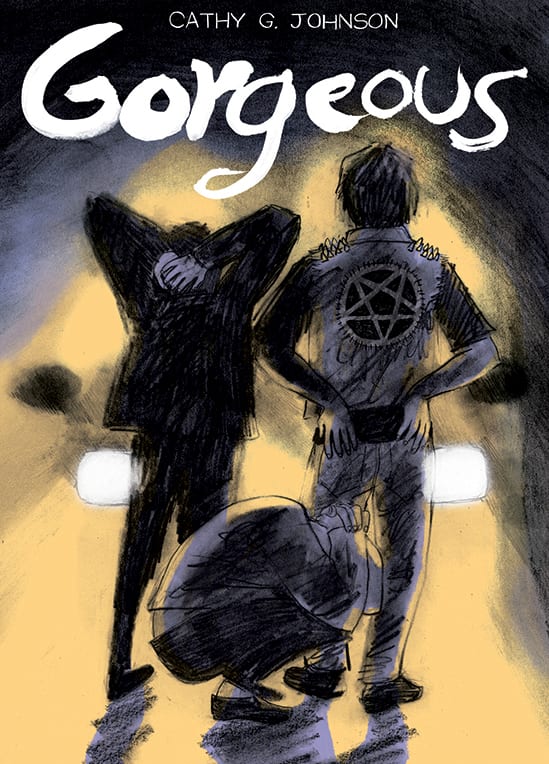