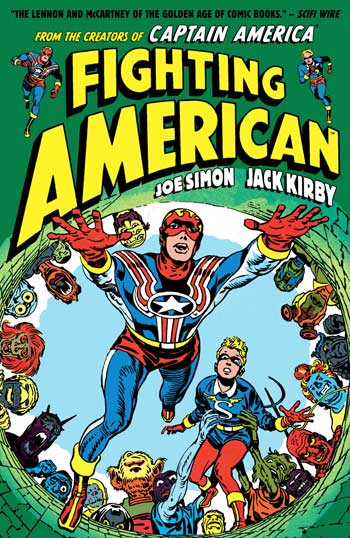 We are pleased to present an exclusive preview of Titan's new edition of Fighting American (out today) by Joe Simon and Jack Kirby, which includes a new introduction by Joe Simon and previously unpublished art. It's great to see these stories in print again. Harry Mendryk has written quite a bit, and quite well, about this work on his blog at the Kirby Museum site.

A little context on this work: Returning to New York from Europe in 1946, Jack Kirby was sobered by his experiences and determined to continue in comics. He and his longtime collaborator Joe Simon linked up again and worked first for Harvey, with Stuntman, and then Prize/Crestwood with a tremendous amount of titles, including 1947’s Young Romance, which gave birth to the romance genre in comics and enjoyed great success. By this time, Simon and Kirby was a studio with a vision, employing artists like Mort Meskin, who added a rough texture to the Kirby language, and Bill Draut, who smoothed it out. From the late 1940s to 1955 the studio moved fast and hard through crime, western (Bulls-Eye, 1954), and sci-fi (Black Magic, 1950). They even produced a dream comic led by Meskin (The Strange World of Your Dreams, 1952) and experimented with fads (Captain 3-D, 1953). Perhaps their three best titles in this period are a war-memoir comic called Foxhole (1954), the great western epic Boy’s Ranch (1950), and today's subject, Fighting American (1954).

Fighting American, first published by Prize Publications, was Simon and Kirby’s Cold War parody of their own Captain America, in which they still had some stake—though how much, and when they realized that, is a little unclear. In any case, Captain America was coming in and out of print at the time, as heroes were on the wane, and it's a good poke of comics itself and their own hero in particular. Its mix of politics, superheroics, and absurdity is a step past the pair’s earlier hero work, but jibes with Kirby’s great love of humor/adventure pioneer Roy Crane. While the content might be satire, the action is not, and the studio kept it hopping. The gags in Fighting American might have been a bit heavy handed but it pops with energy and fun.

Fighting American was reprinted once in the 1960s by Harvey, and then again in 1989 by Marvel, with art, according to Mendryk, badly obscured. It was also included in last year's Simon and Kirby Superheroes volume, also from Titan.

So, here's a new edition, with carefully restored art, and another piece of the great Simon and Kirby puzzle fixed firmly in place.

All images copyright Joe Simon and Estate of Jack Kirby. Used by permission.

All images copyright Joe Simon and Estate of Jack Kirby. Used by permission. 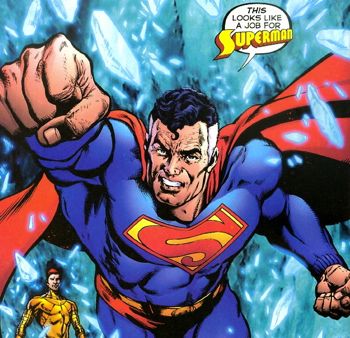 Is This Crisis Infinite or Final?