This morning we have an exclusive preview of Joe Simon and Jack Kirby's Fighting American. As Dan writes in his introduction to the excerpt, Fighting American was "Simon and Kirby’s Cold War parody of their own Captain America, in which they still had some stake—though how much, and when they realized that, is a little unclear."

And Joe McCulloch has his report on the week in comics, as always. Despite the Memorial Day holiday, comics shops should be selling new titles today, but some stores may be waiting until tomorrow.

There probably isn't a comic book store in North America that isn't anxiously awaiting August 31, after yesterday's announcement about changes at DC Comics—namely, a "historic renumbering of the entire DC Universe line of comic books with 52 first issues," and "day-and-date digital publishing for all these ongoing titles, making DC Comics the first of the two major American publishers to release all of its superhero comic book titles digitally the same day as in print."

This is potentially a very big deal, and all of the usual suspects have commentary on the announcement. Tom Spurgeon's initial reaction: "This sounds completely idiotic." The prominent retailer (and one of Spurgeon's frequent debate opponents) Brian Hibbs, on the other hand, believes that it is "FUCKING insane." Hibbs doubts that the market can handle a move of this magnitude in the current economy. Fellow retailer Mike Sterling is similarly worried about the impact, but cautions that it is "a bit early to enter panic mode." Tim O'Neil is organizing drinking games.

And there's a lot more of course. I'll just point out a few landmarks of possible interest. JK Parkin at Robot 6 wraps things up here. TCJ columnist Sean T. Collins writes about the pros and cons, and says that "the most important question to [him] is 'Will this yield more good comics?'" [My guess: not likely.] Jim Smith ponders the same question. The Beat collects various creators' reactions on Twitter here, and an updated roundup of media speculation here. Elsewhere, Graeme McMillan catches a particularly pointed tweet from Brian Michael Bendis. That's probably enough to get you started. I am sure there will be further updates and discussion in all of the normal places, so if you want to spend a lot of time thinking and arguing about the comic book business, the next few days are going to be heaven for you.

I don't make any claims for myself as an industry analyst, but to my thinking, the "historic renumbering" of DC's superhero titles (which seems to have garnered the lion's share of commentary) isn't nearly as big a deal in the long run as the announcement that DC will be selling all of the titles digitally on the same date as their print publication. It is hard to believe that this isn't going to be a huge blow to the direct market's sales. On the other hand, this development has seemed more or less inevitable for a few years now, and while people may not have expected the switch to day-and-date digital to happen this summer, everyone knew it was coming eventually. I guess I'd say to you that if you really like your local comic store, now is the time to frequent it -- before it goes the way of your favorite local record shop. 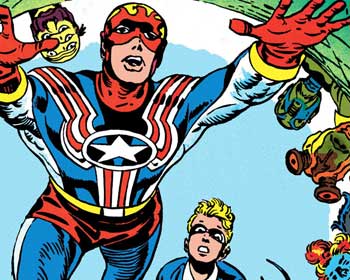 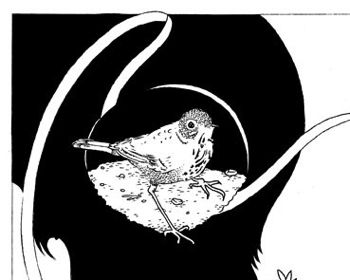 “Being Alone Is a Nice Thing for Me”: A Leslie Stein Interview