Today, Alex Dueben is here with an interview with the prominent Spanish cartoonist Rubén Pellejer, who is currently working on new Corto Maltese comics.

Tell me about Corto Maltese. What did Hugo Pratt’s comic mean to you?

There was a time when Pratt’s work was fundamental to my evolution as a cartoonist. He had qualities of many of the other American authors that I admired – Milton Caniff, Frank Robbins, Alex Toth, Noel Sickles, etc. – but he also had a simple style of line drawing that was visually very seductive.

Corto Maltese is a character complete with this same visual seduction but who also possesses great charisma. Pratt’s stories take you on a journey and make you feel like you’ve really lived the characters’ stories. That was a huge inspiration to me in my Dieter Lumpen stories.

How did you end up drawing the new series?

CONG SA is the company created by Pratt himself and his longtime colorist Patricia Zanotti. She was the one who contacted Juan Díaz Canales and asked him to write the script. Juan Díaz is a connoisseur of Pratt’s work, and he’s the one who recommended me as an artist to Patricia Zanotti. He told her about my character Dieter Lumpen, who was similar in ways to the character Corto Maltese. Juan Díaz called me up one day and offered me the job.

How do you approach drawing Corto Maltese?

In the beginning I used a very deliberate approach, by which I mean, “Which parts of Pratt’s character and drawing should I take into account, and which ones shouldn’t I?” I think that when it comes to working on the continuation of a series and not just a single book (where you can do an homage without any problem), you have to maintain some of Pratt’s elements and aspects of the character. That is essential. To do otherwise would be distancing oneself from the spirit of the work.

Do you have key influences, in terms of your style?

One is the British illustrator William Heath Robinson. He’s particularly known in the U.K. for drawings of eccentric, overcomplicated machines: similar to Rube Goldberg’s contraptions but more beautifully drawn. He also drew brilliant cartoons that captured the absurdities of daily life with a lovely, clear line. I think he’d have drawn an amazing image of a crowded New York beach.

The most recent guest on Virtual Memories is David Lloyd.

—Commentary. Mike Peterson, who has begun writing his "Comic Strip of the Day" feature for The Daily Cartoonist, brings up an interesting but key point about the most recent Jeff Danziger controversy, in which the cartoonist apologized for his depiction of Sarah Huckabee Sanders: the cartoon never actually even ran. 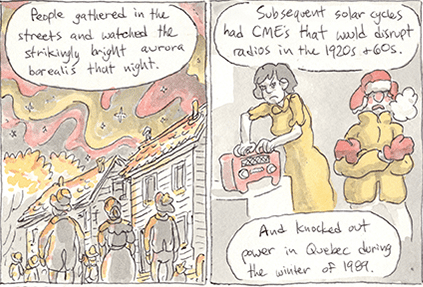