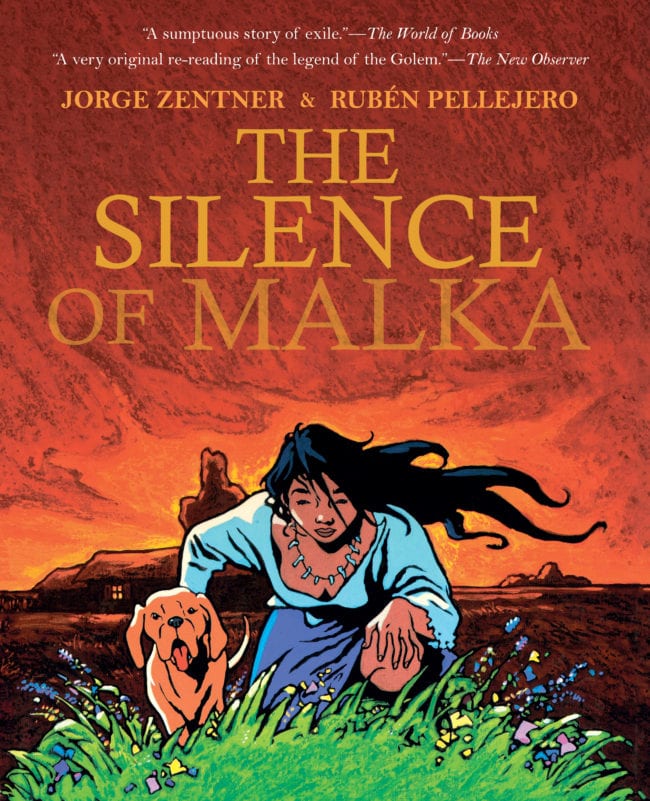 Rubén Pellejero has long been one of Spain’s great comics artists for his work on Historias de Barcelona, The Summer of Irreverence, Rain Wolf, and others. Today he, along with writer Juan Díaz Canales, is making the new adventures of one of comics' greatest characters, Hugo Pratt’s Corto Maltese.

Pellejero is likely best known for his collaborations with the Argentinian writer Jorge Zentner. IDW’s EuroComics imprint published The Adventures of Dieter Lumpen in 2016, which collected all of the short comics and graphic novels they made of the character in one volume. This summer EuroComics is publishing The Silence of Malka, the duo’s award winning graphic novel. In 1997 the book was one of two winners of the Best Album at the Angoulême International Comics Festival. Le Silence de Malka is a story about Ashkenazi Jews who have fled to Argentina in the late 19th Century. It’s about religion and mysticism, about battling nature in a new world. It’s a story of a golem and confronting the modern world told with perhaps Pellejero’s best color work.

Thanks to Katie LaBarbera who translated the questions and answers, and made the interview possible. - Alex Dueben

You had been a professional artist for more than a decade before you became a cartoonist. What made you want to be a cartoonist? How did you end up working in comics initially?

I studied commercial drawing and planned to do that as a career. But when I was 17 years old I joined a studio that worked on advertising as well as comics for agencies that worked overseas, Italy, England, etc. That got me interested in comics and got me thinking that maybe I could earn a living drawing comics, too. I drew comics for Italy (Blitz, Monello, Superglub), England (the Flesh series in the magazine 2000AD), and I did illustrations of children’s classics for Sweden.

I don’t think I’ve drawn a lot of historical stories. It happens that many of my books have a historical background or historical elements, but in general I’ve done more in the realm of fiction and adventure than history. History as the foundation for a plot interests me more than just a faithful description of an historical event. In general my books take many different directions. 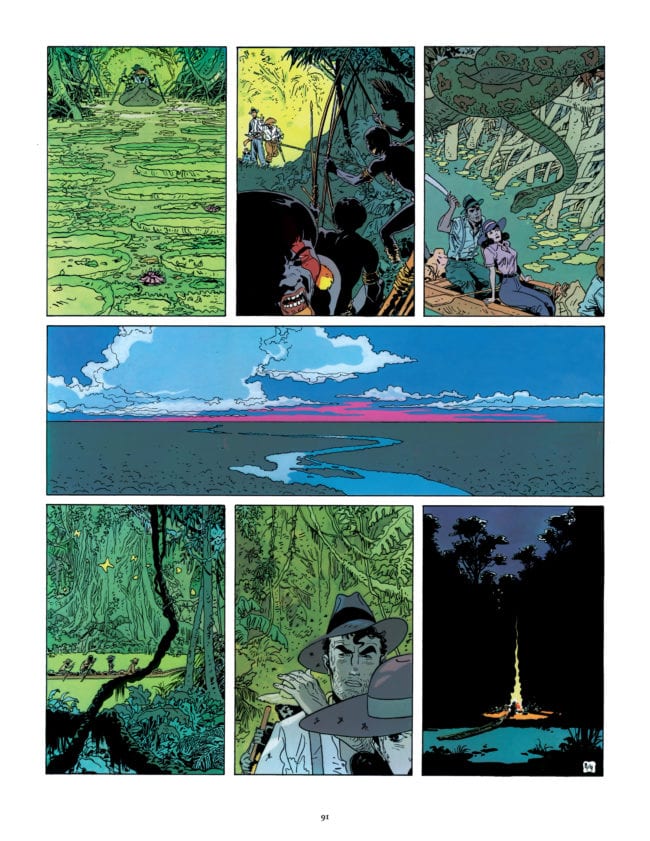 How did you end up meeting and collaborating with Jorge Zentner?

We met at Norma Editorial in Barcelona. At that time I was publishing Histories de Barcelona. I didn’t have time to write my own scripts for that series, so the editor told me to find a writer for it. At that very moment Jorge Zentner was looking for an artist to collaborate with. And right there at Norma we met each other, went out for coffee, and that’s how it all began.

Was Dieter Lumpen the first project the two of you did together?

No. Before that we worked on Las Memorias de Monsieur Griffaton (The Memoirs of Monsieur Griffaton) and FM: En frequencia modelada (FM: Frequency Modulation), as well as several short stories for Norma Editorial’s CIMOC magazine.

El Silencio de Malka is being published in English for the first time. Dean Mullaney told me that he asked you which of your books you’d like to most see in English and Malka was first on your list. What was it about this story by Zentner that made you want to draw it?

Zentner was thinking of an Argentinian artist for this story, since it takes place in the Pampas, but I asked to read it, I liked it a lot, and I saw in it a good opportunity to make a change in my style, to try painting directly on my line art, as opposed to the “blue line” method common at the time, which would allow me the possibility of using other graphical as well as narrative techniques.

Jorge Zentner’s version of the Golem story, which mixes magical elements, traditional legends, and violence, struck me as very evocative. I also really liked being able to draw rural landscapes and horizons and where there weren’t even any buildings; where everything rests on the strength of the characters and their story. 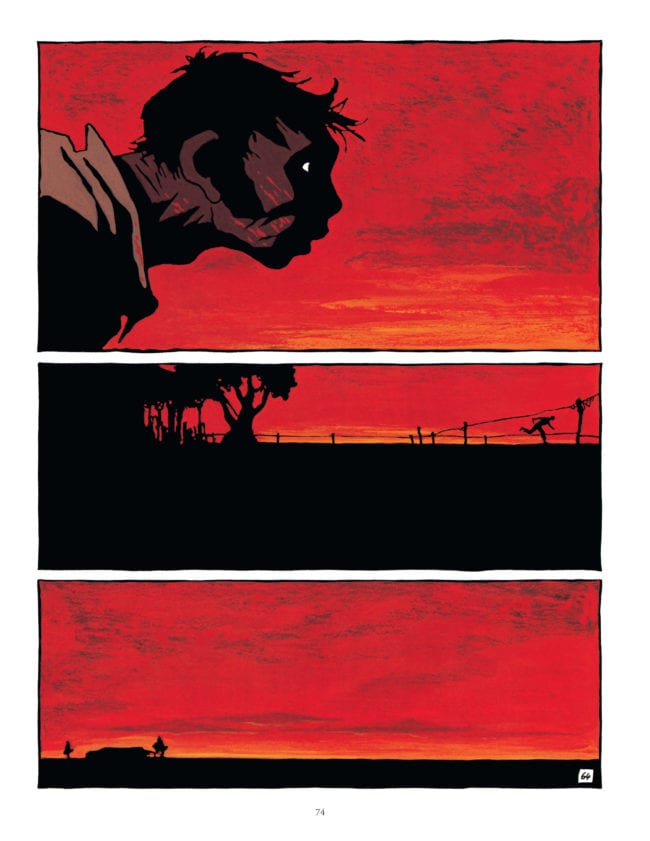 What was the biggest challenge you faced drawing the book?

Precisely the fact that I’ve never been to Argentina. When I asked Jorge about the countryside he knew so well, he told me, “In the Pampas there’s nothing, only a little tree here and another one over there. There’s just the horizon.” That was very interesting to hear, but I asked myself, “But what do I draw if that’s all there is?” Drawing an environment with hardly anything in it to grab on to is very difficult. But that challenge is exactly what interested me. So I came up with a mixed media technique using gouache and crayon, in which the countryside had value in and of itself.

Creating the characters was also a real challenge, with the Golem as a special character. The whole narrative was also a challenge; I used a lot of staging and composition concepts that I hadn’t used before in my drawing.

Tell me about Corto Maltese. What did Hugo Pratt’s comic mean to you?

There was a time when Pratt’s work was fundamental to my evolution as a cartoonist. He had qualities of many of the other American authors that I admired – Milton Caniff, Frank Robbins, Alex Toth, Noel Sickles, etc. – but he also had a simple style of line drawing that was visually very seductive.

Corto Maltese is a character complete with this same visual seduction but who also possesses great charisma. Pratt’s stories take you on a journey and make you feel like you’ve really lived the characters’ stories. That was a huge inspiration to me in my Dieter Lumpen stories.

How did you end up drawing the new series?

CONG SA is the company created by Pratt himself and his longtime colorist Patricia Zanotti. She was the one who contacted Juan Díaz Canales and asked him to write the script. Juan Díaz is a connoisseur of Pratt’s work, and he’s the one who recommended me as an artist to Patricia Zanotti. He told her about my character Dieter Lumpen, who was similar in ways to the character Corto Maltese. Juan Díaz called me up one day and offered me the job.

How do you approach drawing Corto Maltese?

In the beginning I used a very deliberate approach, by which I mean, “Which parts of Pratt’s character and drawing should I take into account, and which ones shouldn’t I?” I think that when it comes to working on the continuation of a series and not just a single book (where you can do an homage without any problem), you have to maintain some of Pratt’s elements and aspects of the character. That is essential. To do otherwise would be distancing oneself from the spirit of the work.

In Corto Maltese I draw the pencils like I usually do for my stories. There’s not much difference. Drawing without a lot of detail but very well thought-out on a narrative level. I then do the inking very loosely. In that respect it’s a lot different as compared with my other works, which are graphically more sophisticated.

How do you typically work and has your process changed much over the years?

There are always a few preliminary conversations with the writer. That’s necessary for taking the pulse of the story that I’ll be drawing. After I get the script and do an initial reading, I make a storyboard that helps me clarify the layout of the page, including the scene for each panel. This is the most important phase for me because it’s where I visualize everything I’ll have to take into account before I start drawing. Then comes the search for reference material. In the case of Corto Maltese, Juan Díaz provided a lot. Then the pencil work that I do very loosely so that I can improvise later during the inking, giving more spontaneity to the lines. I still do the inking the analog way, let’s say the old-fashioned way, directly onto the paper. I do the coloring myself, but I do that part digitally.

The process has changed a lot recently since in the digital era many artists, mostly the young ones, work directly on a tablet. This gives their work an endless amount of new possibilities. There’s a more controlled relationship between the work and the final project. At any rate, I like to have the original in black and white in my hands. 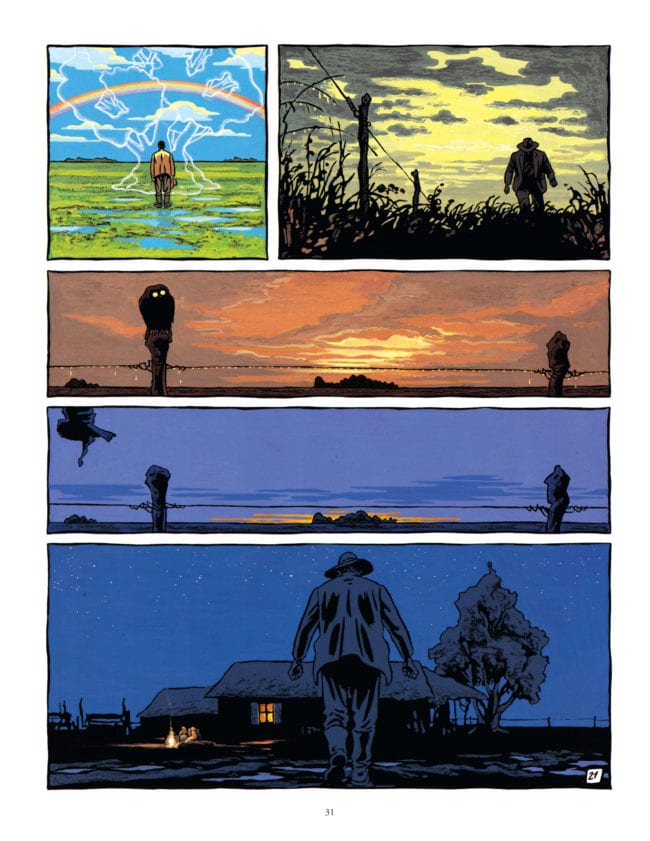 I would be remiss if I didn’t ask you about your use of color. So many people have spoken about the way you use black, but Malka especially has such striking color. How do you decide on the right color palette for stories?

I look at every story I draw in a different way. Each has their own visual reading. I have fun with that. And color is a very important characteristic in a story, often essential, as color also has a narrative function. It creates atmosphere, suggests emotional states, etc. In Malka, for example, the color red has a huge importance for the dramatic scenes in which the story develops, ochre for the soil of the Pampas and the Golem itself, green for the meadows and to create a certain feeling of joy, yellow for the moments when sickness takes hold of the characters, blue for the immense skies of the Pampas, the dream states, etc.

And in Malka I wanted to play with that use of color. For example: burst into each chapter with a small panel in black and white that contrasts with the color illustration that starts it. 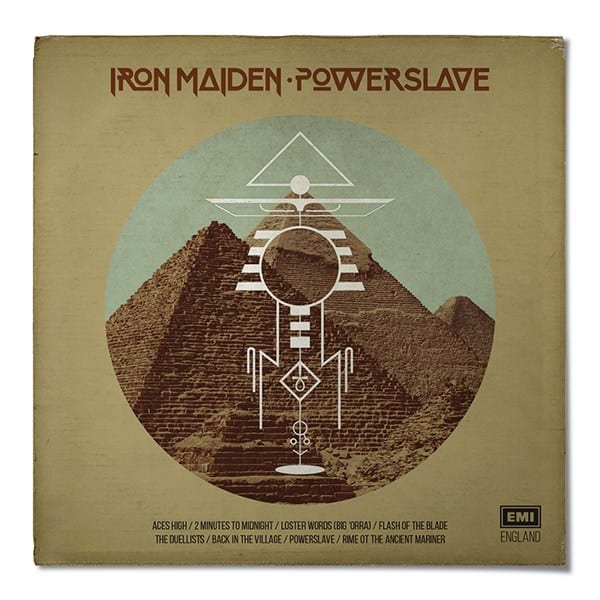 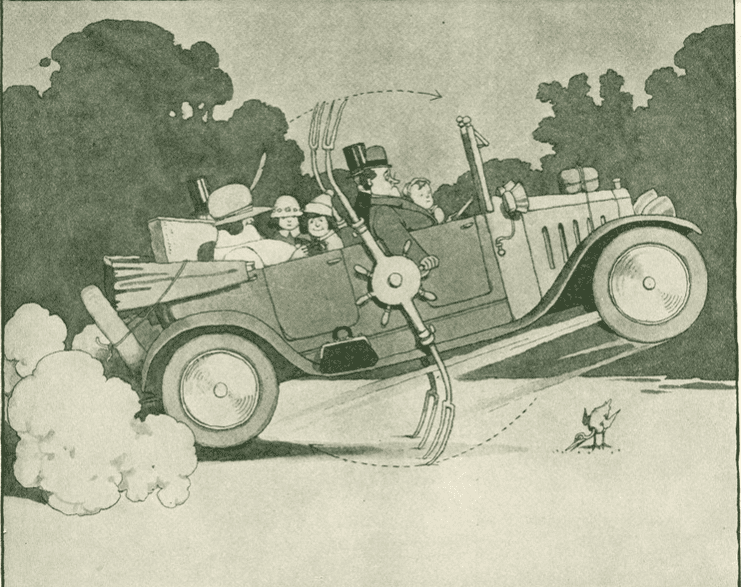