Today on the site, Frank M. Young is here with an interview he conducted nine years ago with the late Harvey Pekar, among the last the writer gave. In it, they discuss collaboration, Pekar's problems with Israel, and how the American Splendor movie affected his career.

How do you communicate your ideas to the various artists that illustrate your stories? Do you give them a lot of notes?

Yeah, well, I put notes on paper, and then I’ll call them up. I talk to everybody on the phone. I’ll go over the story and tell them what I’m looking for. And I always say, “Look, if you run across something that you can’t understand, or if it’s illegible, just call me. Or I’ll call you in a couple of weeks if I don’t hear from you, just to make sure everything is fine,” you know?

That’s an important part of my communication that a lot of people don’t see. And if it’s a real long piece, I’m dealing with somebody maybe quite a few times. Like if it’s a graphic novel. I’m working on this graphic novel now about how I lost faith in Israel [Not the Israel My Parents Promised Me, published posthumously by Hill & Wang, 2014]. You know, I’m Jewish, and I write about when I was a little kid, and all I heard was Israel’s side of the story from everybody. Everybody in my family, and my friends, and their family... You just heard one side of the story. And then if you believe you’re one of God’s chosen people, that’ll settle things for you, sure.

As time went on, and I became independent, and I formed my own ideas, I got pretty upset with Israel. I’m at a point now where I think that their foreign policy is self-defeating. All this for nothing, you know. First of all, the Arabs have a beef, but nobody wants to hear about it. Which was that the whole Middle East used to be under Turkish control and the Turkish empire. But the Turks were stripped of all that Arab territory after the First World War. Provisions were made for everyplace else, like Iraq, Syria, Lebanon, and Jordan. It didn’t happen overnight, but there were provisions made for self-government. But in Israel’s case, everybody was hyping the hell out of their position, and talking it up... politicians and everything like that. So the British had a mandate at the League of Nations: “take care of Israel until there could be a vote on it in 1947 in the UN.” And instead, war broke out in ’48, and the Jews won the war. People around here, in the United States, where Arabs were mistrusted, as they still are today. People said, “Well, good for the Jews.”

The Palestinian Arabs got treated worse than any of the other Arabs. They didn’t even have a stab at self-government That was one of my points; that [point] takes a long time to develop. And then their use of force… it’s one thing if you use force and you really gain something. I’m not for going out and having a war, or anything like that, but if you’re going to have a war, it should get you something. And these wars that Israel’s fighting, they’re going to have to keep on fighting them as long as they exist, unless they change their policy. I went into a lot of detail, and I did a lot of research on it. Then I sent it into the editor, and the editor wanted me to restructure it, and in the mean time I got together with a real good illustrator. His name is JT Waldman.

Also, Joe Decie joins the ranks of the artists who have contributed to our Cartoonist's Diary feature. Here is his Day One.

The network was instrumental in the release of graphic novelist Ramón Nsé Esono Ebalé who was imprisoned in Equatorial Guinea on bogus counterfeiting charges because of his criticism of the country’s president and government.

CRNI tracks censorship, fines, penalties and physical intimidation (including of family members), assault, imprisonment, and even assassinations. Once a threat is detected, CRNI often partners with other human rights organisations to maximise the pressure and impact of a campaign to protect the cartoonist and confront those who seek to censor political cartoonists.

Cartoonists are frequently targeted by authoritarian governments and lack the protection offered by unions or large media organisations, therefore external support is crucial.

—At The New York Review of Books, Joel Smith writes about Saul Steinberg's The Labyrinth.

The Labyrinth, a collection of drawings Saul Steinberg made between 1954 and 1960, reached bookstores too late for the 1960 Christmas market. Its consequently dismal sales gave the forty-six-year-old artist his first dose of public indifference. A Romanian by birth who had found overnight success at cartooning in 1930s Milan, Steinberg had arrived in New York in 1942, preceded by a run of mailed-in work for The New Yorker that laid the ground for instant and enduring American acclaim. Irritated though he was by his book’s flat reception, he might really have been more in the mood to ponder a flop (which he said left him feeling “as flattered as Stendhal”) than to add another conventional success to his total. “I admire more and more people’s literary qualities,” he would write to his friend Aldo Buzzi in 1962. “I mean the possibility of recounting a fact or making a true and proper observation. Most people transform things that happen to them into things read in the newspaper. Those who don’t know how to tell things are scary.” 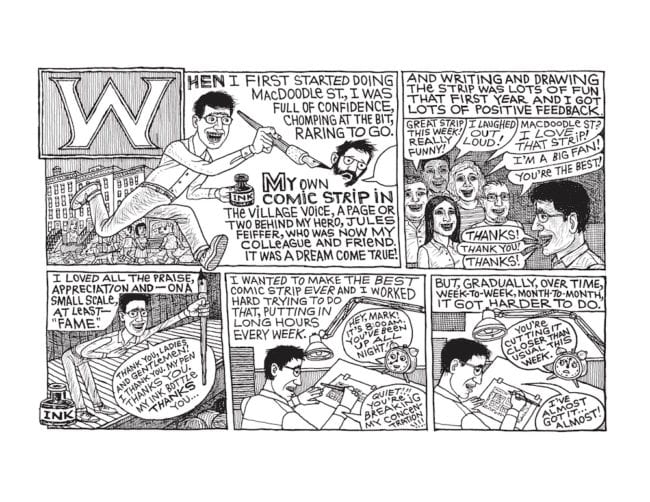 —As reported by Food & Wine, Bazooka Bubble Gum is bringing back the Bazooka Joe comics.

“A few years back, we re-launched Bazooka Bubble Gum, reinvigorating the brand for kids who may not have been familiar with the eye-patch wearing Bazooka Joe or the brand’s place in America’s pop culture landscape,” Matt Nathanson, Bazooka Brand Manager, told me. “Yet even as Bazooka continued to thrive with its new look, we have never stopped hearing from our passionate consumers who longed for the Bazooka bubble gum of their past. Those classic Bazooka Joe comics clearly have a special place in the hearts and memories of so many fans. We are always listening to our fan, and are incredibly excited to bring back the Bazooka fans remember!”

Nathanson says that a lot of effort went into choosing which comics to bring back as well. “We began by diving into the Topps vault to find the original Bazooka Joe & His Gang comics… Believe it or not, some of these assets hadn’t been seen for decades,” he explained. “We selected 48 of the best comics from the 1970s and 1980s—all with Bazooka Joe’s trademark (and maybe a bit off-beat) sense of humor — to include in our new throwback package.” 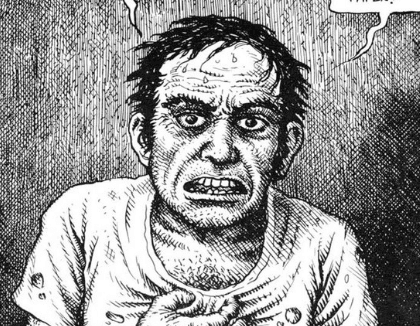 “There Are Just Some Times When You Can’t Deal”: A Previously Unpublished Interview with Harvey Pekar 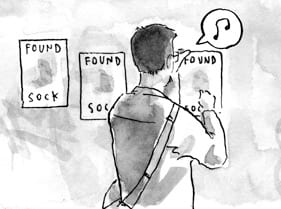