If there's one complaint we here at TCJ.com hear more than any other, it's what happened to Dapper Dan's Super-Movies reviews? The answer, of course, is that Dan had a kid, which means he didn't spend a whole lot of the summer in theaters. But never fear, because the great R. Fiore has you covered, and uses his new Funnybook Roulette to pin down The Dark Knight Rises:

In thinking over my dissatisfaction with this particular moviegoing experience I am of two minds. On the one hand the leaden seriousness these superhero movies (and this “franchise” in particular) coat themselves in detracts from their enjoyability. On the other hand I can’t say for sure that their makers’ belief that this factor is a key element in their success with people other than me is wrong. I feel my position is further eroded by the fact that they did get me into the theater. As I am one of those people who will go to some of the superhero movies but not all of them, a key demographic for the success of one of these movies, it is difficult for me to argue that the strategy didn’t “work.”

—Our own Chris Mautner takes to the pixels of Robot 6 to list and describe his six favorite Cul de Sac characters. If you know Chris, you know he does this with anything (six favorite Portuguese cartoonists, six favorite TCJ.com commenters, six favorite clerks at Pathmark, etc.), but usually he keeps his findings to himself, so this public disclosure is a rare privilege for you and me.

—I don't believe we've previously mentioned the fact that our own Sean T. Collins has ventured into the world of genuinely viral internet stardom for his recent comic-strip collaboration with Andrew White, but you can see in the Huffington Post that it's true.

—Pappy, one of the best internet excavators of old comics around, brings out an old Spirit story skewering Al Capp, Chester Gould, and Harold Gray, and speculates a bit about the motivation for its creation.

—It looks like the A.V. Club is taking their patented TV-recapping strategy and applying it to comic-book series, starting with The Walking Dead. I am still processing this.

—Graeme McMillan ponders what it means that Image is looked on as a great place for up-and-coming cartoonists to make their name, and as a great place for cartoonists to publish their creater-owned series after having made it, and wonders why anyone is going to DC and Marvel for work at all. Obviously the situation is more complicated than that (and less -- one obvious factor not mentioned in his piece: money), which McMillan acknowledges, but I do think he may be pointing to a real upcoming problems for the Big Two. If the Direct Market falters, what will DC and Marvel be able to offer their creators that the other smaller publishers won't?

—Finally, there are only a few days left for Floating World to raise the necessary funds for their planned experimental arts and comics festival in Portland, The Projects. Yay, Kickstarter! (I'm the nice one.) 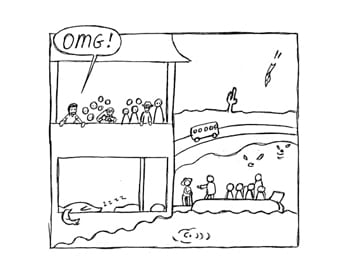 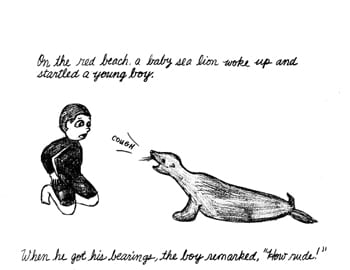