Hi there, today on the site is RJ Casey's interview with Carel Moiseiwitsch, who is known to comics audiences for her work in Twisted Sisters, Wimmen's Comix, and Weirdo, among other publications.

In Twisted Sisters 2, you have a story called “Impasse”. The story is set in Morocco …

Yes, I spent quite a long time in Morocco. I was very influenced by the French bande dessinée after I spent some time in Paris. I loved the French cartoonists’ work and thought their drawings were so incredible. I was very influenced by the French graphic artists. Someone said to me, “Why don’t you just do an autobiographical piece, since you never do that.” I used to just find stories and newspapers and things like that. But I thought, OK then, so I did that one.

Was that story done with etching or some sort of stamp-making?

I was using scratchboard with razors.

That style seemed to be way more popular amongst artist in the ’80s and ‘90s than it is now. You did it so well, and Penny Van Horn, but you don’t see it too much anymore.

Right. It’s seemed to have fallen out of style. One of the reasons I don’t use that style anymore is because I can’t get the good scratchboard anymore. I used to get that from England and it was really good. I can’t get the right ink because it’s all acrylic based now. It just doesn’t look right, so I had to give it up and I was really good at it. I tried looking for all the materials in England. I tried ordering it. It never worked, so I just gave up. It needs to come back! It’s a good medium.

In “Impasse”, the story’s all about anxiety and issues regarding commitment. Are these things that you still deal with or suffer from?

Good question. That certainly is true of me. I finally met the guy who is able to withstand my anxiety and I’m still with him. [Laughs] He’s a very brave man.

Does this anxiety stem from art or …

Just life in general. The art scene has contributed to it though, especially in Vancouver. I just couldn’t stand it. And I’m also always involved politically, so sometimes I get a lot of harassment for that. I still do my own work, but I stopped trying to show it and just stopped … just stopped.

Did you ever feel like you were part of an art scene? Or always outside those scenes?

I was somewhat involved. Not that involved, but somewhat. I really liked that I was welcomed to comics. And those women and guys, I liked them. It was really fun to get involved, because I felt a bit rejected after trying to make it in Vancouver. In London, when I lived there again, I started to get somewhere, but my son became ill, so I came back to help him. I lost that momentum. I’m really just a loner, though. An outsider.

I don't usually link to PR, but Moebius news is a little different for me, so here's some good news.

And congrats to our contributor and friend, Dash Shaw, on a string of premiers for his excellent film My Entire High School Sinking Into the Sea. Check this site for dates in a city near you. 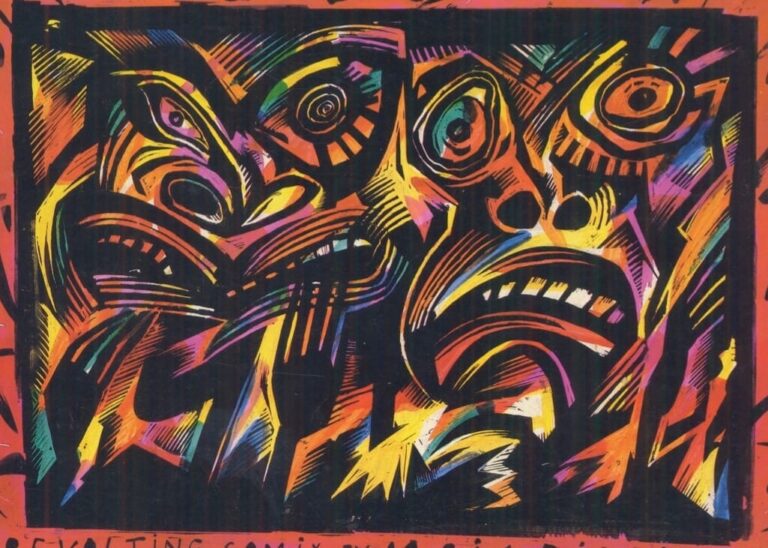 Not with a Whimper