Milton Glaser died on June 26, 2020, on his 91st birthday in New York City. Arguably the most important graphic designer of the second half of the 20th century, Milton was New York: from his ubiquitous “I ❤ NY” logo he designed for the state as a pro-bono job in 1977; to his Brooklyn Brewery logo peering out of every bodega window; on every newsstand with New York magazine; take the 6 train to Astor Place and you are greeted by his installation; on it goes. After the 9-11 attacks, he modified his logo to affirm, “I ♥ NY More Than Ever,” which first appeared on the cover of the New York Daily News and soon thereafter on posters throughout the city.

Milton was my uncle, or so he always referred to himself, and me his nephew, as that summed up our relationship. In reality, he was my mother’s first cousin. His father was my maternal grandmother’s brother. Oddly we were twice related, as his mother’s sister married my maternal grandfather’s brother so that Milton and his wife Shirley would attend family affairs for both my grandmother’s and grandfather’s families. When he was once asked what our relationship was, he said “We’re Schmoyguls.”

Milton grew up in the North East Bronx, a block from where I did, although he was long gone by the time I arrived. He had rheumatic fever as a child and spent much time bedbound. It was my Uncle Saul who arrived bedside one day with a paper bag, claiming to have a ‘boyd” inside (in his thick Hungarian/New Yorkese accent) and instead took out a crayon and drew a bird on the bag. For Milton this was magical and transformative; for Saul, it was the means for bragging rights to claim credit for Milton’s success throughout his life.

I first heard of Milton when I was 4. My mother handed me a small blue pad and a crayon, and I proceeded to draw a flower, to which she responded, “That’s BEE-UU-TEE-FULL!” I recall liking that response. A short time later I was babysat by my grandmother in a park in the Bronx. I thought I would get a repeat performance, and so I took out the pad and the crayon and drew a flower. My grandmother said, “Ah, another Miltie!”

Virtually at every family get together “Miltie” was discussed, as he was the most successful member of our family. I received two children’s books from him: If Apples Had Teeth, which he created with Shirley, and The Smallest Elephant in the World, both of which were inscribed to me. Too young to know what an inscription was, I thought the printed books were all dedicated to me.

Sadly, I finally met Milton and Shirley at age 8 at his mother’s, my (great) Aunt Eleanor’s Shiva. His dad, my (great) Uncle Eugene, ran the Allerton Drycleaners, where my sister, Susan, occasionally helped out, and they lived a few blocks over. Milton arrived with Shirley and a few friends, and shortly thereafter my family urged him to draw a portrait of me. He politely tried to decline, stating “I’m not good at likenesses,” to no avail. Even at 8, I knew this was wrong, but he acquiesced, and I think you can see both our discomfort in the result.

Milton and Shirley attended my Bar Mitzvah and invited me to spend a week with them in their Woodstock home. That visit transformed my life, as I caught a glimpse of what life could be like outside of the Bronx.

The following summer, 1966, at age 14, Milton asked me to come to Push Pin Studios to “work.” My duties were to pick up breakfast food... My first attempt was fudge cookies. Milton took me downstairs to the bakery and said, “Let me introduce you to a croissant.” Also, to shoot Photostats and develop them by hand in the darkroom, to cut Cellotact, a transparent colored film, to mount artwork for presentation, and make deliveries. I was paid $25 in cash, a small fortune for a junior high schooler.

It was a rarified environment. I was surrounded by the most important designers and illustrators of the day: Push Pin co-founder Seymour Chwast, James McMullan, Tim Lewis, Vincent Ceci and Jason McWhator. Occasionally, Milton would put down his pencil and pick up a banjo, and studio manager George Levitt would pick up a guitar and the studio mates would harmonize on folk songs.

One day Milton called over the studio’s assistant, Brian. While I watched, Milton drew a line drawing of a box, explaining it was a light-box. He then drew an American flag on the top of the box, telling Brian to cut the colors out of Cellotac and to divide the plexiglass into the flag pattern. All of this took less than five minutes.

Brian spent the better part of the week creating the flag, which was then photographed and used for the inaugural album for the rock group “The Electric Flag.” The cover showed a glowing American flag, thus conveying visually the name of the band. When I saw the album, it only had Milton’s name listed for the credit, which I couldn’t understand. In my adolescent mind, it was Brian who had done all the work. It was only years later, that I finally understood. It was Milton’s concept and art direction. Brian was simply acting as his hands. I was witnessing genius at work.

I worked there the following summer as well and went to the same school as Milton, the High School of Music and Art, in Harlem. In the fall, word came down through my mom that Milton wanted me to come work for him after school. So I did what any teenager in the late 60s would do: I never responded and played in rock and roll bands for the next 15 or so years.

My mom bought me Milton’s groundbreaking 1973 tome Graphic Design as a present, perhaps to inspire me to redirect my energies back to where they belonged. I am still bemused that she covered it with a homemade brown paper bag book jacket, as she had one with all my school textbooks, and wrote in cursive on the cover the “Milton Glaser.”

It wasn’t until I was nearing 30 and decided it was time to get serious, that I went back to school to study design, in Southern California. Shortly after graduating, I returned to New York, wife and baby in tow, and landed a job designing mass-market book covers at New American Library. It was only then that I mustered the courage to contact Milton and I showed him my godawful portfolio. He gave me a few pointers and suggested I take his Design and Personality class at the School of Visual Arts, which he taught for 42 years, before moving on to teach in the MFA. I attended two semesters, and it was as transformative as the studio had been. Milton was the greatest teacher I had ever had. His teachings were multilayered; they were at once psychological, socially responsible, spiritual, indeed, even mystical. For one such assignment, we were asked to keep track of everything we ate for a week. We then put the list in a hat and they were distributed randomly among the class. No one in the knew each other. We were asked to then draw a portrait of the person whose diet we had. Remarkably, every person in the class was clearly identifiable. Milton stated the point of the assignment: to trust your intuition.

In 1976, he redesigned the DC comics logo. According to Milton, he was inspired by Captain America’s shield from rival Marvel. Glaser also designed the New York DC Time/Warner headquarters lobby, including a life-sized statue of Clark Kent that sat in the reception waiting area. I asked him about his earliest comic influences and he would simply state “Disney.” He also said he became interested in patterns as a small boy looking close up at Benday patterns in comic books. This, as well as designing rugs, led to his latter-day work of layered patterns created on the computer.

In 2009 he was awarded the National Medal of The Arts by President Obama, the first graphic designer to do so. Not bad for a boy from the Bronx. I told him he made our family proud.

I was the extremely fortunate beneficiary of his infinite wisdom, encouragement and extreme generosity over the years. No one had a more profound influence and impact on my life, and as evidenced by the outpouring of tributes on social media, on several thousands of others across the world. Giants walked among us.

For the record, I never once called him “Uncle Miltie,” although he did call me “Stevie.” 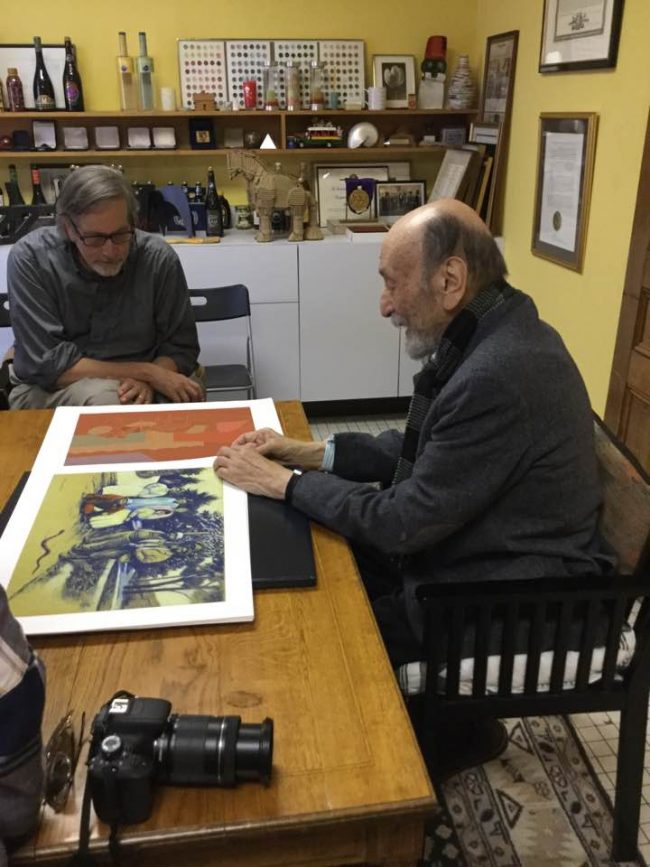 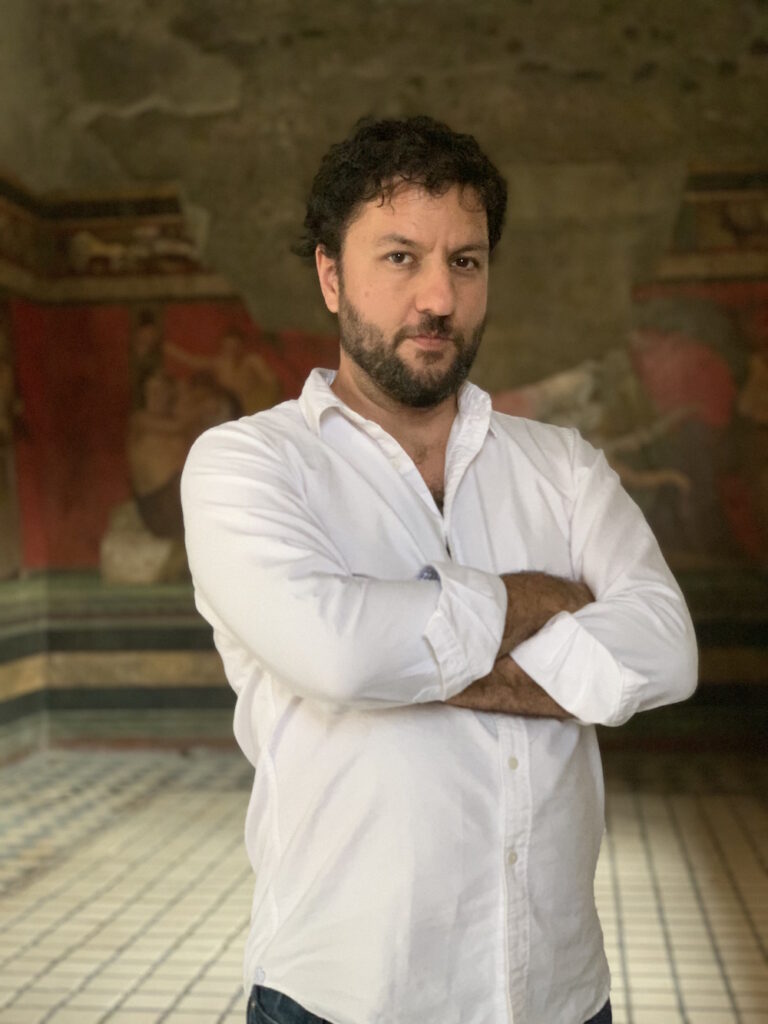 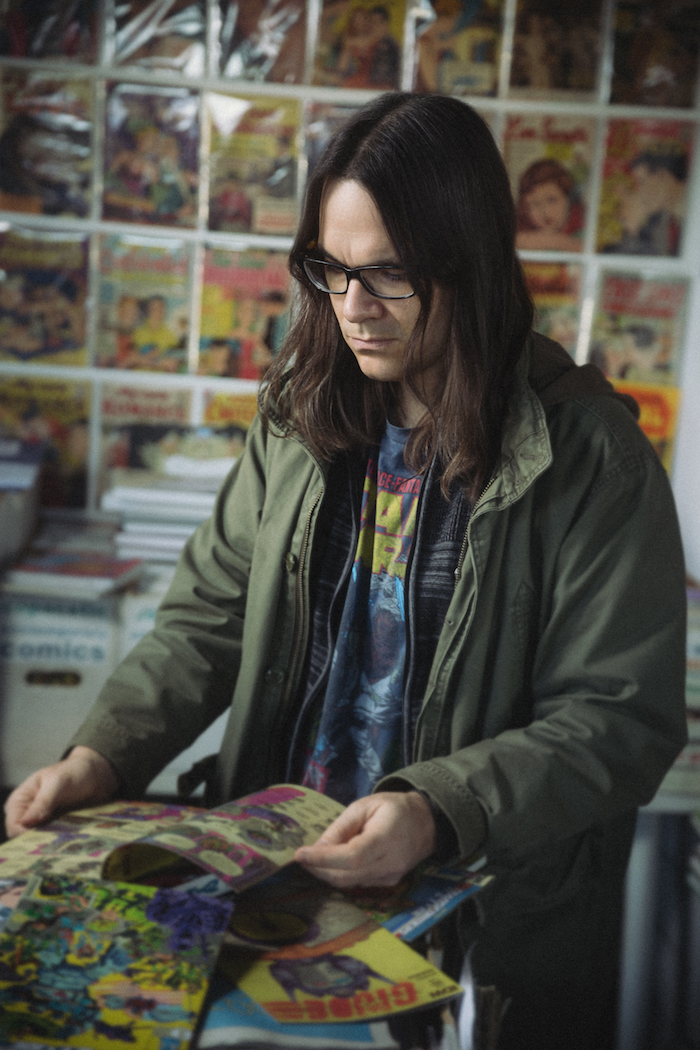 “As Far As Career Goes, It Was One Option”: The Tom Scioli Interview