Right now we’re all anxiety and stressed out about the state of the world, about the state of business, and well, everything. We wanted to check in with people in comics to talk about how they’re doing, ways they’ve found to cope with this situation, and just have a chance to talk. I can only speak for myself, but I appreciated the chance to talk with people and just share about our feelings and what’s stressing us out and our thoughts and concerns about what comes next.

George O’Connor has been making graphic novels (Journey into Mohawk Country, Ball Peen Hammer) and picture books (Kapow!, Uncle Bigfoot) for years, though he remains best known for The Olympians, his series of graphic novels about the Greek gods. He has a new book coming out this summer, Unrig, which is part of a new imprint from First Second Books. We Skyped recently to talk about how things look Brooklyn, preparing to release a new book when the marketing plan is constantly in flux, social media outreach, and wondering about what the future for cartoonists and studios might look like.

Just to start with possibly the hardest question, how are you doing?

I’m hesitant to say, because there can be a lot of vacillation and I know that people are hurting, but I’m doing pretty good. Unlike most comics professionals I principally make a living not off the direct market – not that bookstores are doing great right now, either – but there’s a big difference between Diamond not paying publishers and the accounting going on at the big publishers I work with. I’m a bit of an extrovert, even though I have a job that tends to be very introverted. Before this happened I probably went out four times a week at least and so my girlfriend and I were talking about how we miss bars. I have a little bit of outdoor space, this tiny balcony, so at least I can sit outside on nice days. I’m aware of the misery other people are having and I’m grateful I’m not experiencing that. 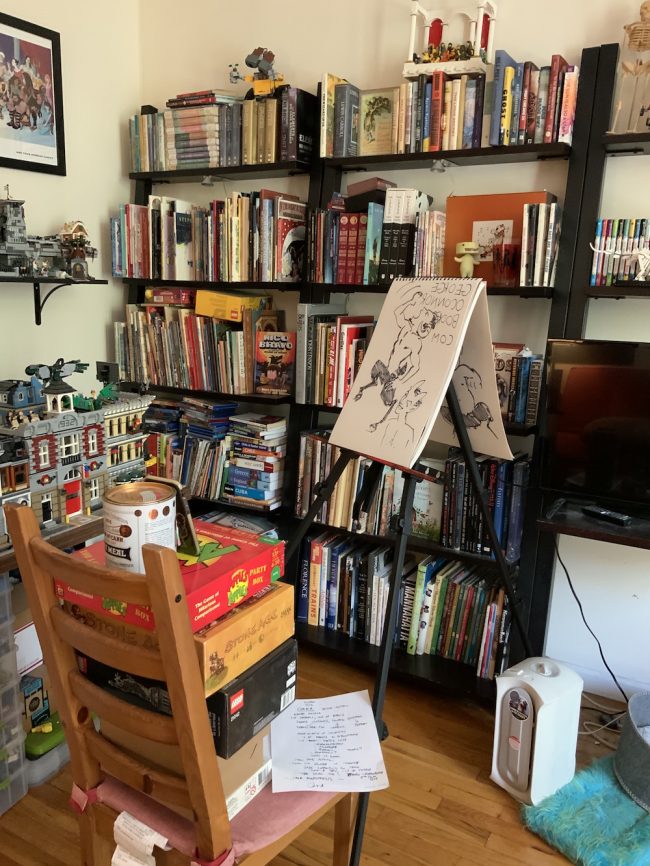 The running gag has been how cartoonists have prepared their whole lives to isolate and stay at home.

Yeah, I thought I’d be getting a tremendous amount of work done, but I’m not. I think I needed a certain amount of outside interactions – also I’m doing things that I wouldn’t be doing otherwise. I’ve been doing these daily live casts about mythology. I started doing it to help a local independent bookstore, Word, and did it for a week with them and people were really enjoying it so I kept doing it on my own Instagram. Every day I do a daily lecture. Knock on wood, this hasn’t hit me financially yet as badly as it’s hit other people. I’m trying to help out. Of course if this goes on indefinitely, we’re all going to be screwed. But for me, right now, I’m in a fairly good place to weather this.

Have you gotten any planned work done?

Olympians isn’t designated as a kids series, but the fanbase is mostly kids. A big part of my workload – and an enormous part of my income – comes from doing school visits. They pay for you to come speak at a school. If you’re traveling out of state they pay for your flight or train there. They put you up. They buy a ton of your books. It’s amazing and something a lot of cartoonists or even adult authors don’t get to do. I would have been on the road this entire month. And next. And last. [laughs] I had an overseas trip canceled. So that work I’m not doing at all. I should be writing, but I’m not. I’m getting maybe two pages a day of writing done, but rough, so the next day there’s maybe a paragraph.

In talking with cartoonists and other people, what kinds of conversations are you having?

I belong to a cartoonists studio in Gowanus. It’s primarily a social thing. I think all of us, even cartoonists, we like to go somewhere where we can interact with people. I haven’t gone for a month now. Luckily only two of us have gotten it so far and they’ve both recovered. Some people are really hurting. Some people like myself have been more fortunate. Some of the people had day jobs that don’t exist anymore. They were doing comics either as a passion project or something that paid a little but now they don’t have a venue to sell those comics so there’s some real anguish. I spend a lot of my time checking in on people. I didn’t used to spend nearly as much time texting or Facetiming. There are some people you keep a closer eye on because they’re in a rougher spot.

A lot of my friends didn’t pay rent this month. Being a cartoonist is a great job. You’re pursuing your love and a lot of people don’t get to do that, but for the most part it means that it’s very hand to mouth. Our society at least has no safety net for creatives. I live in New York where most people I know are renters and if you have a mortgage, that’s been stopped, but if you don’t pay rent, Cuomo’s answer is "well you can three months until they kick you out". But you still owe that money. If you’re already working as hard as you can just to make ends meet month to month and now you’re going to have a multi-month backlog to add onto that? It’s just ridiculous. If mortgages aren’t being collected, maybe arrest rent for a month? Society is structured towards people who made the choice to make more money. Or are born rich. [laughs]

Have you been hearing from people about the livecasts?

It’s been really helpful. I started doing it on day one or two of us being locked down in New York and at that point I was more upset then than I am now. I was very freaked out. I’m not super high risk, but I know people who are. It was terrifying. I started doing these livecasts and a lot of people responded to them. I got a lot of sweet feedback from kids – and probably more from their parents. [laughs] That’s one of the main reasons I do it. I’ll put one of these out because they helped me by giving me feedback and I want to give them something to rely on where here’s an hour where they can put their kid in front of the computer to hear about mythology. That being said, it has taken a lot of time and creative effort. It’s like putting on a performance once a day. I’m going from every day to three times a week. Plus a lot of people are doing it now. I don’t know if you’ve had this but it feels like the internet slows down mid-day because there are so many people using it. It’s been fascinating to see how people have taken to the web to do drawalongs or story times. In the nightlife scene there are a lot of people doing virtual shows. That spark that drives creative people is just coming out online. I have gotten a lot emotionally from doing these, so I think  even after we return to normal I’m going to keep doing my Geek Speak Greek as a regular thing. I never did much social media outreach but this has been a fun way to connect with fans and find new fans.

Economically obviously these aren’t going to replace school visits, but is what you present and the chance to interact with kids similar?

It does feel very similar to school visits, but that’s one of the reasons why it’s so mentally exhausting. When I do a school visit, I’m doing a performance. I’m on stage talking to kids and I have to make sure I’m behaving in a way that’s appropriate. [laughs] There’s a certain amount of effort, so I’ve always found it hard to switch gears. Back in the day if I was doing a school visit, even if it was a school in Brooklyn, I’d come back and it would take an hour or so before I could get back in a creative mode.

You mentioned being less panicked now and it does feel like we’re getting used to certain aspects of this.

It’s going to be interesting to see what stuff really sticks. I can see people wearing masks all the time. I think there’s going to be a lot more online. Will this affect big gatherings of people in the future? Whats the next big Comic-Con going to be like? Now that we have this palpable fear of disease, are you going to want to be shoulder to shoulder with a bunch of sweaty people coughing and breathing? It might really change things.

And as you said, for a lot of people, a studio was partly social, and what will that be like going forward? I’m sure some companies are rethinking working from home and how much office space they really need.

There’s been a lot of resistance to working from home and I think there’s going to be a lot more working from home going forward. I’m studio mates with Dean Haspiel and we were talking the other day about how he’s not sure the studio will come back. Some people might want to work at home. Right now there’s fourteen people but some people are pretty part timey. Some people go there to be social and I like that. I’ll probably always try to have a studio, but logistics being what they are, who knows how many people will want to. For those people struggling to pay rent, how are they going to pay rent on an extra space?

It’s still coming out. I just got an e-mail from my publisher about it yesterday. There are two sets of plans to promote it, essentially. One part was about all the magazines and online places where we’re going to promote. MacMillan/First Second have a new imprint called World Citizen Comics. I did a book with the author Daniel Newman called Unrig about how money controls the political system and the way that politicians’ votes are bought by special interest groups and corporations. It’s a problem of both sides – although one side is worse. It’s a huge imprint and Unrig is the first book and it’s coming out in July. I don’t want to make it seem like everything is super rosy in the traditional publishing world because MacMillan was the first of the big five publishers to announce layoffs.

But the book is coming out July 7th. What will be happening then – who knows? When this first started happening I kept thinking of that old proverb, may you live in interesting times. Or is it a curse? We’re definitely living in some interesting times. It’s unprecedented, but here we are talking like this. We can still see people it’s just on our computers and keep in touch. 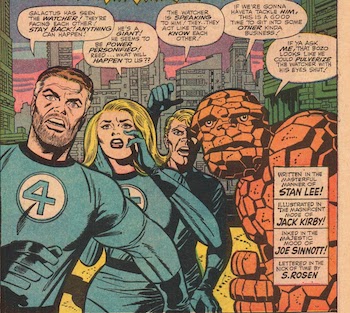 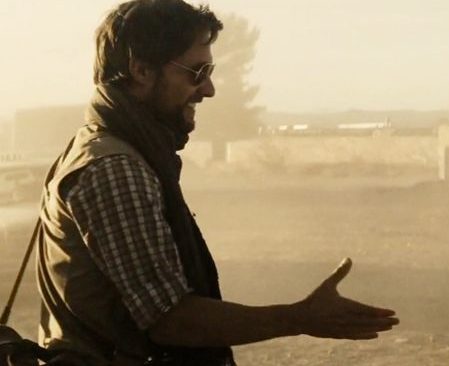 That Agony Is Your Triumph – This Week’s Links