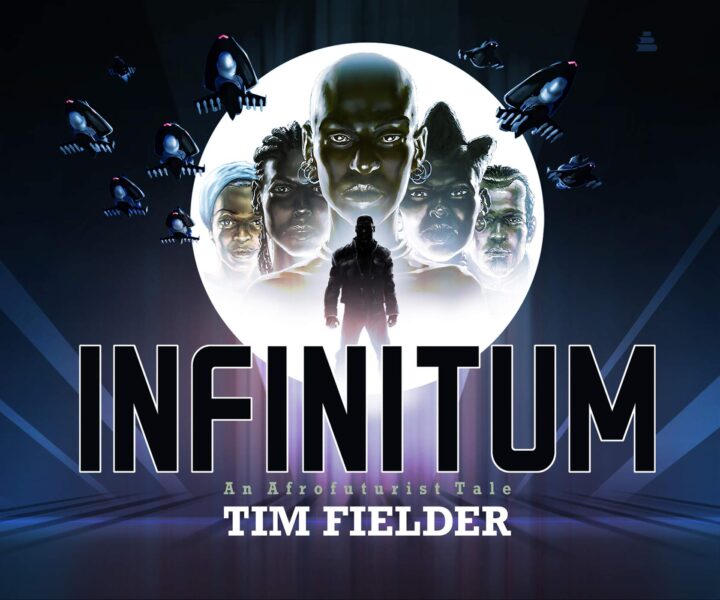 How did this get here?

If I had been looking for someone to review Infinitum: An Afrofuturist Tale (HarperCollins. 2021), it would not be a 79-year-old white guy, who had not read science fiction, except for Phillip K. Dick, in, what, 50 years. Who had never read or watched or heard an Afrofuturist, except for Sun Ra, and, at the time, the ‘80s was it, all he knew from Sun Ra was he was a Black guy (then, a black guy), who played free jazz and dressed funny, though no funnier than the Art Ensemble of Chicago, and may have been off his rocker – no harm, there.

But I had just completed 2000-words on Trots and Bonnie without having felt disqualified from tackling a 13-year-old girl who receives sexual gratification from her dog, and, like Harvey Pekar argued, defending genre writing from attacks by literary snobs like me, Kafka wrote science-fiction, and I dug Kafka, and, according to the New Yorker just down the hall in the bathroom, Afrofuturism is only “how Black writers, artists, and musicians draw on the dislocation of the past as critically reflecting on the future,” and don’t all artists and musicians and writers draw on their past when they create – I do – and doesn’t everyone, going back far enough, not even all that far in some cases, find “dislocation,” if not from slavery, then war or genocide or Holocaust or Cossacks pogromming their grandparents out of Kiev, and, certainly all creators have a “future” in mind, if only one just around the corner, where the means of travel are no different than those right now, and aren’t all speculations about futures, whether of civilizations or one’s self, equally based upon the past of the person speculating, the worth thereof equally dependent on beams not falling from under-construction buildings – as Flitcraft explained to Sam Spade[1]  – or asteroids streaking towards Earth?

Facing me from the wall – the wall, you Jungians take note – was a comic strip, written  by my late pal Tom, in which a talking bear is telling a talking rabbit that “the spirit of God” lives within us all. Not so long ago, I could not have imagined that hanging here either. “The best writer about comics,” Tom called me. 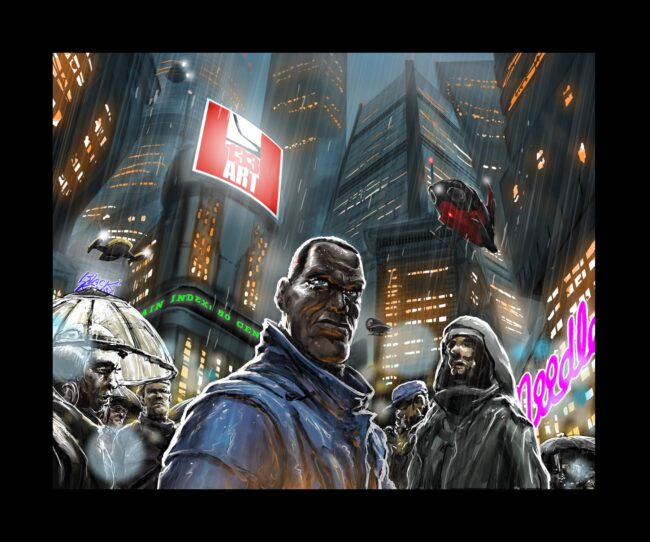 It  – Infinitum – is a 212 (unnumbered, so more-or-less)-page, uh... Graphic novel? It tells a story sequentially through words and pictures, the pictures enhanced by the words, the words enhanced even more by the pictures; but the words come captions-only, no word balloons, and the pictures are not panels, unless each panel is a page (or each page a panel). Maybe it is a folio of paintings – a folio with captions.

The narrative – text and visuals – begins with the creation of Earth and ends (SPOILER ALERT!!!) with the destruction of the universe. It has been created by the mind and hand of Tim Fielder, a – from his on-line photograph – shaven headed, grey bearded, sturdy-armed, exuberant (jumping in the air) fellow in his –  guessing-now – 50s, born in Tupelo, Mississippi (like Elvis), raised in Clarksdale (like the Delta blues), living in Harlem with his wife, father of two sons. Fielder is/has been animator, cartoonist, illustrator, concept designer, teacher, founder of the multimedia company Dieselfunk Studios.

The visual aspect of which is stupendous. Chilling, sometimes. Glorious always. 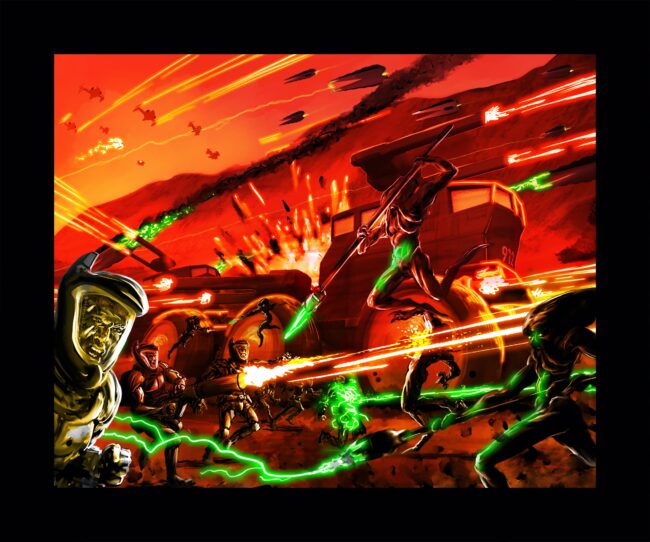 Individual pages are, each in their own way, striking. They come at one through variegated colors shaded toward odd corners of the chromatic scale: burnished golds; off-browns;  retina-searing yellows, fixed within ebony borders, creating infernos amidst nullification, expressing Fielder’s vision of life on Earth. When his tale reaches outer space, eerily ripened magentas and purples and icy blues invoke unknown worlds. When nuclear fires scorch the planet, the yellows and oranges, nauseatingly re-shaded and virtuostically re-orchestrated, crescendo into the hellfire of a “final” battle, before surrendering the stage to a soothing beige. Finally comes Infinitum’s conclusion: blacks and whites. All color absent; all color absorbed.

In the course of this march toward oblivion, particular images press the text into the mind to a depth and resonance of nerve-twang words alone could not achieve. “Seeing” blood fly from a sickle outdoes reading of bodies slashed. “Seeing” saliva-flecked fangs of bestial dogs beats reading of their bites. To simultaneously see both the faces of the strangler and his stranglee – centered heads camera-forward, feet aft – is a treat prose alone can not provide, no matter how skilled the pen and rich the vocabulary of the wordsmith trying.

My favorite pages were filled by Fielder’s “head shots” – man, woman, beast, and “other.” Detailed to whisker stubble and light-in-eye (or absence thereof), they do not probe a soul’s complexity but feelingly render single-emotions – tender or fierce, loving or vengeful. They come spaced through Infinitum like Rest Stops on a highway toward Hell, often accompanied by a page of prose in which the portrayed character tells his/her story before the page’s turn blows them away. 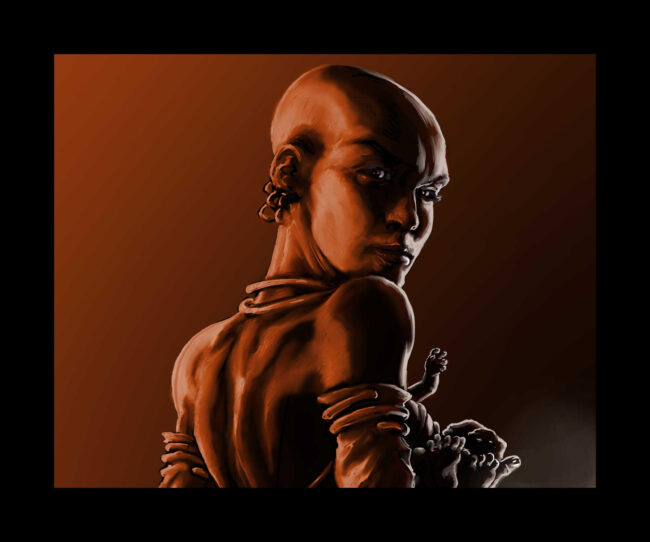 Not that “story” is central to Infinitum.

And having already revealed – no small matter – that the universe ends, I question how much I could spoil what there is of it, but, recognizing my responsibilities as a reviewer, I will be circumspect in my recapitulation – and recapitulate I will – for there is a character you must know about. He enters on page 10 (more-or-less) and carries the remainder of the book on his strength-of-ten-men shoulders. 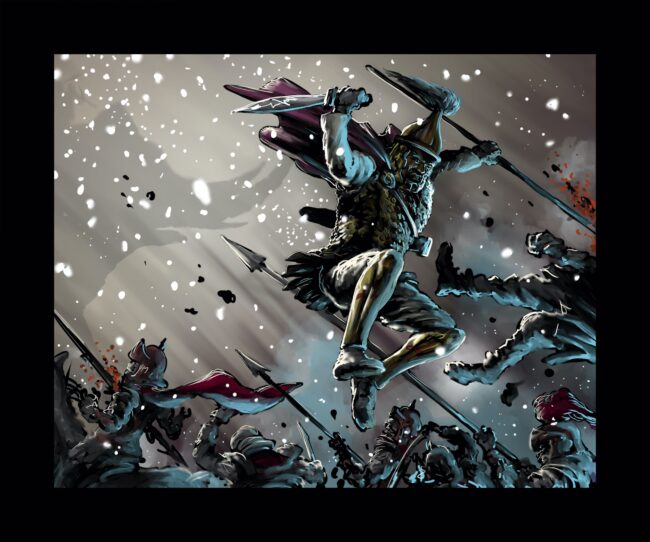 Aja Oba, an African warlord, partnered with his politically astute queen, Lewa, and abetted by ruthless warriors mounted upon “abnormally large canines,” has conquered most of Africa and parts of the Near East and, through unspecified means of commerce-enabling transport with empires across the Atlantic, has amassed great wealth.[2] All of which comes to crap when he runs afoul of Obinrin Aje, a soothsayer and conjurer woman, whose curse leaves him alone, kingdom-less, penurious, and – worst of all – condemned to eternal life, or, as Fielder piercingly, puts it, “to eat and shit and roam... without rot.”

This roaming carries Aja Oba through the time of European conquest of “huge swaths of humanity and territory,” into enslavement in America (where his name becomes “John”), through the Civil War, two World Wars, nuclear bombs, civil rights, and Vietnam, into encounters with Hannibal, Harriet Tubman, Martin Luther King, Jr., and Barack Obama, and involvement in two more ill-fated relationships (Akeyo, blacksmith/artist; Ambermae Smith, slave), leaving him in a state some might regard as psychotic. He becomes a vengeful vigilante, striking down everyone from serial killers to women who complain about outdoor barbecues. He invests, with no aim but profit, in everything from weapons to biological research. “Conflict (has) lost all meaning” for him, and every conflict, whether about race, gender, resources, or in the stock market, is “war.” 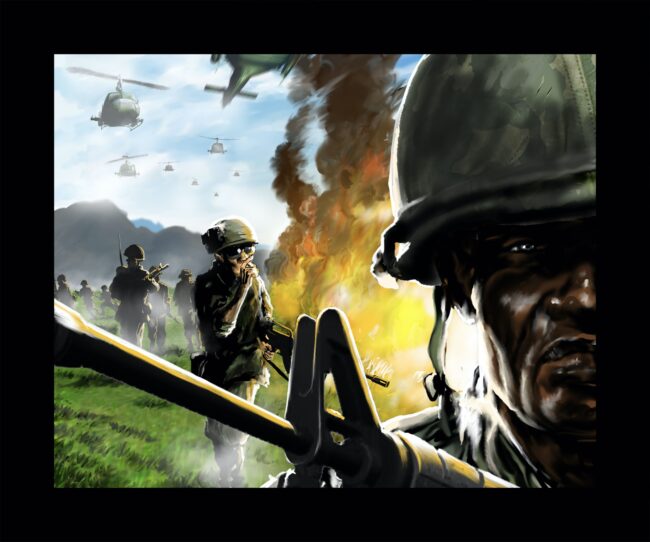 Slightly past Infinitum’s mid-point, interplanetary travel begins. John develops his own planet. He has his last (ill-fated) relationship (Jason Jose Diaz, botanist). But quickly events and characters upon which or whom a compelling narrative can be structured, vanish. Now a single page’s turn eliminates a thousand or two million or a billion years and all that existed/occurred during them. All of man’s history/future is reduced to plagues and natural disasters and annihilative wars with aliens. John can “die” and not “die.” He can be transformed and not transformed. He can find a path forward for man – and become “no longer remotely interested in... mortal affairs”

How, you may ask, can a story this vast not be “central” to Infinitum? (How can it feel to me like nothing?)

Well, because it is too vast.

I already know the universe will end. In fact, I have my doubts Earth will make it through this century. (Hey, personally, I’ll be happy to last the decade.) What concerns me is what to do in the meantime. Infinitum made me feel like a grain of sand in the Sahara – which I already accept, intellectually, in the grand scope of things, I – man – is; but I don’t care about the desert. My concern is – most of our concerns are – the grains of sand beside us.

The book’s big problem is Aja Oba. He is a ruthless, avaricious to-the-point-of-madness, aggrandizement-above-all-else warlord when the book begins; and it takes him a billion years of pillage and slaughter to get anywhere – if getting somewhere is what he did. Oh, he had his moments of decency, but they were wiped out like an Etch A Sketch, and we were onto more slaughter. It was hard to give a damn about Aja Oba or to find anything to hang onto while awaiting one’s own erasure from the blackboard. 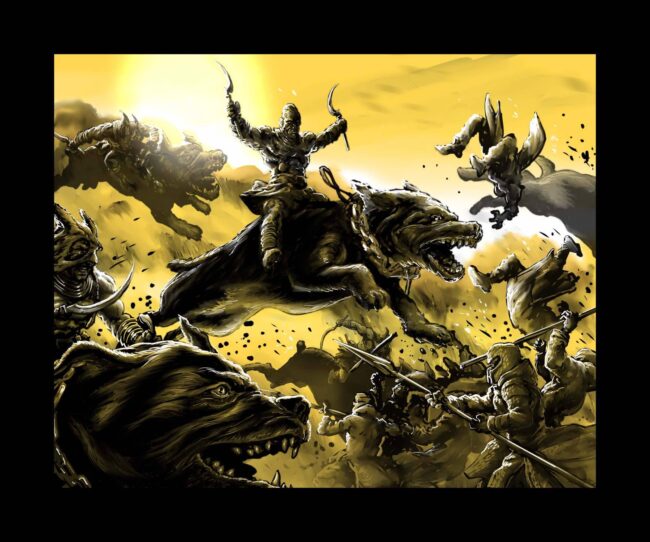 I am not saying Fielder doesn’t make a valid point. Each of us is doomed; each of our universe’s will be eradicated. But there are ways to make this point which allow for beneficial behavioral adjustment while we’re on hold.

Set in Rome’s lower economic depths, during and immediately after World War II, Morante’s view of what-she-terms “the human story” is no rosier than Fielder’s. As he finds man crushed by war after war, she finds him ensnared within “the interminable coils of interminable murder.” But while Fielder casts aside his queen and soothsayer and house slave and botanist like used tissues, Morante lingers over her characters – impoverished school teacher, stunted child, traumatized young man, loyal and steadfast dog  – whom you care about (even the dog), before – SPOILER ALERT; SPOILER ALERT – she destroys them as totally as Fielder destroys entire civilizations. But whereas Infinitum casually flips past “multiple millennia,” anesthetizing you to all that transpired within them, History never allows you to lose sight of what is at stake. Morante sticks you for months in a crowded hovel. Feeds you the gruel on which the characters exist. Drapes you in their rags. You carry their odors with you, chapter by chapter, hour-by-hour, hoping for “good” to come to one of these characters – just one – as you never do for Aja Oba, Even recognizing the futility of this hope, I find it provides a richer – if more painful – experience.

Yet both works argue against the nihilism each seems to express.

By their existence – their realization – both posit the values of hard work and sustained effort, of seriousness of purpose and commitment to vision. Neither Fielder nor Morante took short cuts. Neither went for easy bucks. Both books register an artist proclaiming “This is what I’ve learned. This is what I’m here to tell you.”

And interestingly Fielder and Morante work themselves into similar places. Before Aja Oba washes his hands of humanity, he recognizes that man’s existence depends on his ending all “divisions based on race, sex, ethnicity, orientation, gender, or religion.” And toward the conclusion of History, one of its principals realizes, “A man’s born a Jew by chance, and black and white, by chance... but you’re not born a human being by chance... And no differences exist, in reality, between one human being and another.” So, there you are. “The spirit of God...inside us,” like my wall says. 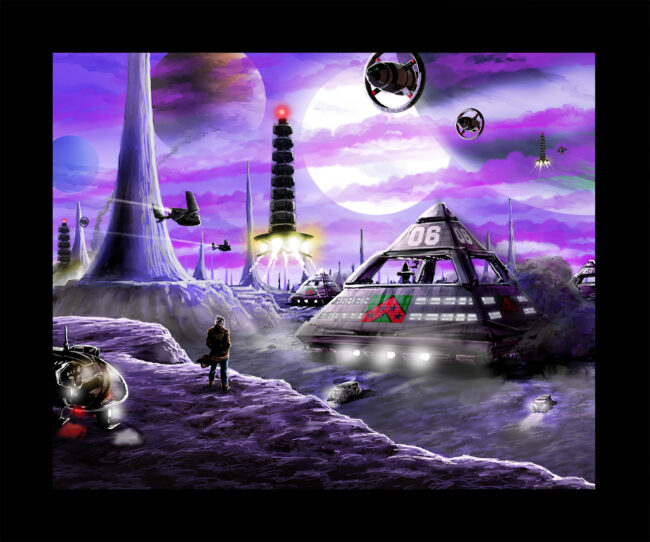 Fielder dedicated his book to his sons. “You Saved Me,” he wrote.

I wondered from what. I imagined that their giving him a stake in the future of the world made a difference to him. That it explained the rage, which Infinitum expresses, at what-appears-to-be man’s pell-mell rush toward destruction. 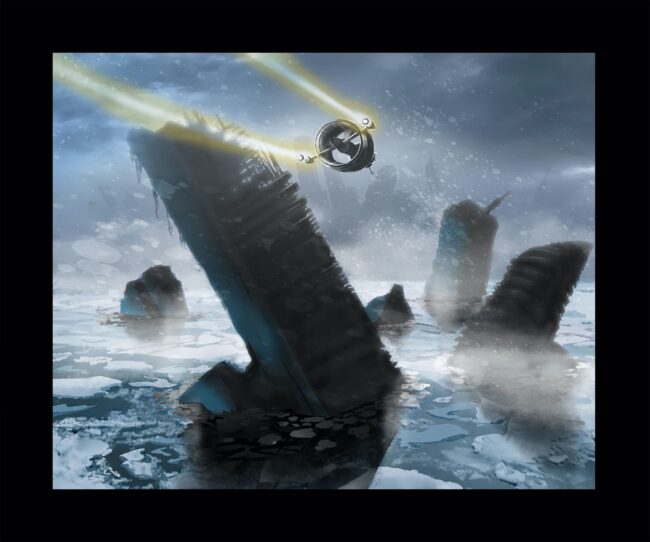 [2]. It is clear Aja Oba is tits-deep in blood. Whether he also owns slaves is unaddressed. 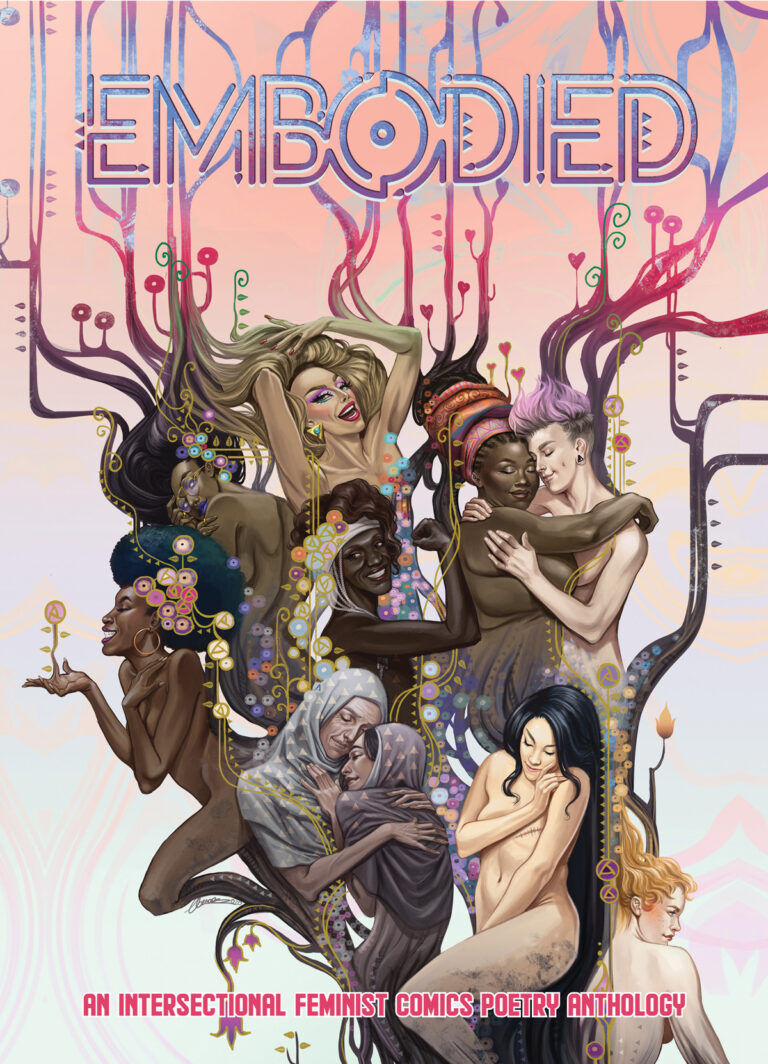 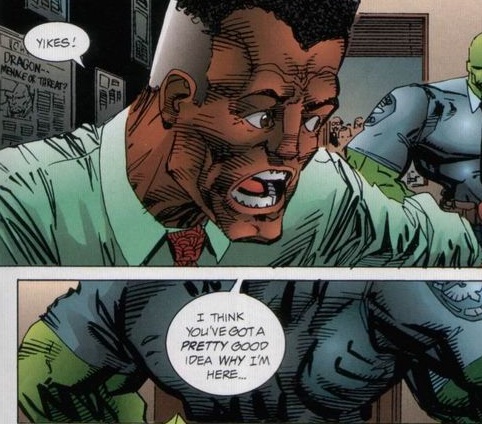