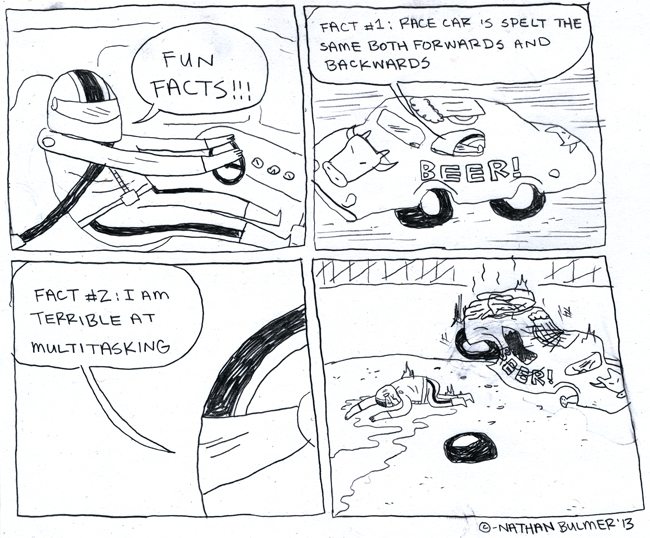 Nate may be bringing the bitter fires this week, but your old narrator found himself on the tail end of a good time in the reading pile. Brother, I wish could tell you about Katana #1--a new title from DC that has been referred to as "the worst DC Comic I've ever seen" by so many different people that I'm starting to think it's some sort of tax write-off--but I couldn't finish the damn thing, and not for lack of trying. So you'll have to make do with the pleasures this time, the moistness, the frivolity. I'm sure we'll get back to basics soon enough. I'm nothing if not predictable. 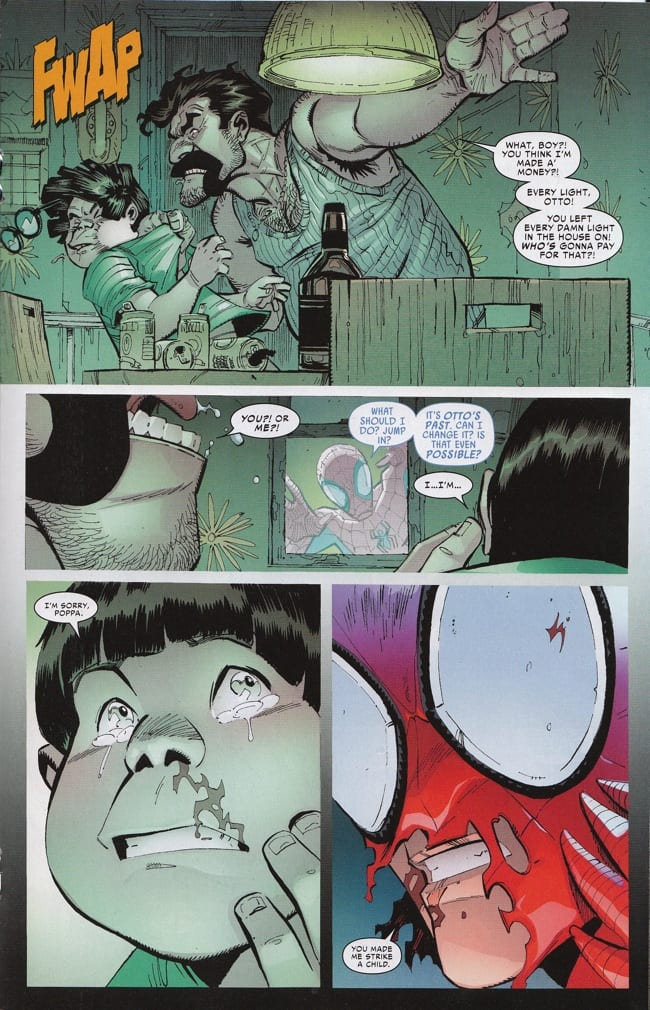 I find myself still enjoying this series and story line, knowing full well that I may never find a partner to share my pleasure with, and understanding that, in some eyes, it may be considered a personal failing to derive pleasure from the mercenary decision to re-do a '90s thing (take a superhero and replace him, Azrael-for-Batman style, with someone darker and more intense), but as an individual who has consistently found the ongoing, omnipresent popularity of the Spider-Man character to be at best bewildering and at worst a diabolical personal attack perpetuated by the entire world on ME, that feeling I'm getting out of reading these comics tastes, smells, and feels so much like pleasure that to call it something else would be a filthy lie, not unlike the ones that Chris Mautner tells when he writes about EC Comics. Why? You want to know why? Well I can't tell you why, shitbird. The humor in here is mostly non-existent--that's not to say Slott can't do funny mean shit, he actually does funny mean shit pretty well, it's the goofy funny shit that he can't handle, either way, this episode involves the abuse wreaked upon Doc Ock as a child, it's Capital S-Serious comics for the most part--and it looks like Ryan Stegman is drawing the comic on a timer with the amount of panels that are actually finished running an even split with the panels that aren't quite done. The jokes and the drawings, then--the things Spider-Man is most often praised for--aren't in attendance. Instead, it's just a serious story featuring ridiculous characters, in service of a stunt enacted out of financial concerns (Spider-Man sales were going down) and accusations of narrative torpidity (they were going down because the comic was often called terrible). I'm supposed to hate this: that's probably why I liked it.

P.S. Casting Mario (of the Bros) as Doc Ock's dad deserves some kind of award, even a minor one. What do they give the Russ Manning for?

Ohio Is For Sale
By Jon Allen
Self-Published 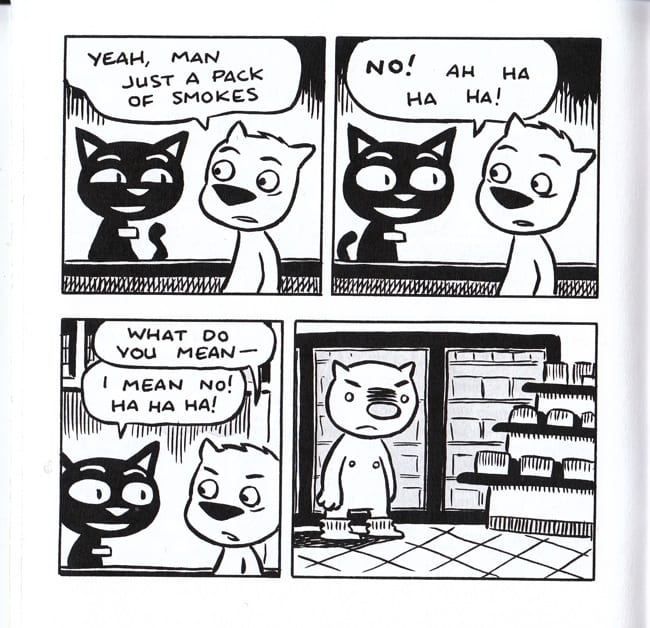 While it's not the second part of his serious graphic novel, Allen's dip into funny animals acting like human fuck-ups is an excellent detour. This is a well-represented genre in comics, but it isn't one that's been well-served lately, with the most memorable exceptions coming out of already established cartoonists like Benjamin Marra (Ripper) and Michael Deforge ("Dogs 2070"). Ohio's an easy addition to that club of successes, all the more so because of Allen's impressive (and severe) commitment to drawing. The characters here--cats, dogs, monsters, and fish like people--look like they're coming out of the end of a rubber stamp, and Allen's ability to consistently replicate them at any angle leaves him free to create an entire emotional language purely from the tiny line used to delineate an eyebrow. And like Inside the Slow Spiral--due to a testy creepiness, still my favorite of his comics--Ohio Is For Sale includes unexplained bits of weirdness that expands its stories far past the enforced boundaries of their plots. Instead of watching a writer get lost in the tangential logic of his jokes, we see a cartoonist cruise by, allowing the humor and absurdity to color the scene instead of control it. 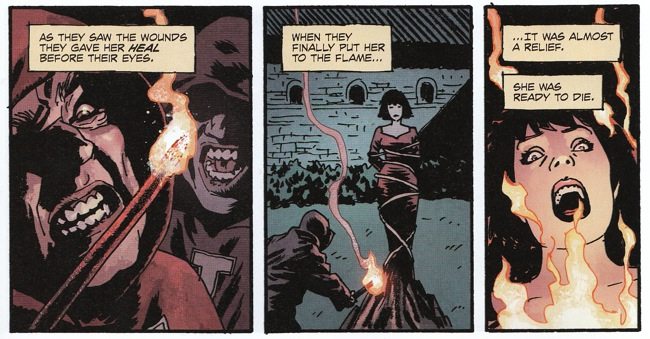 I've fallen for things and stuck with them as my compadres have faded away, only to find myself the last man standing on a comic I no longer enjoy and buy out of habit, and while I always say I won't do it again, I know I'm lying every time I say it. And with Fatale, a series that has been so scattered that its writer has thrown up his figurative hands and said "you just have to trust me that I know what I'm doing" following near-monthly proclamations regarding how long this series was going to last, with the final remark essentially being that it would go on as long as it needed to. While those first two story arcs, which took place in five issue chunks in Fatale #1-10, had their moments of excellence, it's been issues 11 and 12 where the series finally made good on the promise of its initial pitch, where Fatale turned into a fucked up horror story about savagery, survival and the uncontrollable curse of mental instability. Neither issues presented that much of a divergence from the beats that the first two stories prepared the reader for--a striking woman arrives, the men around her slowly fall to insanity in their attempts to protect her and possess her--and the trick of changing the setting was only slightly more than trick, working less to explain this immortal woman to us and more to tease us about the forces that pursue her (which remain just far enough from explained that they still tantalize, but not so far that one suspects the creators to still be figuring that part out). But there's a tightness to these two issues, an excitement at the way both cycle so efficiently through two moments in this woman's destructive existence, endearing her to us while still painting her as a dangerous, unknowable figure. She tells us of terror, and we see her suffer, but it's hard to forget that when the chips are down, everyone who gets close to her ends up dead, and the end is always the same: her, looking over her shoulders at bodies as she gets the hell out of town. 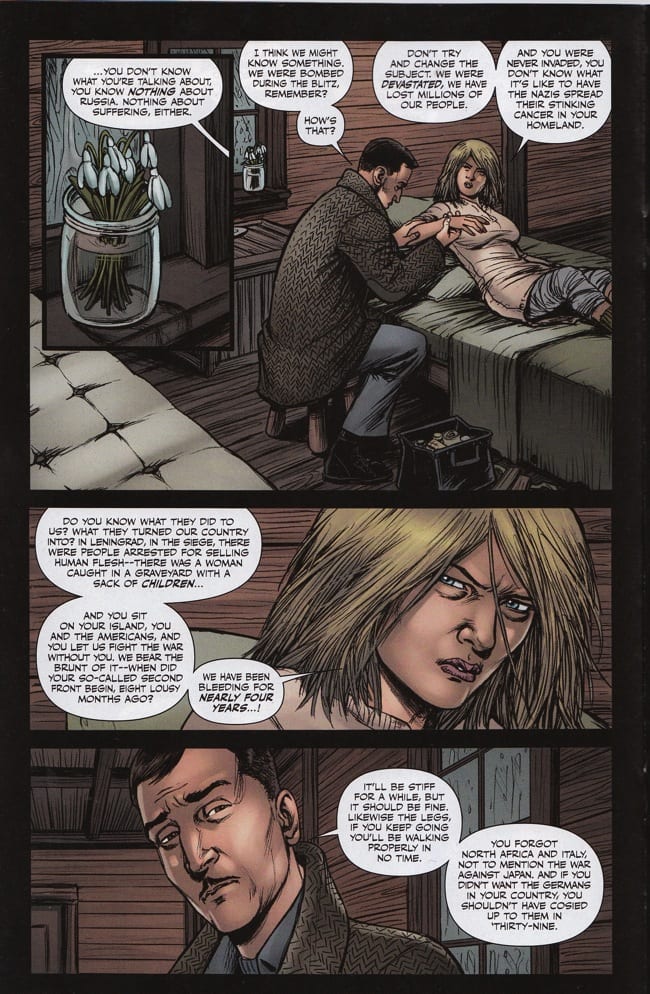 Garth writing a proper British soldier (he needlessly tacks on Jewish as well for no useful reason beyond reminding you of something nobody is ever going to forget about, especially if that person reads comic books) is as easy money as it gets, even if you're someone whose Garth Ennis completionist bent extends its curling fingers all the way around Medieval Spawn/Witchblade (it had its moments!), and throwing that proper Brit and his proper Briticisms into a prison camp with Anna Kharkova--the Russian fighter pilot who previously appeared in two Night Witches stories--seals a deal that, in case this sentence (which began roughly 3 years ago) isn't clear, didn't need to do half of those things to be sealed in the first place. Those who find modern comics a chore to read will have a field day here, with more than 50 percent of this comic taking place in one, primitively drawn room. The script is riddled with cliches, and while Ennis has an unbeatable skill at making cliches sing, very few of them get off the ground here. A bit of that blame can go on Russ Braun's shoulders, as it's very hard to fall for illustrations that pass for human on an all-too-infrequent basis, but truthfully, this run of Battlefields has been a bitter pill, with the stories feeling more like broad sketches than finished scripts. Anna's a sweet, mildly interesting character, but as with the first Night Witches story, the most interesting thing about her has always been how she reminded you of the real female fighter pilots she was based on. The further she gets away from that, the better the story needs to be. Unfortunately, that isn't the direction that it's been going.

With a plot that wouldn't be out of place in a fairy tale--a monster, played here by X-Men villain Sabretooth, kidnaps a young beauty and takes her to his lair, where she learns to feel sorry for him with a speed that you would usually associate with a two-parter, so go ahead and put your hands together for efficiency if you'd like. This is tied into a story called "Mutant Massacre", which I have not read (although I do happen to own a rather large book that reportedly contains the entire tale), but based off this issue's mention, the story seems to be about the murder of many Morlocks. Sabretooth happens to be one of the murderers. There's not much that Nocenti does here that isn't out of character with these kinds of tie-in stories--Daredevil has to let the bad guy go at the end, because he's a Wolverine villain that's only passing through--but she does touch upon a little boy with a helmet, a character that has some recurrence throughout the issues of her run I've read. Like most of her issues at this point (the Windsor Smith being the main exception), this is a visually scattered comic that looks like it was rushed out by people who couldn't be bothered to care. Considering the story they were saddled with telling, there is no shortage of explanations as to why that might be. 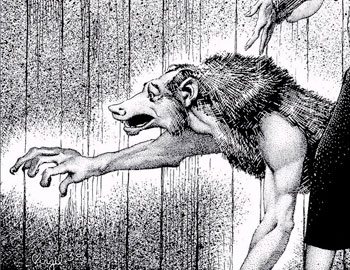 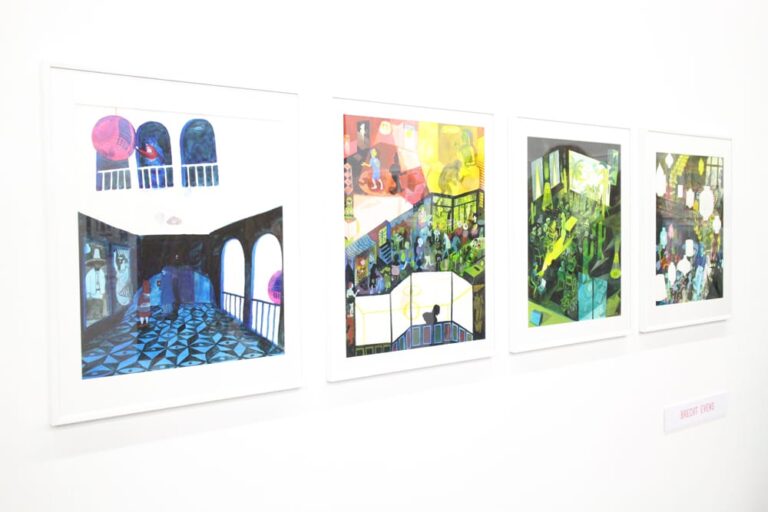 Is There a Fly In Here?