There's no Abhay this week, and there's only a few good comics to poke around with, so let's start off with an Eat More Bikes palate cleanser courtesy of Nate Bulmer. 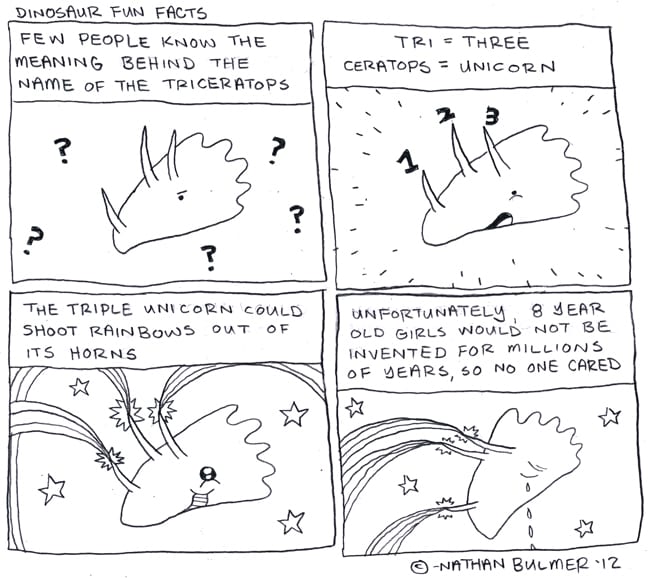 NOW FOR THE BUSINESS 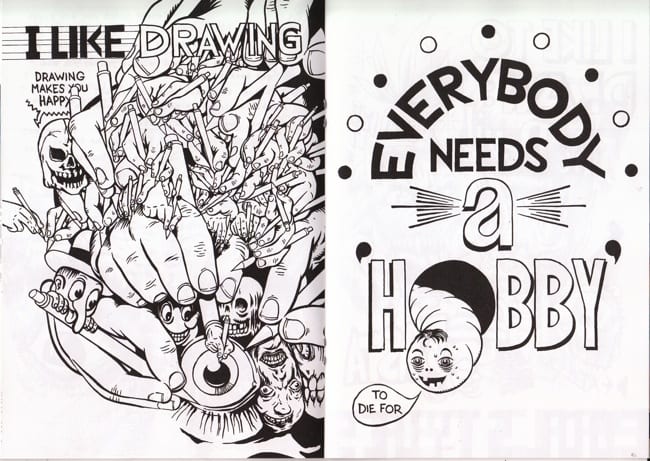 A little bit of Tim Vigil and a whole lot of something else, this black-and-white comic features some of the most challenging examples of Can You Handle It? drawing this side of sanity, the most intense being a nude bodybuilder who has a standalone vagina resting on his pompadour, an erect penis (with intact sac) sprouting out of his tongue & drooling mouth like some kind of a mid-chin dick-unicorn, and a couple of deformed naked ladies apparently growing out of his arm. One of those ladies is wearing a ball gag, and the other one is masturbating. It’s not totally clear if pages like these—and there are a few pages “like these,” one even comes with a yellow sticker covering ... something (I haven’t removed it to check, because I'm an emotional cripple)—are part of the plot, or if the pages that seem to have a plot (which is about a guy whose face became crystalline and was then hospitalized when it became necessary to hammer an air hole through the crystal) are a break from the drawings or just, you know, fucked up drawings, but forcing Gladland into a narrative box would possibly strip it of some of its charm, which, despite its foray into the grotesque, it definitely has.

Moebius 8: Blueberry
By Jean Michael Charlier & Jean “Moebius” Giraud
Published by Graphitti a while ago 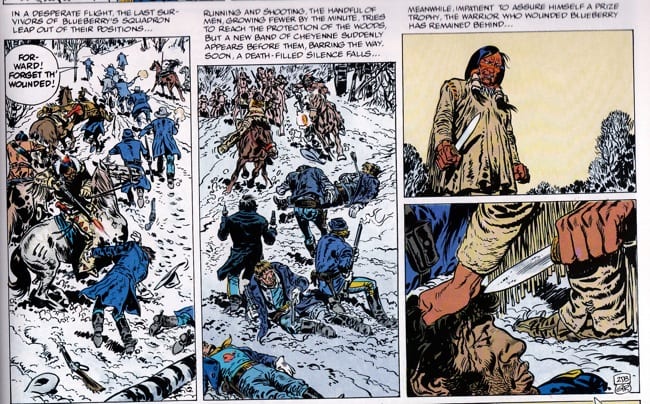 Also referred to as “Lieutenant Blueberry” and featuring the stories “The Iron Horse”, “Steelfingers”, “The Trail of the Sioux”, and “General Golden Mane”, this collection is an excellent installment of the sorts of pleasure Blueberry stories have to offer. It can be a bit difficult for some to stomach for lengthy periods of time, as these tales have a tendency to smash its lead character three steps back for every two he’s permitted to take, and after a while, all that deus ex bad luck can get irritating. The art is the obvious American draw, and as such, there’s little disappointment to be had on that front. Horses, cowboys, and trains, all three drawn in such a way that points more to museum visits and less to pictures--everything has a density to the way it saddles the panel, and it can take effort to linger. Moebius lathered on a lot of care, but it’s hard to ignore the character’s desperation, to abandon that hope that success might be just coming up on the next page. Considering the decades of time clocked, Giraud clearly felt the same. 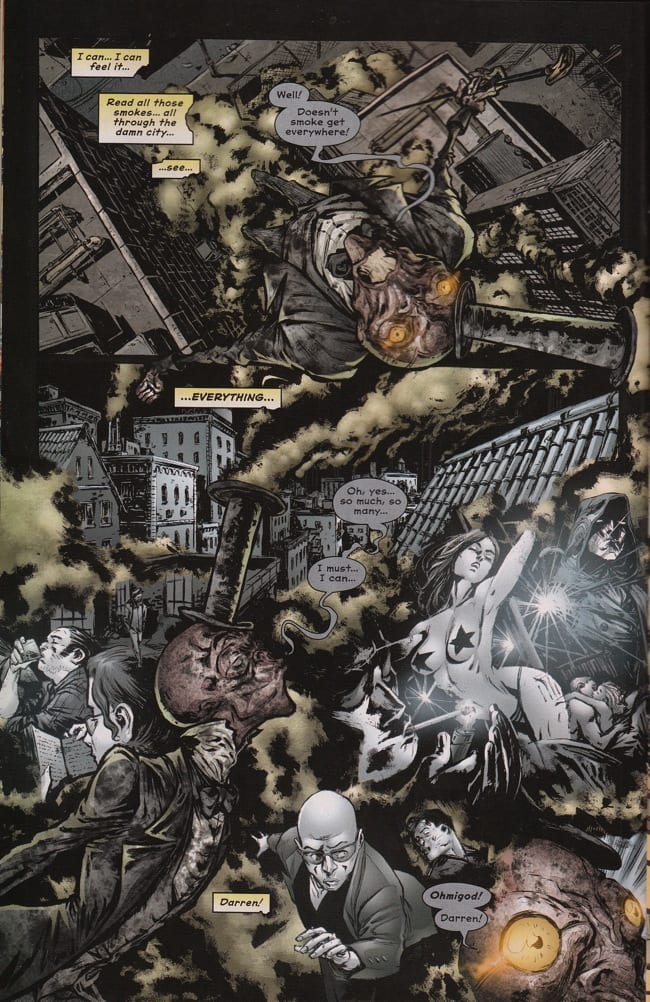 Although it definitely wins some sort of consolation prize for not sounding/reading exactly like every single other mainstream cape book on the stands, Dial H may be the unfortunate herald of a terrifying future: crappy imitations of Grant Morrison comics. Sponsored by slumming, Dial H is written by some guy who writes those kinds of fantasy novels that look more respectable than Dragonlance books but aren’t respectable enough not to be shelved alongside them, and it's drawn by another one of those DC artists who never saw a picture he couldn’t add way too many extraneous lines to. It’s about a fat guy with a friend, a rotary phone booth that turns people into random super-heroes, and it’s probably qualitatively better than most DC comics currently available while still not being half as aesthetically successful as the last two YouTube videos somebody emailed you links to. This will be the favorite thing of exactly no one, but it will probably be a few people's number seven. 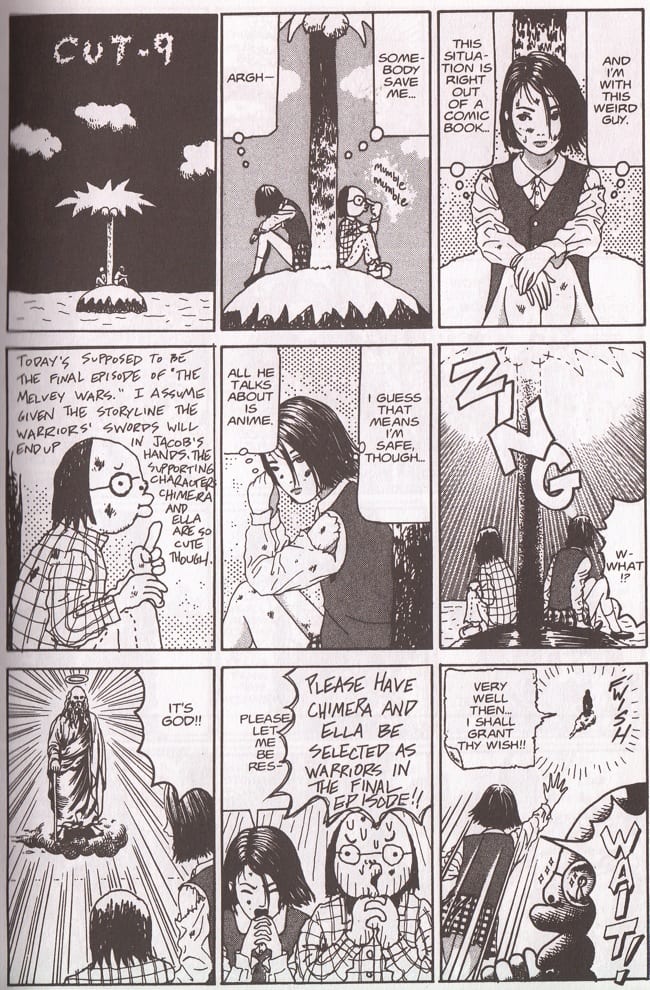 A little book consisting of one to two page humor pieces centered around ko-gal, which the author defines as “a Japanese high-school girl with attitude.” It’s very funny, and some of the comics in here--most notably, “Cut 7”--manipulate the basic visual language of manga upon the reader to unexpected, rewarding ends. (Cut 7 and Cut 10 are worth whatever effort it takes to track this collection down, the former because of its ingenious visual manipulation, the latter because of its as-ingenious verbal trick; both are too special to spoil.)

A free newspaper with one-page contributions from a variety of cartoonists, some of whom wear their influences more obviously than others. There’s some clear differences between everybody’s current level of skill, and some pages that seem like they’d be more comfortable existing as stand-alone prints to be sold to the I Prefer Stand-Alone Prints audience, but in the grand pantheon of shit that you can be occupied by, free comics newspapers that don’t descend into genre parody or cutesy “all-ages” animal shit for 43-year-old men still angry that they grew pubic hair ... these comics aren’t the enemy, you know? Some smirky kid looking at Paper Rad way too often is always going to be preferable to another self-righteous webcomic about how hard it is out there for single 30-somethings who miss the Go-Bots and Totally Hates The Racisms. 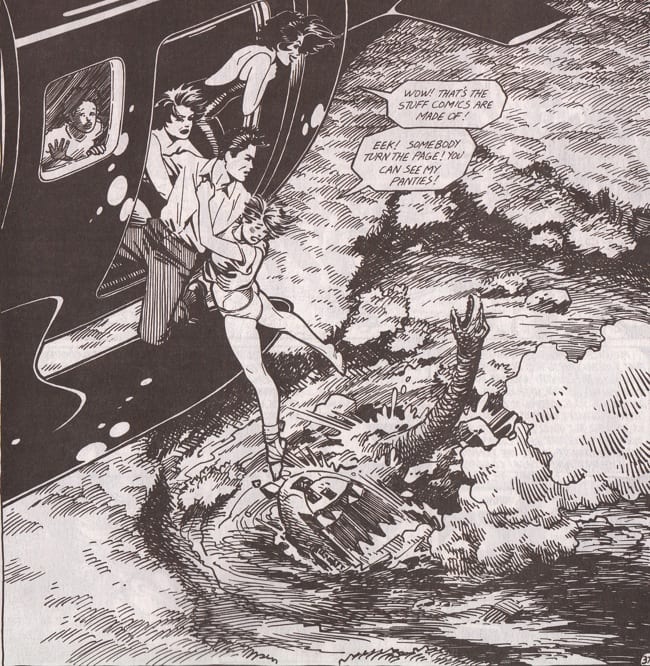 A fucking knock-out, really. This wasn’t even stuff that yours truly ranked that highly-- “Mechanics”, “Radio Zero”, “Music for Monsters”, and “Somewhere in California”--but reading it in this contained format, without the universally celebrated “good stuff” that the longer digest collections yank you foward with, it's weirdly excellent. Maggie’s impossibly beautiful, striking classical pose after classical pose, while Rand Race and Penny Century keep falling into every different kind of romance-engorged tableau that ever went to paper. There’s so much to love in here, and Gary Groth’s overly excited, Gaddis-quoting essay really sets a wonderful tone. This thing stinks of comics, it’s wet and messy. The Punisher of feelings, and thighs.

The External Hard Drive Crossover (featuring Spider-Man, Bearded Punisher, and Greg Rucka Fantasy Lady Version 3.0) concluded in last week’s Daredevil with Daredevil still wearing the external hard drive around his neck, but Waid and Co. seem to have decided they’re going to maximize whatever mileage they’re getting out of that particular storyline, meaning that this issue only mentions it in passing. More carrying a glorified address book around excitement to come! In this issue, they instead choose to tell the story of Daredevil’s first date with the new district attorney, and it turns out Matthew Murdock knows how to show a lady a good time, and by showing her "a good time," I mean he tells her some fucking story about that fat piece of shit he hangs out with all the time, because there's nothing a lady likes more on a first date then listening to the dude drone on and on about the moment in college when he realized he was becoming best friends with some guy she doesn't particularly like that much. Waid and Samnee try their best to uncover a secret awesomeness to a bunch of clichés, but this issue--like the three-issue crossover that preceded it--is another dud . Marvel had a clear winner on its hand with this title not that long ago, but over-shipping, overwrought crossovers, and an abysmal series of fill-in artists have turned Daredevil into the exact kind of mindless filler it spent its first seven issues acting in stark criticism of. Then again, it's fucking Daredevil, and if there’s one thing this title has historically been great at (besides murdering girlfriends), it’s brief moments of good in between years and years of the opposite. 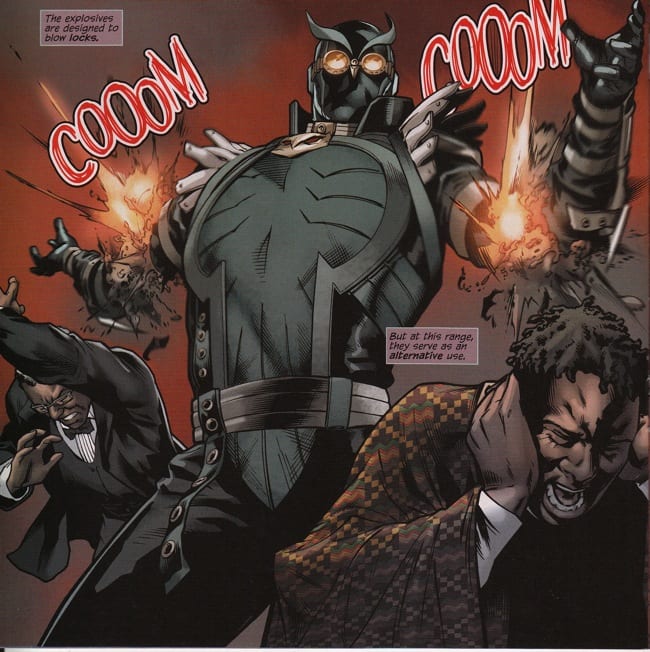 Although DC is in the middle of cancelling a bunch of their "New 52" titles, this one is not only dodging the axe but getting itself included in the "Night of the Owls" crossover sprawling out of the successful Scott Snyder-led Batman title. Batwing is a weird, weird comic, almost unreadable in its initial installments, all of which were card-carrying members of the hilariously offensive variety of super-hero comics--a short-tempered black man sponsored by a rich white Westerner fights a villainous African warlord who cuts off the heads of children with a Darfur-inspired machete and openly refers to himself as "Massacre"--but this issue just sees the character dumped off in Gotham City, where he fights off some random storm trooper type by blowing the dude's arms off.

Detective Comics #597
By Alan Grant, Eduardo Barreto or Eduardo Baretto, Depending on Which Part of the Comic You’re Looking At, John Wagner, Steve Mitchell, Adrienne Roy
Published by DC Comics, 1989 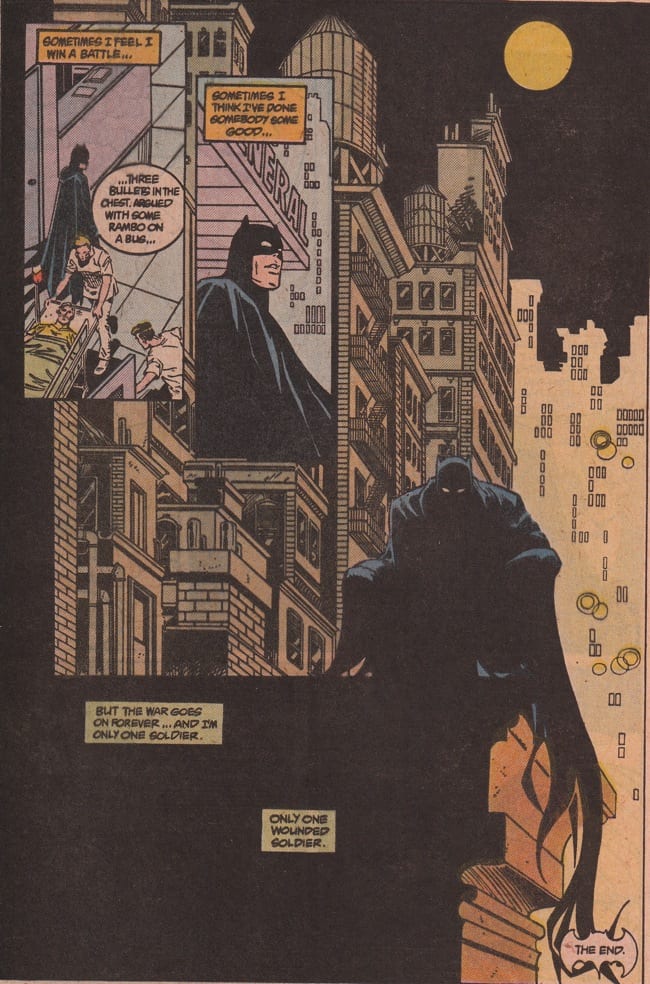 This is the second part of a two-parter, and yet it would have read as a far smarter comic if this was the only issue that existed. It opens with a splash page featuring Gotham’s richest (well, except for Bruce) preparing to watch the latest in a series of Advanced Bumfights: The Batman Installment. We then see the fight and its aftermath, which is one of those weird passages that’s gone extinct in today’s hunger for faux-realist super-hero stories, a passage where Batman goes to the hospital and is treated by doctors who allow him to keep his mask on. Then Batman drives around in broad daylight, thus setting an all time record for the most-obvious suspect tailing of all time. It’s a one-trick pony, this comic, and there isn’t a note you won’t see coming. There’s some pretty drawings, but that’s it. This is the sort of comic that a childless man reads only to realize that no, he’s never going to read this to a little boy, and if his own father was still alive, he would call and tell him that they should have played a little two-hand touch instead. Life is a meaningless spiral into oblivion, there is nothing beyond the mortal realm, and average super-hero comics are far worse than those that are merely bad. 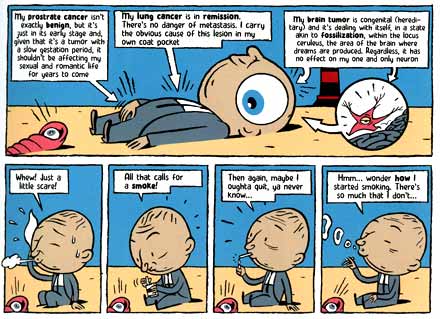 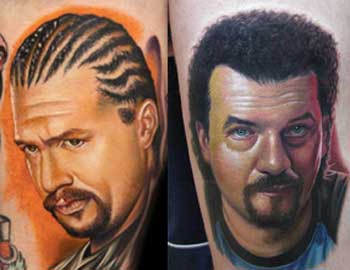