Today on the site, Greg Hunter concludes his two-part look at how the character of RoboCop was used in comics, and whether or not the satire and social commentary of the original film survived its adaptations...

After departing Dynamite, RoboCop found his next home at Boom!, which adopted an approach similar to Avatar’s, bringing in Steven Grant to adapt Frank Miller’s unused screenplay for the third RoboCop film, this time with artist Korkut Öztekin. The result, the RoboCop: Last Stand mini-series (2013), is a diminished work, even by the measure of Frank Miller’s RoboCop (Avatar). Whereas Miller’s original screenplay for RoboCop 2 managed to approximate RoboCop’s post-human manneredness, the Miller script Grant uses for Last Stand gives the character stock noir dialogue. The story’s take on a corroded Detroit is also more perfunctory; when readers see a commercial for something like the forced reprogramming of rude children, it has a direct link to Last Stand’s larger plot. The work here resembles The Spirit (2008), a film in which unchecked Millerisms smother the identity of its source text.

Last Stand begins with RoboCop in hiding, framed for a series of murders but committed to protecting Detroit’s most vulnerable. The city’s police force has collapsed, and RoboCop is effectively at war with OCP, aided by a rogue engineer and RoboCop super-fan named Marie Lacasse. Battles rage within OCP as well, allowing Faxx, a scheming researcher, to rise to the top. Faxx, whose work involves “molding [a person’s] existing personality to a more socially acceptable matrix,” is a character nearly identical to Margaret Love of Frank Miller’s RoboCop, down to Last Stand’s irony-free attempts at titillation. These resemblances occur often throughout the series; it’s a wonder Boom! had any confidence Last Stand might stand on its own. The comics read not just like an echo of the film RoboCop 3 or Grant’s Miller adaptation at Avatar but also of Miller’s other works.

Jesse Reklaw is here, too, with the second day of his Cartoonist's Diary.

And Josh Kramer has a review of Lucy Knisley's pregnancy memoir, Kid Gloves.

Before I get into reviewing Lucy Knisley’s new book, Kid Gloves: Nine Months of Careful Chaos, I need to own up to something. Until giving Kid Gloves a serious read, I thought of Knisley solely as a memoirist. Her five autobiographical graphic novels recall the mostly charmed twenties of a middle class American white woman.

Knisley has long acknowledged her privilege. "I am lucky. I am aware of that," she writes in 2014’s An Age of License. "Yes, I make work about food and art & travel BUT THERE IS MEANING IN IT if to no one else but me."

And clearly others have found meaning in her work as well. Knisley is an award-winning and New York Times best-selling author. She attended both the School of the Art Institute and The Center for Cartoon Studies. [I did also but we did not cross paths.] Six books by age 34 is no small accomplishment. But here’s the thing — I was wrong about her.

—News. This weekend brought the announcement of one of our greatest living cartoonists, Gahan Wilson, is suffering from dementia, and in need of help with funds for medical care. His stepson has set up a GoFundMe site here.

Gahan and my mother had been residing in an assisted living facility in Arizona. With my mother's passing, the facility is about to discharge him. We must find him a memory care facility immediately. 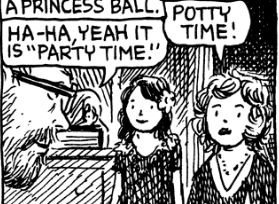 “It’s Still A Raw Nerve”: An Interview with James Sturm