I’m in my fifties, which, according to some, makes me old. Given that “50 is the new 40” (or "the new 30” or whatever), perhaps I’m not quite “senior” (though a few months ago, I got a senior discount on auto parts). They say you’re only as old as you feel — and I feel old. Especially when I enter that dangerous territory known as “online comics criticism.” As a part-time “comics critic,” I’m part of a world that worships the young. It’s fine, I suppose, to venerate youth; I certainly wish mine wasn’t receding into the past with such debilitating speed. What’s weird to me is that many of comics’ enlightened thinkers — critics and cartoonists who say they reject discriminatory rhetoric and its binary logic — eagerly use age categories as weapons. For them, young is good, old is bad. Put a little more directly, the online world of comics criticism is ageist AF. 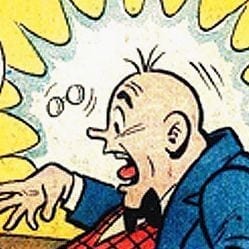 Perhaps nowhere is this ageism more visible than in commentary surrounding the new Nancy comic strip. If you like it, great. But if you don’t, prepare to receive the absolute sickest of burns: “You are old.” Originated by Ernie Bushmiller in 1938, Nancy was recently revived by a cartoonist using the pseudonym “Olivia Jaimes.” I like most of Jaimes’s new daily and Sunday strips a lot. Others are solid, a few are bland, some are repetitive (too many cell phone gags), and some I just don’t get (likely ’cause I’m old). If you think the new Nancy is, like her pal Sluggo, “lit,” I’m perfectly ok with that (and if you haven’t read the comic, I recommend it). If you hate it and think it was only good when Bushmiller did it, I'm fine with that, too. I might have some trouble with anyone who thinks Guy Gilchrist is the best Nancy cartoonist. But even then, whatever.

I prefer Bushmiller and think he’s a genius of a magical-materialist comedy, perhaps the greatest gag-master to have ever cartooned. But don’t be offended when I say this: I really don’t care about your taste. It’s just as valid — and more importantly, just as worthless — as mine. It’s odd that the strip has become a litmus test for comics people who have moralized — even “weaponized” — the intensely subjective notions of good and bad taste. What’s not odd is that, in comicdom, as in our profoundly ageist world, “good” and “bad” map directly onto “young” and “old.”

Online commentators regularly go after anti-new-Nancy critics, dismissing them as ageing readers afraid of anything fresh. If you simply say that don’t like the jokes, you’re a stupid boomer or elderly Luddite. Yet how do they know that the criticism comes from “seniors?” I’ve read many reactions and, predictably, posters don't state their age. So “old” becomes, not descriptive, but purely pejorative. By its very nature, a wrong Nancy opinion outs you as the backward-looking lout we call “old.” If you’re not actually old, your opinion indicates that you might as well be, 'cause old people have bad taste. More often than not, an ageist dog whistle isn’t necessary. It’s perfectly acceptable to expresses your animus directly. Simply call your and you pals' foes "old" — as so very many have. This tactic — one group creating solidarity by demonizing another — is as ancient a tale as it gets, a power trip driven by the impulses that drive so many forms of discrimination.

It's crucial to note that Jaimes and her comic have received a ton of nasty comments, some as vile, sexist, and indefensible as one can find on the internet. But rather than compound the hostility and discriminatory language by assuming the comments must come from dumb old folks, why not just call these people what we know for sure they are: misogynists, assholes, etc. Some critics make an all-too-easy recourse to ageist language, thinking that defending Jaimes and attacking sexism requires, and perhaps even justifies ageism. But it doesn't.

When the ageism of online comics criticism rears its ugly head, the fear of nostalgia — the premier old folks affliction — can’t be far behind. If you dislike new Nancy and like old Nancy, you must, the ageist argument goes, be blinded by an uncritical love of old things, especially those of your childhood. For decades, comic books had often been seen as the province of the man-child who laments that all goodness lies in the past: “Nothing today is as good as the superhero tales I read when a youngster.” And one way to demonstrate your status as a Serious Critic is to signal that you are in no way this old-fashioned type: “I am certainly not nostalgic for shitty old comics. I am in touch with what’s vital, new, and young. Naturally, then, I love new Nancy.”  Many comics critics dread appearing nostalgic as much as they seem to dread growing old (we often hate that which we know we will become). Perhaps some of the many critics who obsess over new comic books featuring attractive youthful protagonists do so as a talismanic way to reject or forestall the eventuality of ageing. And who could blame them?

Not too long ago, I saw a video in which a speaker expressed surprise at seeing old folks at a comic-book convention. This struck me as strange; I must have seen thousands of older people at the dozens and dozens of comics events I’ve attended over the past four decades. (Look around, they're everywhere.) The speaker made a particularly odd claim about this demographic: they don’t engage comics in the way that others (i.e., young people) do. What exactly, I wondered, does this mean?: Once a week, the van comes to the old folks' home and drives them to the library, where they’re wheeled into the microfiche room to hand-crank their way through dimly-lit film of the The Bungle Family? Perhaps the video hints at something even less pleasant. Old people, simply by virtue of being old, are not capable of reading comics with the critical acumen or cultural awareness of the young and the hip. I really hope that’s not what was intended, but the “us vs. them” logic of identity difference seemed to suggest (as binary thinking often does) something unkind. As a teacher, I've discussed comics with college students for two decades and haven't seen any fundamental differences between the ways we read. And some of them read so differently from each other that I'm not sure you could make a single meaningful age-based generalization. 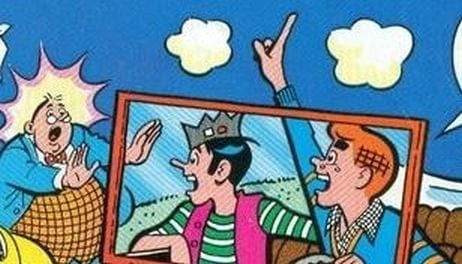 Thoughtful writers and cartoonists recognize the myriad ways that discriminatory rhetoric pervades the discourses of comics and our larger culture. They rightly condemn the forms of prejudice that, for example, infest the virulently anti-diversity C*m*csG*t* movement. Yet ageism, which is structurally analogous to bigoted practices like racism, sexism, fatism, and ableism, is somehow invisible to them. As the World Health Organization says, “ageism is everywhere, yet it is the most socially ‘normalized’ of any prejudice.” Over the years, I’ve seen artists and critics mocked for no longer being blessed with the rosy glow of youth and told (implicitly or explicitly) that, because they are old, they are irrelevant. This makes me sad, but perhaps that's just because the older I get the weepier I get.

When I was young, birthday cards, banners, and cakes for those making the forlorn rite of passage from worthy to worthless (i.e., from thirty-nine to forty) displayed a callous phrase masquerading as humor: “Congratulations, You’re Over the Hill!” Back then, forty seemed infinitely far in my future. It was, I guessed, the age of my parents, who as parents were inevitably squares, something I didn’t want to become and thought I never would. Now forty seems far in my past and I'm continually forlorn and square. 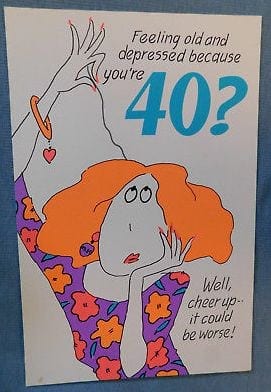 As a teenager (and for longer into my adulthood than I care to admit), I was what I now recognize as ageist, thinking of “old” as bad, uncool, lame, bogus, played out, stupid, weak, etc. (In retrospect, this hostility is peculiar given that all my favorite jazz musicians — the ones I worked so hard to play like — were either old or dead.) Perhaps I was ageist because I was afraid of aging, of becoming old, sick, or, worst of all, of becoming culturally irrelevant. I needed  something to build myself up, something to define myself against, and “old” worked, as it does for so many. An anthem of my teen rage and ignorance proclaimed, “I hope I die before I get old.” Now that I'm old, I feel differently. As another favorite track from my adolescence counsels us to remember, “It’s later than you think.” 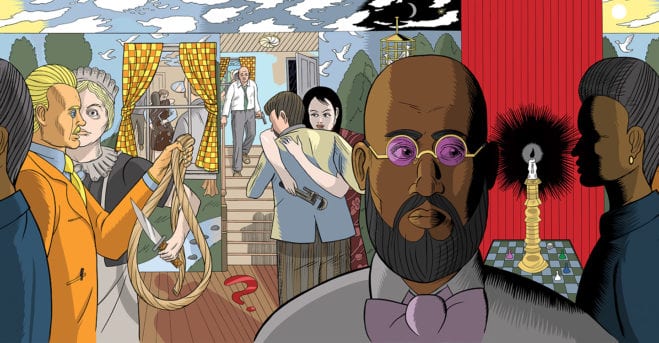 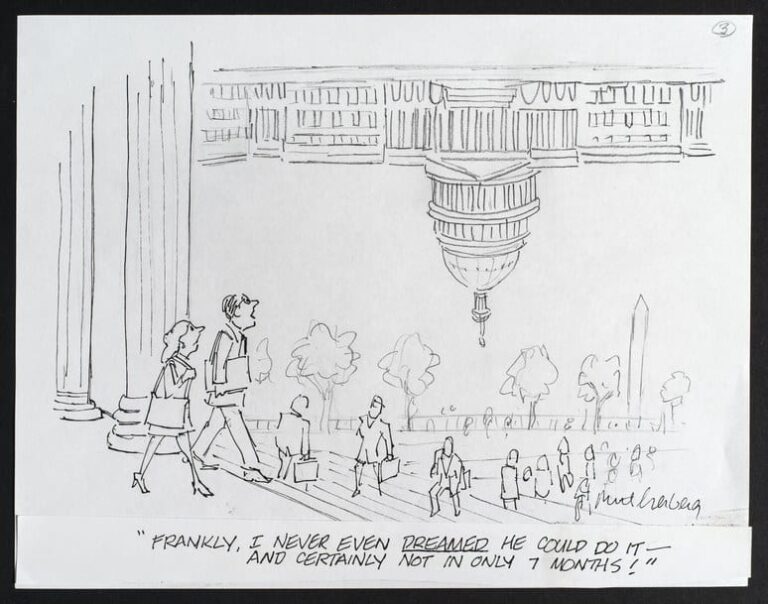 Never Dreamed He Could Do This