One of the last, and most respected, of the golden age comic artists has passed.

Fred Kida (pronounced KEE-da) died on Wednesday, April 3, 2014 at the age of 93, survived by his wife, Elly, two sons, Paul and Peter, two grandchildren, Takashi and Lani, and two great-grandchildren, Connor and Alexis. He had been married to his soulmate, the former Elly Ahnert, since October 5, 1946.

Fred’s career as an artist spanned a incredible fifty years, going from a background artist in 1941 to his own byline on a major syndicated comic strip in 1991 before retiring. Deeply religious, he also served as an elder in the Port Chester Congregation of Jehovah's Witnesses.

Of Japanese-American descent, he was born December 12, 1920, in Brooklyn and raised in Manhattan, New York City. After graduating high school in 1938, he attended The American School of Design, alongside Bill Fraccio and Bob Fujitani, two artists with whom he would became linked professionally.

When Will Eisner was drafted into the U.S. Army in 1941, Fred broke into comics as an inker and background artist at the Jerry Iger Studio, formerly Eisner & Iger, one of the earliest "packagers" of outsourced content for comic book publishers, doing background inks on Eisner’s syndicated "The Spirit."

Kida then moved up to a staff position at Iger client Quality Comics where he both penciled and inked his first known credited work, the feature "Phantom Clipper" in Military Comics #9, cover dated April, 1942. He also reportedly produced a Hangman story for MLJ Publications, as did former classmate Fujitani.

Later that year, he began a seven-year association at Hillman Comics, which saw him introduce his former classmate Fraccio to the field as an inker on the feature "Iron Ace." His tenure there also resulted in a fortuitous pairing with Dan Barry on "The Boy King" that would have long term implications on his career. 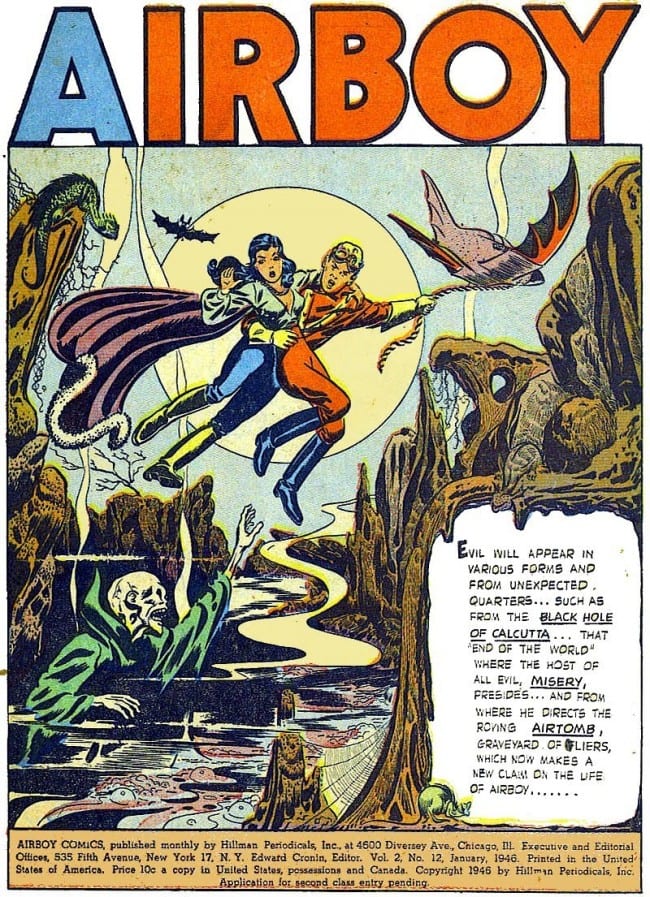 His work at Hillman etched his name in comics history, where he breathed life into Charles Biro’s flying hero Airboy and his scantily clad antagonist and sometime ally Valkyrie.

Other characters he worked on at Hillman included Gunmaster, The Heap, and The Challenger. He handled Iron Ace from its debut in November, 1942 and produced a number of memorable covers and the occasional crime and horror feature.

Near the end of his tenure there, he briefly teamed with writer Robert Bernstein, replacing ex-classmate Fujitani on the syndicated comic strip "Judge Wright" (inked by George Roussos) from December, 1946 to June 10, 1947, continuing the Bob Wells pseudonym that had graced the strip from the beginning. Bernstein’s work on the strip was signed as Bob Brent, the same name he used at Boys Life magazine for the Boy Scouts of America to create two monthly strips with Kida called "Science Silhouettes" (a fact feature beginning in November, 1947) and "Eagle Trailer," true life boy scout adventures beginning in October, 1947. He also worked on several issues of the 1947 promotional comic Buster Brown alongside Dan Barry, John Belfi, Reed Crandall, John Giunta and other seasoned pros.

When sales of superheroes began to weaken, Charles Biro, now art director at Lev Gleason Comics, launched Crime Does Not Pay and hired the best artist who worked on his earlier creation Airboy: Kida.

For Biro, the artist produced several dozen crime strips over the next five years, as well as romance, and the features "Desperado", "Air Devils", "Pee Wee and the Little Wise Guys", and "Uncle Charlie's Fables."

Kida also did some freelance work for Avon during this period, including "Knight of the North" in 1948 and "Jesse James" in 1951, and began cultivating a relationship with Stan Lee at Atlas (later Marvel) on its western and war titles. 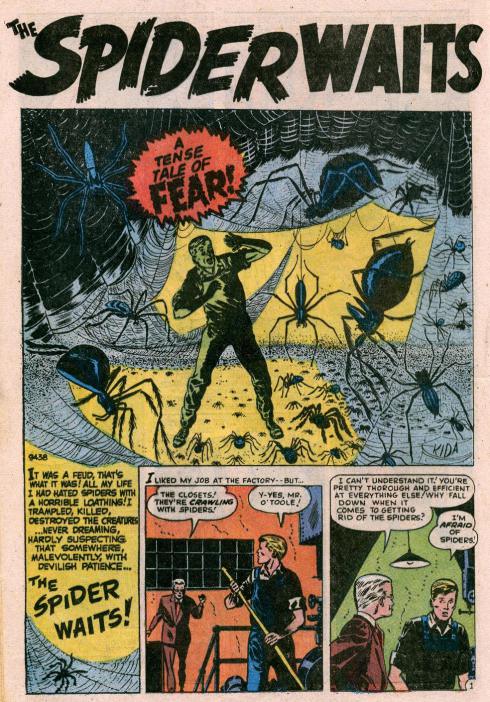 His prior experience with Dan Barry led Barry to repeatedly ask Kida for assistance repeatedly to meet the deadline pressures of his daily science fiction strip, Flash Gordon in the mid-to-late 1950s. This directly led to Fred’s next career doing daily and Sunday syndicated comic strips for some of the biggest names in the business. In 1960, Milt Caniff hired Kida, Alex Kotsky and Ray Bailey to help him get ahead enough on his aviation strip "Steve Canyon" to take a trip to Japan for a month.In 1961, he assisted George Wunder on anther Caniff creation, "Terry and the Pirates", until Wunder could find his full time assistant, George Evans. Doing strips as a ghost, Fred found the time to enjoyed oil painting, creating beautiful landscape art and portraits, and even returned to Boy's Life for an occasional feature. 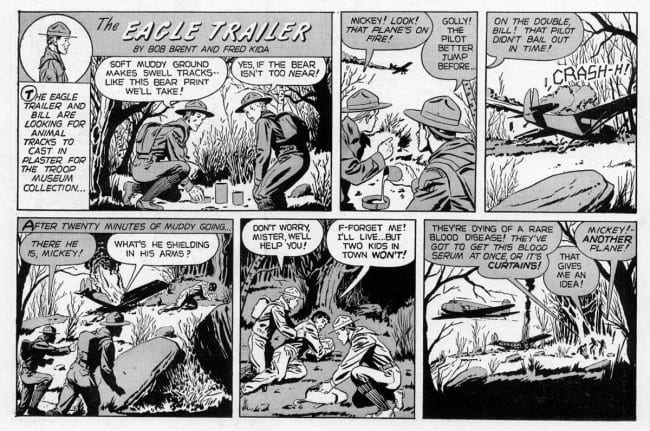 All the while, Dan Barry continued to utilize Kida's talents on "Flash Gordon" -- two months in 1961-62 until Barry moved temporarily overseas, and full-time from 1965 to 1971. Kida returned to Marvel in the 1970’s, primarily as an inker on titles like Dr.  Doom and Sub-Mariner, Inhumans, Ka-Zar, Luke Cage, Man-Wolf, Iron Man, Master of Kung Fu, and The Defenders, before doing his own pencils and inks in 1979-80 on Captain America and What If...? 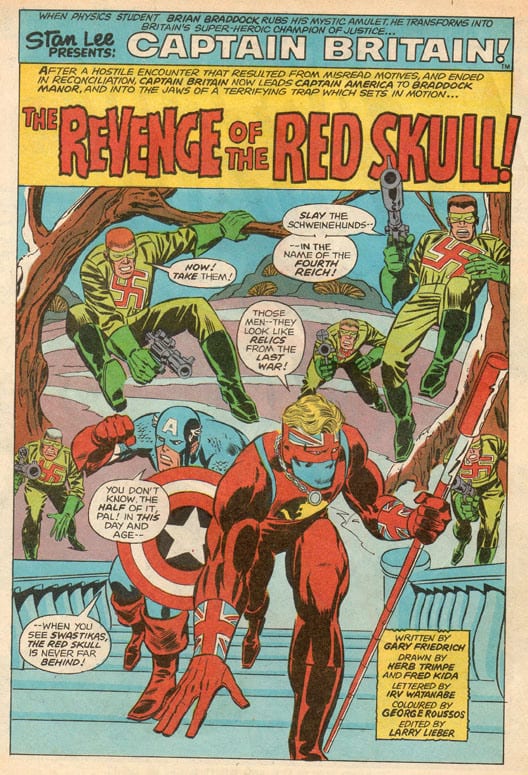 In 1981, Larry Lieber, overworked since John Romita Sr.’s departure a year earlier, had been doing double duty on both the syndicated Amazing Spider-Man and the Incredible Hulk comic strip and a replacement was needed. To ease his load, seasoned veteran Kida replaced him on Spider-Man. Fred retired from the strip and the comics industry in 1991, at the age of 70, to spend time with and enjoy his family and friends. 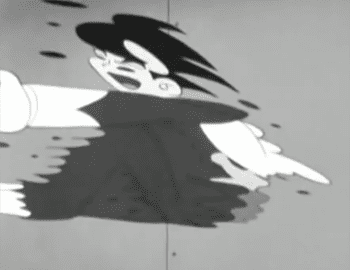 Get Out of Here, Bauhaus!