After reading several recent Koyama Press books, I searched for a shared quality I could label The Koyama Aesthetic. Couldn’t find it. Each of the five books I discuss is ‘its own thing’ — and each deserves your consideration. 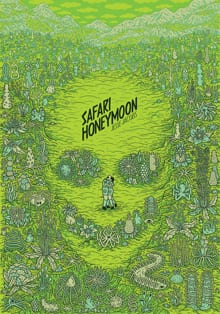 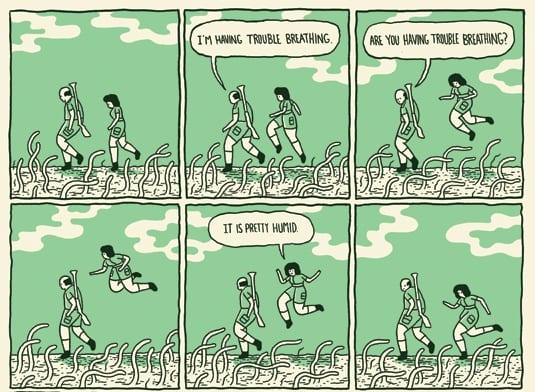 By combining scenes from a couple’s increasingly troubled vacation with semi- and non-narrative interludes about their bizarre environment, Safari Honeymoon  exemplifies Jacobs’s forward-thinking approach to comics.

This book is smart, subtle, and even inspirational, in a hard-to-articulate way. It will unnerve any reader with beautiful and grotesque scenes of natural transformation and parasitic penetration. Yet it gives off a strange kind of contemplativeness, in which things unfold organically, making great use of the comic grid’s ability to show gradual development over time. 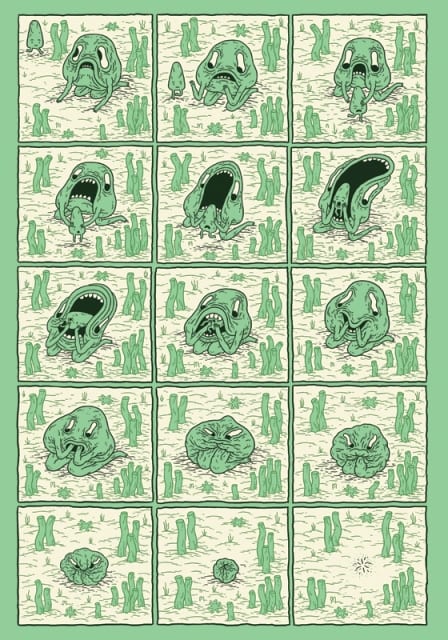 An exciting work for anyone interested in comics form and “the medium’s possibilities,” it rewards multiple readings and close analysis.

I usually don’t like it when, long before a year is over, a reviewer labels a book “one of the year’s best.” But I feel justified in making that claim for Safari Honeymoon because, for me, it’s one of the best graphic novels to come along in years. I couldn’t recommend it more enthusiastically.

Michael DeForge’s A Body Beneath 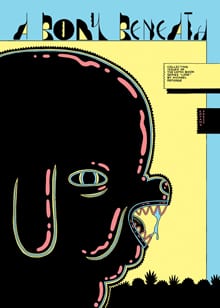 DeForge opens this collection of his Lose comics with a hyper-sparse, painfully honest strip titled “Context.” 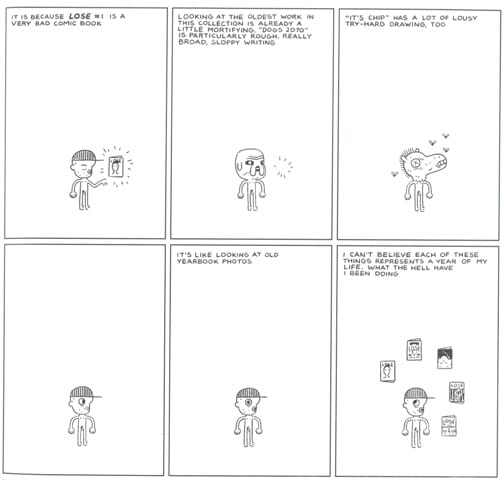 Depicted in a series of ever-changing miniature self-portraits, DeForge addresses what he views as his early works’ faults. He laments, for example, that “It’s Chip” contains “lousy try-hard drawing.” He may be right, but I simply can’t see anything bad or forced. When I first read this story in Lose #2, I was struck by the beauty of DeForge's forests, full of lush yet disconcerting groves of fruit trees and near-malignant shrubs: 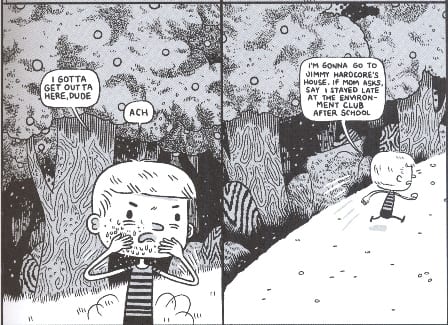 His minimalist night scenes feel effortless — the opposite of “try hard”: 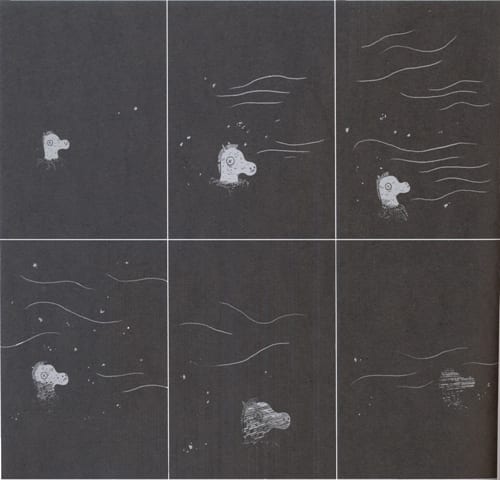 The story of a lonely, bullied boy who befriends a maggot-infested horse’s head that moves courtesy of an evil-looking beetle (!), “It’s Chip” is incredibly tender, sad, and disturbing — it’s one of my favorite comics short stories of the last decade.

In “Context”, DeForge also regrets his “broad sloppy writing” in “Dogs 2070”. But the comic’s blunt punch lines perfectly capture the frustrations experienced by the main character, an alienated and divorced dad continually slapped in the face by a family and world that withholds the comfort he needs. In both “It’s Chip” and “Dogs 2070”, DeForge shows himself to be a skillful writer attuned to our mundane needs and dark impulses, and the collection displays a sophisticated understanding of human (and non-human) nature.

I don’t know what else to say about DeForge that hasn't already been said. Though no cartoonist is without recognizable precursors, he is one the most original creators of this new century, with an instantly identifiable approach to cartooning. I don’t think I could name another ‘young cartoonist’ whose work is always so visually forceful and emotionally engaged. And I mean always. 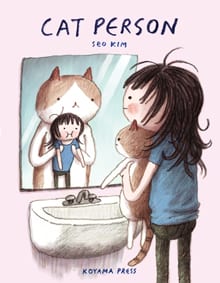 I’d be surprised to find a review of Cat Person that didn’t include the words ”cute” and “charming.” I tried to write about the book without them, but couldn’t.  So ... Kim’s collection is populated with gags about melancholy city buses, punning cocky roosters, self-assured artistic file cabinets, low-key girl-boy drama, and every-day annoyances — along with tons of charming, cute, and very funny comics about her cat Jimmy and their touching friendship. 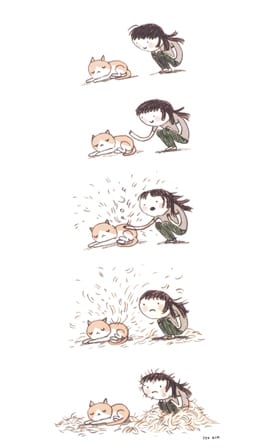 She delivers well-paced gags in unfussy drawings, many of which she gently colors with an unassuming soft palette. How does Kim manage to create comics that are so light-hearted and endearing, yet not in the least saccharine or cheesy? 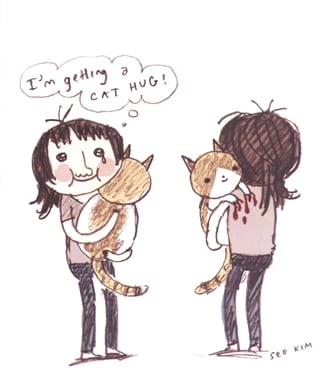 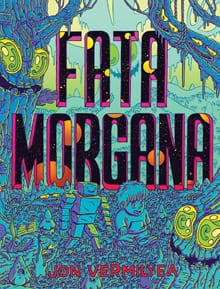 Framed with scenes of a young boy in bed, Fata Morgana recalls fantasies like Sendak’s Where the Wild Things Are and McCay’s Little Nemo in Slumberland. But in many ways, it’s more like an electric DayGlo Where’s Waldo? viewed through 3-D glasses underneath a fritzing black light. Each of the book’s stunningly-colored two-page spreads overflows with dozens of fantastic creatures — sometimes it takes a while to find the adorable protagonists: a shaggy-haired boy and his blocky robot. 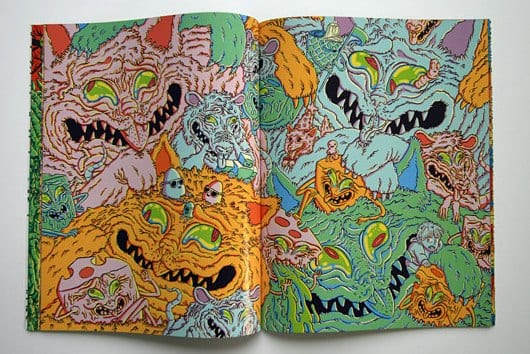 While Sendak’s and McCay’s works progress narratively, Vermilyea’s comic embraces temporal ambiguity: it may or may not deliver a plot. Each spread depicts a singular universe (with its own color scheme), yet we really don’t know if our heroes move between worlds in the gaps implied by a page turn or if these scenes just pop in and out of the boy’s mind, either during one night or over the course of many nights. (The opening scene is ambiguous; though he’s in bed, we can’t tell if he’s asleep and dreaming, or awake and fantasizing.)

One feature that suggests narrative — though it wasn’t visible to me on the first reading — is the way that the boy and his ‘bot accumulate friends, such as a ham with a walking stick (otherwise he’d tip over), three sunglass-wearing gum drops, a dog with a Christmas tree hat, a gingerbread cookie, and more such cuteness. Once each pal is introduced, he/she typically reappears in future worlds (gender is ambiguous, too). By the end, Fata Morgana looks like a team adventure comic, in which an oddball group of misfits navigate eerie locales, confront a menagerie of menaces, and become best buddies. (In another playful ambiguity, the characters are delighted by some terrifying monsters and frightened by others.) 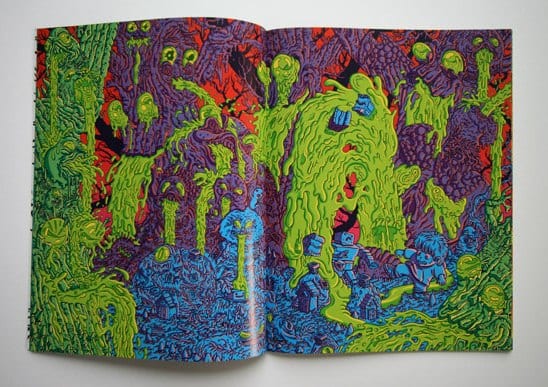 Since each spread is dense with cool and colorful things to look at, the book happily resists the conventional forward drive of a narrative. Fata Morgana invites readers to wander, immersing themselves in page after page of ever-changing, luminously colored fantasy worlds populated by beautifully drawn creatures. So look and re-look at Vermilyea’s universes very slowly. 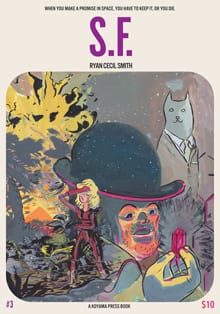 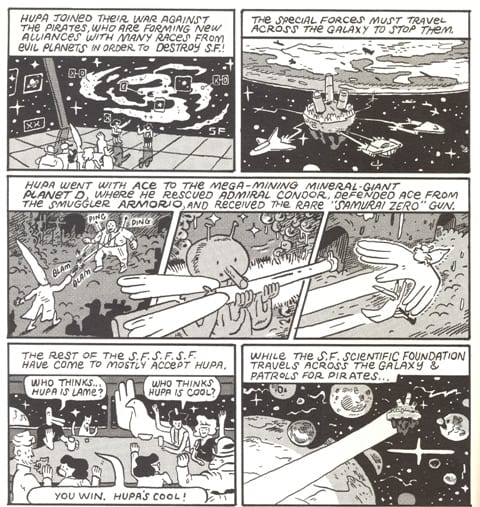 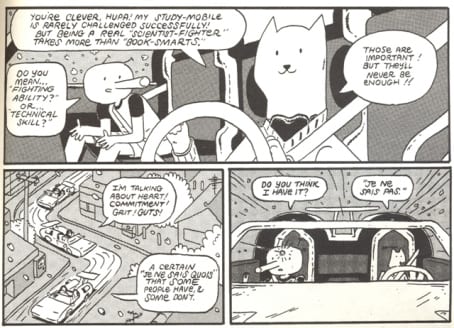 An incredibly good-natured book, S.F. #3 radiates the fan-energy of someone in love with comics and sci-fi. But Smith possesses the cartooning skills necessary to elevate the work miles beyond ‘mere fannish-ness.’ This is high quality interstellar fun. 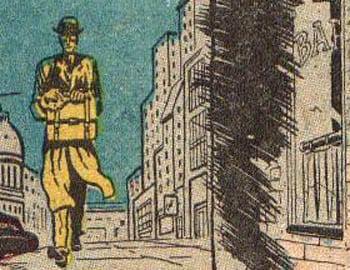 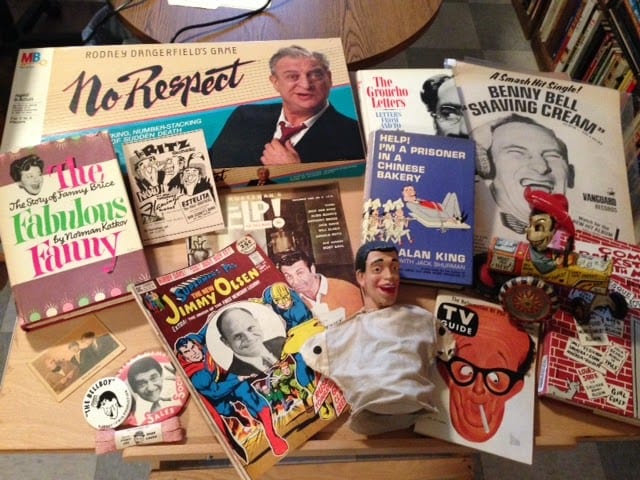