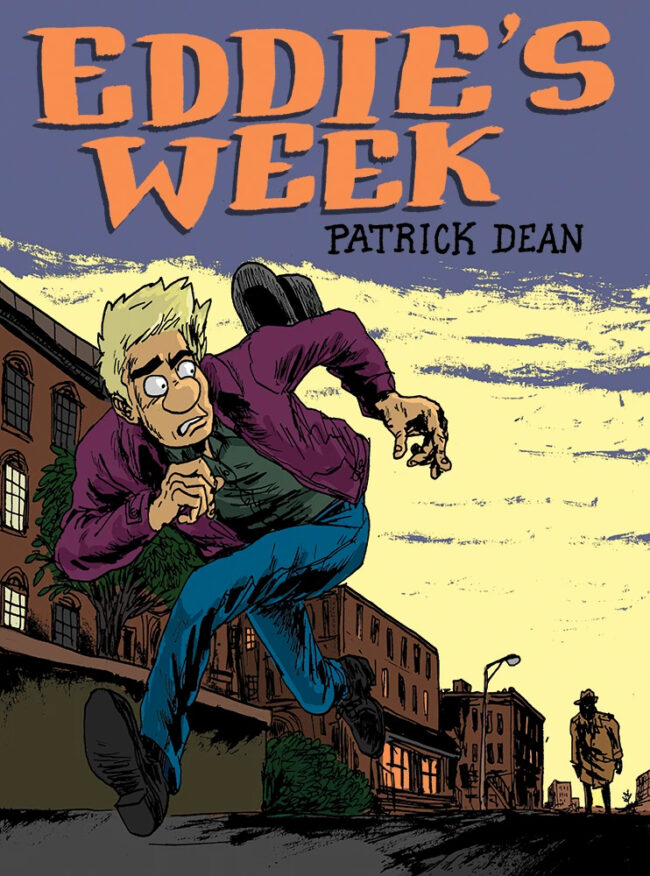 Eddie likes werewolf movie marathons, danishes and trying his hand at predicting rainy weather. Now Eddie has the week off. He was planning to take it easy at home and avoid thinking too much about his ex-girlfriend Claire, but a work crew busts into his apartment and installs a prison cell in his living room – complete with prisoner – as part of the city’s non-voluntary Stay At Home Warden Project. When Eddie’s new crush Liz stops by, Eddie weaves an elaborate yarn to explain the caged man next to his sofa. His need for deception feels silly until, as the lie inevitably cascades, it becomes clear the only rule of this world is that everything must be as hilariously convoluted as possible, while somehow staying tender, human and real.

Eddie’s Week, which is out now from Birdcage Bottom Books, starts off melancholy, gets funny, and then just keeps ramping it up by degrees until you are dizzy with the goofs. There are vampire cops, talking cats, sociopathic pastry-chefs, secret-societies of wanna-be-bears, and more twists than an Agatha Christie novel. But the melancholy lingers, keeping the characters compelling and warm. At the start of the book Eddie is feeling stuck. He’s lonely, his heart is broken, his apartment is bare after his ex moved all her stuff out. He keeps getting pushed around, and the small town he lives in feels cozy, but also like a trap. Eddie is searching for a new sense of hope in life, and somehow in the middle of mysterious murders, improbable swarms of deadly bees and madcap escapes via flying broom, he finds it. The book finishes on a perfect note: new friends, new beginnings, and as for the goofs – no end in sight. 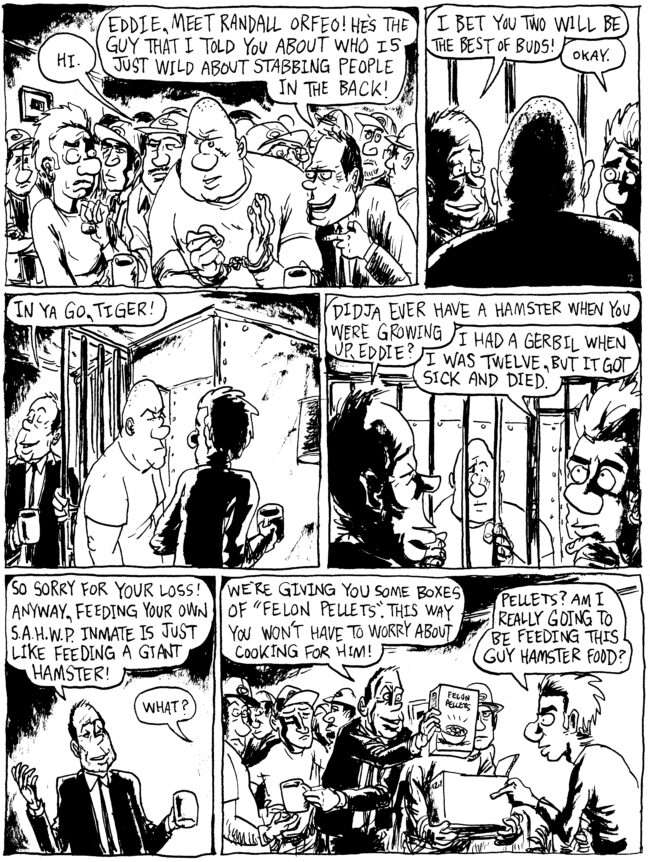 I love Eddie’s Week. Obviously I love getting to laugh – I’ve laughed loud and hard every time I’ve read it, and I’ve read it four times – and I love how the big weird mess of a plot somehow, against all odds, brings all its threads together like some sort of magic trick. And I love Patrick, who has been my friend for over 15 years. I met Patrick when I was still in undergrad studying comics. Every year my boyfriend Drew and I would drive up to FLUKE, a minicomics and 'zines festival in Athens Georgia. Patrick was one of the FLUKE organizers, and to a kid like me he just seemed unbearably cool. I spent much of my first FLUKE across the street in a pizza place fighting off a panic attack because Patrick was wearing too cool of a hat, and this was before I even knew he was a genius cartoonist. We all wound up becoming friends. Patrick is extremely funny, but he’s always been soft spoken and if you didn’t listen close you’d miss his jokes. When a bunch of us hung out together his end of the table would often erupt in laughter. You’d try to get someone to explain what Patrick had said but they would be too busy hyperventilating.

I love seeing how much of Patrick is in Eddie’s Week. Like Eddie, Patrick is obsessed with werewolves, old paperbacks and the combined gloom and joy of a big rainstorm. I like seeing Patrick’s gangly lope in Eddie, his great hair and hats, his amateur meteorology and joking asides that other characters often don’t seem to catch. Eddie’s tough, babely, wise-cracking ex-girlfriend Claire is so much like Patrick’s actual wife Erin that I feel certain Patrick borrowed some of Erin’s jokes for Claire to use. 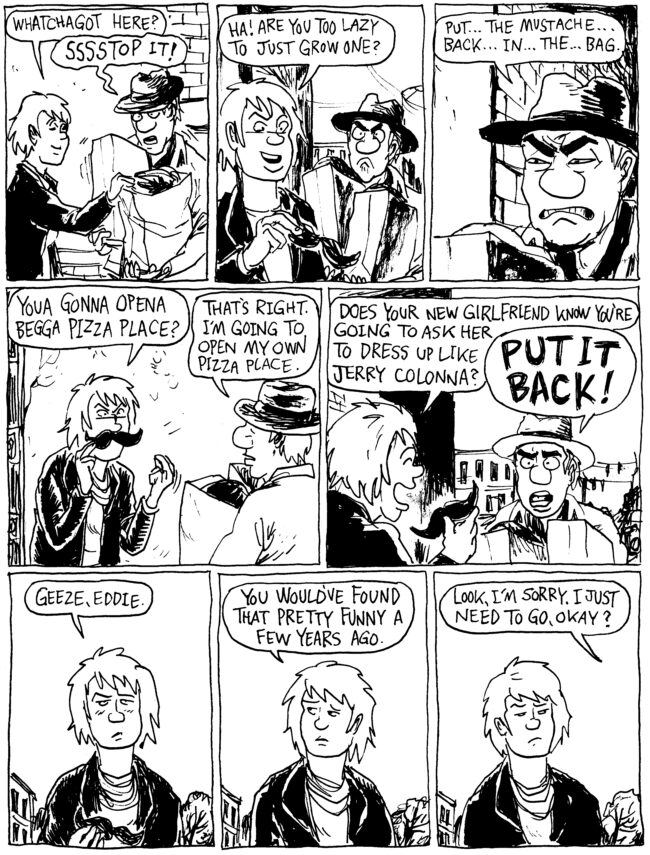 Patrick drew Eddie’s Week mostly at night, after his day job and after putting his kids to bed. He finished it shortly before being diagnosed with Bulbar ALS. Within a couple months of his diagnosis he couldn’t talk, the following year he couldn’t walk, now he is almost completely immobilized and in a wheelchair. Because his left thumb locked up and he lost the ability to text on his phone he can now only communicate using eye-gaze text-to-voice technology. I am baffled by how he does this, but with a tremendous amount of effort and set-up he still manages to draw with a pen and paper, and his drawings are still extraordinary. His drawings aren’t very funny or melancholy now. Most of them are harsh, smart political commentary. He draws about police violence; anti-black racism; voter suppression and our government's classist, ableist response to COVID-19. His drawings are sad, angry, urgent and extremely truthful. They are a gift. 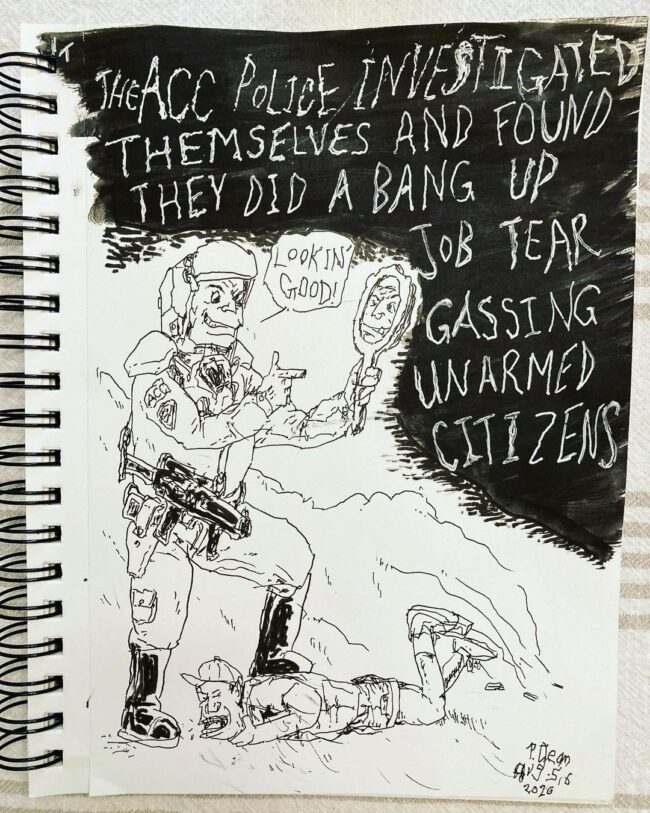 There is no silver-lining TV-movie takeaway from Patrick’s illness. It's just something that has gone horribly, nightmarishly wrong. It makes you want to rip at your hair and clothes and scream. It feels evil. There is an incomprehensible, evil thing happening to our friend. There’s nothing anyone can do about it.

Eddie’s Week feels like a precious time capsule, rewinding the world fifteen years to when we first met Patrick, before he was sick, before a lot of things. We were all younger and everything was more open and possible. Now I’m 37, Drew and I have a little kid, too many people we love are extremely ill or have recently died, there is a rising tide of inequality and hate, we’re in the middle of a pandemic, and the world is flooding and on fire. 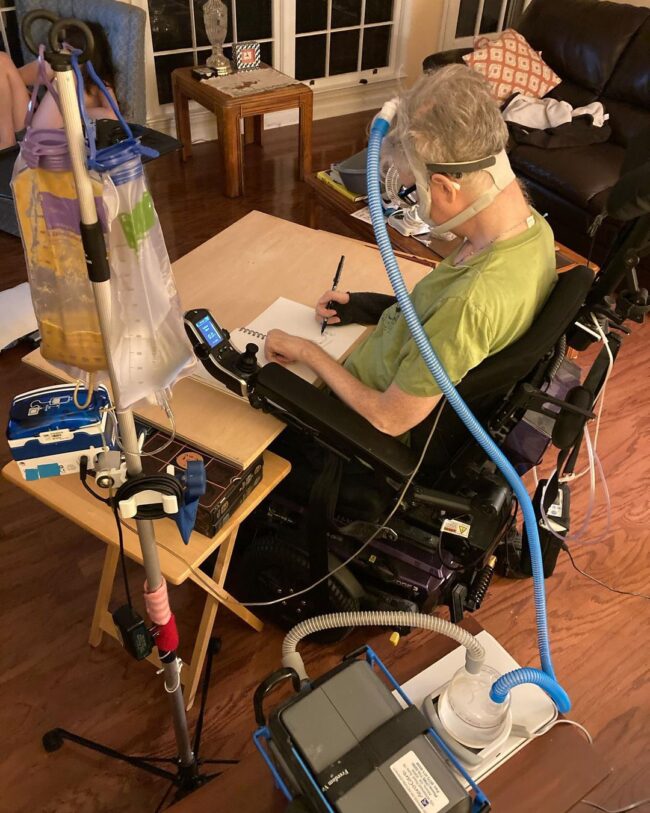 Eddie is young. He’s looking for love, a place to belong and a sense of purpose. Eddie has big worries – finding love is one of the most urgent forces in life, and losing it is one most painful experiences just about everyone seems to go through. But Eddie's are the worries of a young, healthy person without responsibilities, in a reality where cops might be (literal) blood-sucking vampires but prison is pretty easy to break out of and you can still get together with your friends at the library or for brunch. When you’re young, if a global pandemic isn’t a thing, meeting some strangers and hanging out with them drinking beer, wearing bear suits and watching shitty movies until you all crash on the carpet is a perfectly reasonable, even advisable, thing to do. Finding love and losing it and finding it and losing it again really does make you stronger. Skipping town to start all over is often the right move. Life is melancholy, but filled with hope and sweetness. Today there's a storm warning, but tomorrow they’re predicting only a 10% chance of showers — and in the afternoon, some sun.

Eleanor, Patrick and friends appeared at an event on Monday, November 23rd for Eddie’s Week and the Art of Patrick Dean: Cartooning Genius, Disability Activist, and Athens’ Hometown Sweetheart - a Virtual Book Release with Athen's Avid Bookshop. This virtual event featured an interview with Patrick Dean by Eleanor Davis as well as a roundtable with Davis, Robert Newsome, and Hillary Brown who discussed Eddie's Week, Patrick Dean's impact on Athens & comics, Big Deal, and FLUKE mini-comix/'zine festival. You can see a recording of the event at the link above. 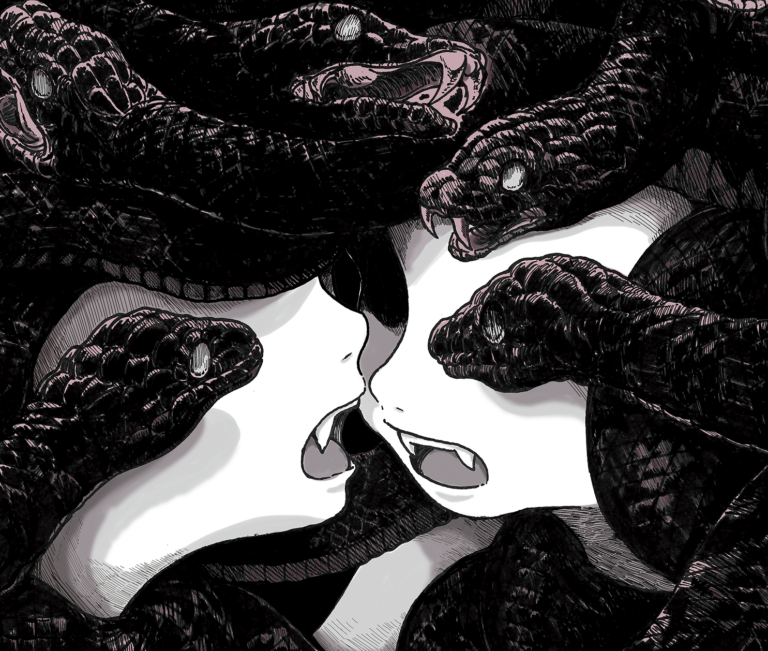 “A Different Feeling for the Reader”: Inside Glaeolia 2