At Heroes Con 2012 in Charlotte, North Carolina last month, cartoonist Ben Towle and I organized a mega-panel titled “Echoes of ’82.” We call our collaborative panels “mega-panels” because we design them to be in-depth surveys of a particular comics subject—previous Heroes mega-panels have addressed EC, the inherent silliness of the superhero genre, and the careers of Steve Ditko and Moebius—and because the panels usually run an epic two hours in length.

We organized “Echoes of ’82,” around a question: what are the comics, and comics-related events, from 1982 that continue to influence comics culture today? It was our way of celebrating the 30th anniversary of Heroes Con, which began in 1982.

We invited friends and creators to join us on the panel and to tackle specific topics. Andy Mansell waxed enthusiastic over the Doug Moench/Gene Day Master of Kung Fu. Toney Frazier provided an overview of Warren publishing (which ceased operation in 1982), which was followed by an interview with Louise Simonson, editor of the Warren line from 1974-1979. Our unit on Love and Rockets #1 featured Stergios Botzakis tracing the myriad influences on Jaime Hernandez at the beginning of Jaime’s career, and then Jaime himself was interviewed too. These people and presentations made our panel special.

And then there was Kirby content, since Eclipse comics released Destroyer Duck #1 (with a lead story scripted by Steve Gerber, drawn by Jack, inked by Alfredo Alcala) in 1982. Destroyer was a comic created to raise money for Gerber’s then-ongoing lawsuit with Marvel over the ownership of Howard the Duck, and included contributions by other creators (including Sergio Aragones, who donated the first Groo the Wanderer appearance) in addition to the primary tale. As Ben pointed out when he introduced the Destroyer Duck section of our panel, the Gerber-Kirby story is a blunt, ferocious allegory for Gerber’s own struggles with corporate Marvel: 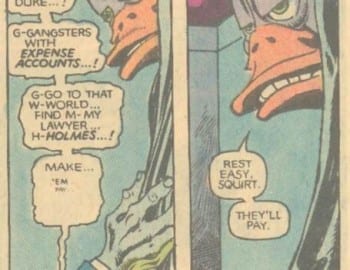 Destroyer Duck gave us the opportunity to discuss the tensions between Kirby and Marvel over the last thirty years. Ben’s introduction to the litigious context of Destroyer was followed by a commentary by Heidi MacDonald, who has seen (and sometimes covered as a journalist) the evolution of creators’ rights in contemporary comics. She also knew Jack, and spoke about what a “fighter” he was; here’s Heidi’s take on the panel and Heroes in general.

To compliment Ben and Heidi’s contributions, I asked several Kirby experts who wouldn’t be at Heroes Con to record short videos giving their personal takes on the recent Kirby vs. Marvel copyright case. Frankly, we only asked people (Charles Hatfield, Geoff Grogan, John Morrow, Steve Bissette, James Sturm) who support the Kirby heirs to make videos, partially because we feel that Kirby deserved better from Marvel, and partially because Stan Lee was a Guest of Honor at this year’s Heroes and we wanted to provide an alternative to the official “Excelsior” hype. (In his comprehensive Heroes Con report, Dustin Harbin talks candidly about the pros and cons of having Stan the Man--or was it Funky Flashman?--in Charlotte this year.)

Our Destroyer Duck section, then, ended with the video below. There are several points brought up in these videos that I hadn’t heard before in discussions about the Kirby-Marvel case, and I hope TCJ readers find the presentation edifying. My thanks to everyone, live and recorded, who participated in the “Echoes of ’82” panel, and I’d be thrilled if others made their own home-made media voicing their support for the Kirby family. 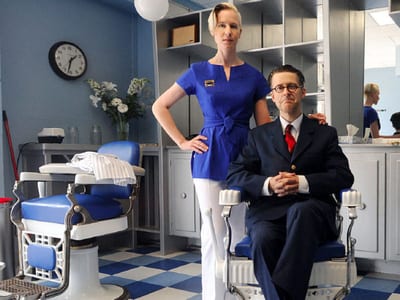 Advertising Looks and Chops a Must 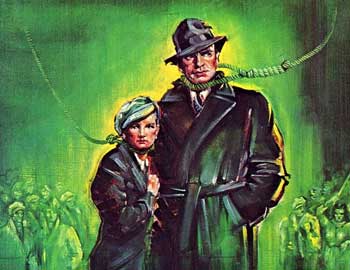