We've added a short essay by Charles Hatfield to our post of tributes to Richard Thompson.

Thompson’s passing hit me hard from two angles: a personal one, because his work had come to mean a great deal to my wife and me and because my own father has Parkinson’s; and a historical one, because Richard had come to represent, for me as for so many, the last great hope of comic strips in the newspaper funny page tradition. From my perspective, his Cul de Sac was the most refreshing newspaper strip of the past twenty years, with the richest set of loopy, endearing, maddening, beautifully cartooned characters. I consider it the last great example of the kid 'n' family domestic strip (home, school, playground, et cetera), and one of the most delightfully eccentric microcosms ever to grace the funny pages. The vein of comic strip art that includes Barnaby and Peanuts and Calvin & Hobbes also includes Cul de Sac. Once I read it, I knew, I’d never look at comic strip children the same way again.

We have also published a new review by Craig Fischer, about It Is the Bad Time, a horror anthology edited by Kazimir Lee Iskander, and featuring mostly CCS-affiliated cartoonists.

In the book’s foreword, Iskander writes that he began to assemble Bad Time “after the first anthology project assigned to the students at the Center for Cartoon Studies,” and a subsequent e-mail to Iskander clarified that Bad Time wasn’t a class assignment. It was an extra, out-of-class project for students Anna Sellheim, Cooper Whittlesey, Tillie Walden, J.D. Lunt, Angela Boyle, and Iskander himself, all of whom have clearly internalized the CCS work ethic. (Emily Parrish is also a contributor, although she has not attended CCS.) These students make plenty of finished pages, in and out of class.

Bad Time focuses on horror, specifically the aim to cultivate a sense of dread in the cartoonists themselves. Again, Iskander from the book’s foreword: “My mission statement was simple—every artist involved should write a comic that would contain at least one panel that was frightening or traumatic to draw. The comic itself didn’t need to be traditionally horrific, although many would be.” And they are, although not every story is equally successful at transmitting fear and trauma from artist to reader.

—Richard Thompson. We've already linked to many online tributes and remembrances, but they keep coming at a steady pace. Some particularly worth looking at include pieces by John Martz, Mike Rhode, and those gathered by Michael Cavna.

—Jack Davis. Patrick Dean has a nice memorial post about Davis at Playboy.

I didn’t really choose this name, which is not so much a pseudonym as a nickname. Everybody has called me this since I was 15. It’s the name of a character from a popular comic at the time [The Blue Tunics by Lambil & Cauvin, in English from Cinebook]. My friends thought I resembled Blutch, in physique and attitude. Originally, it came from the rather puerile wish to cut yourself from your background, your parents, to be reborn as someone different. And then the nom-de-plume is a tradition in comics since the 19th century, in Europe at least, like Hergé and Moebius.

At The Beat, Zachary Clemente speaks to Jason Shiga.

I guess the big theme of the book is the meaning of life or what is it that adds value to your life and I think for most of us when we’re younger, it’s about survival of a sort. You want to make money, you want to meet somebody, you want to make friends but then you become middle aged and you have all those things. You have a stable job, you’re married, you have friends, you have a house and then you start going through some sort of existential crisis and wonder “what’s the point of it all?” That would be the theme of Demon and my answer, in case you don’t want to read the book.

I can tell you now that 90% of the comic enthusiast out there today will only remember me for Star Wars, which had poisoned my career. Star Wars has sold countless millions and millions of copies and reprints over the years, while Flagg hasn’t; not by a long-shot. I’m not the sort of guy that does the work that comic book fans necessarily respond to, I’m just not and I understand that. Basically because when I started my career I wasn’t that good. By the time I was good, I just didn’t want to create the sort of work that would generate the sort of commercial portfolio that would be good for me. I just wasn’t interested. I had to find other avenues for my skill set, which I did, but at the time I wasn’t aware that I would be locking myself out of the mainstream.

The most recent guest on the Virtual Memories podcast is Andrea Tsurumi.

When I started reading her newest memoir, Something New, I knew it was about being reunited with her ex-boyfriend and their wedding. I dreaded another self-indulgent exercise. While there was some of that, I was pleasantly surprised at how homing in on an experience that was so specific, introspective and personal was so widely relatable and emotionally powerful.

Why did (and does) the comics industry and comics readers accept such a thing? Because, you see, not all comics creators were born equal. There's a hierarchy that mostly goes like this: 1) the drawer; 2) the writer; 3) the editor; 4) the inker; 5) the colorist; 6) the letterer. As you can see above the header of "White Devil ... Yellow Devil!" was erased from the republished version. This happened, methinks, because it gave the writer too much of a star status (which is too much for a # 2). This means that colors can be changed, but changing some master's drawings isn't easily accepted by readers (or should I say, watchers?).

Cotter darkens each corridor with a net of dashes, while the tech that engulfs the facility’s walls — frequently positioned behind his chatty scientists who turn to drugs, sex, or an iconic but mindless television series to stave off boredom — draws entirely on the analog control panels of vintage sci-fi films. There are glorious stacked decks with dials and screens and buttons and switches and worming ducts, each clashing with the more contemporary laptops and detailed tablet-type devices that appear elsewhere.

—Crowdfunding. John Kerschbaum and his family need financial help after their house was burned by a fire.

Czap Books is using a Kickstarter to fund their 2017 lineup, with books by Jessi Zabarsky, Kelly Kwang, and Liz Suburbia. 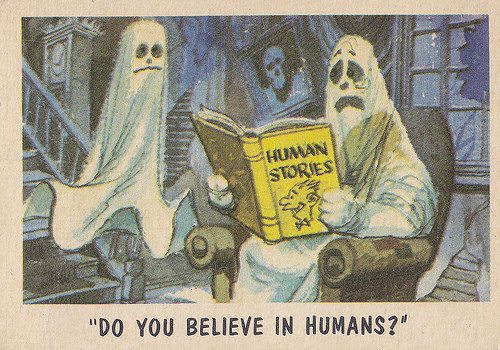 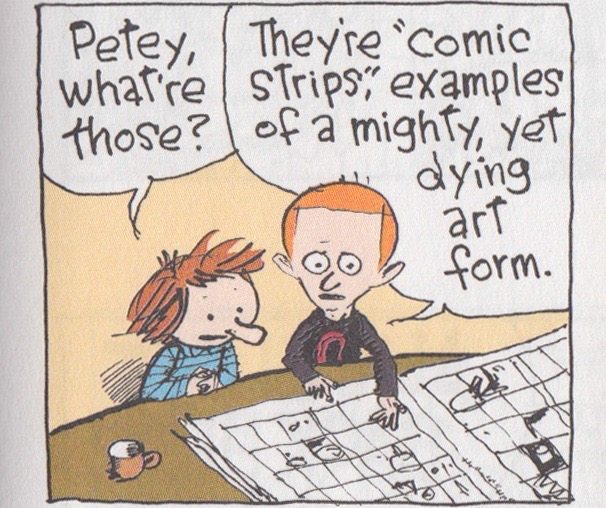 Dancing on the Manhole Cover: The Genius of Richard Thompson