It's been a big week at TCJ. Yesterday, Anders Nilsen contributed a graceful, moving, and intelligent piece about the process of helping to complete his friend Geneviève Castrée's final book.

Her lines are perfect, exquisite, and minute. She often worked at nearly the same size at which her work would be printed, which is to say: small. The level of detail is astounding. Her drawings are little wonders. The best artists are like great athletes in that they make what they do look easy. You watch Serena Williams play tennis or Luan Oliveira skate a ledge and it looks so fluid, it feels in your bones like, yes, of course, I could do that, too. And if you try, you find out that it’s a delusion, that it actually took ten thousand hours of practice. It took inhabiting a particular body and mind in a particular place and time in the world. It’s from tracing certain motions every day for years, weaving a path through and between the artists that inspired you as a kid and the colleagues who excite you as a working artist. That feeling of effortlessness is a smokescreen, and even, in a way, a raised middle finger, to the immense amount of time and luck that it takes to get that good. I felt this very keenly when, after Geneviève died of pancreatic cancer in 2016, I sat down to finish my friend’s last book myself. It looked easy. I could feel the movement in my bones. But actually getting it down on paper was far from simple.

Geneviève had been ill for about eighteen months when she died. I knew she was occupying herself with various small projects. She would tell people she wasn’t working, she said she didn’t want to answer the question. She’d say that she was focused on getting well. But every time I went to visit her at her home in Anacortes, Washington, there were little piles of drawings or embroideries on the table next to the couch, on which she spent her days. And it turned out that in the last several weeks that work became more focused. Two days before her death, she sent me a photo of an unfinished drawing for that book, with the accompanying text: “I don’t like to share things before they are finished, but here is what I am doing with my days (while not gasping for air).”

Tegan O'Neil is here with her latest column, this time about Steve Ditko's Shade the Changing Man.

Sanity is very much a binary choice in the original run of Shade the Changing Man. The story is almost Lovecraftian in terms of the attention paid to the sanity of its hero. The difference is, of course, that madness is inevitable in Lovecraft’s world – inevitable at least for any human who persists in seeking forbidden knowledge. Madness for Steve Ditko here appears to be a malady against which a superior specimen – aided by superior technology, in this instance – might somehow resist.

Why is this preoccupation with madness and sanity so important to this series? Shade is a paranoid book. Literally every member of the cast is suspicious of every other member of the cast, down to parents, children, and lovers. Everyone in the Meta – the rather faceless and indistinct alternate dimension that Shade calls home – is a cop of some kind, or a criminal, or a criminal masquerading as a cop. If you’re not actively working with the Metan government to stamp out crime then you are probably a criminal yourself, let’s just say.

The reader will search in vain for any sign on the part of the author that the obsessively carceral world of Meta is not in fact the oppressive dystopia it appears on first, second, and eighth blush. Every third word out of every character’s mouth is an accusation of treason – perhaps an exaggeration, but only just. The Metan Secret Service, of which Shade served as a member, doesn’t really appear to have a set remit other than the general homeland protection shtick. Business is paranoid hypernationalism without a specific focus besides its own perpetuation and business is very good.

What’s most striking upon actually reading the first half of the original Devilman (available in English for the first time in three decades after publisher Seven Seas fished it from the licensing hell Glenn Danzig’s vanity press Verotik's brutal mishandling once stranded it in; the second half will follow in October) is how wrong everyone – not just the fans, not just myself, but Yuasa and Okouchi, as well – got it.

—News. The Jerusalem Post has fired its longtime cartoonist Ari Katz after he drew an Animal Farm-referencing cartoon of Netanyahu depicted as a pig.

The publication of the cartoon on Tuesday in the Jerusalem Report, a biweekly magazine published by the Jerusalem Post, was met with praise by some and anger by other social media users, with many objecting to his portrayal of the Likud politicians as pigs, which are perceived as among the most ritually impure animals in Judaism.

Following the uproar, the Jerusalem Post announced it would no longer work with Katz.

“Avi Katz is a cartoonist who worked as a freelancer at the Jerusalem Post and in accordance with editorial considerations, it was decided not to continue the relationship with him,” it said in a Hebrew-language statement.

—Reviews & Commentary. Comedy Central's Jim Jefferies Show recently broadcast a sequence interviewing and mocking a prolific anti-diversity-in-comics advocate (read: bigot). This set off a debate online between people who welcomed the critical attention as long-overdue and those who felt it only served to magnify the bigot's profile. It's a complicated, difficult-to-parse issue, especially in the wake of the 2016 election and the media's arguable complicity in it, and one that I am not at all confident I know how to answer correctly. I think many people may overrate the power of public mockery to marginalize hard-right politics. On the other hand, ignoring these figures is unlikely to make them go away. We have to figure this out.

The most prominent device of “Your Black Friend” is its conspicuous, insistent use of the intimate, accusatory “you” (“How you use him like an information desk for black people”; “When you forget yourself”). In this, as in many other aspects, it recalls Claudia Rankine’s “Citizen: An American Lyric,” which is also distinguished by its repeated “you” (as well as a focus on white friend failure, and the relationship between word and image). But Rankine’s “you” is largely an address to self while Passmore’s is an accusation that feels leveled at readers, pointing to their complicity. It is urgent and productively uncomfortable. “Your Black Friend” is not just a takedown: The narrator himself is vulnerable, as when he reveals that he feels personally mocked by his friend’s thoughtless “black” presentations, and that as a child he would suck his lips in to make them look thin like Leonardo DiCaprio’s.

—Misc. The Believer has posted its full archives online, including its very strong pre-2015 comics features, which were edited by Alvin Buenaventura.

I’ll Assign This Treason Case to You 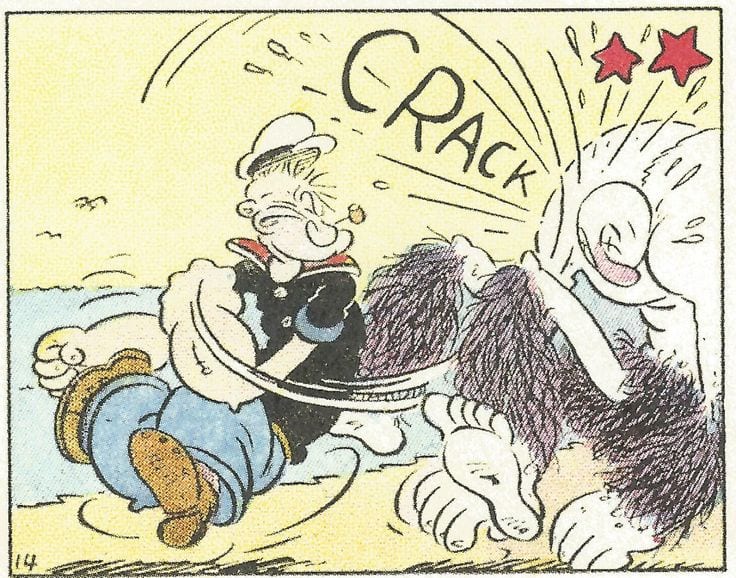