With the death of Dennis “Denny” O’Neil on June 11, 2020, we mourn the passing of a writer/editor who helped mainstream American comics grow up by introducing darker and more socially conscious themes into superhero comics. He wrote and edited various Batman titles for many years, including the prose adaptation of the popular Batman: Knightfall story arc as well as novelizations of the Christopher Nolan films The Dark Knight and Batman Begins. But it was his work on the groundbreaking Green Lantern/Green Arrow title, which began in 1970 (done with artist Neal Adams, who also drew some of O’Neil’s darker Batman stories) that may have had the most memorable impact on the field.

He is also highly regarded for his writing on The Shadow with artist Michael Kaluta both for the 1970s comic book series and, later, a graphic novel entitled: The Shadow: 1941 (Hitler’s Astrologer) done for Marvel in 1988. Another notable accomplishment was a critically successful run in the late 1980s on The Question with artist Denys Cowan. Beyond his voluminous bibliography at Marvel, DC and Charlton Comics, O’Neil wrote scripts for the Batman: The Animated Series and other television shows, both inside and outside of the DC Universe, such as G.I. Joe: A Real American Hero, Logan’s Run and Superboy.

Born on May 3, 1939 into a St. Louis, Missouri, Irish Catholic household, he recalled going to the store on Sunday afternoons to buy groceries and the occasional comic book. He attended St. Louis University, where he studied English Literature, Creative Writing and Philosophy. After graduating in 1961, he joined the U.S. Navy and served aboard the U.S.S. Champlain during the United States naval blockade of the Soviet Union while the Cuban Missile Crisis played out. Following his Navy service, O’Neil became a journalist with a newspaper in Cape Girardeau, Missouri, where he penned a bi-weekly column for the paper’s youth page. In the summer, when there was little to report, he wrote stories about the regrowth of the comics business, following the anti-comics hysteria of the 1950s. One person who noticed O’Neil’s columns was Roy Thomas, who lived in St. Louis at the time and would become a colleague of O’Neil’s before the ’60s were over.

Although O’Neil is generally associated with his DC Comics output, he actually started his comics career writing for Marvel. Thomas preceded O’Neil at Marvel in 1965, eventually becoming one of Marvel’s most prolific and popular writer/editors. It was Thomas, in fact, who suggested that O’Neil take the Marvel writer’s test, which was writing dialog for a four-page sequence of a Fantastic Four story. In later years, O’Neil swore he had never had any ambition to become a comics writer and only did the writer’s test as a lark. However, he was in the right place at the right time and, although Stan Lee had hired Thomas to take up some of the writing chores for Marvel’s expanded line of titles, he needed even more writers, and so he hired O’Neil. O’Neil did a total of six Dr. Strange scripts for Strange Tales, and dialogued some issues of Millie the Model and The Rawhide Kid as well as writing 13 pages for a Daredevil script that Lee had left unfinished. O’Neil, working for the first time with Neal Adams, also revived Professor X in X-Men #65. However, writing opportunities at Marvel soon evaporated, leaving O’Neil out of work, so the novice comics writer went over to Charlton Comics, writing under the pseudonym Sergius O’Shaugnessy. He worked at the low-paying, bottom-of-the-barrel publisher for around 18 months, under the editorship of Dick Giordano; including Abbott and Costello #1, a run on Thunderbolt issues #58-60, and a script for Space Adventures #2, among others. When Giordano migrated over to an editorial job at DC, he took some of his freelancers, including O’Neil, with him.

Among O’Neil’s earliest assignments at DC was writing scripts for the Steve Ditko-created character The Creeper. He also wrote scripts for Justice League of America, and embarked on what would be one of his least successful character revamps, updating Wonder Woman by taking away her powers and turning her into a karate-chopping spy whose sidekick was a blind Asian mystic named I-Ching. The fans hated it, Gloria Steinem hated it, and sales on the title tanked, but it did offer a window into the kind of "socially conscious" writing that O’Neil and Adams would soon do with the Green Lantern/Green Arrow title.

A story by Bob Haney and Neal Adams for Brave and the Bold, which teamed Batman with the Green Arrow, provided a visual revamp of the character that O’Neil seized on and ran with during his time on the book in issues 76-86. Teamed once again with Adams, O’Neil changed Green Arrow from being a cheerful, wealthy playboy into a cynical social critic and warrior for the downtrodden masses, in the process taking on themes like industrial pollution, and religious persecution. The first issue of this short, radical series-within-a-series tackled race, and included what is probably the most famous and arguably the most powerful three panel sequence ever drawn by Adams. The most controversial story appeared across two issues when O'Neil and Adams took on drug addiction, a highly contestable issue at the time. In a two-issue, non-Comics Code-Approved story arc in issues 85 and 86, it was revealed that Oliver Queen’s ward Speedy was a junkie. The story caused a sensation and O’Neil went almost overnight from being an obscure, hard-working comic-book creator to being a minor celebrity. He was mentioned in The New York Times and invited to appear on a number of TV talk shows. It raised O’Neil’s profile on the national level, but was an unsettling experience for the shy and modest writer. 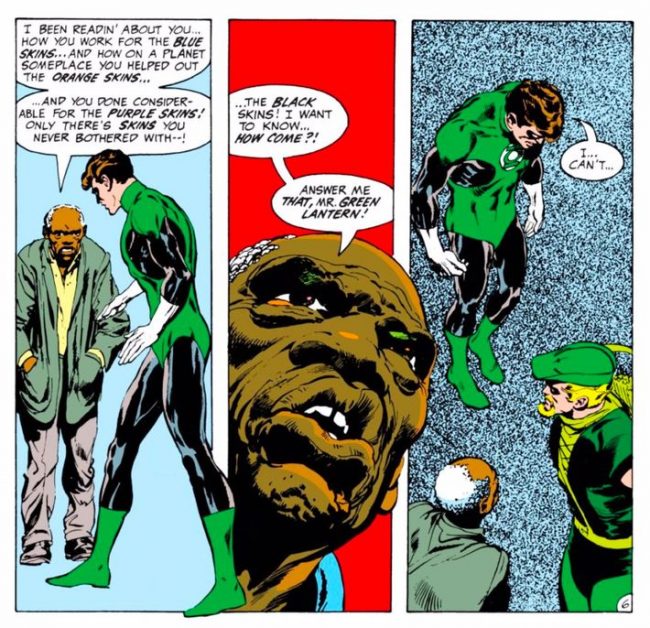 While those Green Lantern/Green Arrow stories are arguably his most famous work, O’Neil may be best known by superhero comics fans for his revamping of Batman, which swept away the last vestiges of the camp period and brought the character back to the mood of his earliest stories as a grim, mysterious avenger. As comics historian Les Daniels noted in the pages of DC Comics: Sixty Years of the World’s Favorite Comic Book Heroes, “O’Neil’s interpretation of Batman as a vengeful obsessive-compulsive, which he modestly describes as a return to his roots, was actually an act of creative imagination that has influenced every subsequent version of the Dark Knight.” Among his other accomplishments with Batman, O’Neil also co-created (with artist Bob Brown) R’as al Ghul’s daughter Talia, who would become a love interest for Batman, revived the long-dormant villain Two-Face and gave the Joker a creative shot in the arm with the story “The Joker’s Five-Way Revenge!” in Batman #251, a tale that reminded readers that the Joker was a homicidal maniac who delighted in sowing chaos and destruction.

The 1970s was a fertile period for the prolific O’Neil. After long-time DC editor Julius Schwartz took over the Superman editorial reins, he brought in O’Neil to shake things up. Among O’Neil’s biggest changes were destroying all the Kryptonite on Earth and having Clark Kent become a TV reporter. In 1973, O’Neil revived two classic characters, the original Captain Marvel (with art by CM’s original artist C.C. Beck), and pulp and radio stalwart The Shadow, with evocative art by Kaluta. One of the projects that brought O’Neil additional mainstream press was the much-hyped Superman vs. Muhammad Ali comic, which was based on his story that Neal Adams adapted into a script.

In 1980, O’Neil left DC for a six-year stint at Marvel Comics working as both writer and editor. He wrote The Amazing Spider-Man for a year, including two Spider-Man Annuals that were drawn by Frank Miller. O’Neil was the regular writer on both Daredevil (1983-1985) and Iron Man (1982-1986) and introduced Obadiah Stane (The Ironmonger), while sinking Tony Stark deep into alcoholism. His stint on Daredevil spawned the popular villain Lady Deathstrike. While working up the concepts for The Transformers comic series, O’Neil came up with the name Optimus Prime for their leader, a detail that made it into the Transformers film series. As an editor, O’Neil is credited with helping artist Bill Sienkiewicz refine his skills on Moon Knight, one of many budding talents O’Neil encouraged over the years.

By 1986, O’Neil was back at DC and was made editor of the entire Batman line, a position he held until 2000. In 1987, O’Neil took on writing the former Charlton character The Question, a character he made uniquely his own, aided by Cowan’s beautiful and evocative art. During his tenure at DC, O’Neil would return to writing different Batman tales again and again, as well as scripting Green Arrow, including the annuals between 1988 and 1990.

Among the many honors bestowed upon O’Neil during his long career were Shazam Awards for Best Continuing Feature (Green Lantern/Green Arrow), Best Individual Story “No Evil Shall Escape My Sight” (Green Lantern/Green Arrow #76), Best Writer (Dramatic Division) in 1970 for his work on Batman, Green Lantern, Superman, and other titles, and in 1971 for “Snowbirds Don’t Fly” in Green Lantern #85. He was also given a Goethe Award in 1971 as Favorite Pro Writer and was nominated for the same award in 1973. He also shared a 1973 Goethe Award (with Adams) for Favorite Comic Book Story for the GL/GA story “No Evil Shall Escape My Sight.” The San Diego Comic-Con gave him an Inkpot Award in 1981, and in 1985, O’Neil was included in DC’s 50th Anniversary Publication, Fifty Who Made DC Great. In the late 1990s, O’Neil shared his experience with School of Visual Arts students in his Writing for the Comics course, and in 2001, wrote The DC Comics Guide To Writing Comics.

When asked in a 1995 interview about the reasons for Batman’s enduring popularity, O’Neil’s answer was characteristically modest and thoughtful: “It's sort of like confronting everything that's dark and ugly in our human nature and in modern life, which is essentially city life, but then delivering the reassuring message that, yeah, despite how scary this is, ultimately everything is going to turn out all right, that these things can be ultimately used for good, even though they seem evil.” 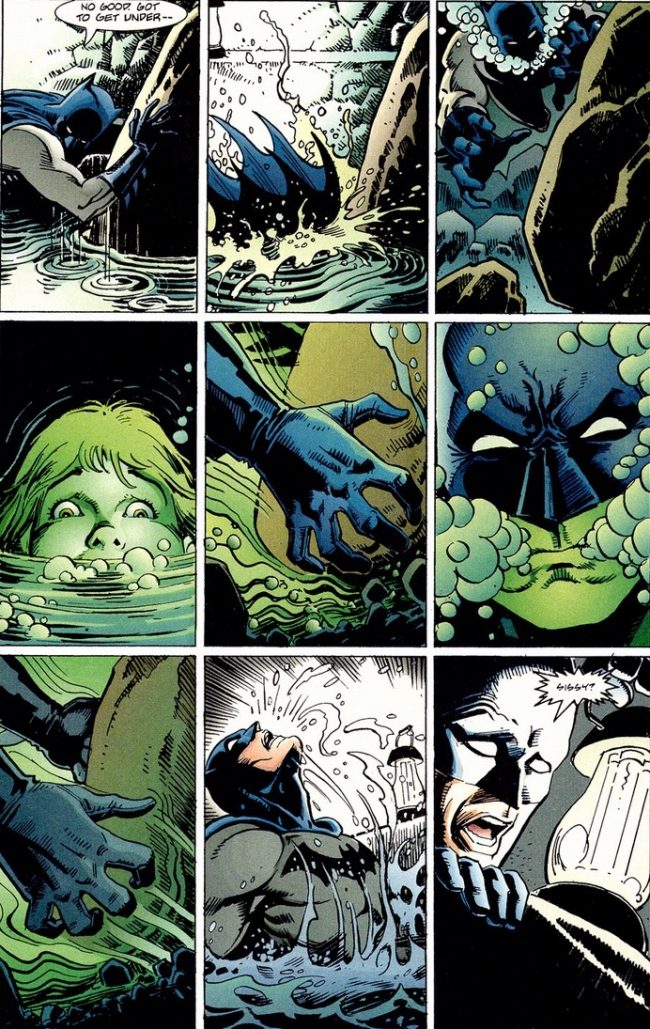 He was one of the most well liked editors in the business, and colleagues, posting on Facebook, were lavish in their praise of the comics veteran.

Artist Joe Staton: “His scripts that I drew were pretty old-fashioned superhero team-ups. But I worked on Slaughter of the Innocents (originally titled Suffer the Children) with Denny and Bill Sienkiewicz, thanks to editor Scott Peterson. It was a one-shot to help support Senator Leahy's campaign to ban landmines and I was very proud to be part of this. And in terms of characterization, when the go-to cliché for Batman is nearly psychotic anger, Denny showed us that the heart of Batman can be sadness.”

Artist Bill Sienkiewicz: “He was a kind man with an acerbic edge, a giving soul, wickedly funny, and an incredibly talented writer who penned some of the greatest comic stories ever told. He was also my first comic book editor on Moon Knight, which, as a fan of his work, was intimidating as hell. He made me up my game. More, he took time out of work life to become a friend, one who generously gave of his personal time to talk from experience and of demons, to a young farm kid from New Jersey about the path of self-destruction farm kid was heading down because of farm kid's drinking. Not many folks will step up like that. Denny did, and I will be forever grateful.”

O’Neil was 81 at the time of his death, having been predeceased by his wife Marifran O’Neil in 2017. He is survived by his son, writer and filmmaker Lawrence O’Neil. 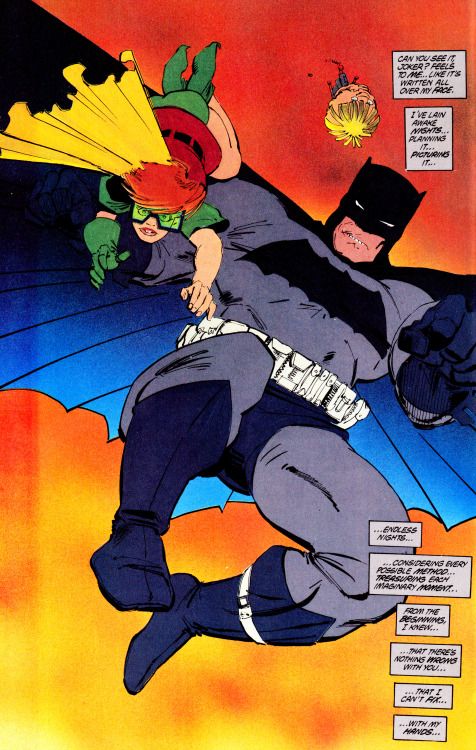 Crawling In My Skin – This Week’s Links 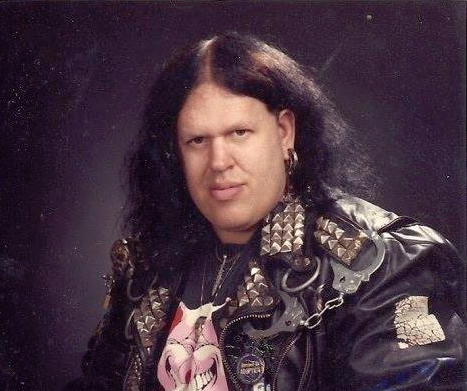