I'm not supposed to be here this morning, but Dan got married this weekend, so he gets a short reprieve from blogging. Today, we're happy to present for the first time a twenty-year-old, never-before-published interview with Daniel Clowes, originally conducted by Zack Carlson for the fanzine Meatnog. It's always interesting to read decades-old comics business talk:

CARLSON: Since you’re doing animation right now, has there ever been a point where you feel like you’ve done comics and you want to move on to something else?

CLOWES: I never get tired of what I’m doing. I’m always challenged. Comics are really difficult because you’re doing writing, storytelling, and you have to learn so many things that you’re just constantly improving.

I still have tons of stuff that I want to get done, but I get really frustrated with the business of comics, having to sell my stuff to superhero fans. There just aren’t stores for the type of comics that we do. There are alternative record stores that also sell comics, but they don’t really know how to actually sell them. It’s really irritating, and I’ve felt like quitting because of that. I hear stories of just … stupid comics selling millions of copies and that gets to me sometimes.

But the truth is that I’d probably keep doing it even if I only sold a hundred copies. I just wish I could reach the audience that I know is out there for this kind of thing. There has to be at least a hundred thousand people that would enjoy these types of comics, and they’re maybe getting to ten thousand.

CARLSON: But in the last couple years, your art has been able to reach more people, if not specifically Eightball. Even this music video —

CLOWES: That’s true. But somehow that doesn’t translate into people buying comics. People might see this Ramones video and like the artwork, but they’re never going to be in a comics store. Maybe if Eightball was sold in Waldenbooks at the mall, these people would run across it, but nobody but deviants go into comic-book stores. Certainly no girls will go in. People have to know about something and actually go in looking for it. It’s a real problem. It’s not something that’s gonna get picked up as an impulse buy. And the people who are going into comic shops mostly aren’t interested in Eightball or the other good comics that are being produced today. Sad, but true.

A collective of over 100 female comics creators has created a website addressing sexism in French comics. Most of their site is in French, but they have posted an English translation of their charter statement. (via Heidi MacDonald.)

—Crowdfunding. Artist/teacher/TCJ columnist Frank Santoro has launched an Indiegogo campaign to fun a new school for comics creators in Pittsburgh. Even if you don't contribute that's a fundraising pitch that no one should miss, and something that only Frank could've created. 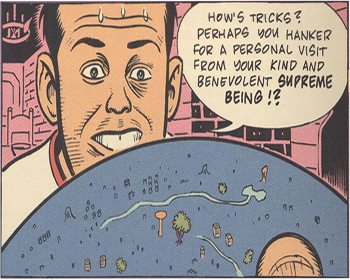 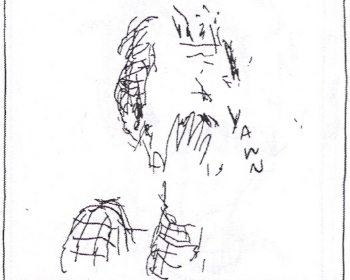