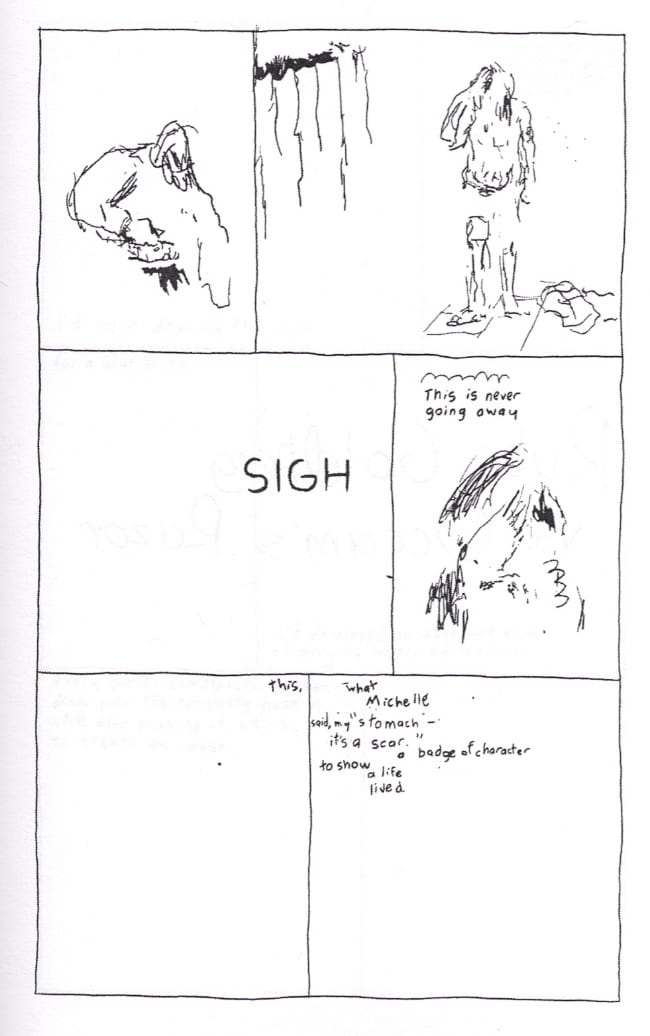 Always enjoyed this piece by Jason Overby - "Bildungsroman", from his minicomic Solipsist's Doodles. I thought about it pretty often when I was losing weight a few years back. There's a new collection of Overby's work out now from Gridlords, titled The Being Being; a very compact softcover, slightly shorter and wider than Jeffrey Brown's old relationship books. I figure I should list it up here, as I don't know if Diamond distribution is something that is possible or even desirable here. The small size doesn't always work in the art's favor -- the lettering in one comic, Compression, becomes difficult to even read in parts, which is troubling for a piece that explores the positioning of continuous statements broken across successive panels, balloons, and other comic devices -- but it's useful nonetheless to have 215 pages of this work in one place, as I find Overby's fascination with apportioned time susceptible to variations, best observable as placed in proximity...

I also got a cassette tape with my order, but I don't have anything to play it on. I hope it isn't a ransom demand. 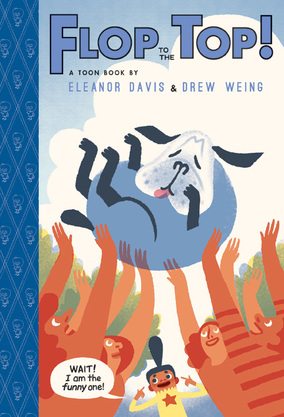 Flop to the Top!: Being a 40-page Toon Books hardcover from Eleanor Davis & Drew Weing - a total collaboration, with both creators working on the story and the art. I've read this, actually, and while on the surface it seems like a silly story about a little girl who treats everyone as her inferior on a delusional path to social media celebrity, only to witness her dog *actually* become a viral superstar with seemingly no effort whatsoever, I interpreted it as more a parable of professional jealousy - a slapstick sibling to James Sturm's The Sponsor, albeit with far more in the way of antics and color, and also a far more explicit delineation of the authors' intentions in the tradition of pedagogical children's literature. It's pretty funny; $12.95. 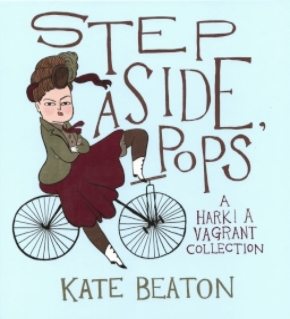 Step Aside, Pops: A Hark! A Vagrant Collection: I don't need to write one word about this, but for the record - a 160-page hardcover collection of humorous historical webcomics by Kate Beaton, one of the most fervently admired cartoonists of her generation. Drawn and Quarterly publishes, as with the 2011 predecessor titled simply Hark! A Vagrant. Samples; $19.95.

Written and Drawn by Henrietta: More from Toon Books, this time a 64-page work from the Argentine cartoonist Liniers, presenting both external views of a small girl as she tries to draw her own book, as well as generous depictions of the resultant colored pencil art. I understand a Spanish-language edition (Escrito y Dibujado por Enriqueta) will be released simultaneously, though it doesn't appear Diamond has that on its list; $12.95.

The Hic & Hoc Illustrated Journal of Humo(u)r Vol. 2: The United Kingdom: Another Hic & Hoc prize arriving in comic book stores via Alternative Comics, this time a 72-page anthology of funny comics from the UK as edited by Joe List & Lizz Lunney. Luke Pearson, Joe Decie & Philippa Rice are among the contributors; $12.00.

Fires Over Hyperion: Writer/artist Patrick Atangan has cultivated a pretty extensive catalog with NBM, and this is their latest release - a 6" x 8", 96-page autobiographical comic about his romantic travails with men, rendered in swipes of digital color and flat graphic elements. Preview; $14.99.

Moomin: The Complete Lars Jansson Comic Strip Vol. 10 (&) Moomin and the Martians: A pair of all-ages releases from Drawn & Quarterly, each one honed in on a different artist. The Complete Lars Jansson unsurprisingly collects another 112 pages' worth of the Moomin newspaper strip from London's The Evening News, still helmed by Lars in 1964 (as it would be for more than 10 years subsequent), in the series' usual 9" x 12" format. Moomin and the Martians is an 8.5" x 6" landscape book of 40 pages, presenting a 1957 storyline from that same strip back when original creator Tove Jansson was still drawing, now in color; $19.95 (Lars), $9.95 (Martians).

Master Keaton Vol. 4 (&) Astro Boy Omnibus Vol. 1: Two 'vintage' manga presentations for your pleasure this week. VIZ is really storming through Master Keaton, a mostly-episodic 1988-94 insurance investigation mystery/thriller series from Naoki Urasawa, Takashi Nagasaki & Hokusei Katsushika, although with 12 or 13 of these things coming I guess speed is a virtue. The short-form nature of many of these stories has already begun aggravating Urasawa's drippier sentimental tendencies, but I'm still on board. Astro Boy, meanwhile, crams three volumes' worth of Osamu Tezuka's signature children's SF comic into a 688-page brick, including the storyline which formed the basis for the later Urasawa-fronted series Pluto. You may recall a one-off prior attempt on the part of publisher Dark Horse to double-up Astro Boy reprints, but this one already looks to be solicited through vol. 2, so it may yet stick. Astro samples; $19.99 (each).

Tokyo Ghost #1: Your Image debut of the week is a new ongoing series featuring the work of artist Sean Murphy, one of the most vivid guys working consistently in front-of-Previews serialization. He is joined by colorist Matt Hollingsworth and writer Rick Remender for a scenario concerning addictive future technology and the gang enforcers who find it taking them to an unusual Japan. Preview; $3.99.

Judge Dredd - Day Of Chaos: The Fourth Faction: Speaking of future shock, here is Simon & Schuster's North American-targeted edition of the 192-page first half of a prolonged 2011-12 Judge Dredd storyline written by co-creator John Wagner, in which systematic threats work to unravel the social fabric of the title character's sprawling city beat. The second half should follow next month; $24.99.

The Bozz Chronicles: A Dover Publications collection of a 1985-86 Epic Comics series created by David Michelinie & Bret Blevins, with additional contributions by John Ridgway and Al Williamson - mixing outer space visitation and Victoriana, it's one of those back-issue bin curiosities beloved enough by a small group of enthusiasts to eventually propel the whole thing onto bookshelves. Brandon Graham provides a foreword; $19.95.

Frank Frazetta's The Adventures of the Snow Man: A 16-year old Frank Frazetta made his professional comics debut in collaboration with John Giunta in Tally-Ho Comics #1 with an odd story about a two-fisted snowman who battles villainous grotesques and dodgy caricatures. However, this 104-page, 9" x 6 3/8" landscape-format Dark Horse hardcover seems formatted more along the lines of Snow Man booklets Frazetta would produce on his own, leading me to believe this package actually contains one or more of those works. Plus, none of the preview art matches, and the publisher is claiming this is the "first time" the stuff is in print. Regardless: very, very early Frazetta of some sort here. Samples; $14.99.

Double Take Super Pack September 2015: And finally, proving that all of us will one day rise from our sleep so the world will know us again, millennial Marvel front-man Bill Jemas reappears at the fore of startup publisher Double Take -- the comics arm of Take Two Interactive, owner of the studios behind the Grand Theft Auto and BioShock gaming franchises -- for a suite of ten (10) new comic book series with designs on extrapolating an "Ultimate" mythos from the (helpfully public domain) 1968 film Night of the Living Dead. You may balk, but a Kickstarter campaign from earlier this year raised close to $17K, so clearly this brand of multi-tiered nostalgia carries some appeal for segments of the funnybook audience. This Super Pack buys you access to each of the first issues (I spy Jemas story credits!), though you can also buy them individually for $2.50 a crack, if your local shop elected to carry the weight; $20.00. 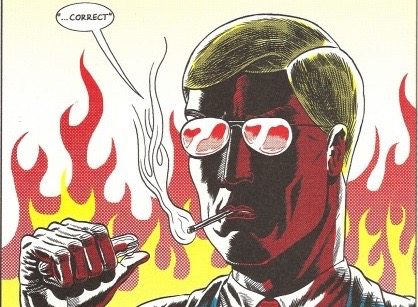 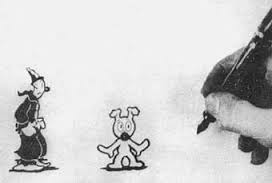