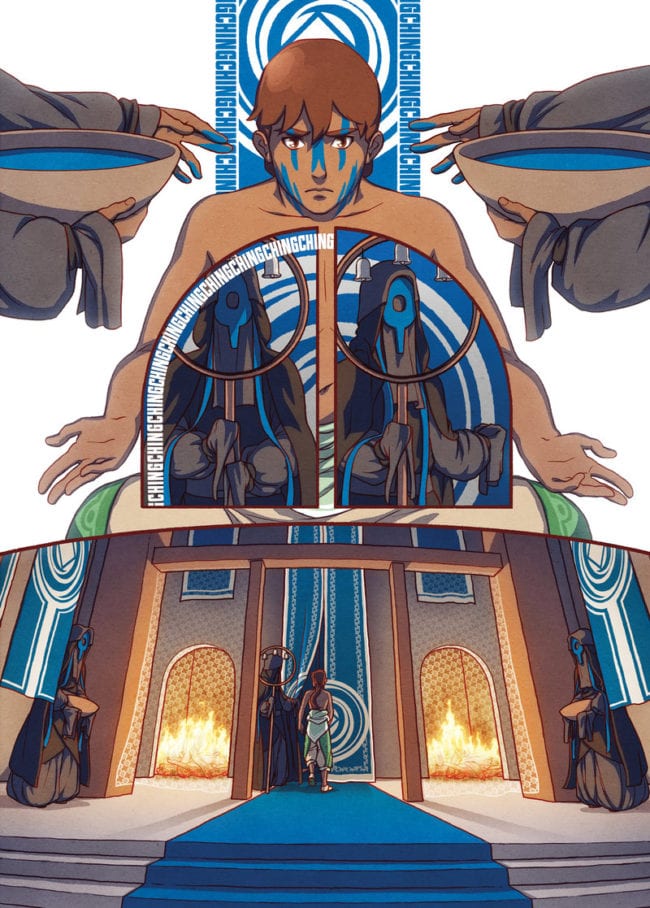 The Firelight Isle: A fantasy coming-of-age story set in a pseudo-South Asian-ish culture that follows a pair of childhood friends undergoing their first adulthood rites. It feels like I've been checking in on this webcomic for over a decade but its only been around for a handful of years in existence. Sixteen chapters have been drawn but the story doesn’t seem to have progressed beyond an unaffecting first act. I'm all for taking your time with your work but that remoteness, especially online, can take a heavy toll, both on the reader and the comic itself with the energy waning into a dull fizzle despite Firelight just hitting its first larger narrative development recently. The idea of perfection in comics is often a creative red herring, something to distract you from getting to the truth of your story. If you don’t have truth or beauty, then what is there? I don’t inherently dislike all meticulously rendered art in comics but something about succinct, vivacious, definitive linework has always translated truth and beauty better in comics than micromanaged complexity, which usually falls short of the baroque, and ends up in some awkward in-between state.

The inflexible rendering technique and the adherence to a scrolling layout without making total use of its potential reminds me of the webcomics of the early 2010s, which were often just animated feature pitches, with backgrounds, foregrounds, and characters intersecting in an incoherent, cel-painted manner. There's a few redeeming qualities scattered throughout, like the use of sound effects to delineate panels and the carefully constructed look of the world, but its stylistically weak vocabulary and stuffily ornamented environment fall flat. I do enjoy the rituals the leads have been training to undergo and find the processes of both interesting, but the characters themselves haven't become compelling yet. The same grainy texture is overlaid across all of the background art, which drowns any depth that might have added life to the art, grading it into a listless unidimensional surface. Skill is at play but all in service to tidy, extraneous embellishments, effort that would be better channeled into pushing the depth of characters, strengthening the construction of figures and improving the scope of its coloring. 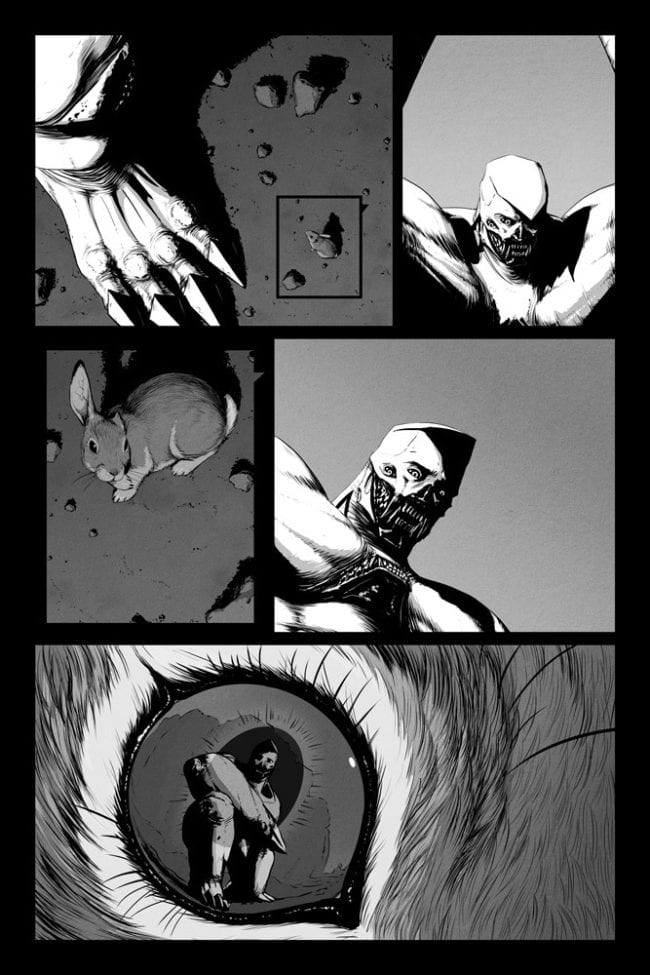 Aphelion: The first self-published issue by Gloria Reynolds, an aerospace engineer, about... a murder on Titan? Lethal AI in alien forms? Hive-minds and digital avatars? There's a lot of setup and hard SF buzzwords, as may be expected from an opening chapter, but not enough to give the lay of the land or enough insight into any particular SF element. Still, this grayscale comic is foreboding with its anxiety-ridden, chiaroscuro inking and hulking, mutated alien characters. Shadows are laid out austerely with textured and more thoroughly rendered aspects popping in and out of existence from panel to panel, somehow muddling the crispness of diegetic reality which ends up serving a good purpose as the nature of the environment is explored. The art, while fussier and overly elaborate in some areas, delivers on visceral horror with giant black membranous ribbons floating in the sky, characters with faces cut cleanly off and a slurry of teeth and guts embedded as tasteful background patterns. I’m hoping more of this comes out soon but, like, she's an engineer? Grace us with your work when you can, Gloria! 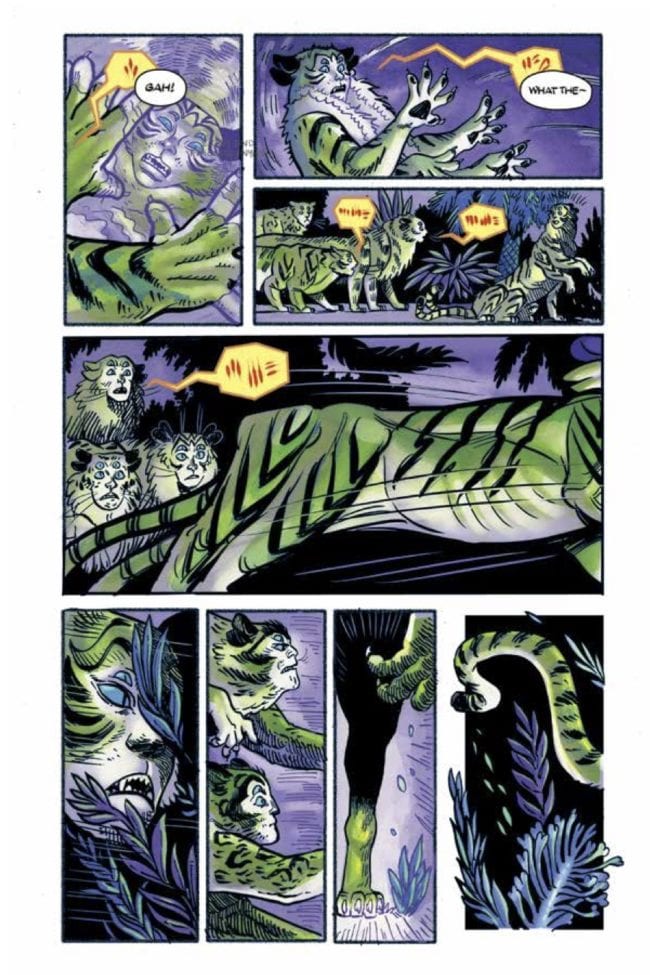 Afar: Afar, the first graphic novel written by Del Luca and drawn by Kit Seaton, is a YA debut story about a fifteen-year-old girl who suddenly develops the ability to project herself astrally into other beings on other planets while she sleeps. The concept is interesting but the characters' dialogue and plot are clichéd. The character design and the coloring is probably the best part, but the art is still too rigid, both in the inking style and in the body language of the characters, to be fully enjoyable to look at. As in many comics, most of it feels phoned in; tolerable, passable, but never in the service of anything narratively useful or impactful. It’s also not my favorite when white writers use the poorly made simulacrum of an existing culture in their fantasy worlds, manifesting here as a pseudo-middle Eastern/North African mix. There’s a heavy air of whiteness throughout the story, something in the entitled aloofness of the lead character and the narrative conceit itself which reflects a sort of "transracial" fantasy, with Boetema literally wearing another person's skin. Unfortunately that's not the worst this book has to offer.

The myriad ethical implications that come with possessing alien beings is never touched on — we never even learn where their consciousnesses go during possession. The lead character, Boetema, is careless of other people’s lives and bodies. We never see the possessed beings post-possession either, and so they appear as just puppets. The main person she possesses is never given a voice;d instead the lead character flirts with the possessed alien’s love interest... This is painted as fine somehow. A splash page at the end shows Boetema floating in space with the person she's been possessing smiling at each other. This is strange, because we didn’t ever get to know the person she possessed. Would she be that cheery about having her autonomy taken away without her consent? It doesn’t convey any sort of insight into these characters, either via inner narration or conversation, and I can’t even cobble together any sort of theme this story could be building off. Conflict comes up based on things never shown or inadequately conveyed. There’s also not much backstory on the astral projection ability, why Boetema has it and what its purpose is. The plot holes are gaping and the lack of any self-examination on Boetema’s part makes this comic a whimsical but sadly shallow attempt. 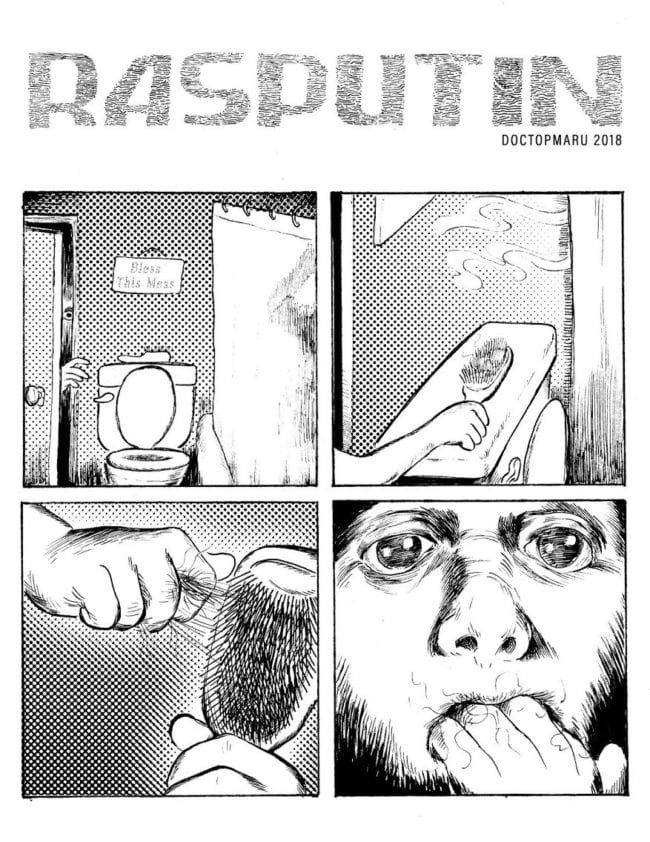 Rasputin: Garrett Young, with their textured inks carving out shadows in their characters' melding faces and amorphous bodies, has been an impenetrable presence and a staple of illustration and comics throughout my internet life. Rasputin, their new daily webcomic that you can follow on Instagram and Tumblr, is a delectable ongoing collection of unconnected one-page vignettes, ranging from comedic body horror gags to the surreal mundane. Rasputin is nonsensical, absurd, and delightfully dark. It always leaves me on edge, even when it’s just depicting a banal series of actions, because I know it doesn’t care about offering any sort of pattern, reason, or resolution. Because of this, every page of Rasputin is a pleasure to read. 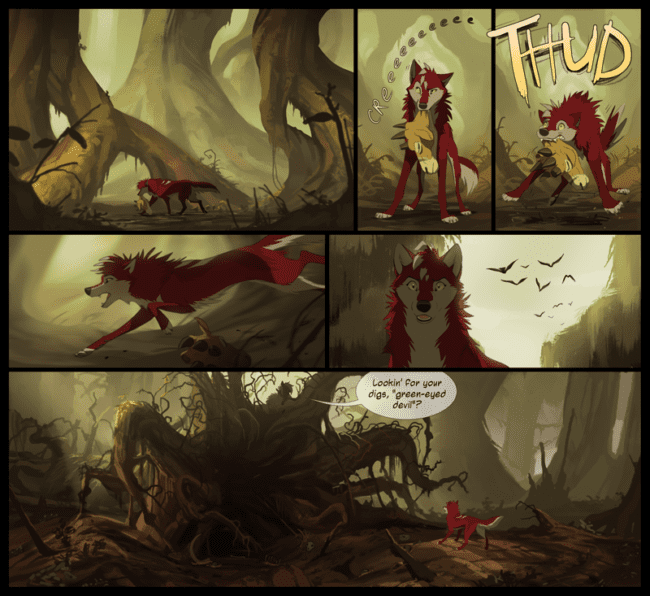 The Blackblood Alliance: Kay Fedwa began making this lush, talking-wolf adventure webcomic since 2005, and has come back over a decade later to reboot her passion project. Its second iteration doesn’t stray far from the original BBA comic, with a style that looks close to animation stills with detailed backgrounds and stark, minimally rendered figures. The reboot art is more cohesive with its lushly rendered environments (painted by artists Fable and Naviira) serving as a soft backdrop for the subtly shaded wolves that function as the main cast. Notably complex wolf fights are interspersed throughout the comic, choreographed and storyboarded by Zachary Braun of Nature of Nature’s Art fame. It’s been exciting to see this cartoonists passion reignited for this project and that her obsession with drawing perfectly sleek, colorful wolves has stayed strong over the years. Classic BBA didn’t make it past the second chapter, and so the story has been in a perpetual first act for a long time. I’m hoping with this reboot Kay can push on with the story she’s determined to tell. 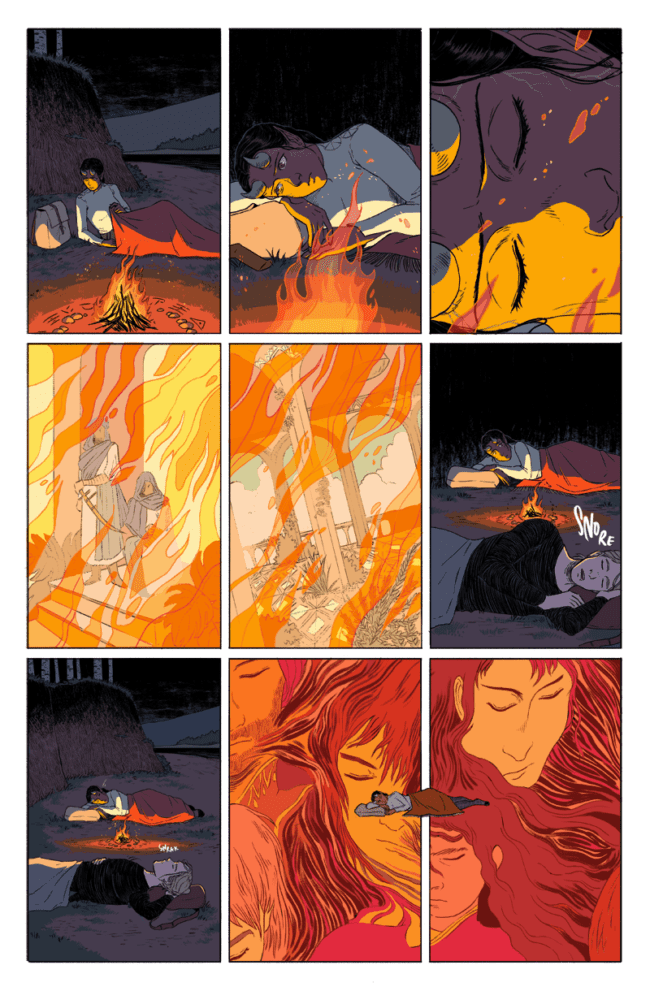 Verse: Sam Beck has a deep love for fantasy and it shows in the careful, insightful attention towards her characters and the worlds they live in. Verse is a fantasy story that follows two characters, Fife and Neitya, who find each other through strange, magical circumstances. Inscrutable sorcery and war looms behind these characters as they travel to discover their purpose, running across friend and enemy alike. Sam’s strength is in her sense of composition which adds drama to more modestly staged scenes and pacing, giving environments attentive detail to set the scene. Her manner of coloring is also streamlined and flat but maintains an attractive depth with stern palette control alone. Sam has a unique voice in comics and definitely one worth keeping a close eye on. 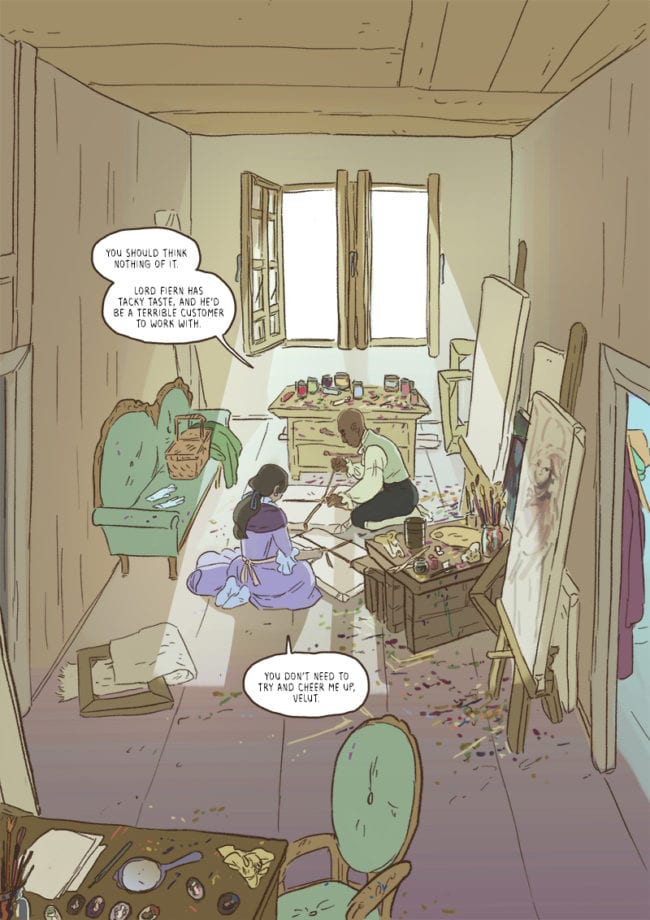 Kids These Days: A newly launched webcomic that follows three 20-year-old artists in search of purpose and career calling amid social upheaval. Noora Heikkilä is a comic artist I’ve been following online for a long time. I was especially intrigued by her now defunct webcomic Judecca, a grim but tense slice-of-afterlife story that follows a shark-like man and a mute girl. So far, Kids These Days seems to be a more down-to-earth counterpart, exploring themes of sexism and classism in the art world and in the overall socially stratified culture. Noora has a charming digital style and uses a loose, unweighted hand when it comes to linework, but she really shines with her characters' expressiveness. The wrinkles in the characters face are subtle and don’t add age but instead a sort of volume of flesh, in their eyes, laugh lines and lips, that gives them a weighty physicality that conveys the subtlest of emotions. Noora has an unobtrusive sense of storytelling, but still manages to maintain a sense of whimsy and levity without giving up the weight of conflict that hangs over her characters. I’m looking forward to more of Noora’s work, both online and with her publisher Iron Circus Comics. 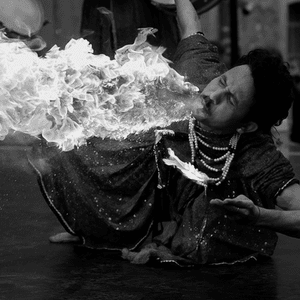 Carved out, in the giant landscape of broken rocks