It rained all day here. Cats and dogs had union meetings about it.

I woke up at around 1 in the afternoon and got a message about a badge for the Stumptown con that I needed to deliver. I did this one quick, I don't know if it'll be the final thing I have until Friday to decide to keep it or try something new. I was thinking of adding some turtles and mountains in the background if I keep this one. 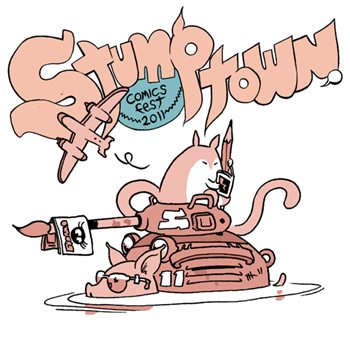 -------
Me and Marian went out to coffee down stairs. She did layouts for a DC job she's doing while I fucked around in my sketchbook and tried to write the next Multiple Warheads scene. This was the first time I'd had coffee in days and days and it got me all wired. Zzap! 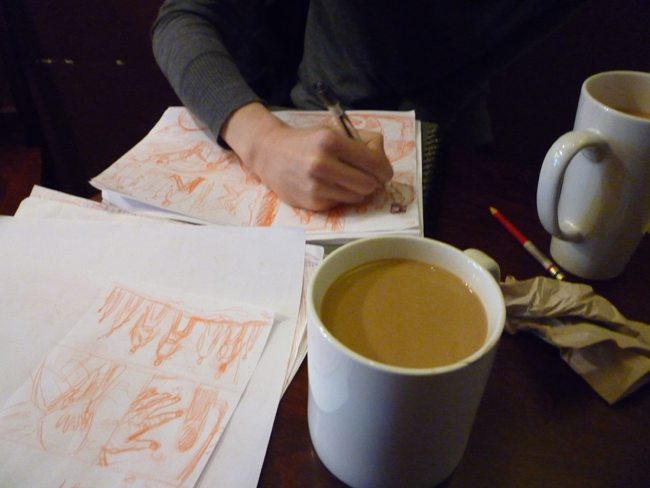 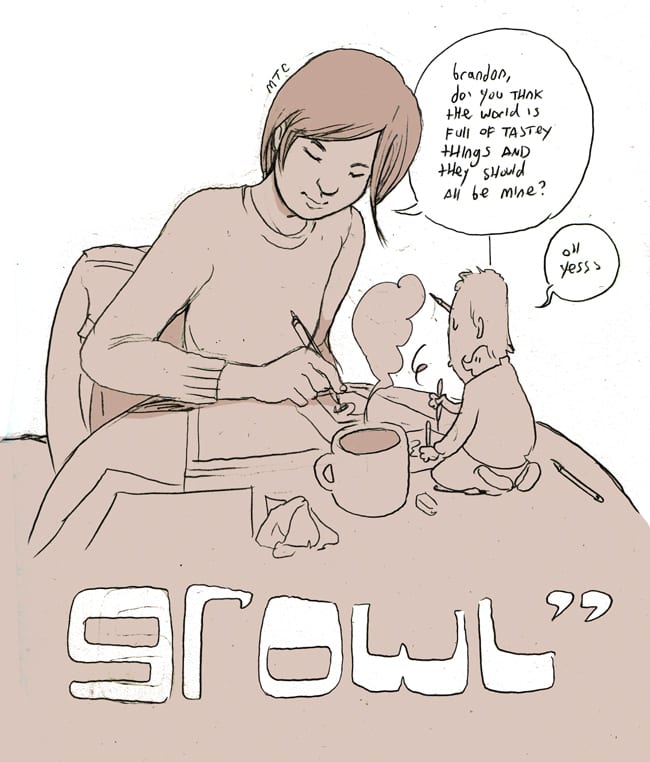 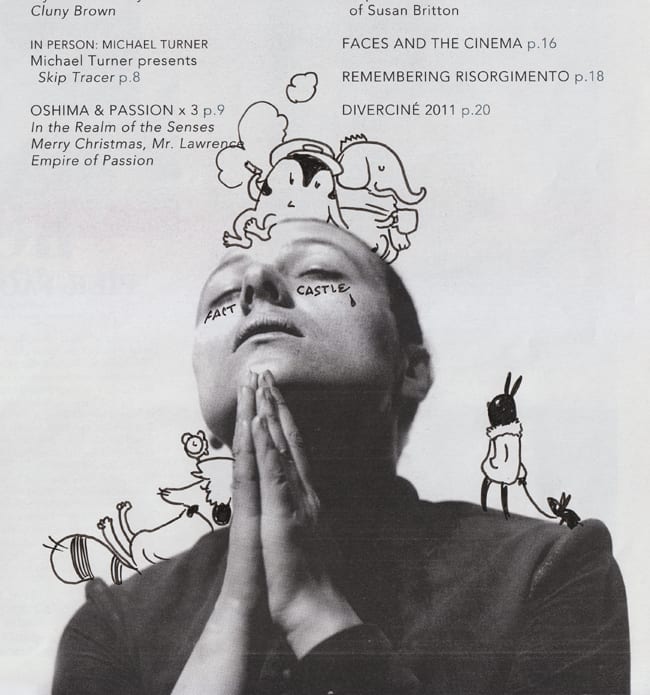 I drew myself in a waffle cone (top right) and then Marian did a bunch of these walrus-in-a-cones. I like a cherry hat. 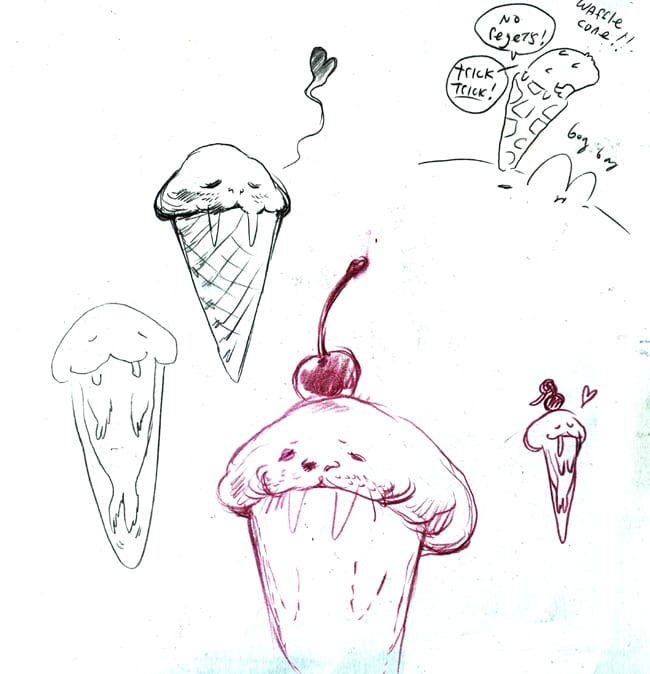 We were facing this poster. "Hey Marian, if you turned that 90 degrees, it'd look like everything in my sketchbook." There's something I really like about when silhouettes work. 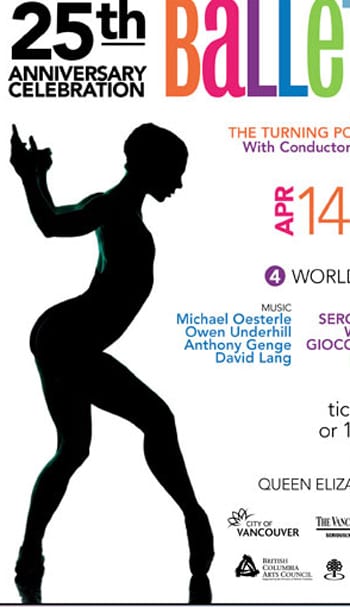 It reminds me of Thierry Le Gouès Soul photos:

Afterward I walked over to see my pals James (Stokoe) and Marley (Zarcone) (muggles).

Here's some stuff I saw on the walk over. 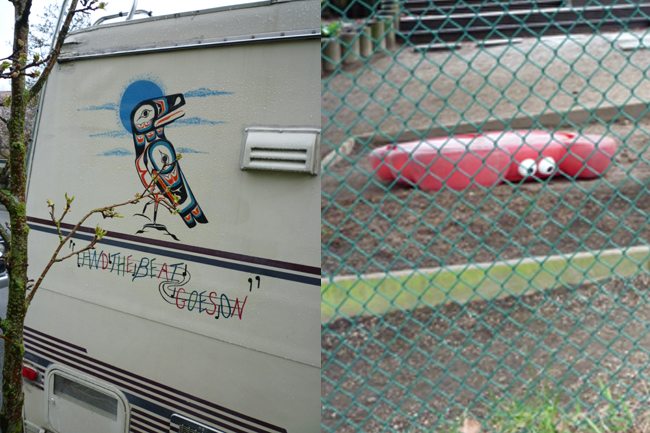 This is James and his lady and keeper Muggles' place. It's tiny and I hang out here a lot. Possibly the best place on earth to watch movies about cyborgs 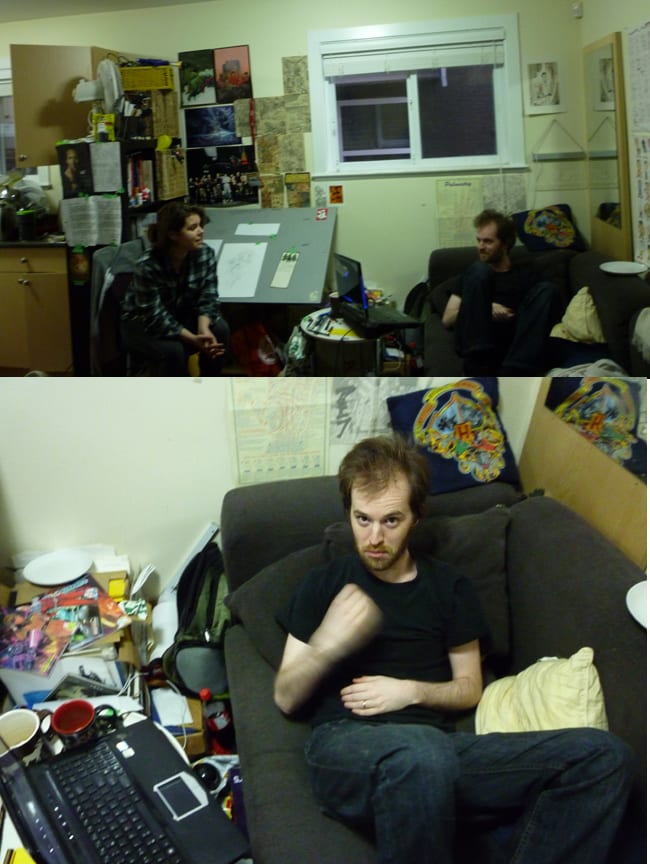 James has been threatening to kill me for the last Care Bear themed post I put up on my site.  I told him there was no reason for me to fight it--I'm like the cyclops in Krull that can see its own death. James WILL kill me over Care Bears.

He gave me his new issue. I asked him to draw another penis on it. Orc Stain has a lot of penises and my hope is that just one will be enough to break a dong shaped hole in the universe... the sound effect for that would be WANG! 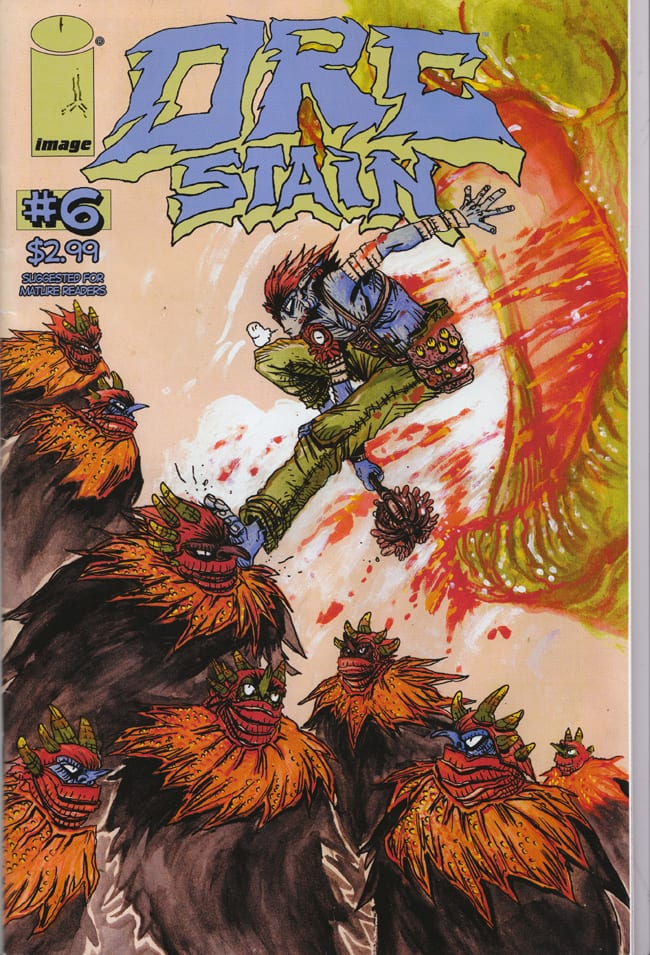 Today James is drawing another comic just for himself. It's a Spider-Man set in Vietnam called SPIDER-NAM. (It's man backwards you see.) I love that he does this shit with no plans on even telling Marvel about it. James is wicked comic book gutter dawg. 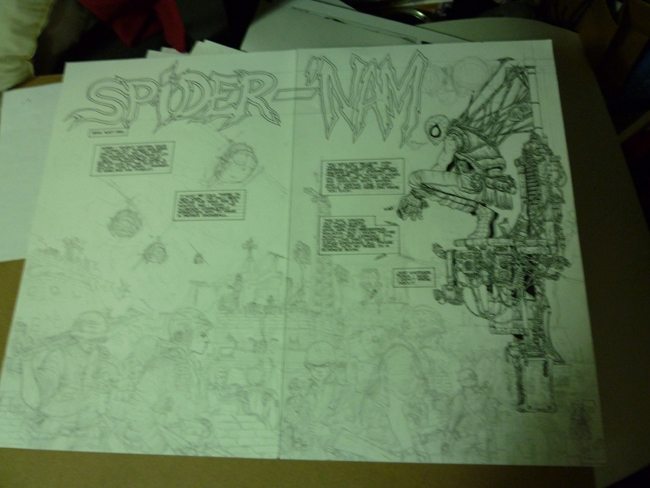 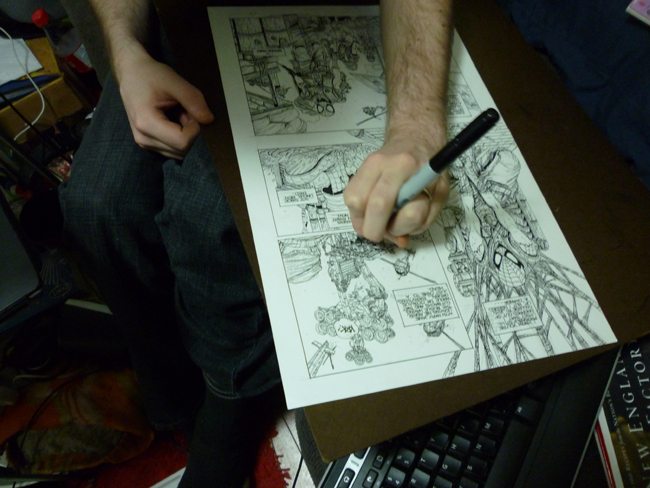 Marley is working on an issue of Elephantmen that my dear sweet Marian wrote. 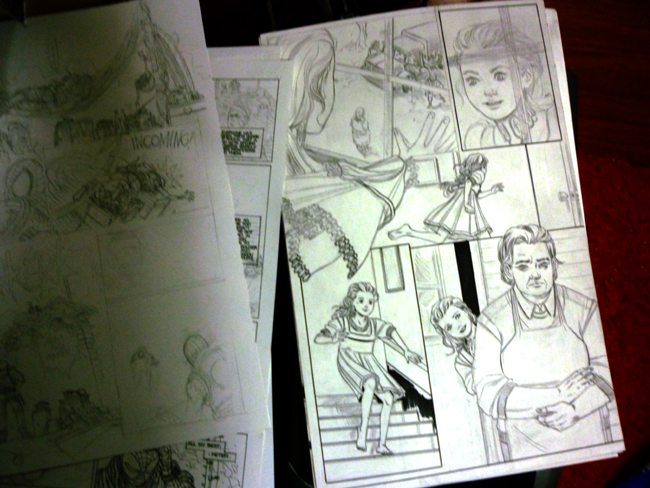 And here's a Phoenix drawing that she's working on.

There's this Nicolas Cage watch ad on their wall -- and it has a detachable mustache. 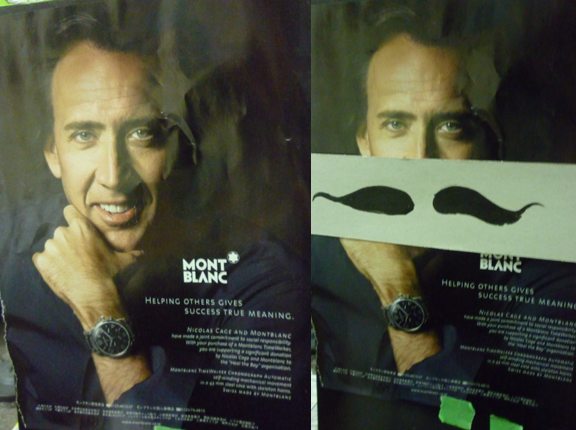 On James's desk he's started a list of war crimes after watching all of Buffy and Angel. 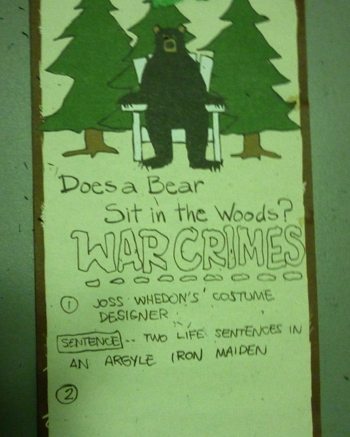 This is James's site:

Next me and Marley, leaving James to be a Hermit, went to meet Mr Inkstuds (Robin), homedawg Claire (Gibson), and Kate (Craig), and her missus Emily (Carrol) at a bar called the Cascade that the last time I was at the waiter told me he did voice acting in Dragon Ball.

Here's Emily and Kate and the bastard at the next table. 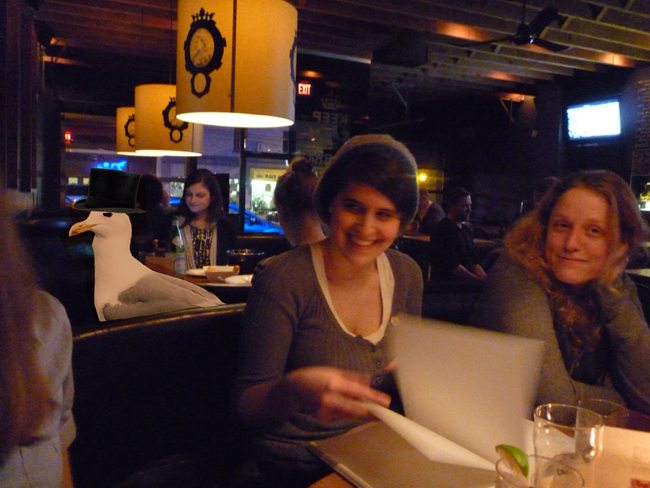 Robin and Claire were getting along well. 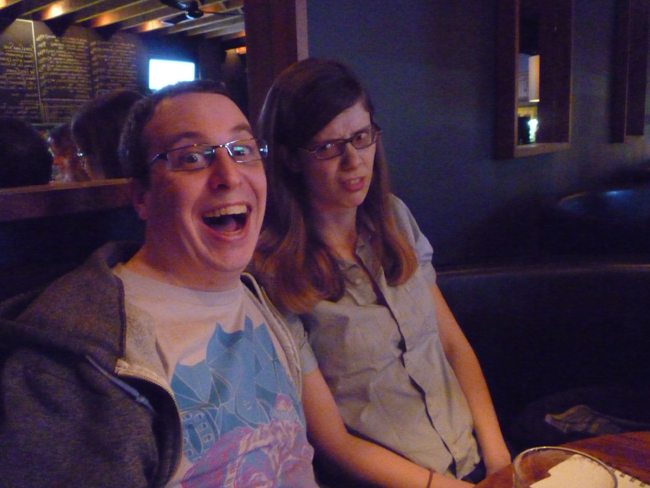 And me and Muggles again. This is the face she gets when we argue about mainstream comics. 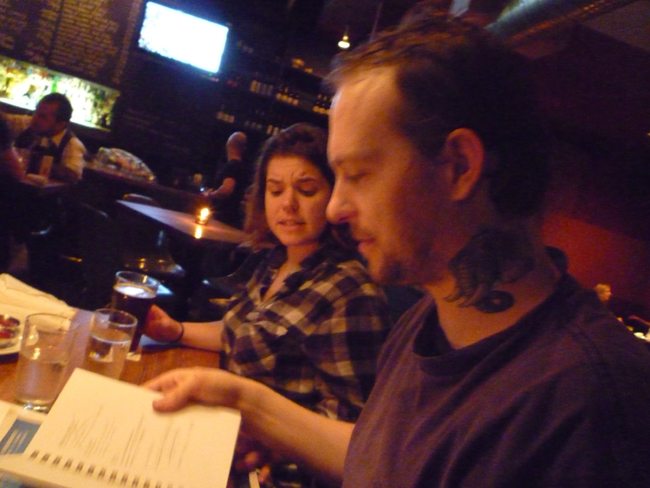 Emily's sketchbook is so fucking cool. 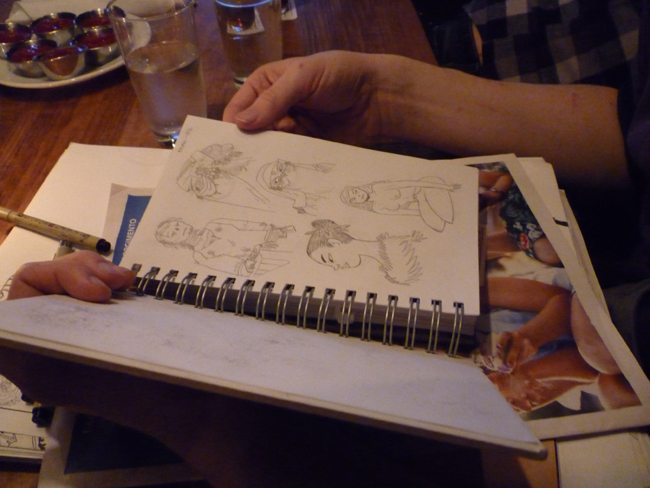 I drew a fawn based off of one of Emily's drawings and tried to ape her style. 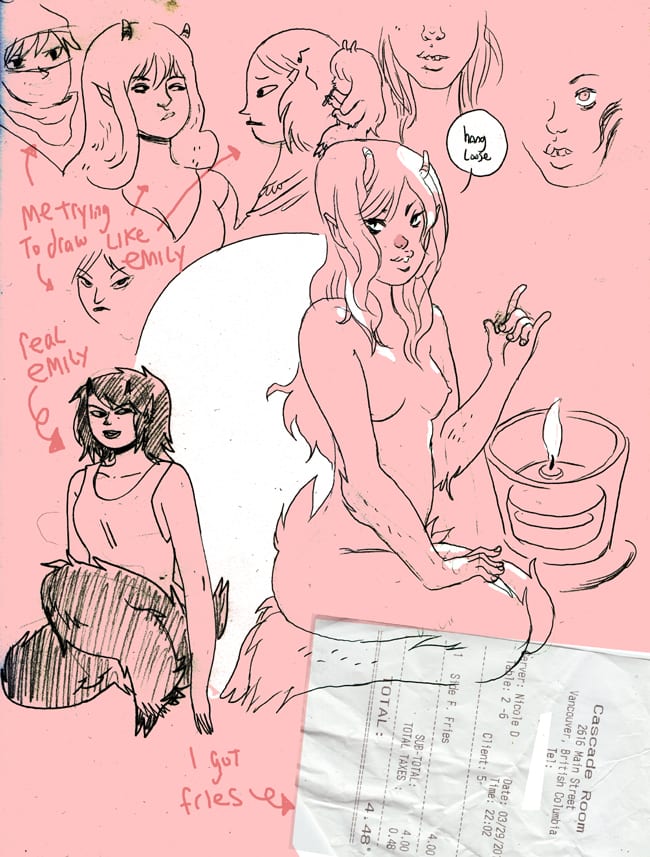 It was a long night of drinking and comic book talks. (I stayed sober so I could write this.) I made Emily and Kate come over to my place and borrow comics (the blue notebook -- and Robin loaned them a Gipi book).

One of the big parts of comics for me is the community of it. I don't mean the dumb industry but making your own community of solid exciting like minded people. You gotta have a dope crew. I am fueled by being around artists whose work excites me.

Now it's 3:30 and I'm off to eat macaroni and try to pencil the next Multiple Warheads page. 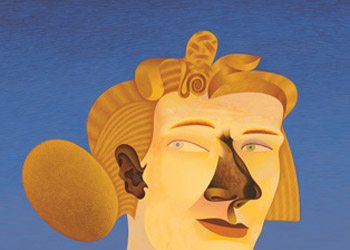