Today, for any of you tired of the Lee/Kirby debate that continues to rage, Rob Kirby (no relation, I assume) tells us all about the Latvian comics anthology, š! #14. Here's a sample of his presentation:

The theme for this latest issue is sports, which at first seems surprisingly conventional, coming from an anthology with past themes such as “Female Secrets” and “Midnight Sun.” Happily, the comics inside are anything but ordinary. Many of the š! creators seem to delight in presenting warped or heightened realities that veer from lighthearted whimsy to dark and downbeat.

I’ve slowly become familiar with the work of many of the contributing artists, some of whom have become favorites. It’s a treat to see König Lü. Q. and Lai Tat Tat Wing included here (I believe the former is in every edition), two artists who couldn’t be more dissimilar in style and content. Lü. Q. traffics in silly or non sequitur one-page strips with simple, childlike drawings, a type of comics I’ve always found irresistible. His “Real Quidditch” strip is a deadpan take on the Harry Potter series sans the “magic.” Meanwhile, “Taken” by Lai Tat Tat Wing, features another of the artist’s delightfully trippy identity-swapping, reality-changing narratives, drawn with a playful rather than stuffy formalism. His work would have fit neatly in RAW back in the day, no problem.

—Interviews. Jeet Heer appears on Inkstuds to discuss his monograph on Françoise Mouly. The Guardian interviews Joe Sacco about his new WWI book, The Great War. (They have a preview of the book, too.) And Michael Cavna at the Washington Post asks Jeff Smith about his new place on the CBLDF board.

—History & Profiles. BK Munn writes an obituary for the Canadian editorial cartoonist Roy Peterson. Mike Lynch has a few links regarding a new book on Archie cartoonist Bob Montana. Daily Ink has a short post on Mandrake artist Phil Davis. And I don't know why, but I'm getting major deja vu vibes off this Slate article on the history of swearing in comic strips.

—Other Stuff. Tom Spurgeon reviews the new Bill Everett collection. It is fun to read an article in mainstream media going on and on about how well comic books handle ethnic and sexual diversity compared to movies. If true, this is kinda hilarious, too, though in a different way. Finally, Rob Kirby, today's reviewer, is trying to fund a new LGBT-themed anthology via Kickstarter. 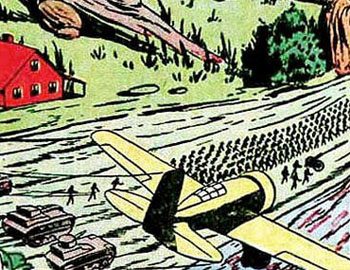 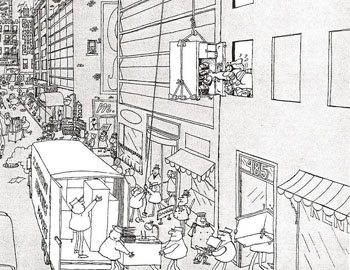 Sergio Aragones and the Art of Pantomime Cartooning