Thanks to everyone who sends me links to their comics, however unwisely. Every day, I inch closer to a Grand Unified Theory of Webcomics. 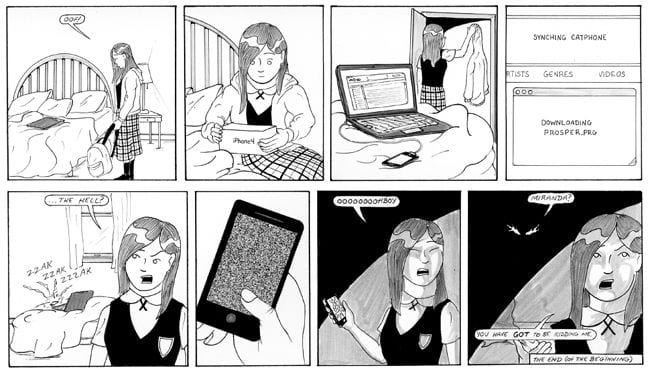 Catherine “Cat” Prentis is a budding magician with powers she can’t yet entirely control. She takes paranormal orders from the cardinal at her Catholic school, who sends her off to fight demons in South America and then leaves her struggling to explain to her classmates why she’s been absent. On a school field trip, Cat and her misfit drama-club friends run up against a pair of evil entities connected to a recently discovered Shakespeare manuscript. Ultimately, their school production of The Tempest gets mixed up with real-life witches, demons, and ghostly flashbacks to William Shakespeare hanging out at a pub.

The characters in Cat Prentis communicate in sassy Buffy the Vampire Slayer-style dialogue, and the comic shows a big Buffy influence in general, from the premise of a super-powered teenage girl fighting demons to the bad guys’ habit of posing as human and then suddenly revealing evil crinkle-faces. Between that and the Shakespeare material, suggestive of Neil Gaiman’s take in Sandman, I can guess that the creators were teenagers at just about exactly the same time I was. Cat Prentis updates things with plot twists involving possessed classroom computers and iPhones, but this is still a very ’90s monster-fighting comic. And there ain’t nothing wrong with that.

The comic’s weakest point is its art, which, as of the recently completed first story arc, has only improved by small fits and starts. It’s still in the midst of growing pains, with lopsided backgrounds, flat-looking human figures, and stick-limbed, grinning demons off the back of a high-schooler’s notebook cover. The art is especially inadequate in the action scenes, where the creators set themselves drawing challenges they’re not quite up to. But I like the sarcastic Catholic girl protagonist and the drama-club kids, and hopefully both the art and writing will deepen in Volume 2. 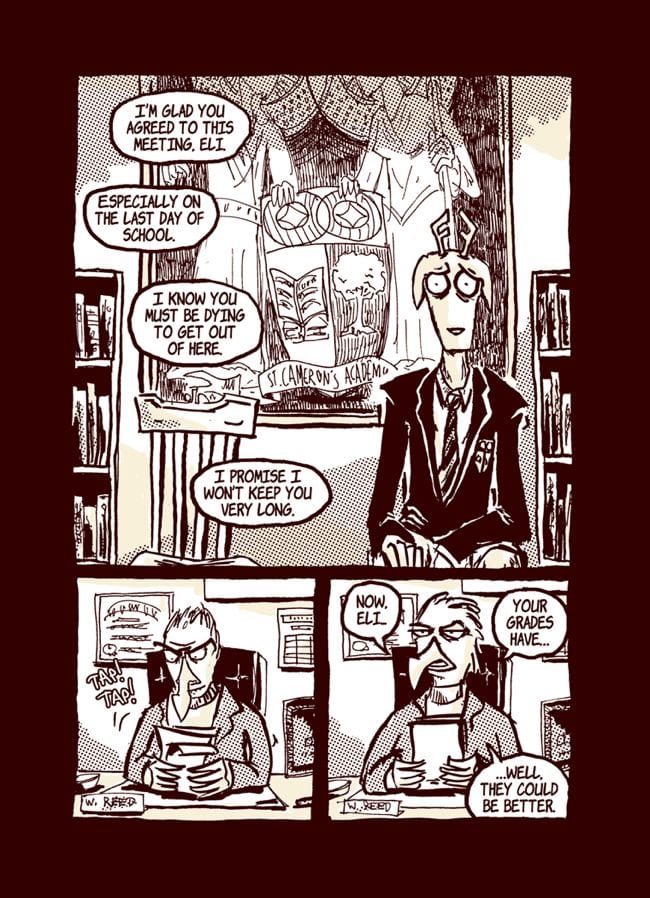 In a world of anthropomorphic animals which, thankfully, bears no resemblance to the usual furry art, Eli the teenage deer hangs out with the delinquents at his private school and tries to keep the peace with his scholarly minister dad. Eli’s world looks pretty much like ours, only with animal-headed people. But gradually, as Eli and his friends slouch around town, we catch on to the little differences—particularly the dominant religion, Dualism, which involves the worship of a pair of co-creator gods.

For a long opening chapter, Epiphany follows the characters with no particular urgency, capturing the perspective of the age when scoring cigarettes, getting into the cool kids’ parties, and figuring out how to break up with a boyfriend are matters of life and death. Then an unexpected tragedy strikes at the same time Eli discovers a heretical Dualist text, and things kick into overdrive. Before long Eli is trying to restore a deadbeat, chain-smoking lion-god to power, and by the end of this graphic novella a lot of serious metaphysical crap has gone down.

Ian Jay is a Savannah College of Art and Design graduate, and this is a fantastic-looking comic. Sepia-toned with occasional color pages, it’s drawn in thick, bold lines with animated figures. Jay especially excels at expressions and body language, making his characters burst with personality and humor. The dialogue is equally human and well-observed. The only trouble with the story as a whole is its uneven pacing: the slow-paced, casual buildup of the early pages gives way to a rushed climax without enough conflict or explanation of what’s going on. Still, lots of good stuff here. Epiphany just ended in early June, so go read it, and keep an eye out for Jay in the future. 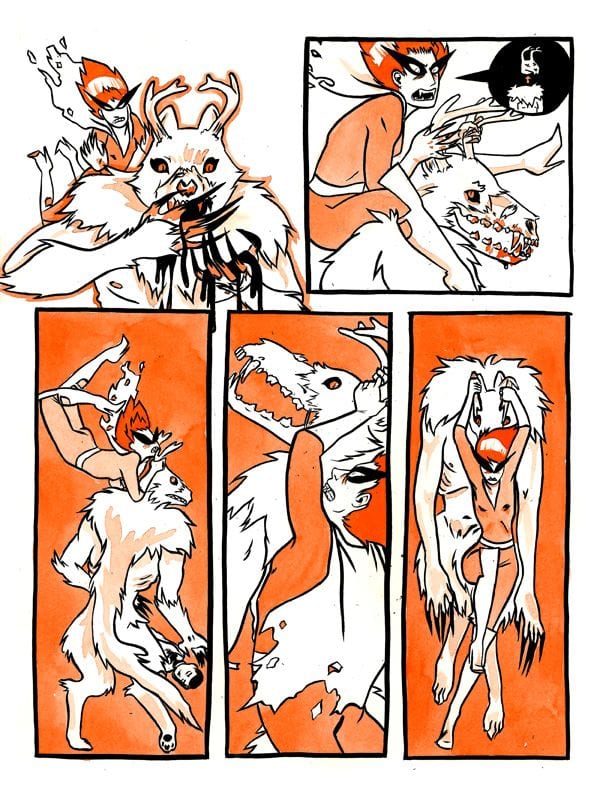 Teenage Billy lives in a trailer park with her strung-out single mom. By day, she deals with high school drama, family weddings, and asshole boyfriends. But at night she has vivid dreams about being a superhero battling weird monsters. Then she learns that her dreams are real; somehow, she’s started turning into a mute but powerful superhero every time she goes to sleep. Things get stranger and stranger as Billy’s waking life and dreams start to merge. Could the superhero stuff be connected to Billy’s absent father? What does the Slenderman-looking entity called The Grinning Man know? And what’s the best way to break the news about all this to Billy’s gay best friend?  “How do I tell him I’m a superhero when I sleep?” she frets.

Reminiscent of Omega the Unknown, Moonlighting starts with the superhero hook but quickly veers off into trippy fantasy, psychological allegory, and mythology (very few superheroes have fought kelpies). Wernet’s art starts flat and shaky but she gets more confident as she goes, eventually developing a clean, direct style. The monsters are interesting to look at and the fight scenes effective. Most of the comic is rendered in spot color—blue for day, red for night, with the two colors starting to mix as Billy’s worlds collide—which complements the art nicely and looks better than the over-rendered occasional full-color pages. Launched in 2010, Moonlighting updates very sporadically—the most recent page went up six months ago—so most of the mysteries of Billy’s adventures remain unveiled so far. 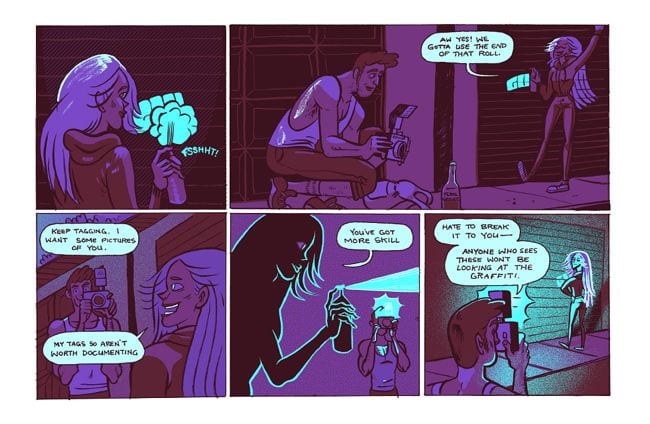 I am in sloppy love with this comic. “A web comic about food and making out,” Meat and Bone centers on Anne, a twenty-something just moving into her first apartment in the city. Anne manages a vegetarian restaurant called Spices, but her passion for food is tangled up in agonizing body issues. In one scene, she assures her friends that, yes, she’s totally satisfied just eating a bowl of yogurt for lunch as she sits surrounded by her restaurant’s delicious food, while trying to convince herself that it’s normal because at least she’s eating.

Anne is intimidated by her beautiful, brilliant roommate Gwen, fascinated by the mysterious sexy neighbor lady she sees smoking on the fire escape, obsessed with Jane Fonda, and haunted by Barbarella-themed sex fantasies. In other words, she’s a neurotic mess, but an appealingly individual one. When her inner struggles start to get suffocating, the comic expands out to the lives of the other characters, most recently following Gwen and her boyfriend Priam on a night of tagging.

These slices of life are spiced up by Meat and Bone’s funky artwork. Verhoerven’s art is detailed and expressive with a vaguely ’90s-alternative aesthetic, a bit like Debbie Dreschler but more rounded and dimensional. She draws observant, imaginative street scenes and a thoroughly convincing hipster vegetarian restaurant. The unobtrusive earth-toned palette keeps it all grounded. Also: amazeballs cat drawings. Meat and Bone is now a year old and has been updating, more or less reliably, once a week. Bookmark it. 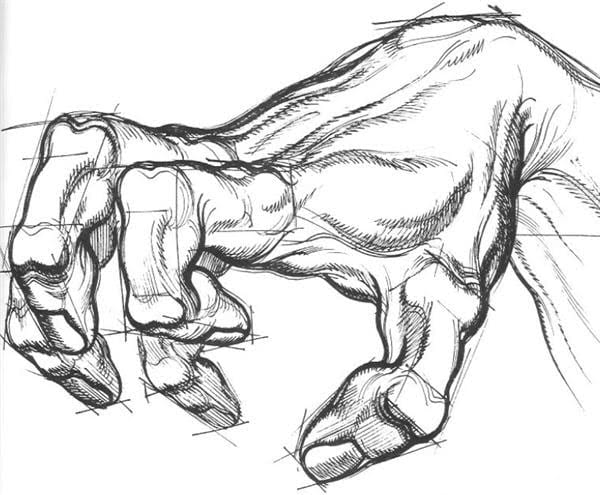 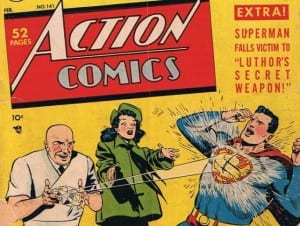