Nice to see all of you.

So, on the site today:

As allegorical fantasies, Kirby’s galactic operas were as interested in 1970s America as in imaginary goings-on in deep space. Yet Kirby’s greatest theme was even closer to home: his own power, his imagination, and his process of creation.

* And in that spirit, we present the complete text of Gary Groth's 1989 interview with Jack Kirby. This was quite controversial at the time of its publication, with many complaining that Gary had let Kirby talk too much, and make overreaching claims. But to my mind, it's a fascinating record of the artist in twilight, weary of his battles and fed up with getting so little credit. If he overreached in places, one can hardly blame him. In any case, here it is, and it's worth reading in light of this summer's movies.

I themed the collection around a set of eight Asian archetypes — the ones that remain most iconic and resonant with perceptions of Asian Americans even today... The archetypes are obviously negative ones, given the timespan of the archive. But their repeated appearances in the comics ends up being an amazing launchpad from which to explore the historical pressures and precedents that led to their inception.

Jeffrey Catherine Jones' passing has been noted several places. The best piece I've seen is Tom Spurgeon's, in which he examines the larger context for Jones' life and work. Here's Tom on the "Studio" period:

The legacy of that much talent doing what was collectively very good work at a point of almost monolithic and degrading corporate influence over the kind of art they wanted to do has provided The Studio with a legacy that can be embraced even by those that didn't particularly care for the artists' output.

And David Apatoff takes a close look at a single painting. 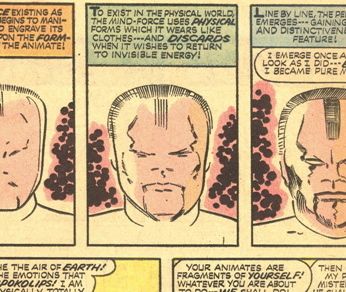 Bedlam and Baby: Parables of Creation in Jack Kirby and Chris Ware 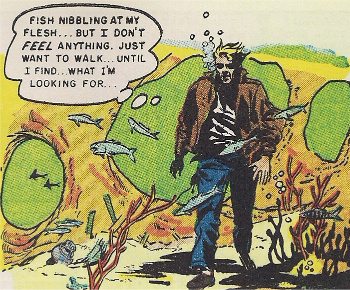