Jean-Claude Claeys published his first comics story in 1975, in the pages of the French magazine Emmanuelle. His first collected comics album, Whisky's Dreams, was released by Éditions du Cygne in 1977. He produced eight albums in total, serialized, at times, in forums such as À Suivre and Métal Hurlant; the last arrived in 1989. From the stylized curvature of his beginnings, he became an unholy fusion of Drew Friedman and Jon J. Muth, chasing a dream of manifesting American silvery noir melodrama from an X-rated parallel world. He is the Alex Ross I'd always wanted to like.

His comics have not been in print since the 1990s. He presently works as an illustrator, among other pursuits. 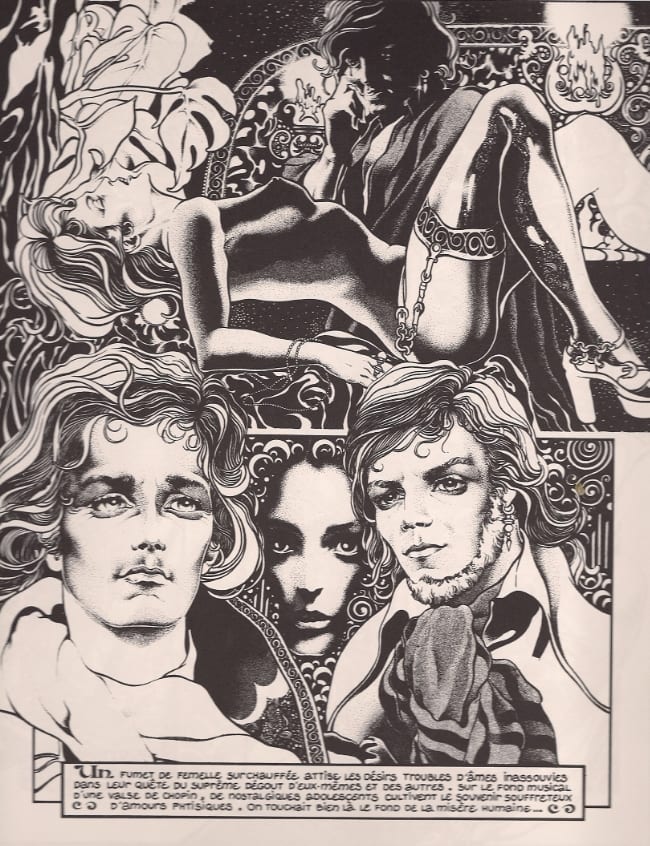 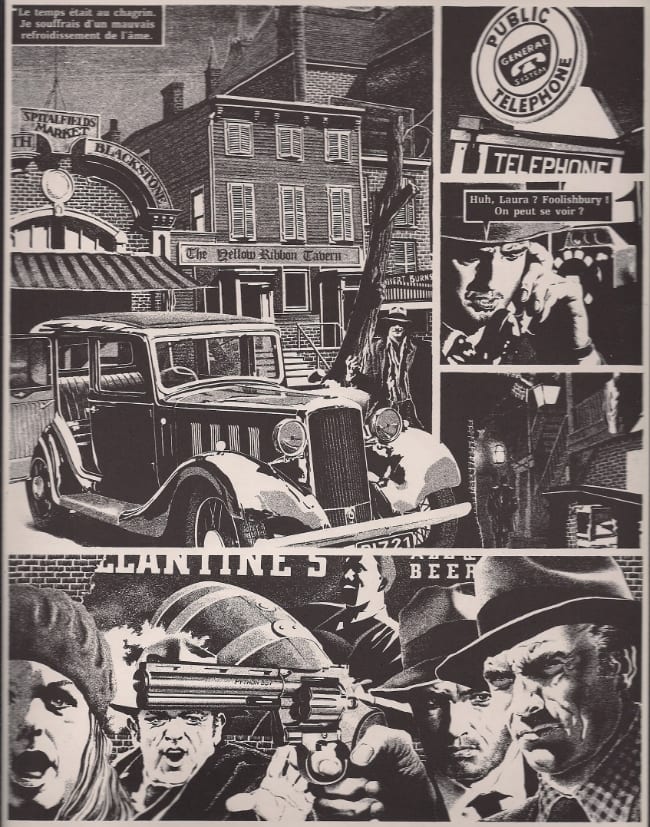 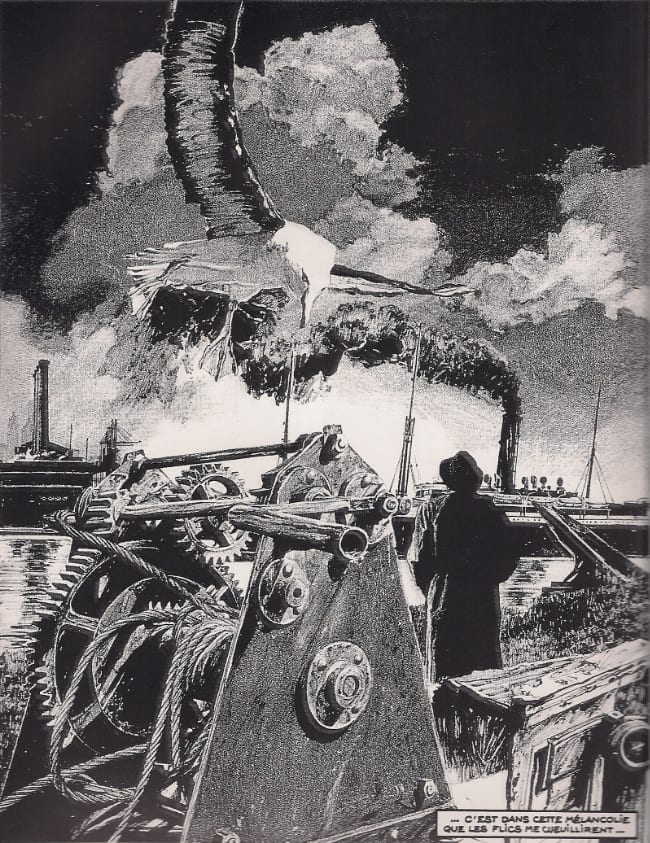 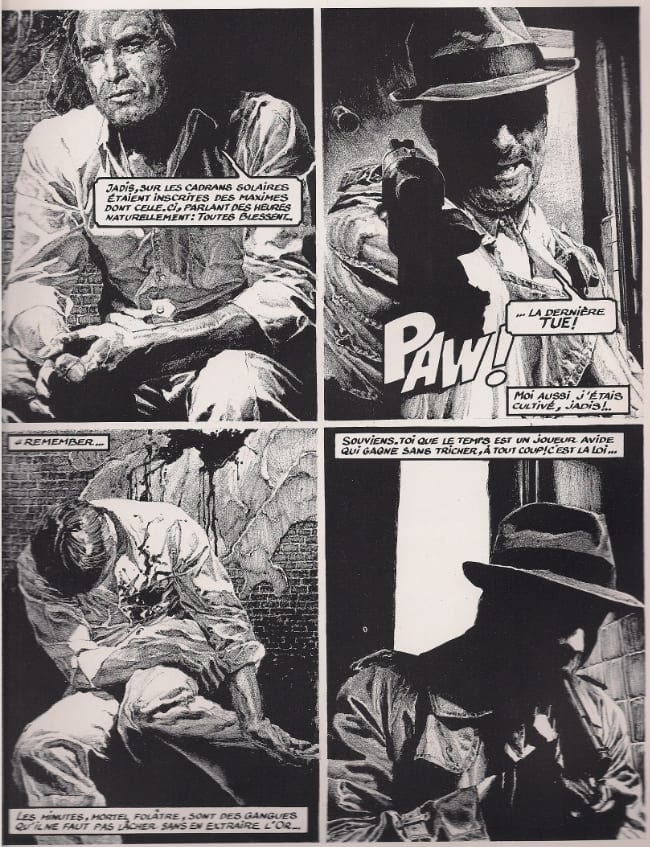 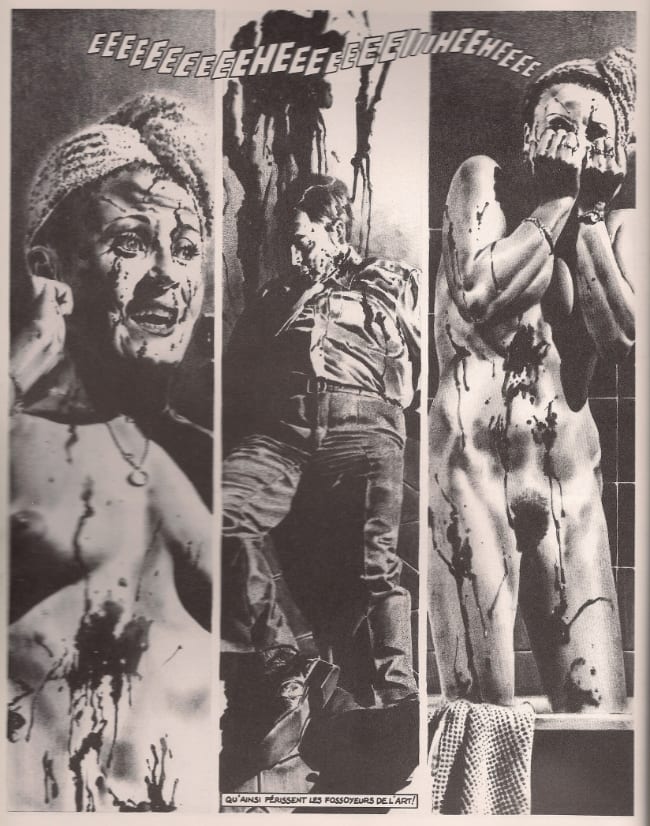 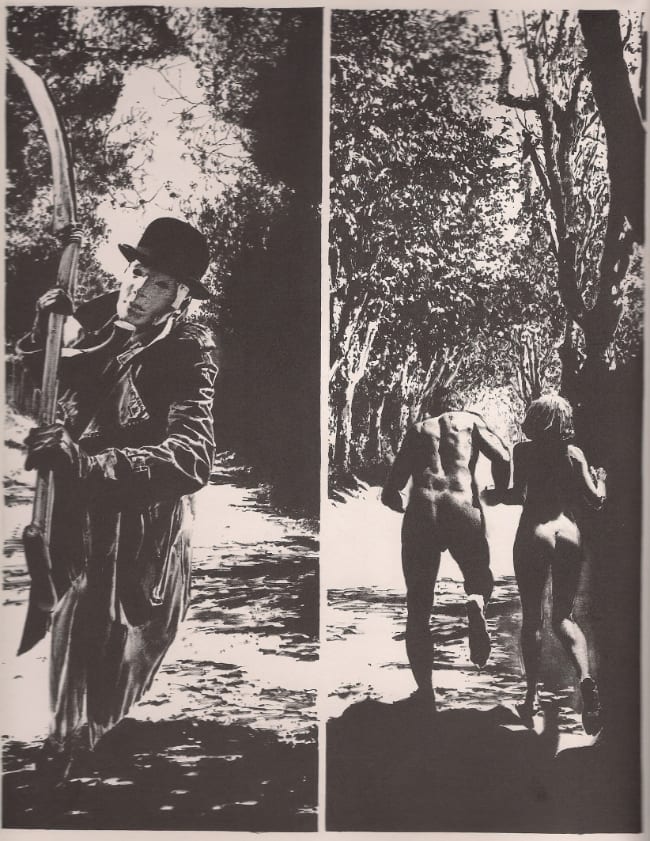 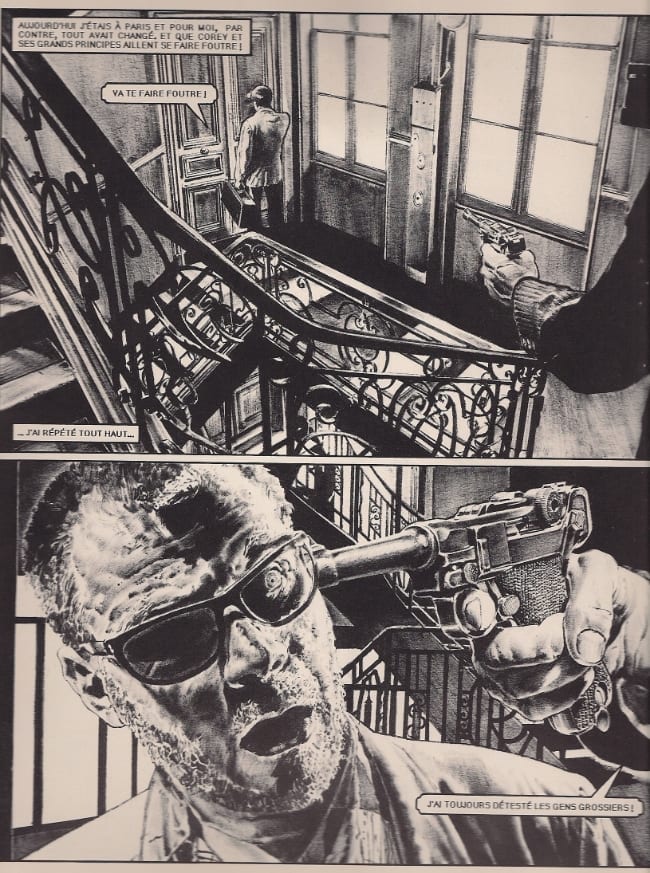 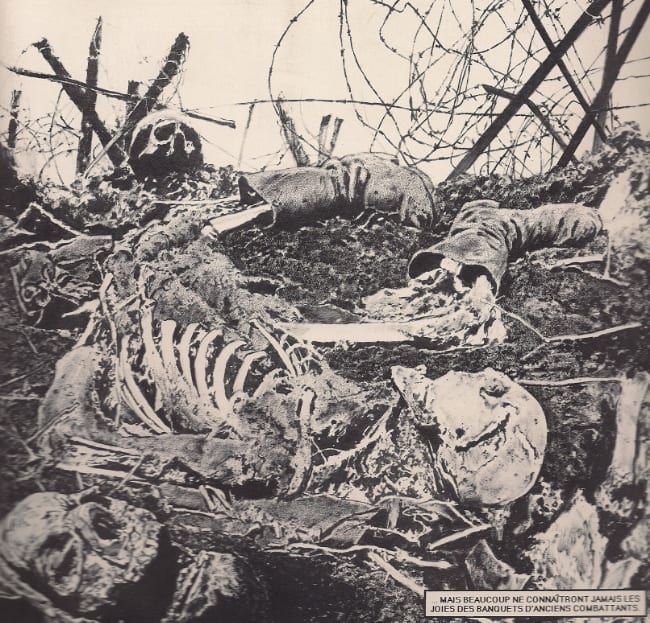 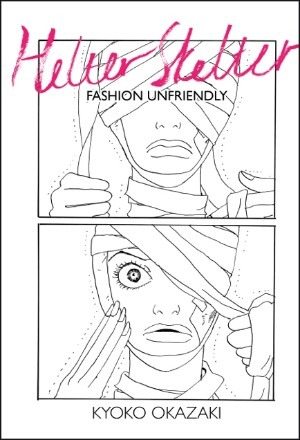 Helter Skelter: Fashion Unfriendly: Big, big week for manga readers of a certain stripe, as Vertical brings us the official North American publishing debut of Kyoko Okazaki, a major figure in the '80s/'90s boom for 'Mature Readers' manga aimed specifically at women. This, however, is a slightly later work, a multi-award-winning 2003 release about a top model who contends with professional rivalries, domestic despair and rampant cosmetic modification. Years ago Okazaki was something of a darling in the more progressively-minded corners of the unlicensed scanlation scene, so here's hoping as many souls will be moved to fork over authentic cash money for 320 print pages, since Vertical has already planned a second release by the author for later this year, 1989's office lady/prostitution saga Pink; $16.95. 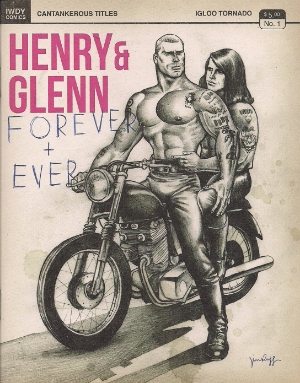 Henry & Glenn Forever & Ever #1: Anyone in need of a reminder as to the complications of publishing a 32-page alternative comic book today would do well to examine the cover(s) of this latest romantically-inclined humor project, which bear(s) the name of no less that three entities: editor/primary writer+artist Tom Neely's i will destroy you, the multi-cartoonist consortium Igloo Tornado, and Cantankerous Titles, an imprint of Microcosm Publishing. Then you can check the legal indicia, to learn that the book was actually released back in 2012, although Diamond only now appears to be releasing it to comic book stores. Nonetheless, the fact that it's even *carried* by Diamond in 2013 suggests a certain amount of popular support for Neely's recontextualization of politicized muscleman Henry Rollins and errant comics publisher Glenn Danzig into a gag-filled domestic comedy akin to something from Dell, albeit with popular music references and a lachrymose horror host. Backup strips by Ben Marra and Ed Luce, variant cover (pictured) by Jim Rugg, presently on issue #3 outside of the majority direct market system; $5.00.

(Incidentally, did you know Verotik is still around? They just released a new issue of Satanika a few months ago, filled to the brim with Danzig's characteristic blend of lugubrious fantasy novel poetics and energized descriptions of what is happening in the panels. A rushed-looking Simon Bisley participates, although it's longtime beefy nasty dude specialist Rafa Garrés who emerges as sufficiently demonic. For my money, though, the most interesting thing Verotik ever published was Verotika East, a two-issue 1997 manga porn anthology put together at around the same time Danzig was trying to get Japan's Madhouse Studios to animate a Satanika OVA movie, less than three promotional minutes of which were ever completed. (NSFW!) That said, no less a sex 'n violence legend than Wicked City/Ninja Scroll director Yoshiaki Kawajiri contributes some sketches to Verotika East #1, while a (BARELY-coherent) full story appears courtesy of Koichi Ohata, he of the (barely-coherent) armored soldier bonanza M.D. Geist. Something tells me the $11.95 cover price per issue may have contributed to the project's relative obscurity...)

Steve Ditko's Monsters Vol. 2: Konga: And then there is Ditko, and Charlton, and the fourth Craig Yoe/IDW compilation of said material, this time focusing on 328 color pages' worth of movie-derived giant ape exploits, composed all the way up to some small overlap with the debuts of Spider-Man and Doctor Strange at another publisher. Note that some of this material was reprinted in b&w by Robin Snyder and Ditko himself back in '89 under the title The Lonely One; $34.99.

Rocket Raccoon: Tales from Half-World: This is your inevitable compilation of Mike Mignola Rocket Raccoon stuff from 1985, because of course that was going to happen, there's a movie coming out and everybody loves staring at really early play-for-pay output by famed auteurs. Written by Bill Mantlo, inked by Al Gordon & Al Milgrom, and released as a bargain-priced comic book fatty, perhaps in recognition of the fact that this stuff was just reprinted two years ago (as Rocket Raccoon: Guardian of the Keystone Quadrant, with non-Mignola predecessor material); $7.99.

Itty Bitty Hellboy #1 (of 5): While I suspect the sentiment will be foreign to many readers of this column, for a while, from 2008 to 2012, DC's Tiny Titans was considered to be A Major Comic by certain factions of lapsed and devout superhero readers, insofar as it embodied a welcoming, humorous and unwaveringly kid-friendly approach to monthly cape publishing. Now artist/co-writer Art Baltazar and co-writer Franco Aureliani come to Dark Horse with a similarly-poised adjunct to Mike Mignola's Hellboy universe, doled out in short, parodic bites. Samples; $2.99.

Science: A Discovery in Comics: Eurocomics 4 the youth #1 - being NBM's second release of 8" x 8" educational funnies by Amsterdam-based writer/artist Margreet de Heer (following last year's translation of Philosophy: A Discovery in Comics), this time a 2012 original presenting a basic history of scientific disciplines across 192 color pages. Note that this is actually the author's third such release; a 2011 book on religion still awaits translation. Preview; $19.99.

Smurfs Vol. 16: The Aerosmurf: And #2 - more of those tiny Belgian devils from NBM/PaperCutz, now seeing the original series enter the 1990s, where I hope they will all develop bad attitudes. Wait, wasn't that the premise of the new movie? HOLY SHIT, The Smurfs 2 has made over $230 million dollars worldwide, which I don't even think is very good, since it cost north of $100 million to make (not including promotions)! God. Uh, in this comic, the Smurfs get an airplane; $5.99 ($10.99 in hardcover).

Heavy Metal #264: In contrast, these Eurocomics are probably not for kids... hell, they're not always Eurocomics. In fact, Batman Incorporated artist (and occasional writer) Chris Burnham has a new story in this issue, along with (hopefully) more of Enki Bilal's Animal´Z; $7.95.

Jack Kirby's OMAC: One Man Army Corps TPB: Meanwhile, I will presume you are ready for the world that's coming again, since DC is also releasing a new paperback edition of its compilation of Jack Kirby's 1974-75 series, following up an original omnibus hardcover from 2008, when we were all half a decade younger, ha ha; $19.99.

Visual Funk: The Art of Jim Mahfood: But getting back to IDW, this is the latest in their line of high-profile cartoonist art books which don't necessarily confine themselves to comic book art. As such, expect everything from sketches to murals to photographed body painting in this 9.5" x 12.5", 256-page hardcover dedicated to the reliably striking man of the title; $49.99.

Sam Kieth: Samplings and Dabblings - A Cartoon Art Museum Exhibition: Hey, didn't Kieth just get one of these last month? Yes, but don't confuse this IDW's The Worlds of Sam Kieth, as this is actually an 80-page catalog, released by the same publisher in conjunction with an exhibition held at the Cartoon Art Museum in San Francisco earlier this year. With an artist's interview, conducted by Andrew Farago; $19.99.

The Devil is in the Details: Examining Matt Murdock and Daredevil: And finally, your book-on-comics of the week is a new Sequart collection of scholarly musings on the Stan Lee/Bill Everett creation, edited by Ryan K. Lindsay; $15.99.

CONFLICT OF INTEREST RESERVOIR: Not a lot of especially interesting new comics from anyone this week, although the new-to-you flag might best be waved by The End of the Fucking World, a 176-page collection of lost & amoral teen romance thrill-power from Charles Forsman, who parlayed the work's monthly eight-page minicomic serialization into a genuine self-published word-of-mouth sensation among attuned readers, not all of them especially mini-cognizant; $19.99. And then, slowly, we drift away from comics with Nudnik Revealed!, a 12.25" x 9.25", 128-page examination of cartoonist & animator Gene Deitch's line of mid-'60s animated shorts, filled with production art and commentary by the creator; $29.99. Farewell, comics... until next time... 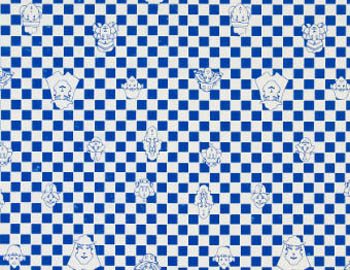 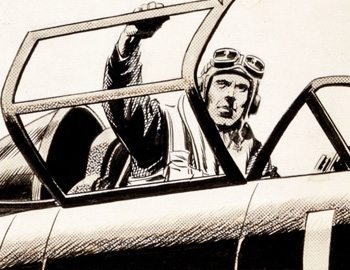