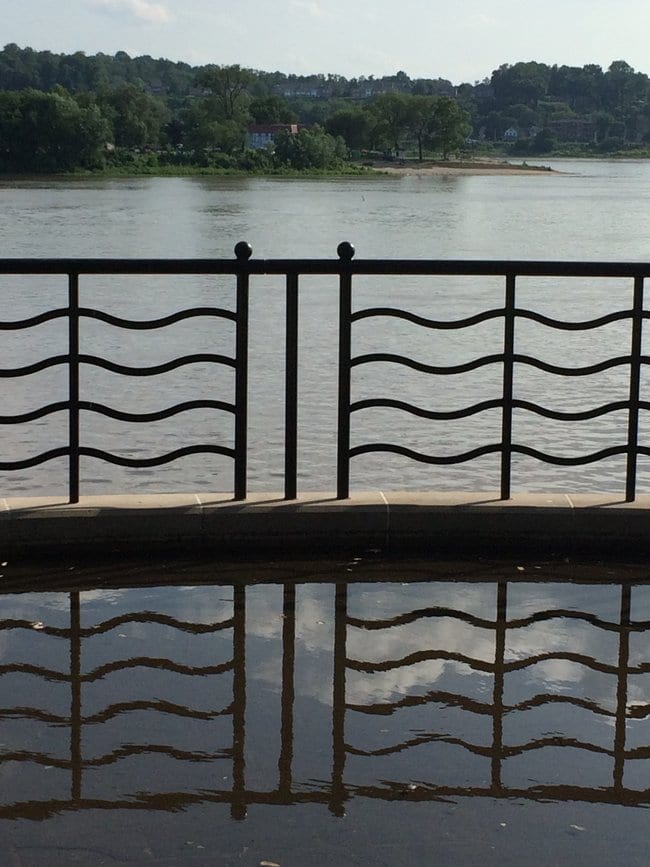 I'm out among the natural world this week - still in range of cellular service, granted, but definitely very dangerous and exciting, and not so conductive to writing a long introduction up here. Who knows, maybe you'll hear a lot more from me later this week, and not even on the national rundown of animal encounters... 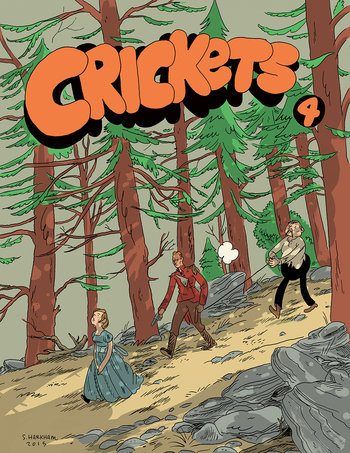 Crickets #4: Two eight-dollar titles up in the spotlight. You might have seen this one at your local shop last week, but I'm just seeing it listed now - it's the newest issue of a solo anthology series by Sammy Harkham, which since issue #3 has been mainly devoted to serializing his graphic novel Blood of the Virgin. However, both extant parts do a pretty good job of standing alone, being glimpses into the life of a determined fuckup working for an AIP-like low-budget movie studio in the early 1970s. This installment splits its time between extremely rigid, dense panel grids conveying the focused rhythm of work on a movie set -- problems small and large popping up to be knocked back in small vignettes, typically breaking off partway through a page, the unity of the project (and indeed, the unity of an edited film) asserted through the uniformity of the page layouts -- and looser panel arrangements catching the cast on off-hours, where personal issues bubble up into their own form of looming terror. Clearly the work of a connoisseur of the time period, not only in terms of technical detail (where there's something almost Soderberghian in Harkham's fascination with people performing work), but in allowing even the off-camera drama to drip with peculiar sensation, as if we might squint and see these artists as covert documentarians. It's 8.5" x 11", 52 pages; $8.00. 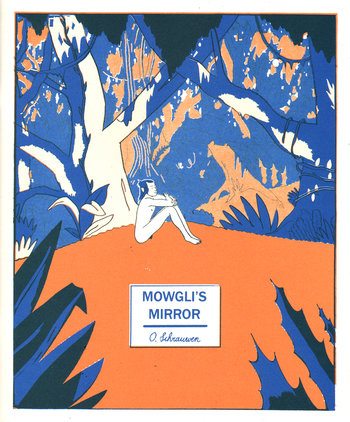 Mowgli's Mirror: And here we have Olivier Schrauwen, author of last year's best comic, Arsène Schrauwen, with not quite a new book - Mowgli's Mirror has been around in print on the European continent since at least 2011, and its wordless nature has made it a prime candidate for importation; I got one off a show table two or so BCGF/CABs ago. Still, this 44-page Retrofit/Big Planet edition marks its first North American publication, and almost definitely the first chance you'll get at finding it in a comic book store. A violent slapstick odyssey in blue & orange, the story follows Mowgli's efforts to realize a sense of physical and psychological belonging in the jungle; critic Zainab Akhtar read this an anti-imperial metaphor, which would place the work very much in line with the colonial themes explored by the artist most prominently in Arsène Schrauwen, but also portions of My Boy (2006) and The Man Who Grew His Beard (2011). Also available digitally; $8.00 (print).

Moose: The work of Belgian artist Max de Radiguès, Moose has seen a unique path to North American publication - it was serialized across an extensive set of very small, no-frills minicomics assembled and distributed by Oily Comics (I got most of 'em via mail-order subscription), then subsequently released in a collected French edition by Delcourt. Now comes Canada's Conundrum Press with an English-language collection, 160 b&w pages in a 5.75" x 8.25" softcover. The story concerns a small boy at school and in the outdoors, facing down human terrors and wild images. Pretty absorbing stuff; $17.00.

Fantasy Sports Vol. 1: I remember several people directing me to Sam Bosma at SPX 2013, where he debuted Fantasy Basketball, an energetic self-published comic about explorers playing a supernatural game of hoops in an ancient temple. This 8.5" x 11.8" Nobrow hardcover is a 56-page expansion of that work, now in color. Those interested in confluences between manga and western comics will want to take a look. Preview; $19.95.

Pandora of the Crimson Shell: Ghost Urn Vol. 1: Marking the return of Masamune Shirow to comics creation, albeit in a scenario writer's capacity, with the comic's actual pages arriving via Rikudō Kōshi of the long-running comedy 'n pretty girls series Excel Saga. Maybe this is why a new work from a creator as widely-admired (sometimes revered) as Shirow seems to be flying under the radar, although I'm told there's a licentious edge to this story of girl cyborgs that evokes the man's latter-day career in erotic illustration as much as Ghost in the Shell. Regardless, vol. 6 just dropped the other week in Japan, so there's plenty coming. The publisher is Seven Seas; $12.99.

Cheer Up #1: Lots of small-scale works this week - easy on the summertime wallet. This one's a humorous Hic & Hoc comic book release from Noah Van Sciver, which the publisher describes as "[r]eminiscent of the classic funny alt comics of the 90s." Could this be the tribute to Honk! prophesied in Revelation? Disseminated to Diamond-serviced shops via Alternative Comics, if I am not mistaken; $5.00.

Strange Fruit #1: Obviously this is not the most prominent of Wednesday's comic books to claim the participation of writer Mark Waid, but if by chance you can slash your way through the thicket of the Archie reboot and its 21 (twenty-one) variant covers, you might also find this BOOM! debut Waid has scripted from an original story by painter J.G. Jones (known for drawing high-profile superhero works like Wanted with Mark Millar and Final Crisis with Grant Morrison). It's historical SF, with a huge and powerful presence crashing down from outer space into the Mississippi floods of 1927, rife with racial tensions and economic struggle. Sample art; $3.99.

In Search of Lost Time: Swann's Way (&) The King in Yellow: Two literary adaptations with different forms of history behind them. French cartoonist Stéphane Heuet has been working to adapt Proust to comics since 1998; you might remember several NBM editions from past years. In Search of Lost Time: Swann's Way is a new 240 page W.W. Norton release, translated by Arthur Goldhammer, apparently based on a 2013 Delcourt intégrale edition (which does not collect all of the six extant albums, as some of them get into Within a Budding Grove). Maps, a glossary and other supplements are promised. The King in Yellow, meanwhile, is the latest of several literary adaptations the artist I. N. J. Culbard has published with SelfMadeHero, this time tackling the stories of Robert W. Chambers, one of the crucial bodies of American weird fiction. The 144-page softcover is distributed in North America by Abrams; $26.95 (Time), $19.95 (King).

Creepy Presents: Alex Toth: Recall IDW's release of the complete Bravo for Adventure a few weeks ago - that series isn't just among the most admired of Alex Toth's projects, but many consider it among the most striking works published on all the b&w comics magazine scene. Certainly it's what history most typically chooses to recall of The Rook, though Toth was also a contributor to the better-known Warren horror mags: Creepy and Eerie, and it's those oeuvres plumbed for this 168-page Dark Horse hardcover, an 8.5" x 11" edition featuring solo works, stories created with writers like Archie Goodwin, and even artistic collaborations with the likes of Carmine Infantino. Samples; $19.99.

Bacchus Vol. 1 (of 2): And we'll close out with the best-looking big book of stuff this week, a 560-page compendium of mythopoetic funnies created by Eddie Campbell, an expansive suite of histories and encounters (mostly) involving the storied god of wine as he and peers of many sorts navigate the modern world. Shifting tonally and narratively from volume to volume, story to story, the series seeks to evoke the energy of U.S. comic books while encompassing elements of mystery, romance and superhero fantasy - a hugely engrossing suite, rejecting graphic novel cohesion to evolve ably with Campbell's interests. Collects vols. 1-5 of the prior line of paperbacks (through "Earth, Water, Air and Fire") - the publisher is Top Shelf, via IDW. Samples; $39.99. 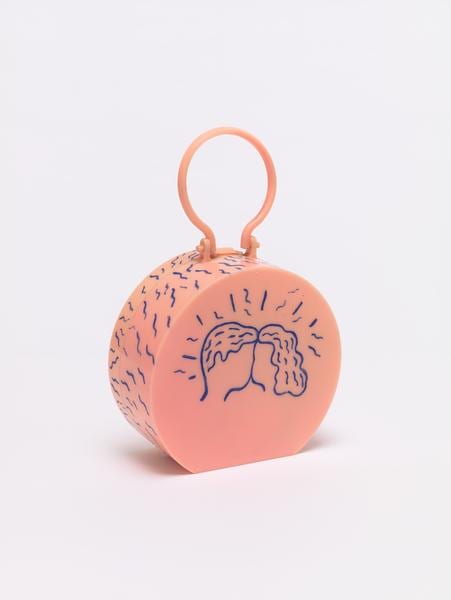