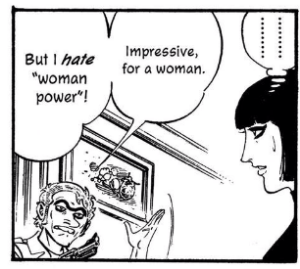 Oh, but you and I don't, sweet reader. The image above is from Doll: The Hotel Detective, a 1980 mystery/crime/espionage series from gekiga veteran Takao Saitō, which takes place inside the universe of his forever-running Golgo 13 assassination franchise. This stuff used to be available in English on an unsuccessful digital manga service called JManga, but now Crunchyroll has picked it up as part of its all-you-can-tolerate monthly subscription plan. I've personally gotten some mileage out of this release so far, as it actually presents something approaching *full* credits for all of these assembly line Saitō productions - fans of Ryan Holmberg's column might even recognize names like Fumiyasu Ishikawa, who ran with Saitō and Yoshiharu Tatsumi at the dawn of the gekiga effort. Indeed, if you download the Crunchyroll manga app for mobile devices, I think they give you the first chapter of Doll for free, which is interesting, because contrary to the seven-person crews manning some of these stories, the debutante outing is strictly an Ishikawa/Saitō joint, albeit one almost certainly availing itself of yet-unnamed studio hands tracing photographs for establishing panels and the like.

There's some other Saitō projects on Crunchyroll - older stuff, like The Shadowman from 1967, or Barom One from 1974. comiXology, meanwhile, has been distributing digital editions of Jirō Kuwata's frenetic '60s Batman comics, which were still pretty fun when ensconced in Chip Kidd's design gloss about half a decade back, but here they're presented straightforwardly and in their entirety, which is pretty cool. Three print compilations should follow from DC. Don't expect the same for Saitō and his crew. 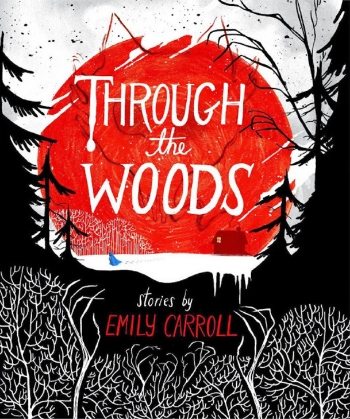 Through the Woods: LOTS of comics out this week, so I'm just gonna make an executive decision here as president of this column and fly the banner for modern horror up here in the spotlight. Emily Carroll is one of today's high-profile webcomics practitioners, specializing in self-contained, hot-colored scary stories, her library thick with troubled narrators staggering through interpersonal conflicts as manifested by beasts and terrors, en route to ill appointments with folkloric morality. Know, however, that this 208-page Simon and Schuster package is *not* a compendium of her digital works, but a presentation of four all-new stories, with one viral hit included as hook. I like Carroll's stuff; there's a lavishness to her private dramas that evoke the more extravagant AIP or Hammer movie horrors as tightened into lonesome chamber dramas, which is definitely not your typical genre approach in comics today. Samples; $14.99 ($21.99 in hardcover). 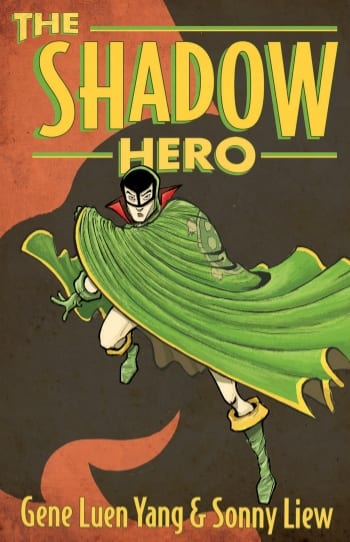 The Shadow Hero: And since I guess we're gonna talk about genre today, here is writer Gene Luen Yang with a genuine mainstream superhero revival, albeit with a bit more of a mission behind it. Toward the end of WWII, artist Chu F. Hing created a new superhero, the Green Turtle, for Rewl Publications' short-lived Blazing Comics - the feature was dominated by Asian characters, though the costumed hero appeared to be obscurely and rather noncommittally white, giving rise to theories that Hing had intended the character to be Chinese American but couldn't make it explicit. Now Yang and artist Sonny Liew devise a first-ever origin story and secret identity for the character, working themes of immigration and assimilation into a Depression era period scenario. The publisher is First Second, presenting the 176-page color result as a traditional 6.625" x 10.5" superhero trade paperback, for maximum verisimilitude. Video preview; $17.99.

Street Angel: We're about to dive into a bunch of askew takes on action comics, so I figure we might as well pause at the top to commemorate one of the prior decade's more interesting moves in that direction - artist Jim Rugg's name-making series with co-creator Brian Maruca, a 2004-05 Slave Labor Graphics presentation with salmon pink covers and laid-back action beats starring a foul teen orphan on patrol through a shitty city. AdHouse is behind this new 6" x 9", 176-page hardcover edition. Samples; $19.95.

Marvel 100th Anniversary Special - The Avengers #1: But if it's superheroes in their native habitat you seek, the "fiercely individual" canopy widens to accommodate James Stokoe, whom I'm hoping will bring as many Vaughn Bodē licks as possible to this one-off imagining of a future version of the leading super-team. Some good jokes in the sample pages - could be something. Preview; $3.99.

Tüki Save the Humans #1: In which Jeff Smith's ongoing science-based, fantasy-driven webcomic about an early human venturing out into a dangerous world realizes a 32-page color comic book-format collection from the artist's own Cartoon Books. I haven't followed the series online -- Tüki, regrettably, could not save the first iteration of his web platform -- but I enjoyed RASL enough to give whatever Smith tries a shot, eventually; $3.99.

Ragnarök #1: Howard Chaykin recently declared Walter Simonson "[t]he only man of my generation that's still producing work that's not a parody of itself," and now -- voilà! -- IDW presents a new Thor series by the writer/artist, since Marvel hardly owns Norse mythology. Laura Martin serves as colorist for what's been described as a Hellboy-like series-of-series, six issues to start, in which Thor is the last surviving god in a twilight world of evil and oppression. Preview; $3.99.

Groo vs. Conan #1 (of 4): Now this is old-school, both in terms of the characters involved and the fact that the work itself appears to be a jam of sorts, with Sergio Aragonés and Thomas Yeates(!) both putting hand to page. There also appears to be some story-outside-the-story jokes about how bad an idea this comic is, which these days is pretty current Lord & Miller comedy stuff. Has fashion come back around to Groo?? From Dark Horse, written by Aragonés and Mark Evanier, colored by Tom Luth. Preview; $3.50.

Doctor Who: The Tenth Doctor #1 (&) Doctor Who: The Eleventh Doctor #1: God, look at all these fucking comic books. This is Titan Comics' first effort upon acquiring the Doctor Who license, and I'm mentioning it here because the Tenth Doctor is being written for its first five issues by Hugo Tate creator Nick Abadzis, who is always worth following. The artist is Elena Casagrande. Meanwhile, the Eleventh Doctor will be handled by writers Al Ewing & Rob Williams and artist Simon Fraser, continuing the tradition of 2000 AD notables contributing to the franchise's comics wing; $3.99 (each).

Dredd: The Illustrated Movie Script and Visuals: And then, inevitably, comes Rebellion with their own official cross-platform item, an all-encompassing pre-production experience matching the 2012 motion picture's original screenplay (by Alex Garland) with a comics adaptation created by the artist Jock to better visualize how the work product might function as a movie. Expect additional production art and commentaries across 240 pages; $35.00.

In Clothes Called Fat: Oh, but let's get back to manga. I was thrilled to read the back cover copy of this new Vertical release, which notes a curiosity that I've observed on several occasions: that extremely 'mainstream,' dramatic manga would frequently adopt a tone (if not necessarily an approach) familiar to American readers of heavy-duty 'alternative' comics. Certainly in 1997 you'd have to hit up the small press for an English-language comic assailing issues of bodily comfort and deep distress without the cushion of genre, yet there was 26-year old Moyoko Anno, serializing this story in not a manga anthology, but the weekly Shukan Josei magazine. Admirers of Kyoko Okazaki might particularly enjoy these 264 pages; $16.95.

MPD-Psycho Vol. 11: HEY, and here's Dark Horse whipping out a little seinen crime/horror - the first we've seen of this Eiji Ōtsuka/Sho-u Tajima series in about two and a half years (vol. 20 was released in Japan earlier this month). Enjoy each of these 224 pages slowly! Preview; $12.99.

The League of Extraordinary Gentlemen Vol. III: Century: After three volumes' worth of division, two full-sized spinoffs, and miscellaneous Alan Moore controversies (current target: a certain Brett Ratner motion picture, follow-up here), I'd actually forgotten this wasn't already out, but for the record - a 256-page color hardcover, collecting the entirety of Moore's & Kevin O'Neill's journey of a hundred years with various appropriated cultural fictions, toward a negative vision of debased contemporary enchantment. From Top Shelf/Knockabout; $29.95.

Goodnight Darth Vader: Likely not the favored brew for most readers of this column, but I've gotta say - the last time I was inside a Barnes and Noble, two comics were impossible to avoid. First there was Bryan Lee O'Malley's Seconds, which has an exclusive B&N dust jacket (that's how bad people want to board that train), and then was this, the newest of Jeffrey Brown's kid-targeted Star Wars funny books from Chronicle, the last one of which grossed seven figures as reported through BookScan alone; factor in school book clubs and the like, and we're probably talking multi-millions. Just so you know what mainstream comics look like; $14.95.

Comics Squad: Recess!: Hey, since we're on the topic - as far as I can gather, this is an original kids' humor comics anthology from Random House, a 144-page production stocked with the likes of Raina Telgemeier, Dav Pilkey of Captain Underpants, Matthew Holm of Babymouse, and the aforementioned Gene Luen Yang, YA superstars all; $7.99.

Mike Mignola's Hellboy - Artist's Edition: I'm betting you still have over a hundred dollars left. Don't spend it on gas. Try this 12" x 17", 200-page block of Mike Mignola original art, mainly focused on the first five issues of the new Hellboy in Hell series, but also including some much older stories and shorts. Or mail the cash to me; $125.00.

The Sakai Project: Artists Celebrate Thirty Years of Usagi Yojimbo: Finally, we have a tribute to the creator of Usagi Yojimbo (who also might be lettering Groo vs. Conan this week), with all proceeds going to the artist to offset family medical bills. Lots of pinups, from Walter Simonson, Jeff Smith, Sergio Aragonés, Howard Chaykin, Mike Mignola, and people not otherwise mentioned this week, like Richard Corben, Art Adams, Dave Gibbons, Matt Groening, William Stout, and more. Samples; $29.99. 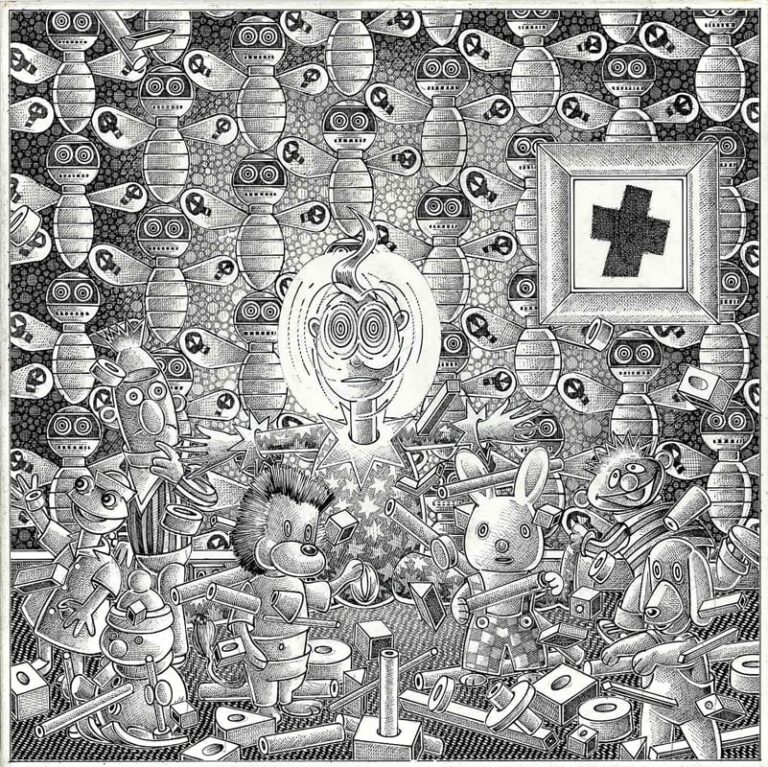 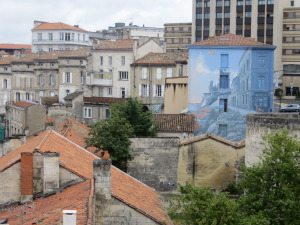