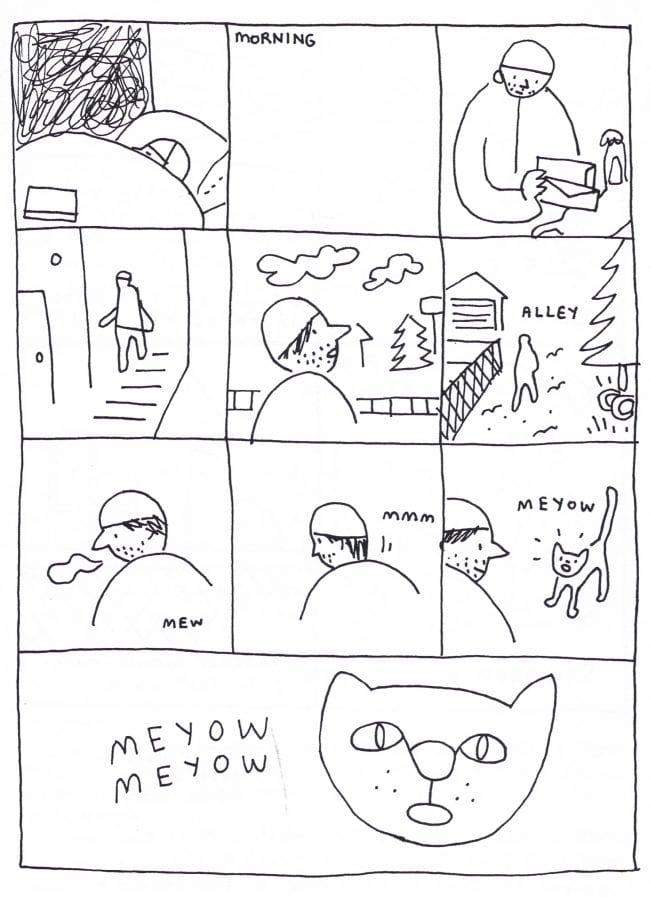 Just a little page from last year's King-Cat #76, from a story titled "(Memory of) Frying Up Burgers in My Cold, Miserable Apartment, Alone, Listening to Sports Radio". Relevant to what's coming... 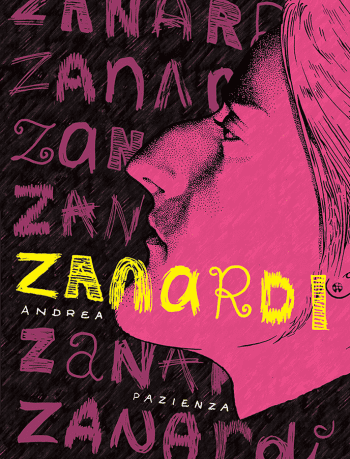 Zanardi: In his paper "Cannibale, Frigidaire, and the Multitude: Post-1977 Italian Comics through Radical Theory", as adapted to article form in the comics anthology Mould Map 4 (Landfill Editions, 2015), writer Federico Pagello identifies Andrea Pazienza as "the most popular" of the artists who formed Frigidaire, a long-lived venue for experimental and confrontational Italian comics, graphics and journalism. His peers Stefano Tamburini & Tanino Liberatore may have traveled farther on the back of the violent cyborg character RanXerox, but Pazienza -- active in publishing since his student days among the radical left in the Bologna of the late '70s -- "expressed the political, cultural and existential preoccupations of the most sensible members of his generation," bringing him visibility to a national audience beyond typical comics readers. Zanardi is a 256-page, 7.75" x 10.5" Fantagraphics hardcover translating what Pagello identifies as likely his best-known work, depicting "a cynical and ferociously individualistic lifestyle" as embodied by the young man of the title, representing "the mutated climate of the new, post-industrial, heavily hedonistic 1980s Italy." All relevant strips should be included, from the early '80s Frigidaire installments to an unfinished serial published in Comic Art, which ceased upon Pazienza's death in 1988 at the young age of 32. Quite possibly the vital global comics release of the season. Translated by Alberto Becattini with Simone Castaldi, and introduced by the artist Manuele Fior; $29.99. 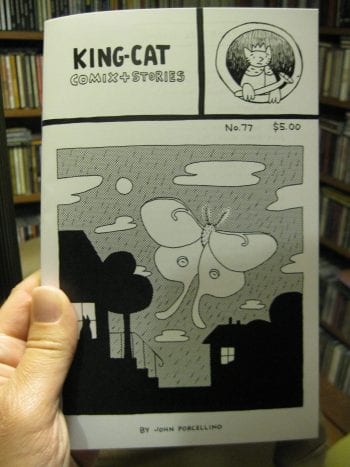 King-Cat Comix & Stories #77: You're damn right King-Cat gets the spotlight again; the signature project of artist John Porcellino, this digest-sized b&w zine offers one of the art form's best-sustained viewpoints into a person's very particular worldview: thoughts, visions, environment, life. This 40-page number is an All-Animals issue, with stories on "possums, dogs, cats, Midwestern mountain lions, moths, horses, frogs, toads, and more!" That's not my hand in the pic, I think it's Porcellino's. Comic book store distro by Alternative; $5.00.

In the Pines: 5 Murder Ballads (&) A New Low: Two more from Fantagraphics. In the Pines is an 8" x 11", 136-page hardcover from Dutch cartoonist Erik Kriek, whom some of you will remember from the Oog & Blik wordless meta-superhero series Gutsman Comics from years back. Here he adapts five songs from the tradition of crime and tragedy in musical narrative, although it seems this edition (along with every other translation) lacks the bonus CD included with the 2016 avant-verlag original, which presented the five titular songs along with an original creation sung by Kriek himself...! A New Low, meanwhile, is a 7.25" x 10.5", 128-page collection of Johnny Ryan cartoons drawn from his long history with Vice magazine - "some of the most transgressively hilarious and politically incorrect comics to ever grace a glossy, national magazine," crows the publisher. This column is pretty transgressive too, you know. I say "fuck" sometimes. They wouldn't let you say "fuck" at Comics Alliance; I tried. One time I included a David Foster Wallace quote with the word "fuck" in it with an article, wondering if they'd edit out the word "fuck" if David Foster Wallace said it. They did; $24.99 (Pines), $19.99 (Low).

Golden Kamgod, way to pluck that low-hanging fruit. I dunno, I just have a really visceral aversion to these DC serious-but-funny takes on Warner Brothers and Hanna-Barbara cartoon properties, which seem designed primarily to coax oh my god such a weird idea ha ha ha ha ha ha reactions from credulous entertainment news sources that translate to added visibility, theoretically leading to impulse sales from curious and/or potentially-ironic-but-probably-assertively-'sincere'-and-anyway-still-buying-so-it's-exactly-the-same-thing-as-far-as-the-publisher-is-concerned consumers of popular 'geek'-categorized franchise content. Hey, it worked for Archie. The Flintstones book is supposed to be actually good, and, as we know, only one (arguably) actually-good title is needed to valorize the whole line's calculation, given the curve on which these corporate funster efforts are typically graded. Whoops, I just fell into their clutches by even talking about it! Still, NONETHELESS, the Lobo/Road Runner book is drawn by Kelley Jones, and it's nice to see his work, and to know he's getting paid. Maybe It's Good (TM). Anyway:

Golden Kamuy Vol. 1: Being the launch of a new VIZ translation project for a prominent seinen manga, popular in the corners of online I happen to visit. Winner of last year's bookseller-selected Manga Taishō award for new-ish series, this ongoing early 20th century period adventure from artist Satoru Noda sees a veteran of the Russo-Japanese war searching for gold up north in Hokkaido with the aid of an indigenous Ainu girl, all while pursued by the Imperial Army. Apparently the Japanese text makes use of the Ainu language, although that's probably something only identifiable from the translation notes in this edition. The series is up to vol. 10 in Japan and runs in a weekly magazine, so settle in if you like it; $12.99.

Kitaro and the Great Tanuki War (&) Dorohedoro Vol. 21: Two glimpses into the society of creatures, via separate Japanese generations. Kitaro and the Great Tanuki War is the third installment of the Zack Davisson-translated line of Shigeru Mizuki yōkai comics from Drawn and Quarterly, which is to say the publisher's fourth Kitaro collection counting a 2013 book with translator Jocelyne Allen. Much of this 176-page edition is occupied with a long storyline from 1967 (I think), although there's a few added comics along with the supplementary texts and bonus games. Dorohedoro is the enduringly popular grimy fantasy work of artist Q Hayashida, which publisher VIZ has now placed in exact parity with the Japanese editions... until next week, when vol. 22 drops overseas; $12.95 (Kitaro), $12.99 (Dorohedoro).

Goodnight Punpun Vol. 6 (of 7) (&) Master Keaton Vol. 11 (of 12): More manga, both from VIZ, both from experienced authors, both nearly finished. Goodnight Punpun is the bleak road-to-adulthood epic of Inio Asano, now on its penultimate two-in-one volume. Artist and Journal contributor Sarah Horrocks says we're "[g]etting to the part of the book that is better than everything," which sounds like a recommendation to me. Master Keaton is the episodic insurance investigation series created by Naoki Urasawa & Hokusei Katsushika, which was directly succeeded in 1994 by the former's suspense series Monster in the pages of Big Comic Original. There is technically a 13th volume, collecting a much later revival series by Urasawa and editor/contributing writer Takashi Nagasaki, but VIZ does not appear to have it scheduled right now (and may not even have it licensed); $24.99 (Punpun), $19.99 (Keaton).

The Complete Skizz: This one's been in print a few times in the past, but the name "Alan Moore" is a powerful one, and this 1983 project is *technically* the only open-and-shut self-contained serial he completed for 2000 AD, setting aside the rather modular nature of The Ballad of Halo Jones. It's also vintage 2000 AD in a way, as it riffs on a popular concept from domineering media (here the '82 film E.T. the Extra-Terrestrial) with a particular local twist - often this manifested in the form of satire or white-knuckle pacing, but Moore (who was assigned the concept editorially) added a very regional, working-class texture to the tale of a space alien crash-landed in Birmingham. Jim Baikie provides the art for these 272 pages, published in North America by Simon & Schuster; $25.00.

The Leaning Girl (&) Indeh: A Story of the Apache Wars: New editions here of works previously available. The Leaning Girl is the IDW version of a book previously published in 2014 by Alaxis Press subsequent to a crowdfunding campaign; it's an English translation of a 1996 album in the Obscure Cities series of allegorical urban fantasies created by artist François Schuiten and writer Benoît Peeters. Quite a good place to start, as it boasts a sprawling, mysterious plot and some of Schuiten's most lavish draftsmanship, with added photo-roman sequences shot by Marie-Françoise Plissart with the acting prowess of artist Martin Vaughn-James (of the extraordinary 1975 proto-graphic novel The Cage). Some notable sex and gender thematics too, as I've detailed before. In contrast, I don't think I noted Indeh anywhere in this column when it was first released in hardcover last year; released by the generalist publisher Hachette and written by the actor Ethan Hawke, who revised the script from a screenplay he'd been working on for over a decade. Often these factors don't add up to impressive comics, but I keep hearing decent things about this 240-page package, now in softcover, drawn by Greg Ruth of various Dark Horse series among other pursuits, who's picked up an Eisner nomination for his efforts; $29.99 (Leaning), $25.00 (Indeh).

Lost Planet (&) Prince Valiant Vol. 15: 1965-1966: And here's 'classical' adventure comics stuff, both retrospective and simply long-lived. Lost Planet was a 1987-89 Eclipse Comics series from artist Bo Hampton, evoking the derring-do of early SF pulp and the values of lavish adventure comics. IDW is presenting its hardcover collection of the work in de-colored form, so as to highlight the duo-shaded texture of the original art. Prince Valiant, of course, is the adventure comics institution from Hal Foster, once again presented by Fantagraphics in a 10.25" x 14" hardcover; $29.99 (Planet), $34.99 (Valiant).

Perspective in Action: Finally, your comic-that's-also-a-book-on-comics-and-other-things-too of the week comes from the veteran alternative cartoonist and commercial illustrator David Chelsea, a formidable talent who's written frequently on the topic of mastering perspective in drawing. This is his third release with Watson-Guptill on the topic, a 176-page comics-format guide to practical creation of a variety of example projects, with an eye toward "major perspective-related developments in history" across a variety of media; $22.99. 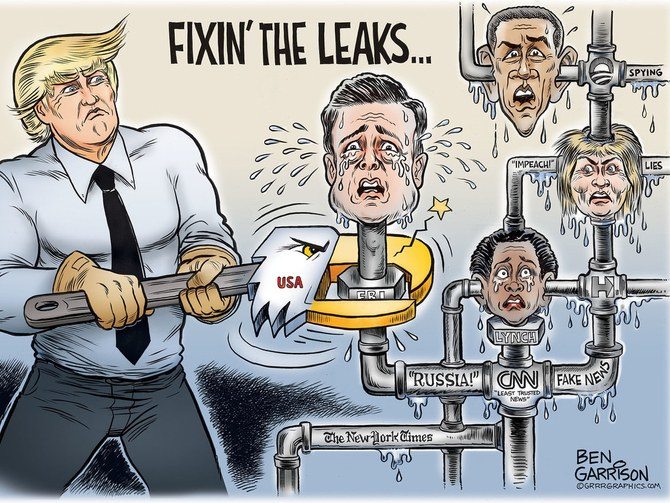