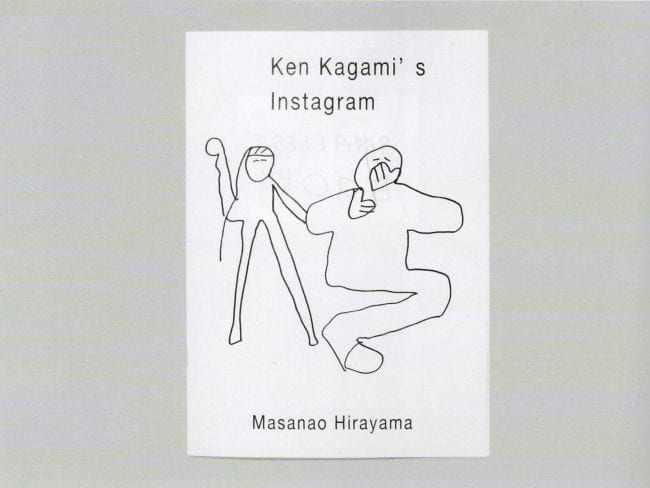 Not a comic that I own, but a picture of a Japanese zine from the just-released fifth issue of Collection revue, a Parisian arts magazine that's been going at a not-quite-annual basis since 2010. All of the text is presented in both French and English, and every issue consists of nothing but interviews with artists or art groups, as well as samples of their works. There has long been a significant comics component to Collection, and the 288-page new edition features the well-known American artist Aidan Koch, as interviewed by the educator, Best American Comics editor and frequent Journal contributor Bill Kartalopoulos. My attention, however, was first drawn to a talk with the creator of the zine above, Tokyo artist Masanao Hirayama, as conducted by Collection co-publisher Vanessa Dziuba. The interview is very short -- it's unclear as to which language was initially used for the discussion -- and focuses mainly on the minutiae of Hirayama's life. Ken Kagami, of the zine above, is an artist and a friend of Hirayama's, as well as the proprietor of Strange Store, a Shibuya curio shop with books and t-shirts. "Ken Kagami's Instagram" was assembled in two or three days for the Ohosho Zine Fair in at Strange Store in 2016; 30 people attended, which Hirayama deems a success. Later that year he made an appearance at a music event: "I blew into a balloon until it exploded. I called it 'The sound of a balloon exploding.'" His drawings incude stick figures and smiling faces and swerving lines; he also works in sculptural arrangements of foil, metal and plastic bags. He has no day job, and prefers to stay inside at home. "If I have nothing to do," he says, "I like to do nothing."

Everything is Flammable: Two autobiographical comics up here this week, both from experienced artists on the global alt-comics scene. Gabrielle Bell has done some fable-like shorts, but I think she's best known for her memoir pieces, notably assembled in the Uncivilized Books releases The Voyeurs (2012) and Truth is Fragmentary (2015). This 160-page new one is also from Uncivilized, a 6" x 9" color hardcover dedicated to one narrative covering the space of a year, as Bell deals with finding a new home for her displaced mother. Some of this material (or at least material in this vein) appeared in Kramers Ergot 9, so if you've seen that you'll know what sort of minutely-observed, class- and economic-conscious stuff is in store; $25.95. 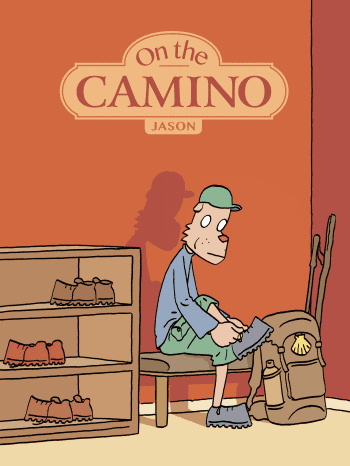 On the Camino: On the other hand, the Norwegian cartoonist Jason, while very familiar to readers of this site, is not typically associated with autobiography. That all changes with this 192 page Fantagraphics hardcover, in which the artist recounts a month-plus journey down 500 miles of a pilgrimage route in Spain. Everybody is still drawn as an animal, don't worry. The publisher will also have new hardcover editions of Jason's earlier books I Killed Adolph Hitler (2007) and Lost Cat (2013) this week; $24.99.

My Lesbian Experience With Loneliness: This 152-page Seven Seas manga release is unique in several ways. It's a self-contained book by a solo cartoonist, Kabi Nagata, who initially posted the work in segments to the Japanese art-sharing site pixiv, where it drew a great deal of attention - it's Nagata's autobiographical chronicle of her prolonged struggle with depression and isolation, which eventually led her to seek human connection by appointment with a sex worker. Sketchy and essayistic, this is small-scale manga drawn from life; $13.99.

Please Destroy My Enemies (&) Your Black Friend: Two smaller releases distributed to comic book stores by AdHouse, which also debuted the fifth issue of Ethan Rilly's Pope Hats at TCAF the other week. You'll have to wait for that, though! Please Destroy My Enemies is a 6" x 6", 64-page collection of four-panel gag comics by Michael Sweater, a contributor to Vice and other venues. Your Black Friend is a 12-page color comic book from New Orleans artist Ben Passmore, "a letter from your black friend to you about race, racism, friendship and alienation." Nominated for this year's Best Single Issue/One-Shot trophy at the Eisners, alongside Tim Hensley's Sir Alfred No. 3 and Noah Van Sciver's Blammo #9. Both of these works are published by Silver Sprocket, an arts group out of San Francisco; $6.99 (Enemies), $5.00 (Friend).

One More Year: Being the latest weighty collection of Megg & Mogg comics by Simon Hanselmann, following Megahex (2014) and Megg & Mogg in Amsterdam (2016). Not quite sure what's in this 220-page hardcover, though I presume at least some of the '14 Space Face release Life Zone is included, since I can remember the line that gives this book its title. Note that Hanselmann has mentioned that this release will end the Megg & Mogg series' current setup, at least in terms of which characters are pinging off which; $24.99.

Billie Holiday (&) The Golem's Mighty Swing: A pair of new releases for books we've seen before, provided we've seen all the books. Billie Holiday is a 1991 biographical album -- more narratively elusive than what is typically seen on bookshelves today in this genre -- from the Argentine team of artist José Muñoz and writer Carlos Sampayo, the same creators behind the wildly expressive crime series Alack Sinner (which IDW should finally begin releasing in English within a month's time). Fantagraphics first released it in English in '93, and now NBM offers a 9" x 12", 80-page hardcover edition. The Golem's Mighty Swing is... god, a 2001 book from James Sturm, quite a profile-raiser, given its status as a long, self-contained, serious-minded 'literary' comic releasing in the millennial wake of Jimmy Corrigan, when graphic novels were becoming big news in the greater media sphere. Baseball, religion, bigotry: much American history on display in these 112 pages, published then and now by Drawn and Quarterly; $19.99 (Billie), $16.95 (Golem).

The DC Universe by Mike Mignola: Regardless of what the title implies, this is not a comprehensive collection of the eventual Hellboy creator's quixotic work for DC - for example, it apparently lacks Cosmic Odyssey, which just got its own new hardcover a little while back. It does, however, include the 1987-88 Phantom Stranger miniseries he drew with inker P. Craig Russell and writer Paul Kupperberg, as well as the nearly-concurrent World of Krypton project he did with inker Carlos Garzon and writer John Byrne (who would also contribute to the earliest Hellboy issues). There's also some smaller works scattered around, including a Neil Gaiman-scripted short from 1989's Swamp Thing Annual #5, as well as 1993's Batman: Legends of the Dark Knight #54, which for all intents and purposes is Hellboy #0, complete with Mark Chiarello's standard-setting color work; $39.99.

Your Name.: If you've been paying any attention to international cinema for the past 12 months, you've probably heard at least passing mention of Your Name., a feature-length animated film by Japanese auteur Makoto Shinkai, who serves as writer, director, storyboardist, art director, cinematographer and editor. Indeed, his breakthrough work, the 2002 OVA Voices of a Distant Star, was created (barring audio elements) entirely by himself; it also laid out the tone which he'd explore in his immediately subsequent larger projects, with an emphasis on the emotive longing of young protagonists. I say "immediately subsequent" because I haven't seen anything he's done since his 2007 feature 5 Centimeters per Second - as much as I respect Shinkai's fervent pursuit of autonomy in the heavily schematic and committee-driven anime world, I find his actual work drippy and tedious, if always impressively art-directed. Nonetheless, something about the boy-and-girl body-swapping SF disaster allegory riffs of Your Name. struck a major chord in Japan, where the film grossed an absolutely insane 200+ million USD in theaters. Anyway, this Yen hardcover is the official prose novel of the film (actually preceding it in Japanese release by a few months), written by Shinkai himself, in case you're interested; $20.00.

CARtoons Magazine #9: There's a lot of history behind CARtoons, the automotive magazine founded in 1959; many cartoonists were associated, from the mainline likes of Alex Toth to underground artists such as Robert Williams. It stopped running in 1991, but last year a revival occurred, with both digital and print items offered. This is the newest issue, a 64-page "Rockabilly Surf" special with a pull-out poster by Shawn Dickinson, whose early animation and '60s hot rod-informed art was granted an IDW retrospective last year; $5.99.

John Stanley: Giving Life to Little Lulu: Finally, your book-on-comics of the week is a 10" x 13" Fantagraphics hardcover from longtime (as in 'going back to 1960s fanzines') writer-on-comics Bill Schelly, offering a 184-page "biographical portrait" of the character-driven funnybook master, with many art samples and photographs included; $39.99.

This week's front page image is a detail from Untitled, a work by Yannick Val Gesto, as presented on the outer jacket to Collection revue 5. 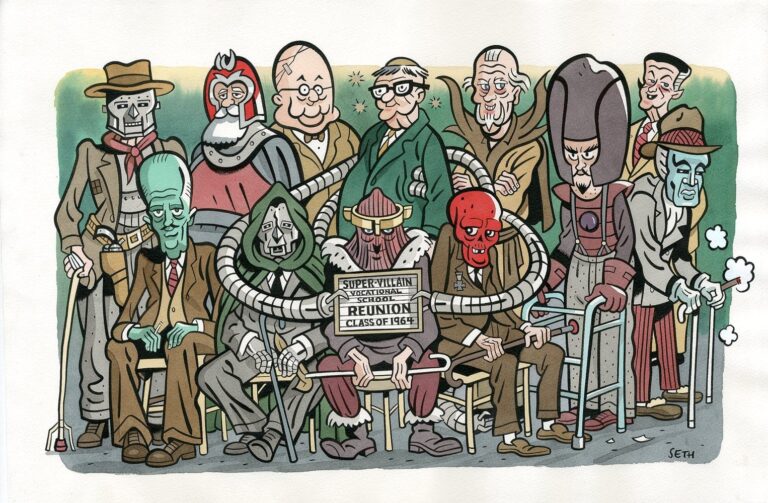 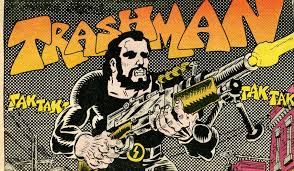