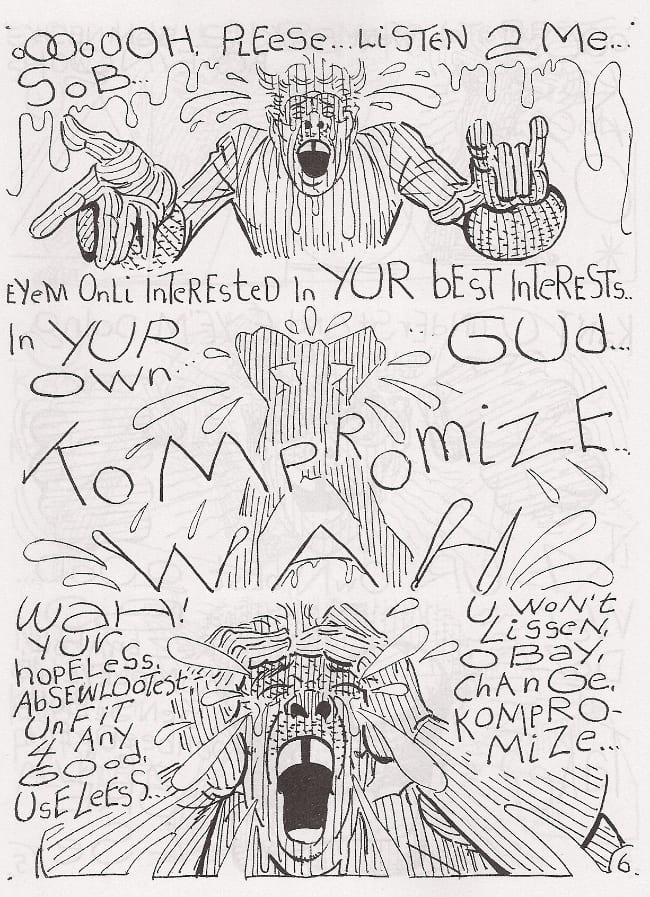 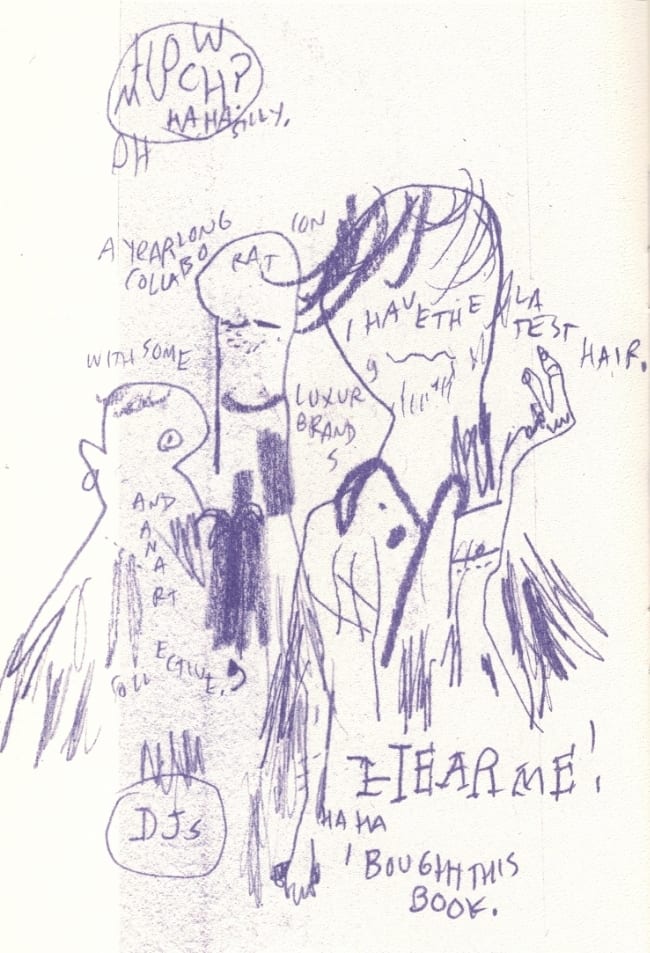 Hopefully I am not so deluded that I am seeing things I merely want to see rather than what is actually there, but I think there's a lot in common between these two images. Up top, of course, is Mr. Steve Ditko, whose Grey Negotiator communicates his philosophy of life in a manner that leaves no question that he is an absolute buffoon. He can't even spell the words right as he speaks them! Quite an accomplishment, but as with all things solo Ditko, form and content are inseparable - the misspellings are not just the artist giving this dummy a stupid voice, but symbolic of the affront to rationality that his tendency toward conciliation represents. If A is not A, then "I'm" might as well be "eYeM".

Below this, we see new work by the always-interesting Warren Craghead, who draws the newest issue of Ley Lines, an ongoing artist's showcase series ("exploring the intersection of comics and the various fields of art & culture that inspire us") from Grindstone Comics & Czap Books. Craghead's issue is set at an art fair, "giant sprawling shopping-mall warehouses where galleries from around the world can show work to half-interested celebrities and speculating collectors," per an uncredited description on the back cover. These people are utter balloons as well, and for 24 pages Craghead observes them in his characteristic style.

Both pages mock their targets by messing up their dialogue and drawing them all goofy; they're quite similar in that way. However, Ditko... wait for it... is more objective, constructing his lampoon from letters and lines charged with specific, readable ideological meanings. Craghead's drawing, at least in this book, gives the impression of distinct subjectivity - his scribbled figures, while funny, contextually read as covert sketches, as if he'd been carrying a book around with him at the fair and only stole as many seconds as possible to catch the essence of these fools. His *lettering*, though, reads as more considered. As with other works of his, letters creep out of orderly lines to traverse the page; the best of Craghead's works (say, How to Be Everywhere) provoke a feeling of excitement from positioning words exactly along the path of the reader's eye, forcing the acceptance of words and pictures simultaneously, as if you are less reading something than realizing it. Here, this technique is used for humorous effect - Craghead doesn't have characters misspell their words, but instead hides letters inside drawings or disrespects the spatial expectations of good typography. The result is characters that barely seem to know what they're saying, even while everything they're saying is junk. That it's difficult to tell who, exactly, is talking, and what, exactly, is background noise, is most assuredly the point. 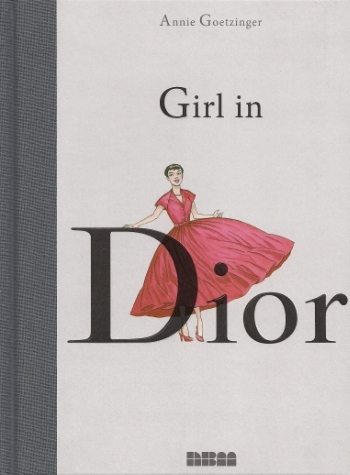 Girl in Dior: This was a show debut at MoCCA last weekend; the artist, Annie Goetzinger, was in attendance. Despite a career dating back to the experimental period at Pilote in the early '70s, Goetzinger's English-language releases have been limited to the obligatory Heavy Metal shorts and a spot in the Catalan Communications' Berlin Wall anthology Breakthrough (1990). Now, however, NBM has brought over a trim (8.5" x 11"), well-designed hardcover edition of her most recent solo album, a 2013 account of a decade's goings-on at Christian Dior's fashion house in the '40s & '50s. Some may call it a 'biography' of Dior, but its 128 pages are really a series of vignettes drawn from the artist's research among women who worked for Dior at the time, focused equally on the process of fashion design and the exhibition of wares. Expect no shortage of images like this: 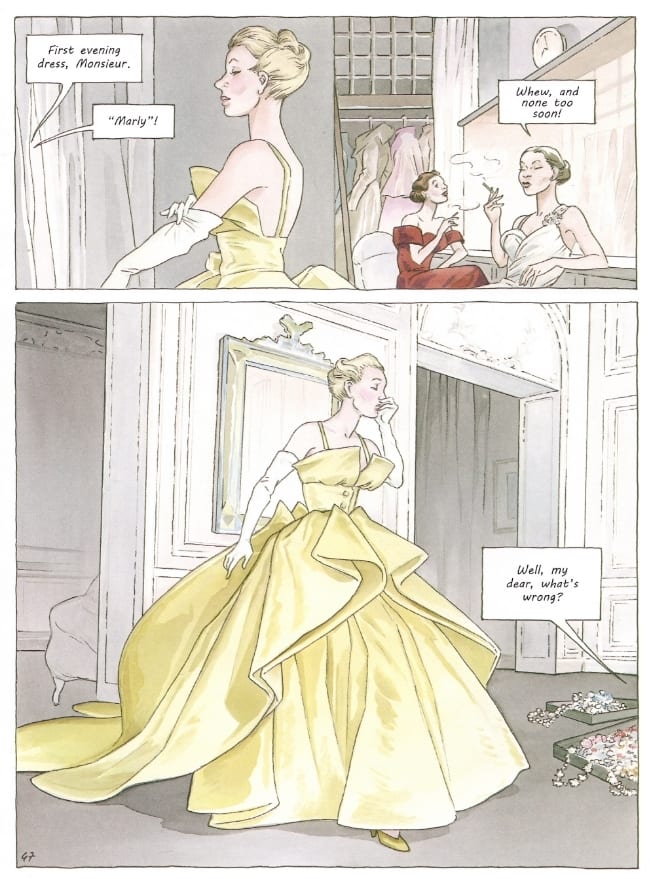 Hm? What's wrong? Not so much. The album is narrated by a fictional character, young Clara Nohant, a fashion writer who finds herself drummed out of the business after organizing a rather enormously condescending photo shoot among the working class of Montmartre. But expulsion from the dowdy social concern of journalism merely facilitates our heroine's entry into the glorious realm of Art, of Beauty: soon she is a Dior model, the incarnation of Parisian elegance, symbolic (it is suggested) of both a nation's recovery from the suffering of war and the great qualities of dressmaking as opposition to the machine age: "the human, the personal, the inimitable." So sensitive is Clara that she blanches at the notion of buyers manhandling these Great Works, though Dior himself contentedly grins; these are working artists, not so much ignorant of the poverty on the streets outside their luxurious fêtes but unconvinced that the existence of such argues against the worthiness of Beauty's ideal.

And as they go, so does Goetzinger, putting much of her emphasis on visual, sensual qualities. The original art for this page was on display at the show, and neither digital reproduction nor even its printing in this book really do it justice; the red dress actually seemed to glow from inside. Still, you do get a sense of this artist's facility with texture - whole scenes become a riot of fabric, reproduced meticulously in the service of both verisimilitude and pageantry. Literary qualities are minimal; even the small philosophical points identified above are less explicated than mentioned quickly and left in the air, ideally to be embodied by the work of these artists, until the trends pass and youth fades, the ephemeral character of beauty analogized by Goetzinger to the early death of Dior himself. It was late at the show when I found her - there was ten minutes left in her signing. She looked quite stern, punching characters into a text message. Nobody at the table spoke until she was finished. Preview; $27.99. 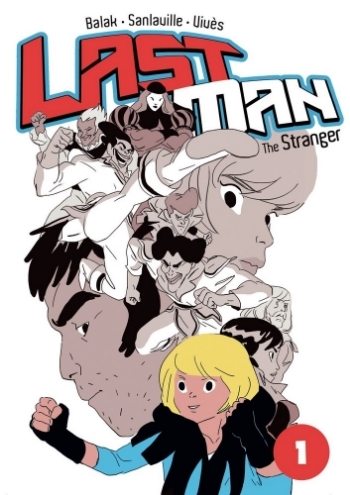 Last Man Vol. 1: The Stranger: Speaking of France, here we have this year's winner of the Prix de la Série at Angoulême - maybe the highest-profile work of manga influence over bandes dessinées right now. The creators are writer/artist Bastien Vivès (whose Polina and A Taste of Chlorine have been released in translated form by Jonathan Cape), writer Yves “Balak” Bigerel (who's done some digital work for Marvel and Thrillbent), and artist Michaël Sanlaville (making what I believe is his translated debut). It's a big, wild shōnen-styled fight comic, each of its six extant volumes tipping the scales at over 200 pages. I suspect this series will make a good pickup for First Second, releasing its debut edition as a 6.05" x 8.47" paperback, perfect for mingling with Attack on Titan. Preview; $9.99.

Zenith: Phase 3: Time waits for no man, and thus my 'comprehensive' overview of Simon & Schuster's 2000 AD releases with Tucker Stone is now obsolete, *SOB*! This is widely considered to be either the best or the start of the best stretch for the superhero pop star saga from writer Grant Morrison and artist Steve Yeowell, the latter delving yet deeper into stark and startling b&w effects. A 144-page hardcover, with one more book yet to be distributed by S&S this summer; $25.00.

Angry Youth Comix (&) Top 10: Together at last! These are two new collections of works which found their greatest popularity in the millennial period. Angry Youth Comix is a 424-page "toilet-ready brick shithouse" collecting the entirety of the Fantagraphics run of comics by Johnny Ryan, which gradually transformed from a 'fuck sensitivity' comedy forum into a uniquely despairing, bloody thing. Top 10 is 352 pages of superhero comics by Alan Moore, Gene Ha & Zander Cannon, refashioning the genre as a television police procedural with a huge cast and an expansive setting. Many superhero comics of that time adopted crime and detective fiction influences - really, this era was the last time Moore-scripted works seemed in synch with the most popular genre approaches. Angry Youth preview; $49.99 (Angry Youth), $24.99 (Top 10).

Legend of the Scarlet Blades: A Humanoids reissue of work by Italian cartoonist Saverio Tenuta, positioning this 204-page samurai story in the tradition of Hiroaki Samura. It's a 7.9" x 10.8" hardcover; $29.95.

Aquila #1 (of 5) (&) The Fox #1: Two new comic book debuts. Aquila is another of Rebellion's efforts to repackage 2000 AD serials as comic book miniseries or one-shots for the Diamond-serviced specialty market. This one's a big, gruesome violence comic written by Gordon Rennie, tracking the affairs of a gladiator bade by godly forces to slay the deserving. Leigh Gallagher provides muscular art for now, with Patrick Goddard on deck. The Fox is part of Archie's ongoing revival of its superhero line, notable for the participation of longtime genre writer Mark Waid and veteran artist Dean Haspiel. Aquila preview, Fox preview; $3.99 (each).

My Neighbor Seki Vol. 2 (&) Monster Perfect Edition Vol. 4: Your manga selections, both ongoing. Vertical is behind Seki, a Takuma Morishige comedy about a girl who can't help but spy on the fantastic misbehavior of the boy at the desk next to her in class. VIZ continues to flog Monster, the career-redefining suspense serial fronted by Naoki Urasawa, now in fancier two-in-one volumes; $10.95 (Seki), $19.99 (Monster).

Last of the Sandwalkers (&) The Cartoon Guide to Algebra: Kids - they read comics. Sometimes you can educate 'em. Two specialists with the demographic arrive this week. Jay Hosler has done a lot of science-themed work, and Last of the Sandwalkers sees him working in a fictive apparatus, as a young beetle defies local authority to learn the facts about the world. First Second is publisher of the 320-page work. Larry Gonick is maybe the most experienced cartoonist of this type around, and his new 240-page project with William Morrow lays down some facts about math. Sandwalker preview, Algebra preview; $16.99 (Sandwalkers), $18.99 (Algebra).

Frank Miller's Ronin: Gallery Edition: Finally, your large and costly reprint of the week is definitely this 12" x 17", 328-page hardcover, facilitated by DC and Graphitti Designs, aiming at reproducing Frank Miller's b&w original art in color. Why not celebrate the Daredevil internet show with the best of Miller's works as a writer/artist? I mean, you *could* just read a normal edition, but that would ruin my conclusion here; $195.00. 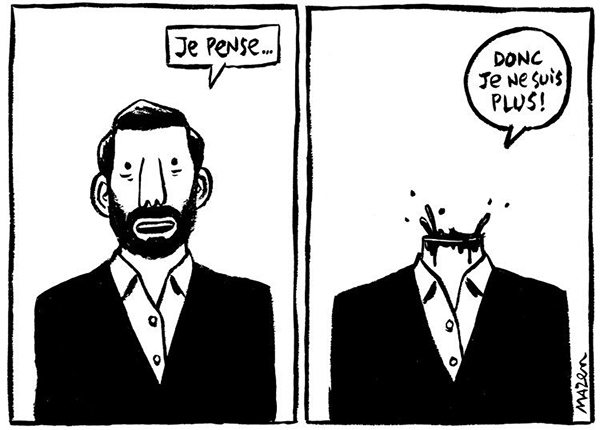 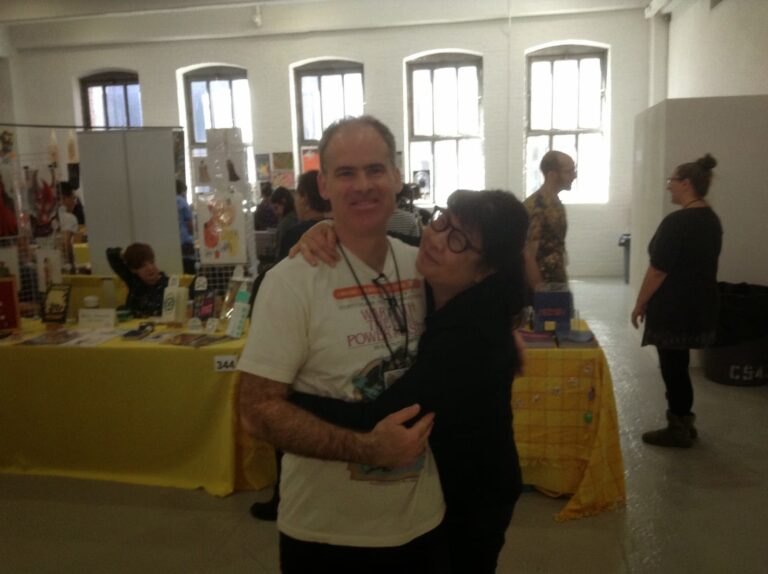