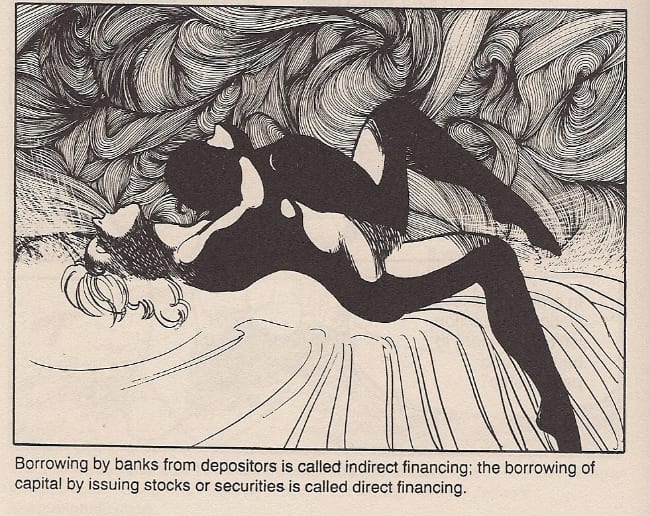 So, in 1986, Shōtarō Ishinomori -- the creator of Kamen Rider and Cyborg 009 -- began work on something called the "Manga Primer to Japanese Economics," which was sort of like the diagrammatic educational comics you see in bookstores today, except Ishinomori also seems to have used the commission to throw his hat in the ring of salaryman intrigue drama, resulting in a book full of shadows over faces and half-naked ladies and urban riots and squabbling factions and missiles blowing up oil rigs and a corpse in the Thames and sexy juxtapositions of banking facts with *personal* transactions (above) and omniscient captions saying things like JUDGING FROM THE QUALITY OF HIS SUIT, HE WAS A MAN OF WEALTH and also a climactic, inspiring speech about pencils, and then in 1988 the University of California Press commissioned a translated edition of the first volume and somehow it's still in print and I bought a used copy for $4.50 last week, and my life is just better. 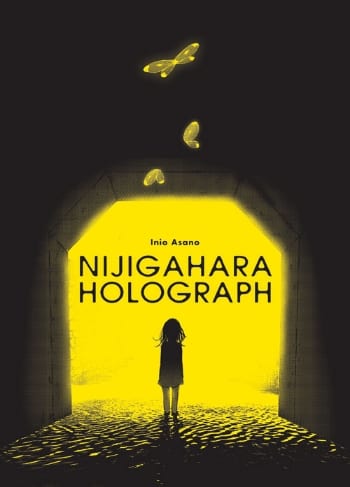 Nijigahara Holograph: Call me provincial, but this 2003 series is always what I've known to be the 'beginning' of Inio Asano, one of the great names among mangaka whose works saw unauthorized translation and free distribution on the internet in the middle third of the '00s. Kyoko Okazaki was also well-known among readers of that time, as was the considerably more populist Naoki Urasawa, but it's maybe Asano who continues to enjoy the most fervent appreciation today via Oyasumi Punpun, a veritable magnum opus of melancholia spanning thousands of pages, none of which are especially likely to enjoy legitimate publication any time soon, given the size of the work and its placement with a major manga publisher, beholden to offering the license first to a comparatively youth-focused publisher like Viz. Nijigahara Holograph suffers no such restrictions, and so its panorama of distressed, depressed, forever-struggling characters now arrives as an all-in-one Fantagraphics hardcover, 296 pages of surreal trauma tantamount to horror. It's doubtful anyone would have licensed Asano's work in the first place had it not been so widely disseminated online, but at the same time there's forever the question of whether the enthusiasm of free access will translate to return on a publisher's investment, so: have at it? Preview; $29.99. 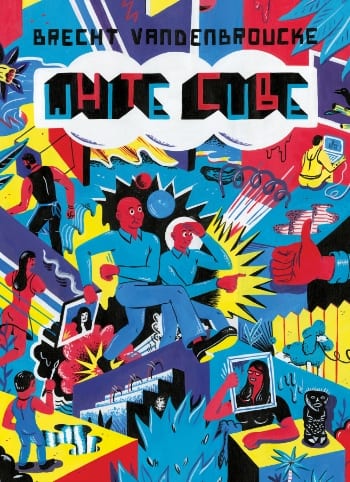 White Cube: Of course, the internet is but a sprawl of cities and towns and boros and hamlets, only a few of which we ever momentarily inhabit. You'd think that new Belgian cartooning doesn't have the same reach as pirated manga, but as Sophie Yanow noted of Brecht Evens, there was considerable interest in his art online prior to his 'discovery' by North American readers via Drawn and Quarterly's 2010 edition of The Wrong Place. As such, keeping in mind that few overnight sensations are not a few years in the making, here is another Flemish talent, painter and cartoonist Brecht Vandenbroucke, enjoying a similar D&Q debut subsequent to some comic/illustration work released as screenprints by Nobrow. A 9" x 12" hardcover album, its 64 dialogue-free pages depict a pair of pink-faced gentlemen as they accost the propriety of gallery art, fashion, architecture and more. Colorful, lumpen, hopefully funny. Preview; $22.95.

The Auteur #1: Oni Press is undoubtedly best known for the Scott Pilgrim line of original softcovers -- and not a few subsequent original softcovers from a wide variety of artists -- but they do still publish some comic book-format work, such as this new ongoing endeavor drawn by the very adept James Callahan of Barf Comics. Here he is colored by Luigi Anderson for a Rick Spears script about a movie producer on a burnout journey to find meaning in anything (I think). Looks gross! Preview; $3.99.

The Dumbest Idea Ever!: Jimmy Gownley has been working in what would eventually be deemed the YA comics area for a long while now via his Amelia Rules! series - initially self-published, and later picked up by Simon & Schuster. But there's a boom going on in these parts, and now the mighty Scholastic presents a 240-page slice of autobio, in which the artist relates efforts to put himself back together after a nasty illness in junior high, leading to a lifelong fascination with making comics. I'm told this story takes place about 80 miles from where I'm sitting right now, so in conjunction with Charles Forsman's Celebrated Summer (which I've unilaterally decided takes place in the Susquehanna Valley, based on the time it takes them to get to the beach) I'm just gonna announce the Golden Age of Pennsylvania Youth Comics right now; $11.99.

Gasoline Alley: The Complete Sundays Vol. 1 - 1920-1922: While not the 16" x 21" behemoth that was the 2007 Sunday Press Books edition of Sundays with Walt and Skeezix, this new 12" x 16" line of Dark Horse hardcovers promises a more systematic reprint of Frank King classics, starting at the very beginning and "using the original color proofs." Expect 128 pages, with a second volume due in July. Samples; $75.00.

Henry Speaks for Himself: I feel like I caught a little bit of the late run of Henry Sundays when I was a kid - those things continued until 2005, apparently, only one generation removed from Carl Anderson, the sexagenarian artist who debuted the mute, inquisitive, bald-headed title character via the Saturday Evening Post in the midst of the Depression. Anyway, this 160-page Fantagraphics softcover concerns itself with neither the Anderson originals nor Don Trachte's Sundays, but the mid-century Dell Comics iteration of the suddenly-no-longer-mute character by second-generation daily artist John Liney, "done in a Tintin-esque clean-line art style that made them attractive to the younger set, but with writing clever enough to cause the adults to chuckle while reading to their children," per the publisher. Edited by David Tosh, with an introduction by Kim Deitch. Samples; $24.99.

Thermae Romae Vol. 3 (of 3): Yesterday I noticed the announcement of a live event commemorating the 10th anniversary of Tsugumi Ohba's & Takeshi Obata's Death Note, which got me thinking about the boomlets of super-popularity contained by the outline of certain manga series - for a while, Death Note seemed like the biggest comic in the world, with all kinds of adaptations and spin-offs sprouting everywhere, and then its time passed. You could predict the same, perhaps, for this Mari Yamazaki series about the pleasure of baths, centered on a Roman architect specializing in baths, who travels through time to modern Japan and learns additional things about baths. The series ran from 2008 through 2013, with both an anime television series and a hugely successful live-action film debuting in 2012. A movie sequel is set to drop in Japanese theaters next month, and now Yen Press brings the last of their deluxe, 7" x 10.125" hardcover editions of the original manga to English. An extra-length 384 pages; $40.00.

The Simon & Kirby Library: Horror!: This is the latest among the Titan Books compilations of Joe Simon/Jack Kirby comics, a 320-page hardcover focused on ever-popular horror; $49.95.

Walt Kelly's Pogo: The Complete Dell Comics Vol. 1: Lot of Dell this week. This is a Hermes Press production - 272 pages of early material, reportedly including all of the Animal Comics outings for characters (interacting with humans at the time), as well as the complete Dell Four Color appearances; $49.99.

The Muppets Omnibus: Have I invoked the specter of licensed comics? Are they the real thing? Tangibly, this is indeed a 600-page brick of comics mostly written and drawn by Roger Langridge, initially for Boom! and later for Marvel, which is the entity responsible for this tome. Amy Mebberson also drew four issues in here, as well as some non-Langridge spinoff stuff which does not appear to be getting collected between these covers. I dunno how often we're gonna see this much Roger Langridge hitting the stands at once, maybe take a look; $59.99.

Moon Knight #1: Marvel continues to release little batches of new #1 issues, and usually there's something noteworthy out of every group. This, for example, is a new project from writer Warren Ellis, collaborating with artist Declan Shalvey on a project heavy with "mind-bending adventure" and "bizarre mysteries," as the solicitation puts it. I can't recall the last time I read a Moon Knight comic, but it looks like this one has the title character playing detective in a crisp white suit and some kind of fumetti neri mask, which brings to my mind a slightly older brand of spandex revivalism. Preview; $3.99.

Jupiter's Legacy #4: Speaking of which: you know who followed Ellis and Bryan Hitch on The Authority? Mark Millar & Frank Quitely. And you know who else has a superhero comic out this week? Preview; $2.99.

Starlight #1 (of 6): Ah, but but if there's any consensus about Millar, it's got to be re: his aptitude for attracting top-notch artistic collaborators. Here, for example, is the much-admired Goran Parlov, following up the Garth Ennis-written Fury: My War Gone By with this new Image miniseries, which has been described at various times as Flash Gorden meets The Dark Knight Returns and Buzz Lightyear in Unforgiven - who could choose? Apparently, this is *also* the first installment of a new shared universe of Millar-written books, which will subsequently include a collaboration with Duncan Fegredo, and supposedly over half a dozen other projects across the next three years. Parlov seems to be channeling Moebius circa Upon a Star in terms of environment, so the results might be ultra-pretty. Preview; $2.99.

Blighted Eye: Original Comic Art from the Glenn Bray Collection: Finally, your sort-of-a-comic for the week - a catalog of sorts, introducing the curious observer to the original art holdings of one Glenn Bray, who has spent 50 years amassing samples from magazine, newspaper and comic book cartoonists spanning much of the 20th century and beyond. Looks like a huge book: 410 pages at 10.5" x 12", including an interview with the collector. Fantagraphics is the publisher. Preview; $100.00.

Thank you once again for reading. Here is a Shōtarō Ishinomori drawing of Ronald Reagan walking through a ghost town. 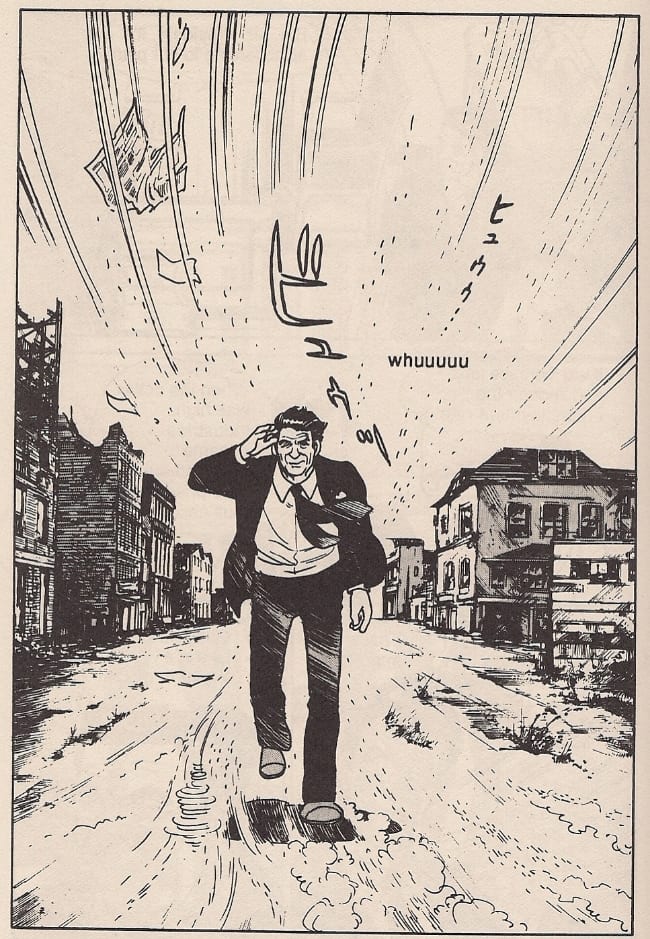 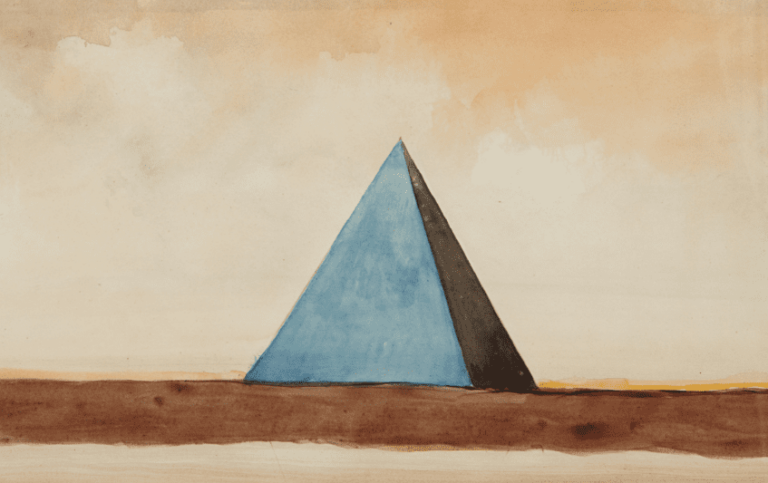