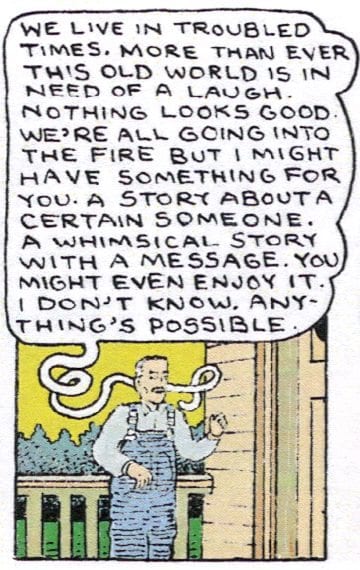 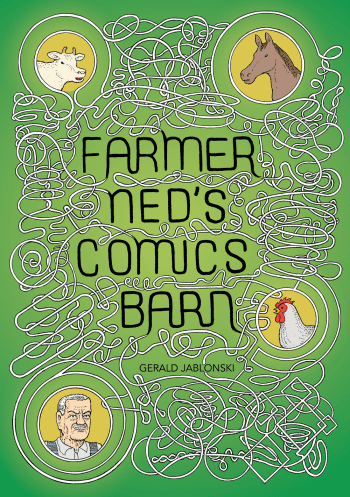 I'm not going to stand here like a jackass and claim that Jablonski is sitting on a hidden vein of mass appeal; this is very particular stuff, even though the artist does exploit the most fundamental, populist stuff of comics: formulaic gag strips. Every page in the Cryptic Wit series is a self-contained story, consisting of maybe 28-30 panels, with each panel typically filled halfway with voluminous dialogue. There are only ever three types of stories: (1) the schematic adventures of Howdy and Dee Dee, an uncle and nephew comedy pair who somehow always drift onto the topic of Dee Dee's teacher at school, who is an ant; (2) the Farmer Ned tales, in which the title character often spends an enormous amount of time winding you up as to the story he is planning to tell, only gradually yielding to fables about talking animals getting into trouble; (3) wordless, psychedelic barrages, depicting the eternal struggle between an angelic boy and a mutant counterpart, frequently to obscure ends.

The result is something extraordinarily bizarre - even more so for putting to use devices that are otherwise aggressively normal; it is impossible to read more than a few of these stories/pages in one sitting, and I recommend you treat them like scripture, as much for reflection as immediate edification. And yet, they are *incredibly* transfixing, often hugely funny comics, and this 9.5" x 13.5" Fantagraphics compilation promises to display Cryptic Wit at more engaging (or, readable) dimensions than ever before. A 100-page softcover, with an introduction by Jim Woodring and a new interview with the artist; $30.00. 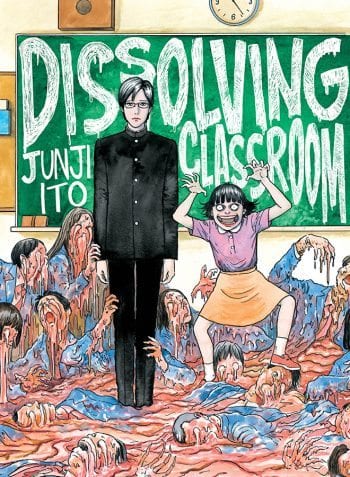 Dissolving Classroom: Veering away from VIZ's recent release of Junji Itō's Tomie stories -- works that date back to the very beginning of the horror manga icon's career in the late 1980s -- here we have Vertical with a translation of a much newer Itō release, hailing from 2013. As you might guess from the title, this finds the artist working more in the gross-out humor vein of his idol, the great Kazuo Umezu, though I've always found Itō to lack the rip-the-pages urgency of Umezu at his furious best; he's a more studied, cerebral artist, gifted at concocting small and sneaky shockers. Like Tomie, this 178-page book collects short stories linked by the presence of supernatural characters; there's some emphasis on social satire, like the tendency to remain polite amidst even the worst circumstances. Personally, I feel Itō's latter-day emphasis on tones in place of hatching has robbed his art of a not-inconsiderable amount of its scary impact, but drawing a huge number of bodies melting into goop, as is his passion here, perhaps flatters that smoother textural approach; $12.95.

Little Tulip: Your Eurocomic of the week is another release from Dover, continuing to explore the sort of books that Catalan Communcations might have put out decades ago. This 2014 album (8.25" x 11", 96 pages) reunites writer Jerome Charyn and artist François Boucq -- previously of The Magician's Wife (1986) and Billy Budd, KGB (1990) -- for an expansive-sounding story of tattoo art, life in the gulag, and murder on the streets of NYC in the 1970s. A very adept pair... Boucq in particular is the kind of full-bore craftsman who can credibly draw anything with weight and conviction; $14.95.

Lighthouse: Being the new translation of work by Spanish cartoonist Paco Roca, an artist "at the crest of a true-to-life wave in contemporary Spanish comics," per Morten Harper, who profiled Roca for the Journal a few years back. This is an early work, from 2004, concerning a teen combatant in the Spanish Civil War holed up in the titular structure with an older man prone to spinning tales. A 6" x 9", 64-page hardcover from NBM, probably being advertised somewhere off to one side of this page right now. Preview; $15.99.

Poorcraft: Speaking of valuable information, this 168-page Iron Circus release from writer/publisher C. Spike Trotman and artist Diana Nock vows to aid you with "everything from finding a home to finding a hobby, dinner to debt relief, education to entertainment," all on an extremely tight budget - certainly a skill set indie cartoonists build over the years, along with more and more of this country; $10.00.

Not Waving But Drawing: Another new Fantagraphics release, this time a deluxe softcover (10" x 11", 64-page) collection of sketchbook gag cartoons ("dark thoughts, lightly rendered" purrs the subtitle) by the noted illustrator John Cuneo. Full-frontal nudity on the cover, gang, you know he's going for it; $25.00.

Judge Dredd: The Complete Brendan McCarthy: Not a Rebellion release or a North American repackaging of such, but one of IDW's irregular 9.25" x 12" hardcover tomes where they collect everything an artist has done on the long-running Judge Dredd SF/action strip without concern for storytelling flow - if an artist only drew three of eight chapters of a storyline, you get those three chapters only. Weighing in at 200 pages, this one is dedicated to Brendan McCarthy, whose work on the strip dates back to 1978, nearly its beginning; $49.99.

Lightrunner (&) Seekers Into the Mystery: Two more from Dover, this time delving into the publisher's unofficial mission to disinter odd artifacts from the history of the American Direct Market. Lightrunner is a real obscurity, a 1983 space opera from writer Lamar Waldron and penciller Rod Whigham, the latter a well-traveled commercial comics artist (he now draws the Gil Thorpe newspaper strip) and assistant to Bob Burden, whose earliest Flaming Carrot stories I believe Waldron published in his capacity as an organizer of the Atlanta Fantasy Fair and an editor of its official magazine, Visions. Anyway, Lightrunner was first published as a book in 1983 by Starblaze Graphics, which is probably better known today (if at all) for the legal troubles it got into with various artists; now it is available again in a 128-page edition. Seekers Into the Mystery was a 1996-97 Vertigo series from writer J.M. Dematteis and a rotating crew of artists, among them Glenn L. Barr, Jon J. Muth, Michael Zulli and Jill Thompson. The plot looks to have something to do with astral projection, repressed memories of abuse, celestial beings - honestly, I'd completely forgotten it was ever published, but all 400 pages of it are now available again; $19.95 (Lightrunner), $34.95 (Mystery).

Chester 5000 Vol. 2: Isabelle And George (&) You Might Be an Artist If...: And here's two from Top Shelf, operating under the IDW umbrella but still releasing books that feel very much like 'Top Shelf' works. Chester 5000 is the popular erotic webcomic SF romance series from Jess Fink, here coming off the back of a successful Kickstarter campaign to put together a hardcover edition for a prequel storyline. You Might Be an Artist If... is a 144-page collection of comics by Lauren Purje about life in the 'fine' arts world, rendered in a very smooth-lined style a bit reminiscent of Megan Kelso; $14.95 (Chester), $19.99 (Artist).

America's Best Comics - Artist's Edition: Finally, we return to IDW proper and their popular line of gigantic original art reproductions, here organized not around a single vision, but a whole line of comics. Ironically, what unified the America's Best Comics line (a subsidiary of Wildstorm, as acquired by DC) since its 1999 debut was the presence of writer Alan Moore, whose contributions can't help but be downplayed a bit with so much emphasis on drawing. Expect a potpourri of stories by the many attractive artists retained for those titles, including full issues of Promethea (#10, J.H. Williams III & Mick Gray) and Top Ten (#7, Gene Ha & Zander Cannon), along with short stories drawn by Chris Sprouse & Karl Story, Rick Veitch, Kevin Nowlan and Hilary Barta. A 12" x 17", 216-page production; $146.99 (or so). 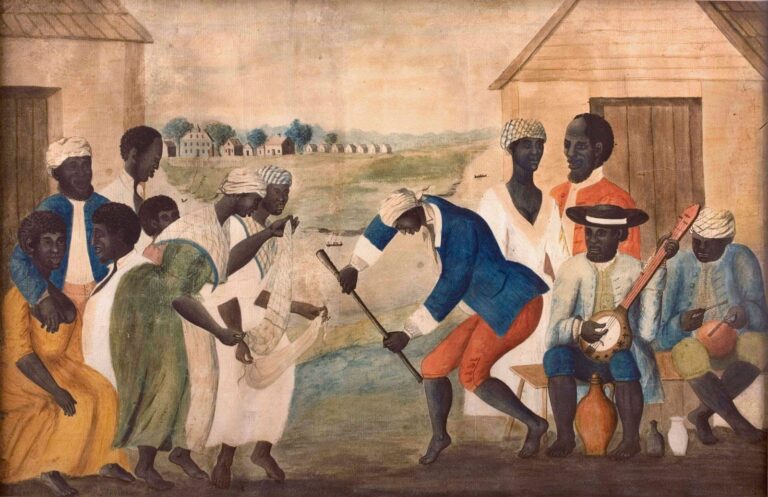 Unless the Paper Sows the Seed 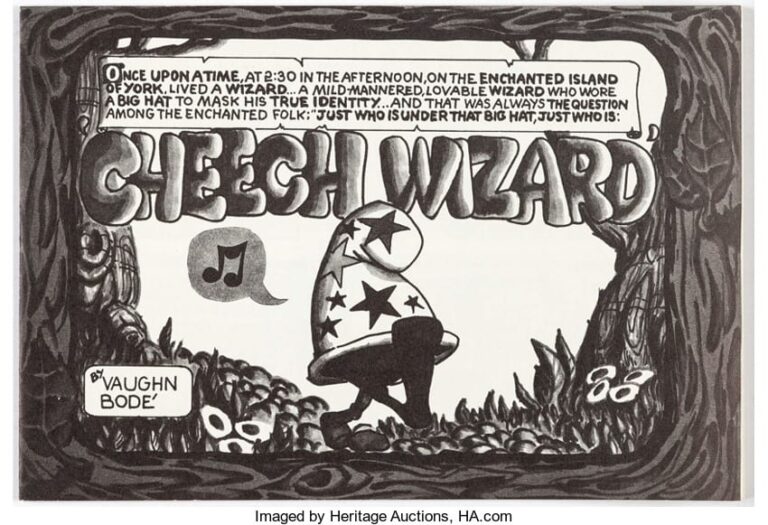