Chris Baldwin is one of the grand old men of webcomics, because webcomics are young enough that you can be a grand old man and still have all your hair. His strip Bruno launched in 1996, part of the Internet’s first wave of successful continuity comic strips: Steve Troop’s Melonpool, Pete Abrams’ Sluggy Freelance, Darren Bluel’s Nukees, and Bil Holbrook’s Kevin and Kell (the earliest of the lot) all began around the same time. He’s been drawing webcomics ever since, sometimes more than one at a time. Each is radically different, and none cover typical webcomics territory.

But of all the major webcartoonists, Baldwin is perhaps the least stereotypically webcomicky. He doesn’t do geek humor or pop-cult references or random Pythonian wackiness. He draws in old-school pen and ink, deploying the crowquill and brush techniques most digital cartoonists never bother to learn. Only in his most recent comic, Spacetrawler, has he made the leap to digital color. He even hand-letters, for goodness sake. Who, in this century, letters by hand? Besides me?

Bruno, Baldwin’s debut, is the introspective, meandering saga of a depression-prone twenty-something writer and her bohemian friends. A typical Bruno strip consists of a single long panel of characters talking over coffee, sprouting a half-dozen word balloons crammed with conversations about philosophy, sex, wine, and cognitive behavioral therapy. Beyond Bruno’s circular quest for fulfillment, there’s virtually no plot to speak of, to the point that in one sequence Bruno climbs out of the strip, demands that Baldwin make something happen, then hangs out in his apartment for several weeks. In the mid-1990s, an era of webcomics based on Star Trek and anime references, Bruno stood apart, the cutting-prone hipster in a crowd of AV club geeks.

In 2004, while still drawing Bruno, Baldwin launched a second ongoing strip. By this time, most of the up-and-comers in webcomics were either drawing gaming comics (nearly all of them copies of Jerry Holkins’ and Mike Krahulik’s phenomenally popular Penny Arcade) or stand-alone gag strips that people could e-mail around to their friends (Ryan North’s Dinosaur Comics, Randall Monroe’s xkcd, Nicholas Gurewitch’s The Perry Bible Fellowship). So of course Baldwin unveiled Little Dee, a kid-friendly, newspaper-appropriate four-panel about a mute little girl adopted by a group of forest animals.

Gently funny, warmly absurdist, and cute to a fault, Little Dee’s whimsical plot lines about seasonal celebrations and trips to the donut shop sound nothing like Bruno. They don’t look like it, either, replacing Bruno’s slightly cartoonified naturalism with simple, iconic character designs. In place of the earlier strip’s dark, obsessive crosshatching, Dee is inked in thick brushstrokes and shaded with screentone. Who even uses screentone these days? Besides me?

Baldwin’s third comic, the long-form, twice-weekly Spacetrawler, launched on January 1, 2010 and is my favorite of his comics so far. It’s also the first of his strips with a hint of webcomicky geekiness, thanks to the sci-fi setting, and the first with a strong, structured plot. The premise, in a nutshell: Six humans from around the world are abducted by the Starbanger, a spaceship piloted by the activist organization Interstellar Amity. The group’s mission: to free the Eebs, powerful but docile aliens enslaved by the rest of the galaxy.

All six humans were chosen for the likelihood that they would go along with IA’s plan, but otherwise they don’t have the most useful skill sets for the job (or do they?): one drinks and screws his way across the galaxy, one sees space travel as an opportunity to indulge all her anime-inspired fantasies, one was literally raised by coyotes, and one was abducted by accident. 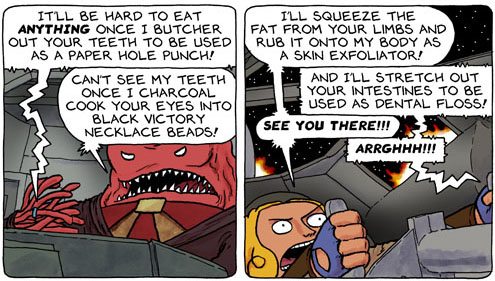 As the abductees travel from planet to planet, battle space mercenaries, and learn the game of galactic politics, the plot sprouts further complications, and it develops that the humans may have landed on the wrong side of the Eeb liberation movement. Over the two years Spacetrawler has been running, the characters have evolved quietly but remarkably, especially central protagonist Martina, who goes from timid Uruguayan college student to no-nonsense (but secretly softhearted) captain of the Starbanger. All this takes place against the backdrop of outlandish space opera and ray-gun-based comedy one expects from a sci-fi comic, more or less.

Baldwin’s art has changed again for this project: the human characters are realistic but simplified, the aliens have some of the cute abstraction of the characters in Little Dee, and the backgrounds—spaceship interiors, alien landscapes, stars and planets hovering in space—are nicely detailed. Also: color!

Reading Spacetrawler, I’m constantly struck by how different it is from Bruno and Little Dee.  But the same themes run through all three comics: the need for friends and community, the difficulty of dealing with the casual cruelties of life, the reassurance of nature (even if it sometimes means lying in alien grass to gaze at unfamiliar stars), the ache of old psychological scars on a cold night. There’s a core sweetness and humanity to Baldwin’s work that’s rare in webcomics; his characters are basically decent, no matter how seldom they manage to do the right thing. And they’re funny. And they drink a lot. 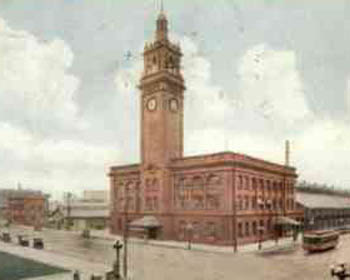 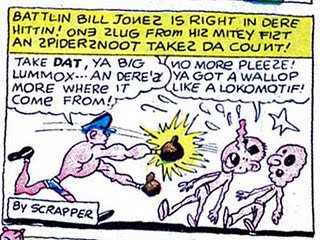