The Everyday Aesthetics of Warren Craghead 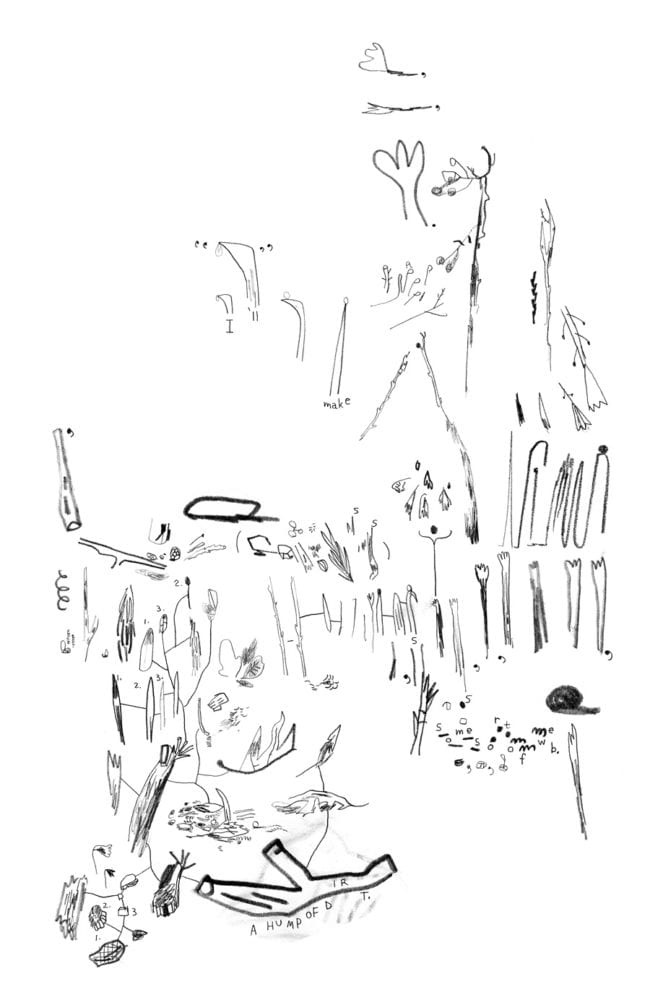 For "Backyard", Warren Craghead "sowed,” i.e., collaged, various drawings of numerous organisms, objects, and experiences in his backyard with a multitude of styles. There are flowers, plants, “bug[s],“ “animals and habits,” and sunshine, as well as “a hump of dirt,” “straws,” “some coal from an old molt,” “smoke,” and “one man’s pit.” "Backyard" has both the beautiful and the ugly, the natural and the artificial. Their coexistence creates euphony. "Backyard" is a “paradise” where “you can find everything.” Craghead finds diversity and beauty in the small, mundane, and ephemeral, even in “sorts of dust.”

You discover traces of human lives only when you examine "Backyard" thoroughly. There are “straws,” “smoke,” “tubes,” and “combs” as well as a hint of a house, cars, windows, and even furniture inside the home. We hear a “whistle,” “fan sound,” “a song on loop,” and “some chatter.” In "Backyard", humans share the ecosystem with other species. But they are not intrusive. 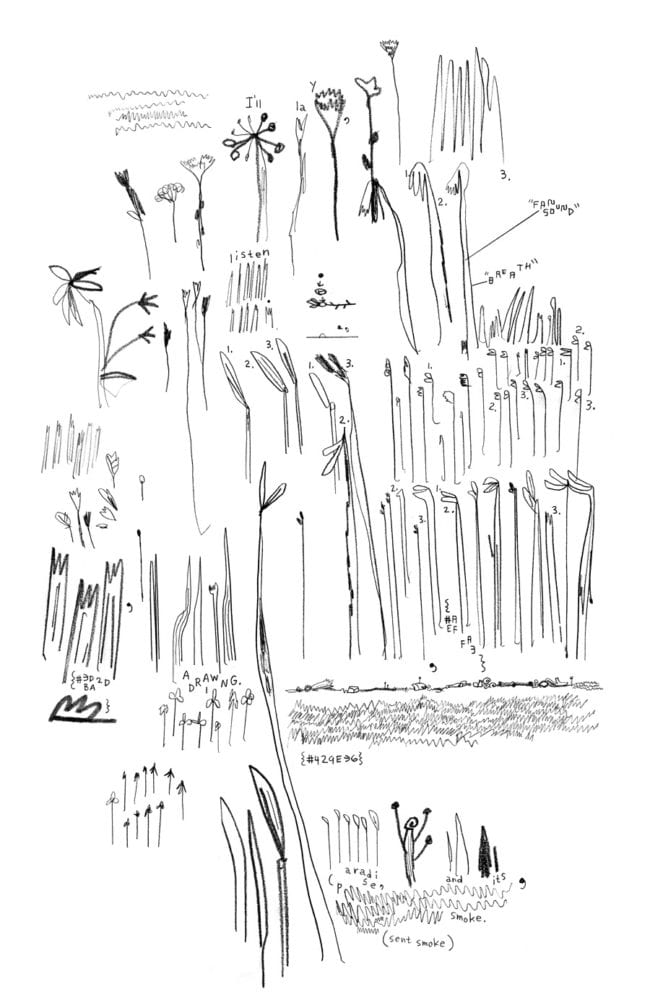 Letters including punctuation marks and images are scattered across all over the page just like creatures and things are in "Backyard". Words are drawn, rather than written. To apprehend "Backyard", you need to “comb” through the “web” of words and drawings on the newspaper sheet sized page. The act of reading is physically analogous to sifting through a back yard.

And this is where touch, the second most crucial sense in comics, comes in. At the gallery, we glance at the artwork on the wall in the distance. In contrast, we physically touch and hold the comic. We can examine it more closely, thoroughly, and longer in any way we want. We can “listen” carefully to what the artwork says in private.

This accessibility and intimacy of art is what Craghead strives for in his oeuvre. It is no surprise (and I am grateful) that Warren Craghead makes comics.

Risograph's Grain as Leitmotif in Sable by Alexis Beauclair

The rise of Risograph is one of the biggest developments in international small-press comics/zine communities over the last decade. Alexis Beauclair’s Sable (2014) studies and exploits Risograph’s natural grain/noise/halftone features. In addition to his artistic practice, Beauclair has run a Risograph printer (Papier Machine) with Bettina Henni since 2012. All of his self-published works to date have been immaculate — which is extremely hard to do in Risograph. 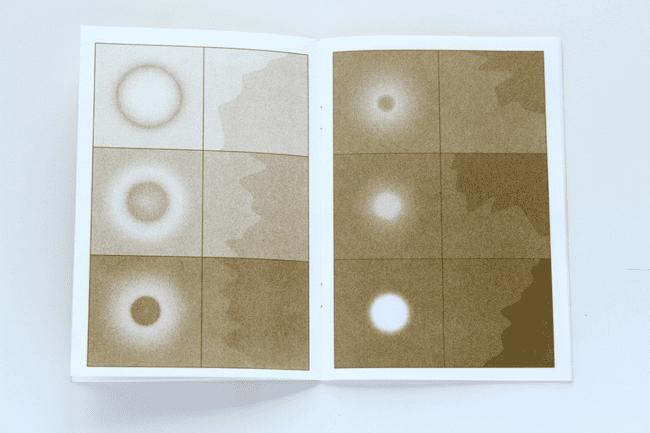 In Sable, the very grain of Risography is analogous sand, molecules that make the dispersion of the sky, and the mirage in the desert.

In a spread that shows the power of both the Risograph and comics, Sable shows the passage of time and only with the change with the density of dots (grains) of Risograph which translates into the difference of the tone. Moreover, as time passes, the depicted objects are altered: the corona of the sun becomes the moon, dunes become clouds, and clouds become leaves, again only noticeable by the change of the density of dots. The variation of Risograph dots reshapes the representation completely. 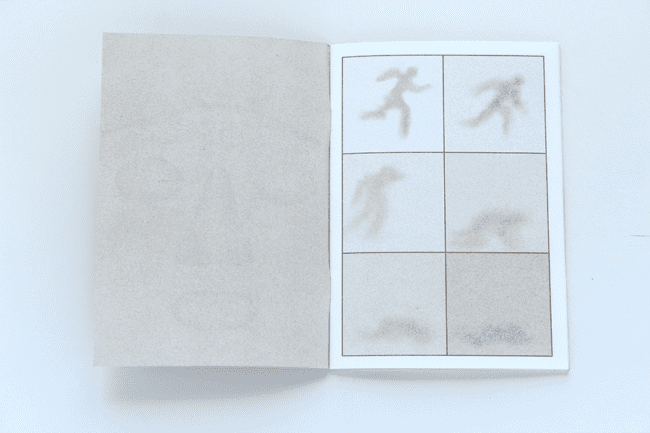 On the first page, the tone of the background gets darker, causing the silhouette to begin disappearing. This silhouette falls into the desert, and it becomes harder to distinguish the silhouette from the background. This progression has several possible meanings: the storm might be getting more intense, our (and/or the character’s) perception might be getting worse, or the heat might be increasing. Everything looks hazy. Distinguishing the sky and sand is impossible. This might be due to a thick sand storm, or perhaps it is a mirage. There are no lines to define precise boundaries in Risography, and Beauclair uses this to show that our perception is not perfect.

On the final pages, we see ourselves — via a human face – appear in the natural world. But on the next page, it is revealed that these are mere blobs of sands. We see mirages again. We tend to (mis)read human faces from random shapes, just as we read comics from distributions of Risography dots. 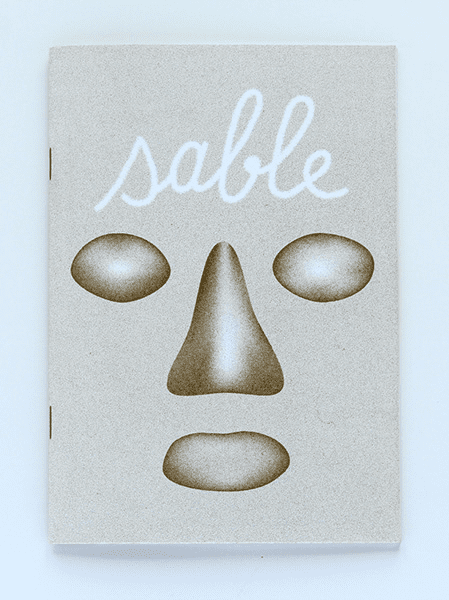 Materiality of the Inexpressible: Ambient Air by Erin Curry 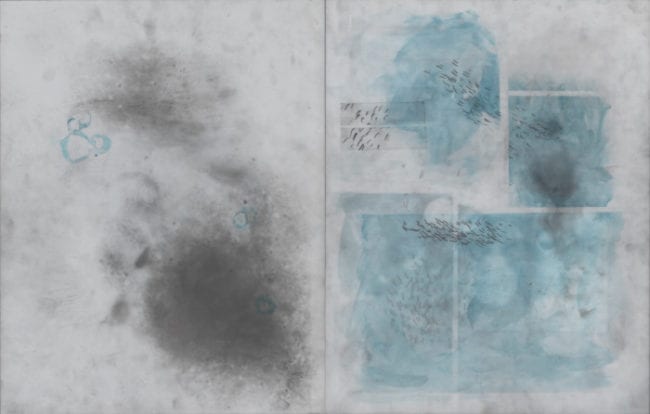 Ambient Air (2012) shows the inexpressibility of human communication employing the structure of comics and the materiality of translucent Mylar.

Pages of Ambient Air recall the layout of comics. There are grids, panels, speech bubbles, and writings. However, we cannot read Ambient Air. Words are whited out or asemic. They are more like traces of writing that once existed.

Besides, Ambient Air uses translucent Mylar as its "paper." The reader’s perception and understanding of each page are always influenced and deterred by the previous and subsequent pages.

This unreadable comic is the perfect analogy of how we perceive and communicate with the world around us including each other: the memory of the past and the expectation of the future affect our present experience just as translucent Mylar layers, and we cannot comprehend everything that is spoken or written even though we try.

We assume our lives are like well-written novels with straight narratives. However, it is more like Ambient Air: a blurred and layered sum of hazy images. 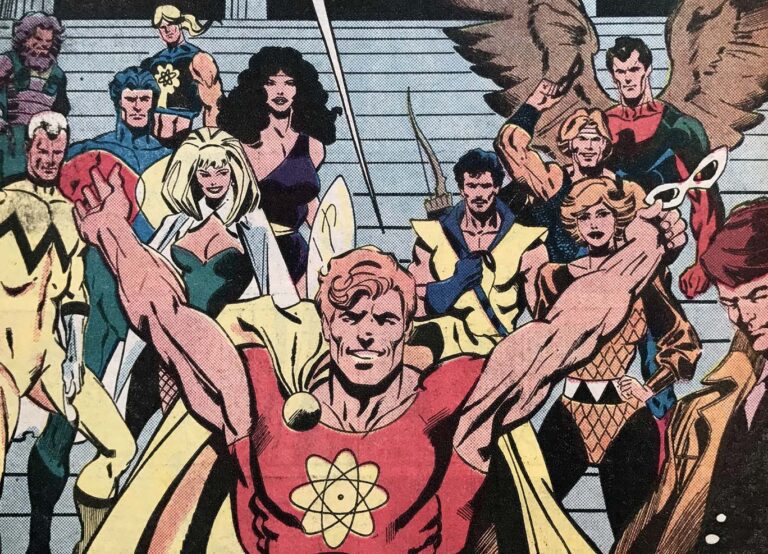 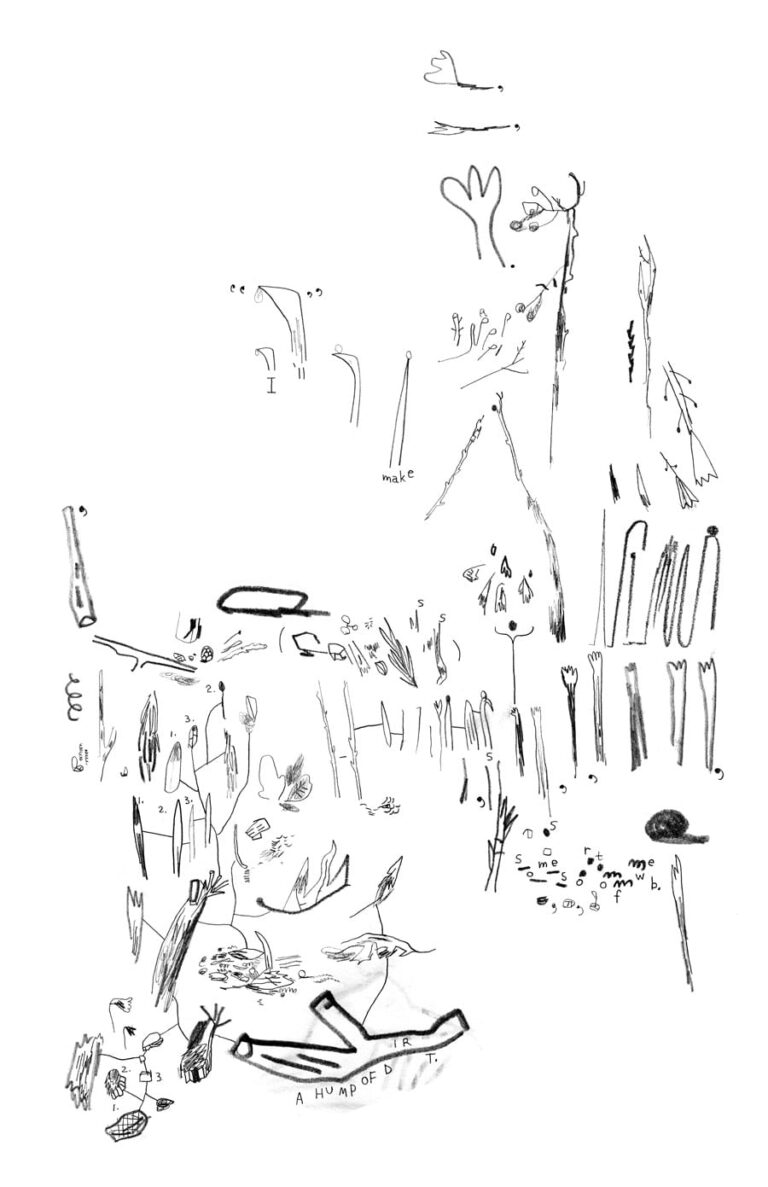