Good morning. Today we introduce a new occasional column from Paul Tumey, "Framed!" In the first installment, "The Lost Comics of Jack Cole", Tumey tackles Cole's very early years, after explaining why the exercise is necessary:

When he was in high school, Cole would quietly sneak into his family’s kitchen in the middle of the night where he would assemble and wrap a sandwich for his school lunch the next day. Back in his room, he would hide the sandwich inside a hollowed out book.

His boyhood room contained cabinets Cole – a sort of small town Buster Keaton -- built, complete with hidden compartments. One of these compartments held electronic gear Cole had assembled that allowed him to eavesdrop without detection on his family’s telephone calls. Much like his 1940-41 comic book character, Dickie Dean, a boy inventor (who lived in New Castle, Pennsylvania, Cole's hometown), the young Jack Cole was endlessly resourceful.

Smuggling a sandwich to school allowed Cole to secretly save his lunch money to invest in his passion: cartooning. Cole eventually saved up enough quarters and dimes to buy correspondence courses from the Landon School of Cartooning -- courses that his father, a small business owner, had refused to subsidize.

A career born from such stubborn resourcefulness and playful secrecy is bound to hold some surprises. Over half a century after Jack Cole’s life abruptly ended, we are still discovering his secrets.

[...]
A study of Cole’s lesser-known –and mostly forgotten – comics and cartoons sheds light on his greatest work, his Plastic Man stories and Playboy cartoons. It also reshapes in fun, manic Plastic Man fashion our current narrow understanding of this secretive, influential 20th century pop artist who was never interviewed, never profiled in his lifetime, and rarely even photographed.

—Tom Spurgeon has written the most thorough obituary of Kim Thompson to appear yet. You ought to read it.

—The Daniel Clowes MCA show in Chicago has gotten more coverage, in the Chicago Tribune (with another look at Clowes's Chicago landscape I linked to last week, only with newer, more in-depth annotations), and a review from Noah Berlatsky in the Chicago Reader, and gets in an argument in the comments with a representative of Pigeon Press.

—I missed Ted Rall's recent column announcing the death of editorial cartooning after before the Association of American Editorial Cartoonists convention. Matt Bors, a young cartoonist mentioned in Rall's column, wrote about the same AAEC event, including a great Pat Oliphant anecdote. Then Tom Spurgeon interviewed Bors yesterday, which I haven't read yet, but it's top of my list for today.

—Box Brown talked to the Beat about changes at Retrofit Comics.

—The Guardian has an interview in comics form with the family behind The Phoenix.

—Not (exactly) comics: The Splitsider tells the story of the National Lampoon magazine.

—Not comics at all, except tangentially. Last week, a woman claimed that she was sexually harassed at a science-fiction convention by a prominent member of that community, and chronicled what happened when she tried to report him. The post went viral, which led to further developments. Seeing as comics is similarly dependent on a convention culture, this seemed worthy of note. 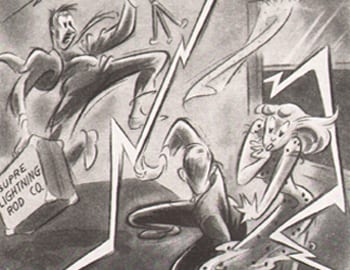 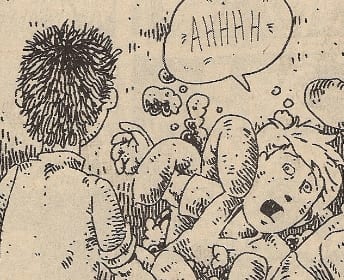