Well, I'm back from the wilds of Maine, and it seems like the site is more or less intact. I guess I missed another comments-thread tempest, but, without having had time to really look at the discussion closely, the arguments seem somehow less inherently divisive (with some obvious exceptions) and more like talking past each other (with other obvious exceptions). It would take more time and thought and close attention to respond as fully as I probably should, but the main issue at hand isn't going anywhere, and will and should be addressed on this site in the future. The overwhelmingly white demographics of North American independent comics creators, when mixed with a very strong tradition of intensely personal comics in which many of the most celebrated works deal in provocation and even deliberate rudeness, unsurprisingly leads to various artistic and social tensions, possibly irresolvable. One reason for hope might be found in noting how the typical depiction of women has changed in comics since the heyday of the undergrounds—sexism is clearly still a live issue, but things aren't what they used to be, and I have no doubt that the increased and increasing prevalence of female creators [and readers, editors, publishers, etc.] is a big part of that. Anyway, complicated issues here, and ones that likely aren't going away any time soon, with or without deliberate action—but deliberation rarely hurts.

Joe McCulloch is here, as he is every Tuesday morning, with his indispensable weekly report on the most interesting-looking new titles available in direct-market stores.

After having spent a week without access to the internet, I am way behind on links, but here are a few I noticed while I am catching up:

—Hayao Miyazaki has announced his retirement from feature film-making. His Nausicaä of the Vally of the Wind still seems to be to be one of the great achievements in comics.

—Jeet Heer's In Love with Art: Françoise Mouly’s Adventures in Comics with Art Spiegelman is previewed by Anne Kingston at Maclean's.

—The Seattle Weekly has a short profile of Fantagraphics.

—Kyle Baker has launched an online comic strip, and Derf has taken his long-running The City to the web.

—I liked this Frank Santoro post on changing tastes.

—Saga continues its streak by taking home the Hugo.

—The important and influential science-fiction writer and editor Frederik Pohl has passed away at 93. Christopher Priest at The Guardian has an obituary.

—Dash Shaw speaks to the California College of the Arts: 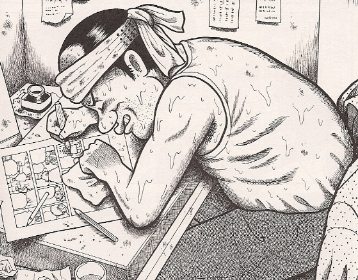 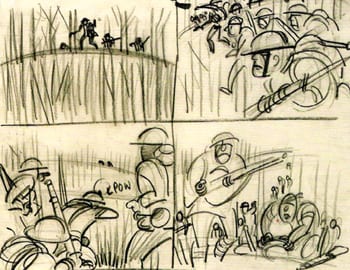 The Anti-War Comics of Harvey Kurtzman