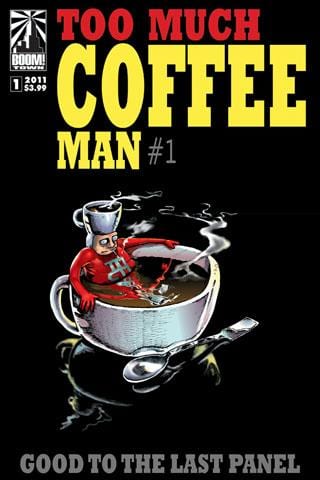 Too Much Coffee Man #1 (Facsimile Edition)

This facsimile edition reprints Too Much Coffee Man issue 1, from 1993.

It includes TMCM's usual ration of pure silliness, alongside social commentary, philosophical rumination, and meta-comic self-referentiality. It features a rambling, and ultimately pointless, story about copyright, a probably real-life portrayal of the process of making and selling mini-comics (moral: "There's no substitute for hard work. Except good connections. And money. And luck."), and a surprisingly poignant story about a break-up. It then closes with short strips about complaining (and complaining about complaining), the pains of working a service job, and comic writers who write comics about writing comics. This being a facsimile edition, we also get to see the ads, the letters page, and other artists' renditions of Too Much Coffee Man. (Kieron Dwyer's "Many Moods of Not-Enough-Coffee-Man" is particularly amusing.)

There are hints, here and there, of Shannon Wheeler's later genius. But nothing in this issue displays his talent for hilarious insight the way his more recent work does -- or, for that matter, the way his work of the later '90s did. It's clear in this issue that Wheeler was still figuring out his approach -- to the art, to storytelling, to humor, to his subject matter. He seems to have perfected, early on, Too Much Coffee Man's rubbery, expressive physicality, his existential anxiety, and his irrational-but-somehow-salient leaps of logic. What he has not worked out, though, is how to use these elements to sustain a story.

Wheeler succeeds better with the one-page gag strips and, interestingly, does pretty well with the book's two more realistic stories. The break-up story, especially, is well-written, with careful pacing, natural-sounding dialogue, a compelling plot, and a strong finish. Unfortunately the art is not of the same quality. It's probably wise that for this piece Wheeler backed away from his usual bulging-eyes, caricature style, but in contrast the more realistic art seems dull and a little amateurish.

Perhaps the best pairing of art and story is the short piece about producing mini-comics. Wheeler's doppelganger is monstrous -- with a square head, bug eyes, and a giant, jagged, protruding underbite. The other people are fairly normal looking by comparison. The result, in terms of characterization, is two-fold. On the one hand, Wheeler seems awkward and out of place, self-conscious and ridiculous. He embodies a feeling of inadequacy. On the other hand, the clerk at the comic shop, and the customers there, are not served well by their normalcy: they come across as clueless, shallow, arrogant, and boring. I'm sure more than one artist has suffered this ambivalence, but I've never seen it portrayed in quite this way, at once both obvious and subtle.

Beyond the inherent interest of the stories and art, and aside from all the development-of-the-artist stuff, Too Much Coffee Man #1 is mostly interesting as an artifact of its time. It's hard to pin down exactly, but there is something about these comics that just feels like the '90s. It serves as a document of the Slacker era -- the ironic self-referentiality, the d.i.y. marginality, the McJob economy, and to help us through it all, the coffee. 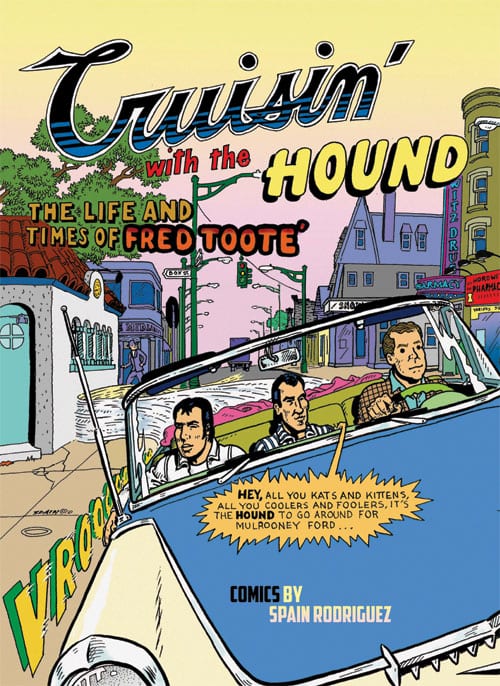 Cruisin’ with the Hound: The Life and Times of Fred Toote’ 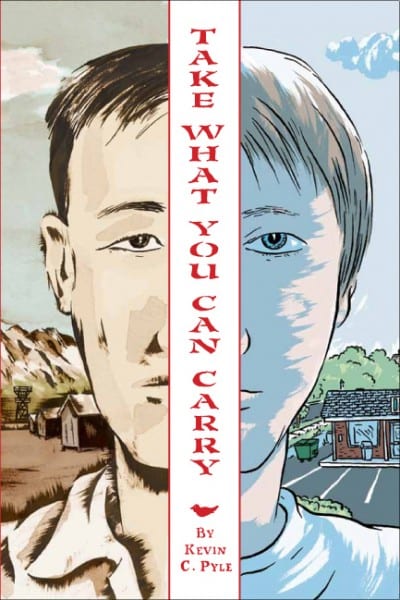