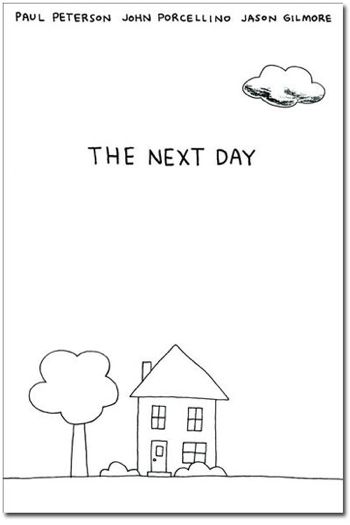 By its very nature, as both a work of art and a piece of instructional/inspirational literature, The Next Day walks a fine line. It's a series of interviews with four people who survived suicide attempts, each of whom provide details on what brought them to the brink of taking their own lives, and what has happened since. This obviously delicate subject presents many risks, depending upon how it is depicted visually. A naturalistic style of art could veer into exploitation, whereas a more expressionistic style could easily become mawkish. One person who could do justice to these stories and navigate their storytelling perils is John Porcellino.

The book was written by Paul Peterson and Jason Gilmore, who based their script on the aforementioned interviews.The Next Day is structured to flip between each of the subjects, as each person is in roughly the same emotional state. This was done in lieu of telling each story one person at a time, most likely as a way of drawing together these thematic and emotional threads. It's a strategy that bears fruit in terms of the punch of its eventual emotional payoff but also leads to some confusion in piecing together narratives. Porcellino had a number of problems to solve in this book. He had to find a way, using his simple character design, to give each narrative a distinctive look. He had to find a way to to lay out a lot of information without suffocating the reader. And he had to find a way to walk the line between making a story exciting and exploiting potentially sensationalistic material.

The resulting book is mostly successful. The key words that describe Porcellino's approach are rhythm and restraint. For each character's narrative, he sets up a 2x3-panel grid. The name of each character is placed in the bottom right-hand corner of each page so as to quickly identify them (though Porcellino is also careful to give each a distinctive set of qualities). Each subject has their own font to help further differentiate their stories, which tends to help more when their through-line is looked back at than on a straight read-through. Indeed, this book defies such a reading because it's so easy to lose details of each subject's thread. Many of those details are crucial in understanding the choices the subjects made—the middle of the book is particularly affected. I found myself flipping back and forth in order to keep certain details in mind. By the end, there's so much forward momentum that this became less of an issue. 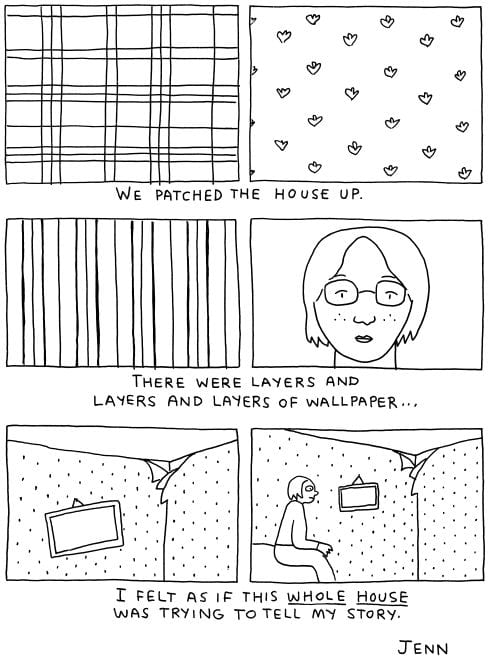 Each section deals with a different aspect of each subject's story. It begins with "The Day Of", as we see each person's suicide attempt, depicted with just a handful of lines. This demonstrates Porcellino's restraint, as we get just enough information to understand what's going on. The approach establishes just what this book is about but also divorces the concept of suicide from the experience of a particular person or persons in a deliberate manner. That's part of the book's trajectory from the general to the specific, personalizing depression and pain as part of someone's story and reconnecting those images of attempted suicide with people that we've gotten to know through their own words.

The bulk of the book consists of "The Days Before", broken up into multiple chapters. Each chapter ends with a three- or four-panel page, with each panel spread out across the page horizontally. Porcellino does this to break up the rhythm of the anecdotes, and draws a landscape that gets cloudier and cloudier until it starts to rain and finally storm. It's a simple and eloquent way of depicting the increasingly cloudy emotional states of each person as they delve deeper into their pasts. When the reader reaches the stage of the book where we're finally caught up with each person's decision to kill themselves, the chapter ends with a single panel of a thunderstorm over the house that we've seen repeatedly in chapter after chapter (the house being a clear metaphor for life), and then flips to an all-black page with a few thunderbolts on it. We then see a white "flatline" on a black page that jumps back to life when Porcellino segues into "The Next Day", with the page flipping back to white and ECG upticks turning into grass as we see the house once again. It's an obvious but understated visual that works. 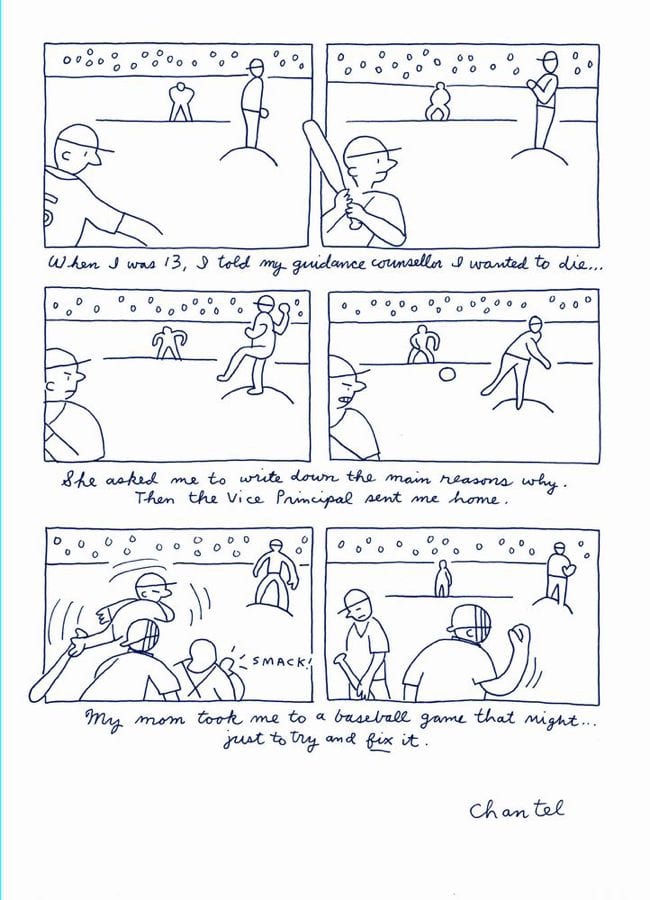 Again, Porcellino's overall restraint makes this device effective, and he is careful not to clutter up most of the pages with tricks. While the segues to the gathering clouds act as emotional mirrors, they also provide a much-needed bit of breathing room. One thing the narrative makes clear is that suicide is an act with deep roots and causes. Unsurprisingly, two of the three women interviewed were sexually abused at a very young age and for an extended period of time. The lone man in the quartet came from a broken home; this was not the sole cause of his mental illness but it certainly made it worse from an early age. Even as children, their lives were filled with anger, fear, self-loathing, and self-destructive behavior. What was most bracing about these stories is that in several cases, the subjects appealed to their family for help but got recriminations or apathy in return. It's clear that one of the goals of the book is to discuss mental illness and suicide openly, instead of hiding it behind a curtain of shame.

When the reader finally reaches "The Next Day", there's no easy happy ending or resolutions. In the examples of Jenn and Chantel, the two women who were abused, they were able to get better and create new lives. Jenn even became a wife, mother, and ER nurse who frequently deals with attempted suicide cases. Ryan, whose bipolar disorder is far more severe, has to live with the reality that he has a disease that requires constant care to keep under control. Tina, a depressive from a very young age, understands that her therapy and medication make her better but that she still requires the occasional day to retreat from the world. The final image of the book mirrors the first image we see: the four subjects standing in front of a house in profile, their life stories waiting to unfold. The image is the same, but the context has completely changed, another neat trick of Porcellino's that allows him to express a message of hope with a subtle visual rather than rely on text that might border on platitude. This juxtaposition is one that has defined Porcellino's own work as an artist, making him the ideal choice for this project. 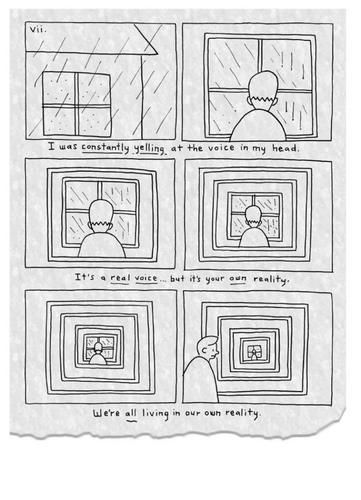 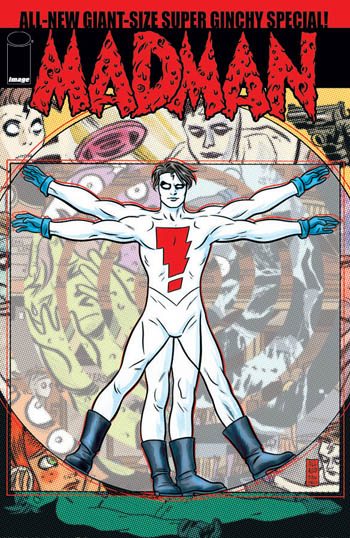 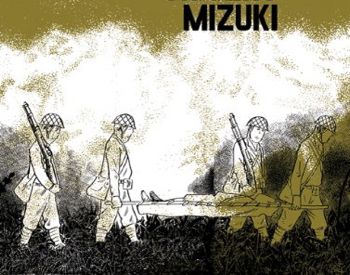 Onward Towards Our Noble Deaths