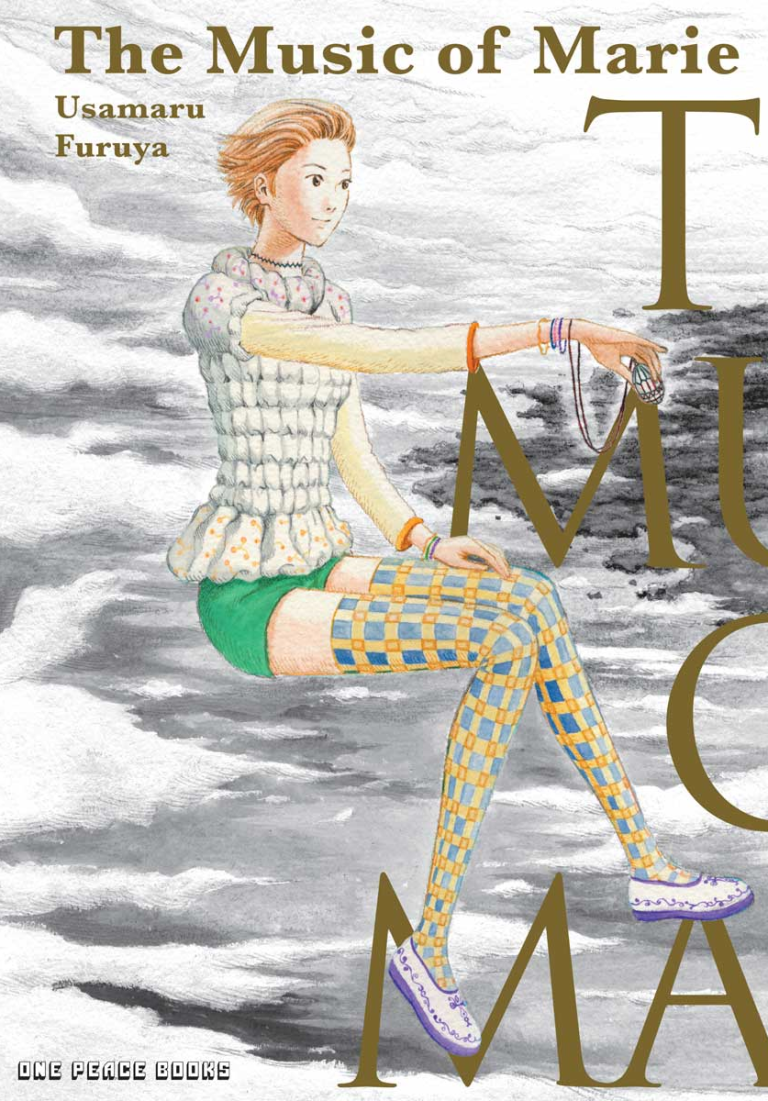 If there’s anything Usamaru Furuya loves, it’s cute, trendy girls. It would be critical vanity to reduce Furuya, a versatile craftsman whose long career crosses contexts and demographics, to one theme or fixation, but his first decade spirals aggressively on a motif of the popular girls–kogals, dropouts in sailor suits, young sex workers, the feminine at her most despicably desirable and shallow–juxtaposed with power and significance. With his fine art-trained hand, Furuya enthrones the gals in a seat of cosmic power that displaces all art history - gals run amok through every chapter of the western canon, gals displace iconic manga characters from Maetel to Golgo 13, every breath of existence is rewritten by the ruling presence of airheaded bimbos. The cover of Palepoli, his semi-underground debut gag manga from 1996, depicts a dramatic, almost biblical landscape, reminiscent of early perspective paintings, with a colossal, winged girl in the foreground clutching a teddy bear. Although a 2003 commercial follow-up, Short Cuts, is more explicit with its focus on kogals, this cover makes the theme explicit - god is a woman, she is superficial as all hell, and incredibly strange men are obsessed with her. 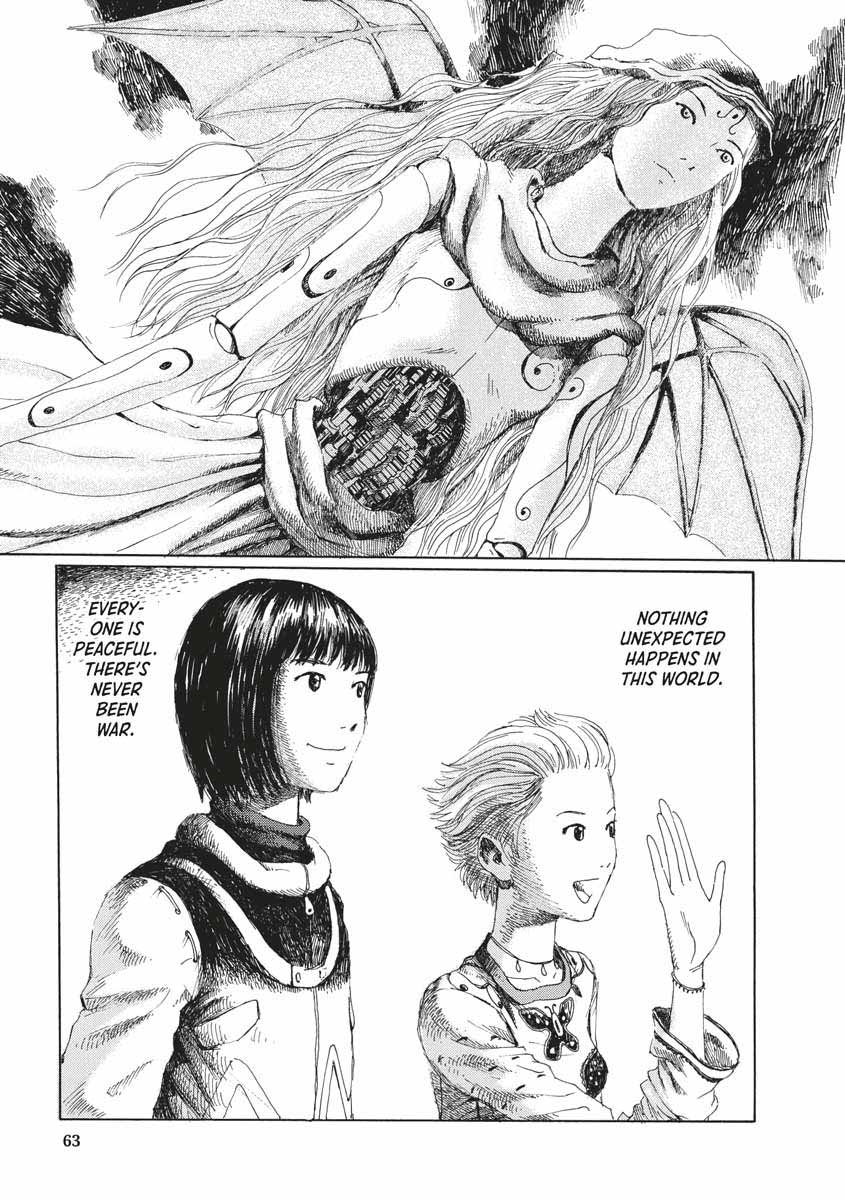 First published in Japan in 2001, The Music of Marie is a longform departure from the gag comics and countercultural short pieces that comprise Furuya’s early works, burrowing deeper into this core fixation and expanding Furuya’s favorite joke to span a society. Like many of his gag strips, there are visual precursors - the manga’s post-calamity, post-industrial agrarian society has more than a hint of Hayao Miyazaki’s Nausicaä of the Valley of the Wind, with a little Moebius and No. 5-era Taiyō Matsumoto sprinkled in for good measure. Yet something current and trendy has snuck into the familiar aftermath fantasy, the denizens of this de-modernized society clad jarringly in DIY Harajuku-flavored fashion straight out of the pages of FRUiTS. Above this strange and vivid place, a divine mechanism hangs in the air - Marie, the guardian of the land, the barrier to the heavens, made in the image of a girl so similar to Furuya’s kogals. 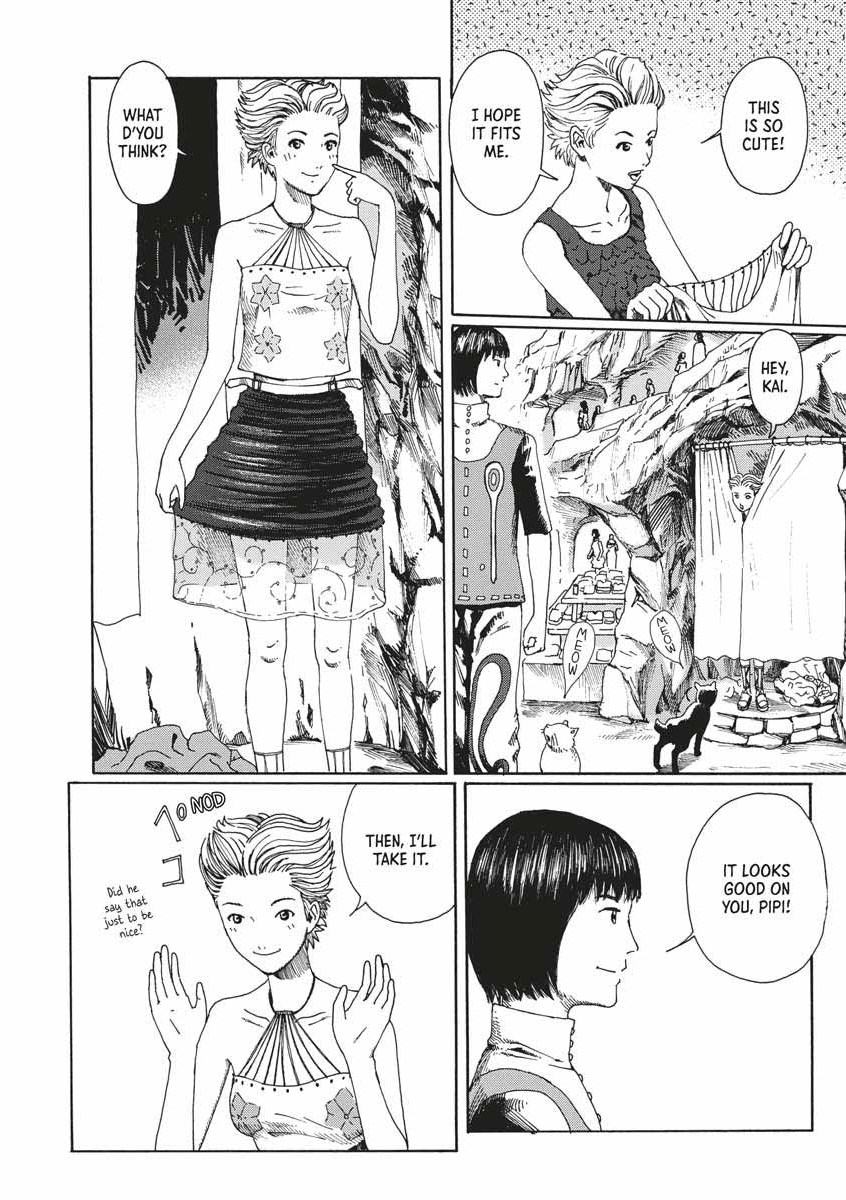 In the factory town of Gil, a young man, Kai, and a young woman, Pipi, are coming of age. Pipi has a strong interest in mechanical trades, working with her hands, following in her father’s footsteps toward the dream of creating a flying machine. Kai’s heart is also set to the skies, or rather to their limit - he is obsessed with Marie, the vast airborne mechanism that looms over their community, worshiped and revered as a deity, whose peculiar song seems to influence people’s behaviors. Kai’s obsession goes beyond reverence, into erotic fixation and dreadful curiosity. To Pipi’s dismay, Kai loves the mechanical Marie. Something has been planted in Kai, by force or by design, that draws him toward the clockwork goddess, deep into her gears where the truth of this vast mechanism, the bygone days of advanced technology which bore her, and the society her presence birthed, might be found. 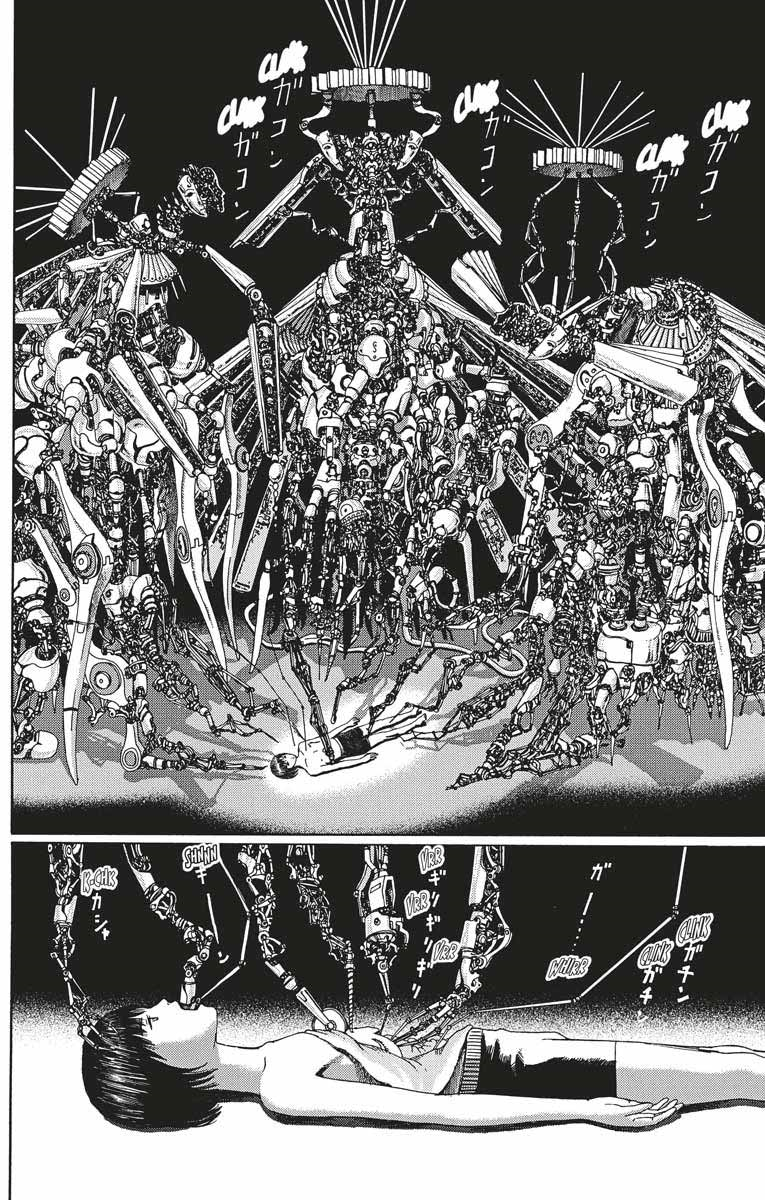 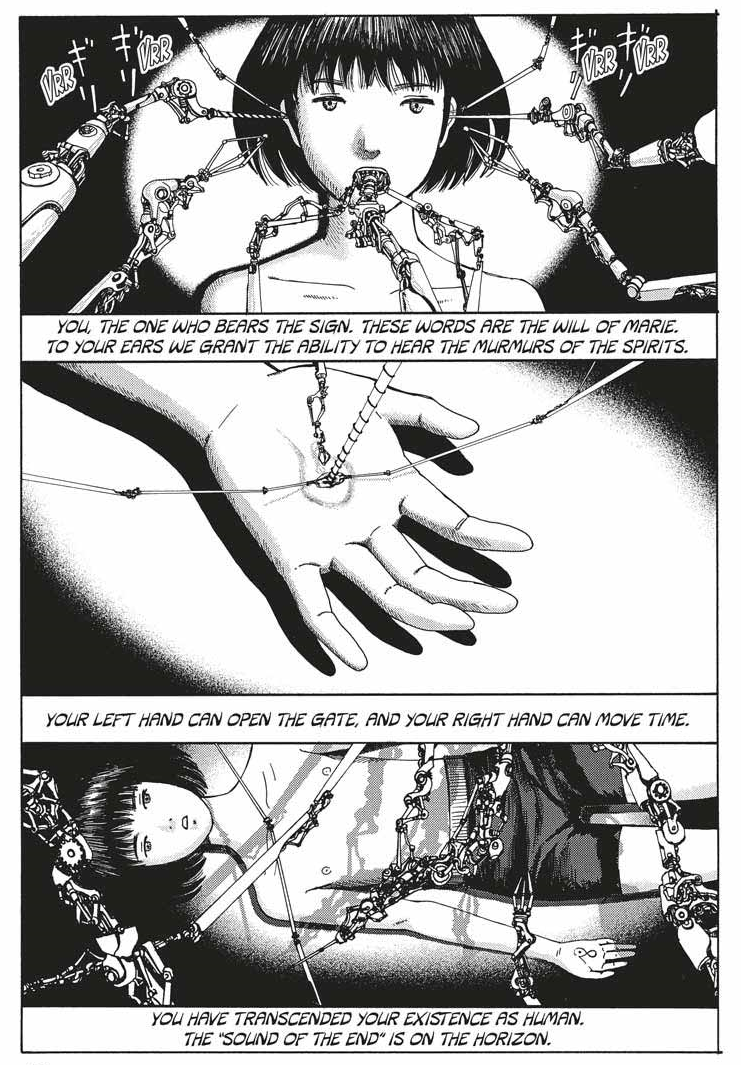 The Music of Marie teases the reader with tableaux that might be worldbuilding and revelations that could lead to a climax, appearing to coalesce into a hero's journey in its final chapters before disintegrating into unrealities: phantoms of troubled people’s minds. Like Furuya’s gag manga, each chapter introduces a concept and toys with its consequences, the joke being the absurd presence of the divine, giant pretty girl hovering in the air, whose presence modulates the reality beneath her. There is a hint of misogyny to the role of “young woman” as a depersonalized machine of regulation, a visible Other that anyone can love, hate, revere or fuck, but like Praxiteles’ Aphrodite, who sent a mortal man to his death for staining her thigh with seed, no defilement can change Marie. Marie is a curse which cannot be broken, a maiden who cannot be violated. She is a necessary presence and a violent entity, a constant in the face of which society constructs itself. The Music of Marie is a cosmic horror manga and a social satire about nothing less than the divine feminine, an absurd and frightening concept indeed. 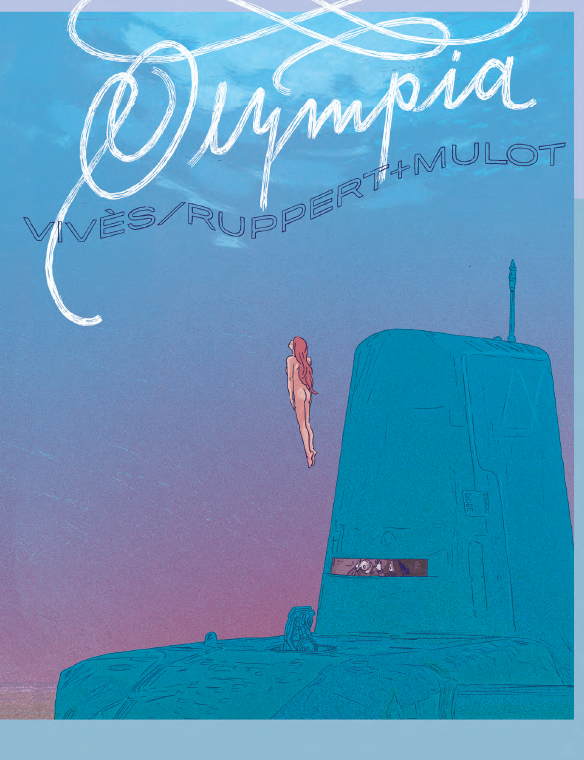 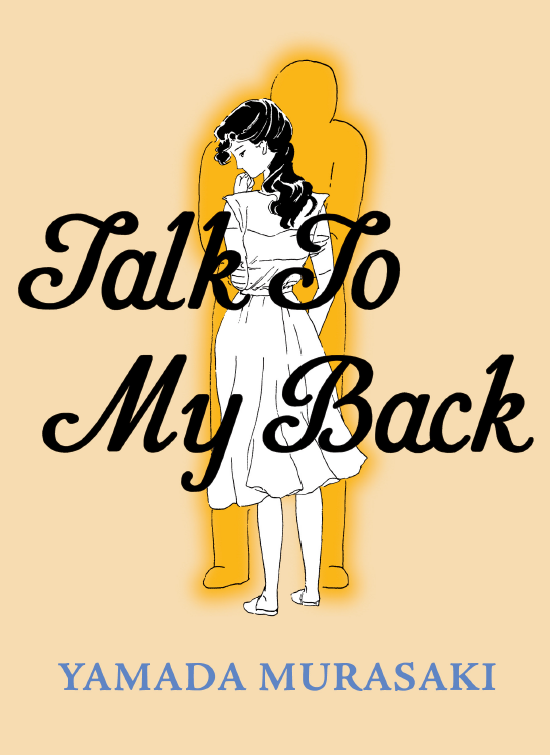