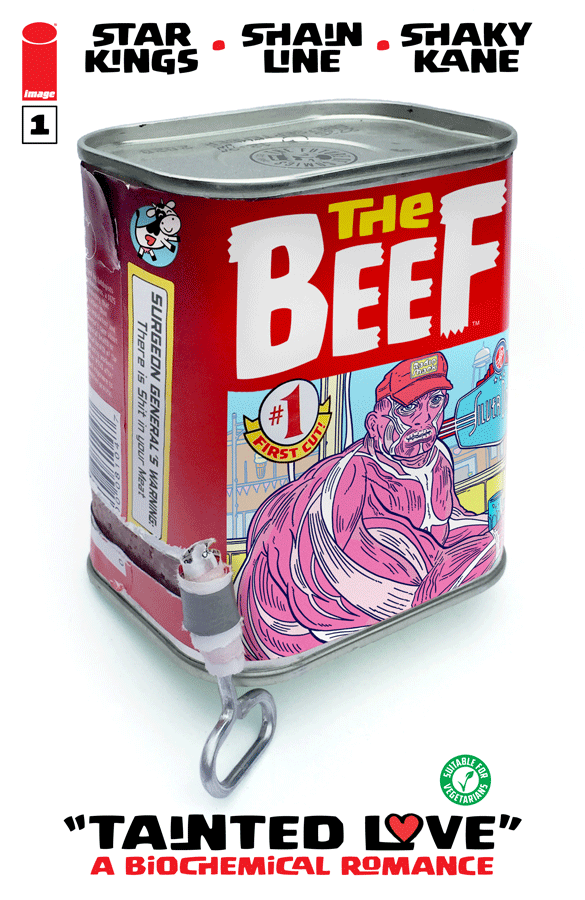 The Beef goes into very graphic detail about how cows are killed in slaughterhouses. You see the machine that puts the bolt in the cow’s brain. You see the animals being dismembered. Fun stuff.

That warning goes up front because the folks who made The Beef are making a point here. It’s not a particularly subtle point but this kind of messaging rarely is. Slaughterhouses are foul and filthy places under the “best” of circumstances. The premise underlining this book is not just that slaughterhouses are bad, but that the act of killing animals for food – and in such an especially savage way, for both the animal and the man – is inescapably morally corrosive, and that corrosion in turn trickles its way back up the food chain when the meat is processed for human consumption.

Frankly, The Beef is an unpleasant comic. I wouldn’t describe it as a bad comic, however. On the contrary, it definitely knows what it is about and sets about its business with a rather impressive single-mindedness. One issue is really too early to tell which direction the story may be heading, but it’s certainly not heading in a pleasant direction. Anyone thinking about picking this comic up, even given the creative team, should brace themselves for a book that has been purposefully designed to crawl under the skin of anyone who reads it.

The meeting of the creative minds here between writers Richard Starkings and Tyler Shainline and artist Shaky Kane was fated to perturb. Kane is the artist behind The Bulletproof Coffin series, one of my favorite books of the last decade or so. (If you haven’t read it yet I give it my highest possible recommendation.) Kane’s style is interesting in that while there are many points where it almost seems to verge on a blank pastiche of some number of mainstream artists (particularly of the bronze age, a category that here includes that includes Kirby at his most hermetic), his approach never settles into a pleasing or satisfyingly retro vibe. This is one reason why The Bulletproof Coffin was such an effectively wicked book. Even though the subject matter was very familiar – filthy superhero parody, for Goodness’ sakes, hardly new even when Rick Veitch put out Bratpack almost thirty years ago – the book managed to make its exploration of fictional comics history seem relentlessly seedy and unsettling in a manner that made the obvious Kirby swipes seem less approachable and more . . . soiled. 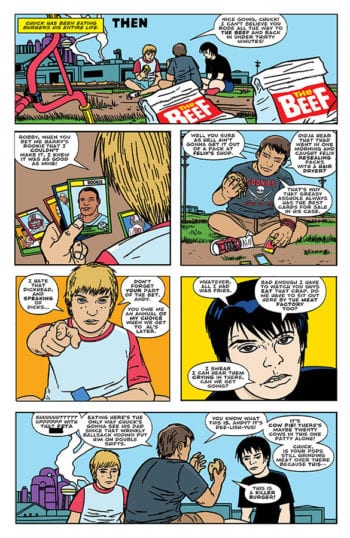 The Beef highlights another influence in the form of Gilbert Hernandez. It’s not just the milieu – much of the story features kids being assholes to each other, and it’s not like Los Bros have a monopoly on that – but the way Kane seems to want to make his characters ill at ease in their own comic. The brush lines are not smooth and sensuous but mottled and very slightly uneven. Hernandez uses that trick to make beautiful people look ill-at-ease, and Kane does much the same here, folding Hernandez’s flat compositions with a bit of Kirby’s grotesque mannerisms. Kane draws local toughs driving around in an expensive car to terrorize Mexican farm workers like creatures crawled up from the firepits of Apokolips.

It’s an unsettling world and the flat pastel colors throughout add to the disorienting effect. This is in many ways a very gorgeous comic – every way other than what is actually depicted therein, that is. The colors pop. Greens and reds throughout shade into neon and pink, everything seems to be just a little bit too bright, like a burger let in the heat lamp too long. Something turned. Maybe check the expiration date, see how it smells before you eat it. The comic looks pretty ripe. Overripe like a piece of fruit fallen off the branch and half-consumed by ants.

Thematically the book is a sibling to Starking’s Elephantmen franchise. Considering that the series originated with a character who first appeared in ads for lettering software in Wizard, the Elephantmen series and its sort-of protagonist Hip Flask (he’s the giant hippo in a trench coat) has proven surprisingly durable. I don’t mean “surprisingly” in a flip way at all: I was surprised not just that it was still being published regularly but that it was inching ever closer to triple digits. The book just hit issue #80, and that is a genuine triumph in any retail climate. I’ve never followed that book regularly but I’ve dipped in and out over the years, enough to see that Starking’s comics usually share two traits. The first trait is extraordinarily high production values that betray a distinctive European influence, a direction cemented by Ladronn’s close association with the early days of the franchise. The second is a relentless commitment to ecological themes, particularly (in Elephantmen) relating to wildlife preservation, genetic tampering, and the unseen / ignored environmental costs of war. 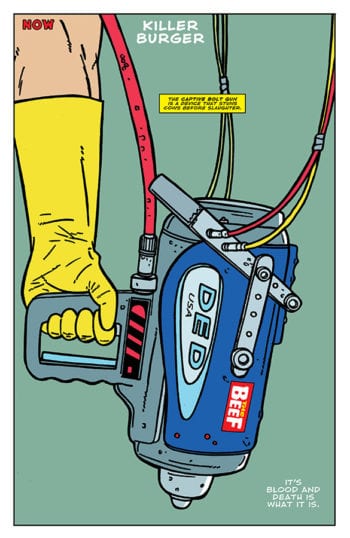 One of the reasons I’ve never stayed with Elephantmen for any amount of time despite it being a generally very nice looking book is that it can be extraordinarily depressing. The Beef certainly bears a strong resemblance to Starking’s other series in terms of themes but Kane’s art completely shifts the tone. The Beef is perverse and unsettling. The main character, Chuck Carter, has been working for a while at the same slaughterhouse at which his dad worked and lost various body parts. He also eats hamburgers all the time – made with meat from his own slaughterhouse. The book doesn’t flinch from the fact that Chuck is probably not right in the head after years spent killing animals in a very intimate and gruesome fashion.

If you guessed that Chuck was a put upon sad sack – well, sort of. He’s just working the same extremely depressing job as his dad, but he’s also got a protective eye out for beautiful strawberry picker (and bombshell of positively Palomarian proportions) Mary Lynn. Somehow or other in the course of a lifetime spent killing cows and then eating the same cows in hamburgers Chuck develops some kind of weird chemical imbalance that transforms him into the grotesque Beef creature advertised on the cover.

The Beef is a nasty comic, but it’s a very deliberate nastiness. The comic asserts in very certain terms that the act of killing, any killing, is harmful to the soul and the people who profit off the act of killing make themselves less human in the process. The bullies who follow Chuck from his adolescence to adulthood – the plant owner’s thuggish offspring the Vodino Brothers – are unremittingly awful. They stick a switchblade in a cow’s ass just to see it knock some people over, and then have to shoot the cow to prevent it from actually maiming anyone. They are, in other words, some of the most punchable and sadly realistic villains I’ve seen in a while. Bullies, basically, as willing to commit casual acts of animal cruelty jut to fuck with some fruit pickers as to sexually assault women in the middle of a restaurant.

The Beef isn’t a subtle book but that’s not necessarily a bad thing. What I don’t know is whether or not I have the stomach to continue past issue one, despite my sincere love of Kane’s distinctive art. It’s a book that churns your stomach, designed with the purpose of disgusting the reader with the act of preparing and eating meat. On that level the politics behind the story almost appear didactic, but they’re very deeply felt. This isn’t a book that takes half-measures to gets its story across. It’s actually very disgusting in a number of places, and that sensation of disgust is key to what the creators are trying to do here. 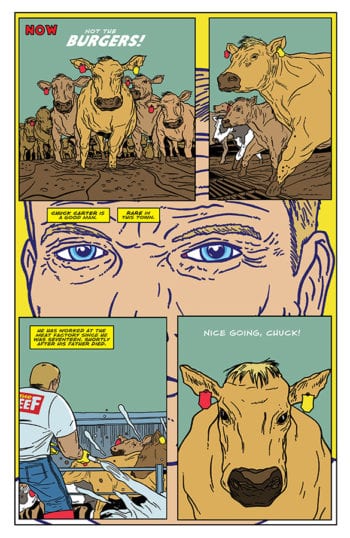 It’s not just that the slaughterhouse is a foul and terrible place to work. It’s that the mere existence of the slaughterhouse exerts a demoniacal pull on the people of this book. It’s a site of almost supernatural malevolence, but it also represents necessary employment to an economically depressed area. The people who own the slaughterhouse know full well that everyone who works there needs the job – no one goes to work at an industrial slaughterhouse for shits and giggles. They abuse everyone because they can.

There is something distinctly awful about the fact that it’s 2018 and we find ourselves in need of an updated superhero comic version of The Jungle, of all things. The same problems Upton Sinclair wrote about over a hundred years ago are still problems: people working terrible jobs, get paid almost no money to do one of the most dangerous and existentially depressing jobs in the world, all while producing badly tainted meat that makes people terribly sick. Bosses are still pushing workers to the point of exhaustion because there’s basically no oversight. And the people who own factories do whatever they can to make workers’ lives as unpleasant as possible. Welcome to life in these United States of America. Yee haw. 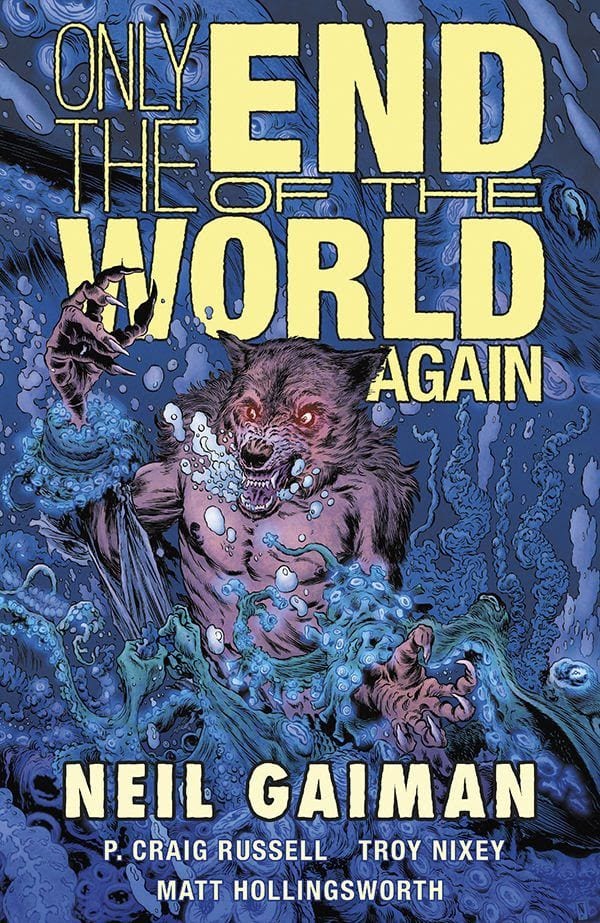 Only the End of the World Again 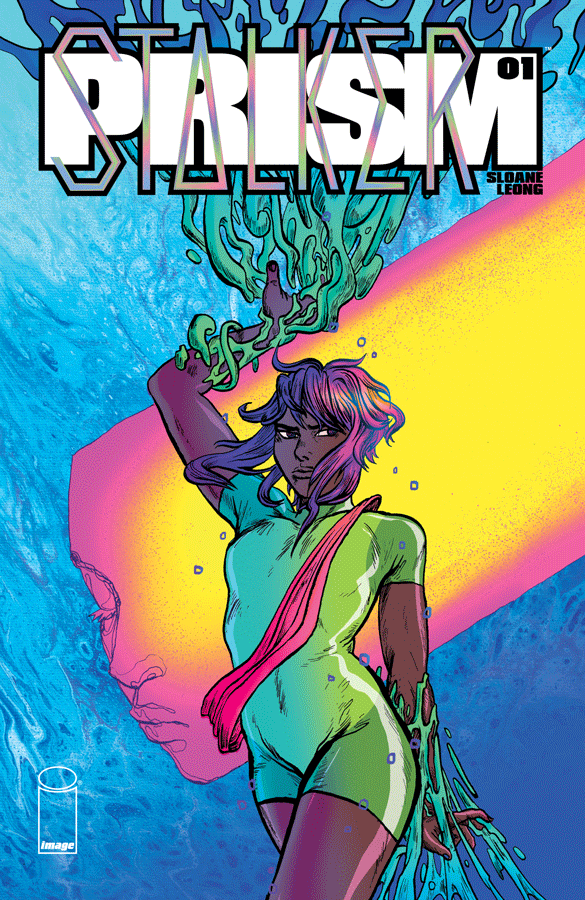