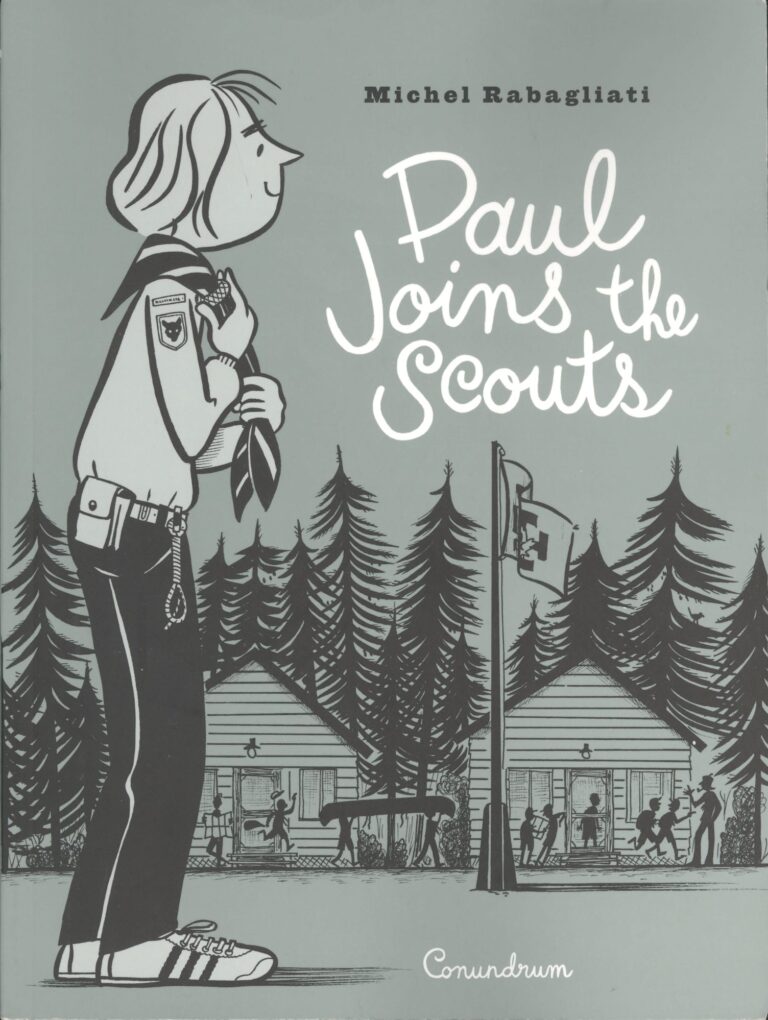 If you’ve enjoyed any (or all) of Michel Rabagliati’s previous graphic novels, you’ll love Paul Joins the Scouts, a French-to-English translation of Rabagliati’s Paul au Parc (2011) recently released by Conundrum Press. Scouts is also a fine introduction to Rabagliati’s signature virtues, including his penchant for sentiment, his supple cartooning, and his use of detailed, map-like panels to chart out the environments his characters inhabit. Something does trouble me about Scouts, and about the trajectory of Rabagliati’s career, but let me praise Scouts first.

Like all of Rabagliati’s books, Scouts is semi-autobiographical. Paul—a Québécois kid who crushes on a neighborhood girl, reads bande dessinée, and participates in Cub Scout activities—is a stand-in for the cartoonist, and Scouts takes place during the years of 1969-1971, when Rabagliati and his avatar were between eight and ten years old. Much of the story is understandably filtered through Paul’s point of view, but Rabagliati also includes scenes that focus on other characters and their unique circumstances, most notably four vignettes showing how Paul’s scoutmasters move through their everyday lives and jobs. (The most edgy of these belongs to scoutmaster Jean-Claude, who is revealed to be gay and who bristles with righteous anger when his partner suggests that Jean-Claude is turned on by the cute Scouts “in their little shorts and scarves!” [80]) Additionally, Rabagliati chronicles how the political unrest in Quebec in the early 1970s (specifically the violence of the Québécois separatist movement, and the Draconian reaction to the separatists by Prime Minister Pierre Trudeau, dramatized in the picture below) affects even Paul and his friends. In Scouts, Rabagliati skillfully fuses autobiography and Canadian socio-political history into a compelling artistic whole. 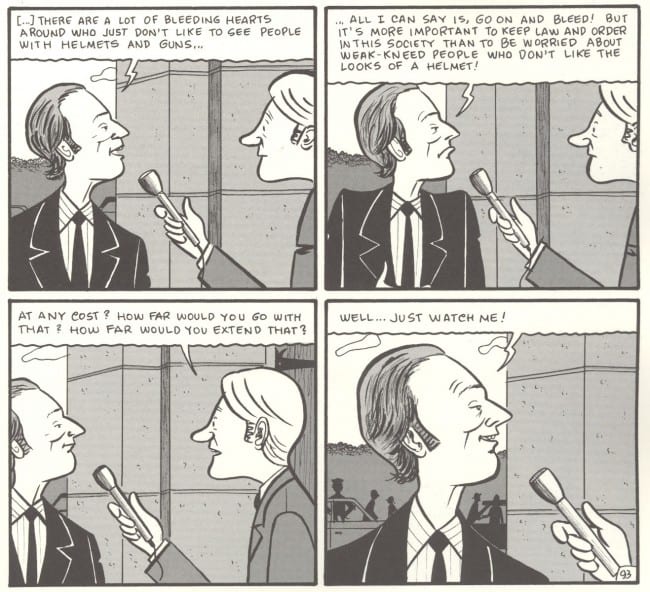 Here on TCJ a few weeks ago, I wrote an essay about Rabagliati’s work before Scouts, arguing that readers can assemble a rough but consistent chronology for Rabagliati/Paul’s life from the events presented and alluded to in such “stand-alone” books as Paul Has a Summer Job (2002) and The Song of Roland (2009/English translation 2012). Scouts fills out the chronology further, showing us much more of Paul’s childhood than we’ve previously seen. I also mentioned that Paul’s father typically gets a lot more narrative attention from Rabagliati than Paul’s mother, but that too is corrected in Scouts, where Paul’s mother Aline is portrayed as a vivacious young wife frustrated by living in an apartment next door to two nosy relatives, one of whom is Paul’s great-aunt Janette, “seamstress, hat-maker and old maid” (17), who we’ve seen previously (as a much older person) in Paul Moves Out (2004/2005). The pleasures of the Paul series are two-fold: each individual graphic novel has a proper beginning, middle and end, and can be read on its own, but those who read the entire series notice reoccurring characters and motifs and can assemble a broader picture of Paul’s life.

One plot thread is Paul’s emerging awareness of himself as a comics artist. At the beginning of Scouts, Paul is a devoted reader of the French-language comics anthology Spirou, and after reading a book titled How to Become a Comic Book Artist (featuring interviews with and advice from cartoonists André Franquin and Joseph “Jijé” Gillain), Paul draws his own Spirou-influenced comic strips, with mixed results. Here are Paul’s parents trying to suss out one of his drawings:

This might be a bit of self-consciousness on Rabagliati’s part, since he’s evolved into a supremely legible cartoonist, one who uses every line, pattern and tone to construct naturalistic people and environments, even while guiding readers towards narratively relevant details. In many of Rabagliati’s panels, faces and word balloons are in plain black-and-white, popping out against backgrounds in various shades of gray, although he’ll drop white into the backgrounds when he wants us to pay special attention to elements of his mise-en-scène. Near the end of the book, Paul visits one of his scoutmasters, Daniel Sabourin, and a large panel gives us a panoramic look at the basement of Daniel’s family home: 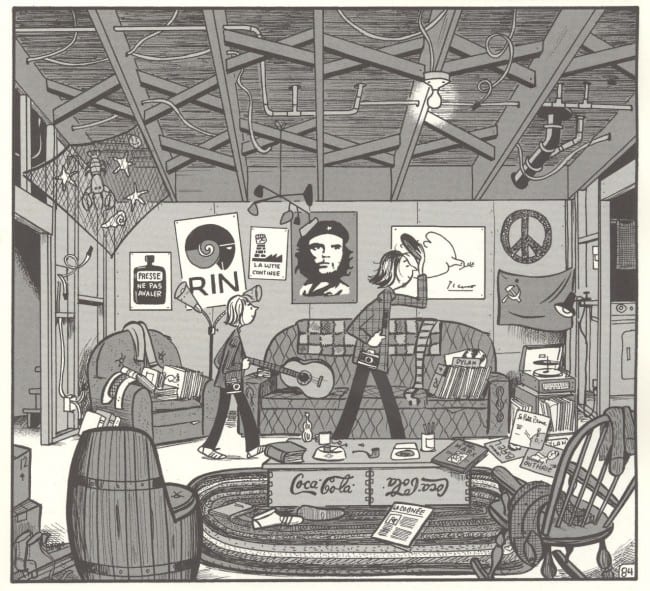 Several bright, white posters behind Paul and Daniel show off Daniel’s commitment to the 1960s counter-culture: in addition to the ubiquitous Che, there are images (“Presse ne pas avaler,” “La lutte continue”) created by the Sorbonne students who participated in the Parisian riots of May-June 1968. Other details in white include a Picasso poster, a record album of Antoine de Saint-Exupéry’s children’s book The Little Prince (1943), a poster for the Québécois separatist party RIN (Rassemblement pour l’Indépendance Nationale, active between 1960 and 1968) and a copy of the separatist magazine La Cognée (1963-67). Throughout Scouts, Rabagliati uses visual detail, dialogue and captions to define Daniel as a 1960s Québécois radical, a fact which (along with The Little Prince) feeds directly into one of the book’s climaxes. Rabagliati knows how to tell a layered, affecting story, and Scouts rewards close reading.

Weirdly, though, the essence of my complaint about Scouts is exactly about Rabagliati’s ability to create well-wrought graphic novels. Rabagliati has mastered and repeated certain literary devices—the highlighting of details, the repetition of motifs—to the point where I feel as if I’ve seen most of his moves. The first page of Paul Goes Fishing (2006 / 2008), for instance, poses a narrative question (“What does the priest find in the collection box?”) that remains unanswered until the book’s finale, as does the first page of Scouts: 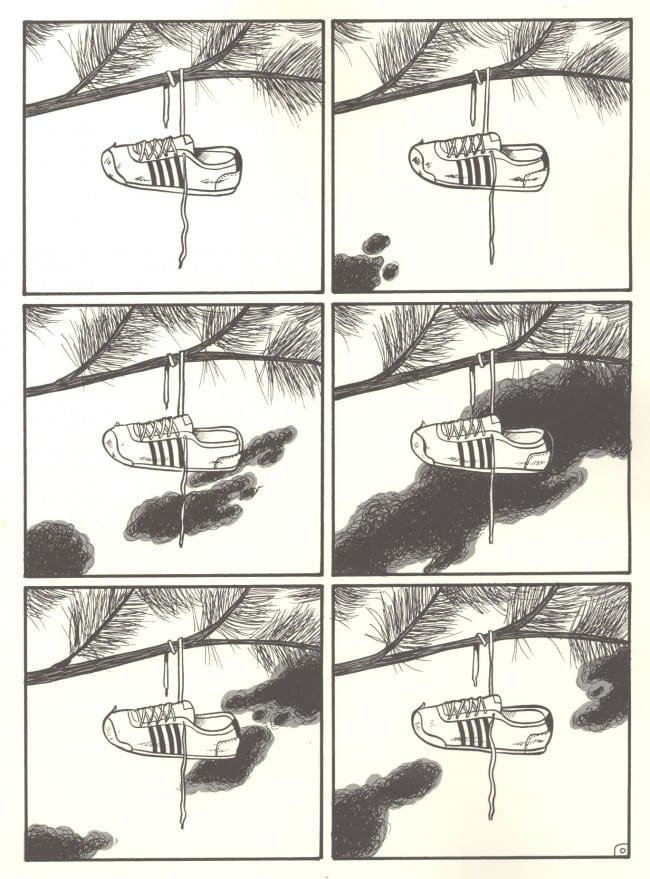 Why is there a sneaker hanging on the branch, and why is it important? Rabagliati favors stories “bookended” by similar images at the beginning and end, and in addition to the sneaker bookend, there are other images and situations (Paul sitting in the park—hence Scouts’ French title, Paul au Parc—and the theater performances Paul attends early and late in the book) that give unity to the narrative. There’s nothing wrong with Rabagliati’s continued use and refinement of certain storytelling devices; the creators he likes best (Hergé, Goscinny and Uderzo) each established formulas for an extended series, and then spent their careers working within the parameters of their series. If Rabagliati does the same, if he gives us ten more graphic novels in the same mode and as accomplished as the other Paul books, I’ll be overjoyed. But I also wonder what he might create if he suddenly abandoned his formulas, if he scuffed up the legibility and precision of his art and refused to structure his stories so tidily. I’d love to see Rabagliati take his Detour. 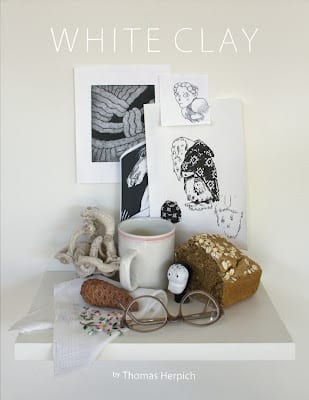 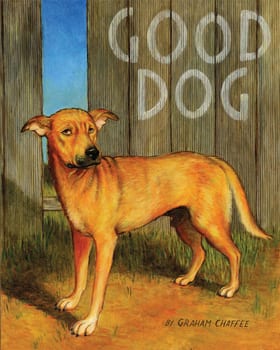