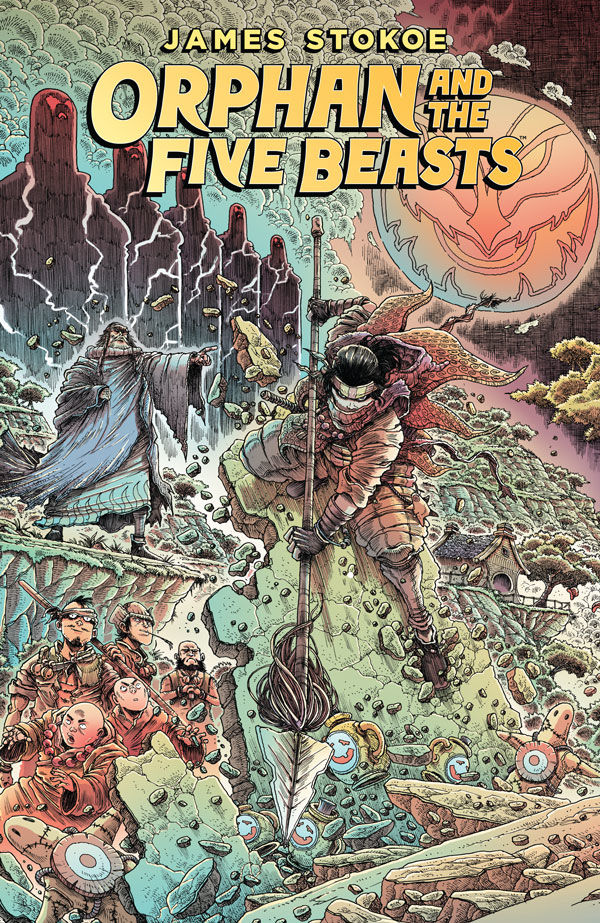 Orphan and the Five Beasts 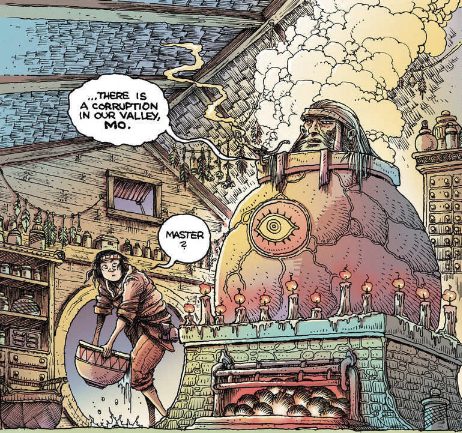 James Stokoe's latest blast of high risk cooking stalls before the main course gets going. Orphan and the Five Beasts was announced and promoted by Dark Horse as a four-issue miniseries, but by the time the fourth issue appeared, 11 months after the first one, the quartet was being reframed as a part of something longer. So this collection of those four issues duly stops mid-story, the publisher having opted to collect what they had rather than wait for a full run. No further arc has yet been scheduled, and although Stokoe has posted some in-progress work online, the hiatus currently stretches on. At some point a reviewer has to stop drumming their fingers in anticipation and get on with it.

Fans of the artist know to accept this development stoically. It isn't the first time in Stokoe's bibliography that ongoing projects have become attenuated and then stopped going on, even though rose-tinted hindsight says these breaks can mark some development in his style or interests: experimentation spurring a new creation rather than the drag of carrying on with an old one. 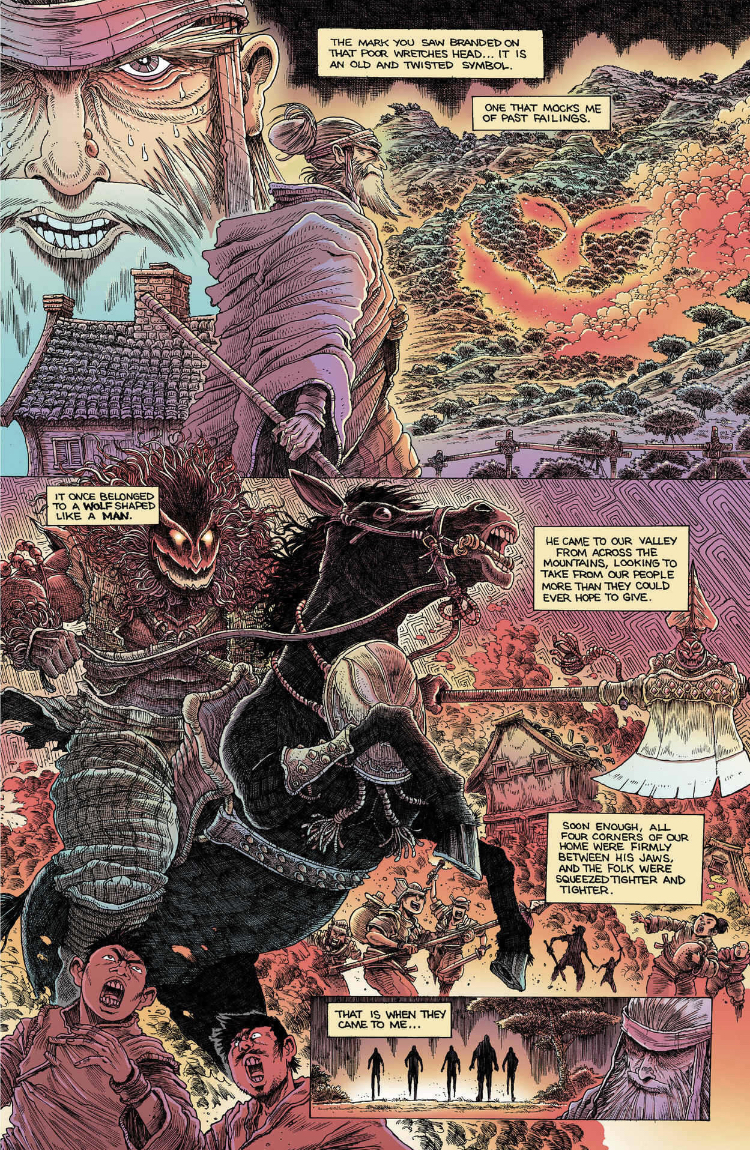 Follow the strands. "High risk cooking" is a line from Wonton Soup, Stokoe's 2007 Oni Press book about the travels of lapsed master chef turned very relaxed space trucker Johnny Boyo, drawn in a style conveying no shortage of relaxation on the part of the artist. Not yet teeming with the hyper-detailed backgrounds and drastic forced perspectives that would come later, the black & white art in Wonton Soup and its sequel, 2009's Wonton Soup 2, is all soft curves, thick ink lines, heavy-lidded slackers in beanie hats, and alien cuisine squirming in neutrino-powered quantum grills. A further story, War Wonton Soup, went unpublished, but pages of it glimpsed in Grunt: The Art and Unpublished Comics of James Stokoe (Dark Horse, 2019) show the addition of color, and with it the adoption of a palette Stokoe has used ever since: flat dry hues reminiscent of braised meat and seared vegetable matter, plus a cast of fleshy bulbous organic creatures that look like relatives of things drawn by Vaughn Bodē.

That style went into practice somewhere else. Image's Orc Stain (2010-12) (but unfinished) had the same colors and fleshy varmints, plus droll horny orcs obsessed with male potency and colossal dongs decorating vast ornate palaces; the Stokoe triangle of Food:Sex:Death cemented. It also had a gleeful gigantism, and that too was energized in a better venue courtesy of IDW's Godzilla comics. Godzilla: The Half-Century War (2012-13) let Stokoe diligently draw every scale on giant reptilian hides and every shattered window in blasted cities, and Godzilla in Hell (2015) had the big guy falling inexplicably into Dante's Inferno, where Godzilla's personal damnation turns out to be an endless parade of punishment beatings and brawls without even the merciful release of death - a black joke at Gojira's expense. A demonic opponent splits apart and sprays writhing crimson tendrils everywhere, a visual that could be a storyboard for one of Rob Bottin's pneumatic horror movie special effects. And a more direct horror movie aesthetic promptly manifested in Aliens: Dead Orbit (2017), claustrophobic xenomorph carnage which looks on the face of it like the only Stokoe comic to date without humor. Or it would do, except that in a certain light the Alien franchise's baseline horror—John Hurt's high risk breakfast getting him ripped in half by a sadistic phallus that surveys the watching rubes with disdain and wishes them a hearty fuck you before skedaddling—is a very Stokoe comedy beat. 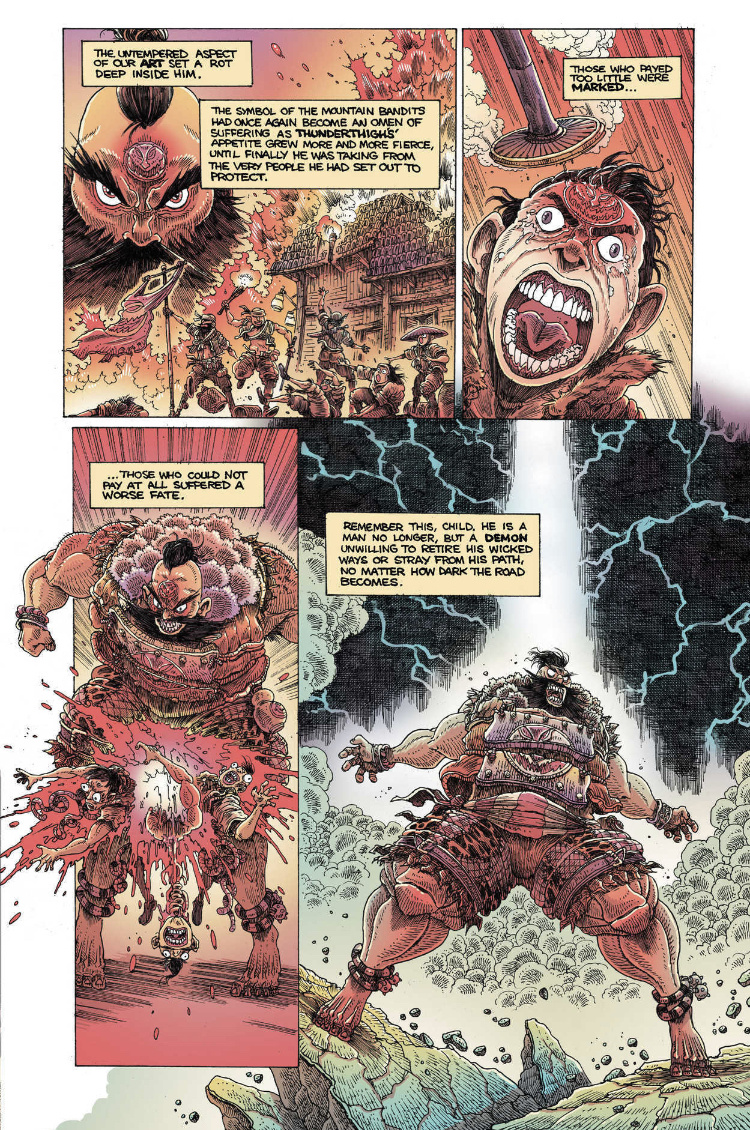 As it stands for now, Orphan and the Five Beasts is knockabout; a kung-fu comedy where the excesses of the Hong Kong slapstick anything-goes wuxia movies are goosed even further by the artist's infinite joy in drawing figures hitting each other. Young novice Orphan Mo, having been trained in ways of philosophy and combat by her venerable Master, sets off to face five former pupils of the same Master who have now succumbed to corruption and decadence. "Fiends that use our art without understanding its core facets... twisting its virtues into unrecognizable malevolence," laments the Aged Ghengis, sat in a one-man sauna that looks a lot like a pot on a stove.

"Unrecognizable" might be pushing it, given the pastiche of hero's journey and Eastern mythology being served up, but the plot is merely idling compared to the velocity of the art. Both villains featured so far have broken the connection between the spiritual and the physical preached by their former guru and instead gone all-in on the ways of the muddy flesh and the full stomach. One is Thunderthighs, with grotesquely over-muscled steroidal lower limbs ready to stomp an opponent to paste. "You've got the moves, sister! But not the BEEF!!" shrieks he, in universal slang. Then there's Chopper Teng, with powers residing in his arms, and who runs an infernal restaurant, perverting the culinary arts on top of his philosophical crimes. Which body areas the remaining devils will flaunt remains to be seen, but gonads could well be on the menu. 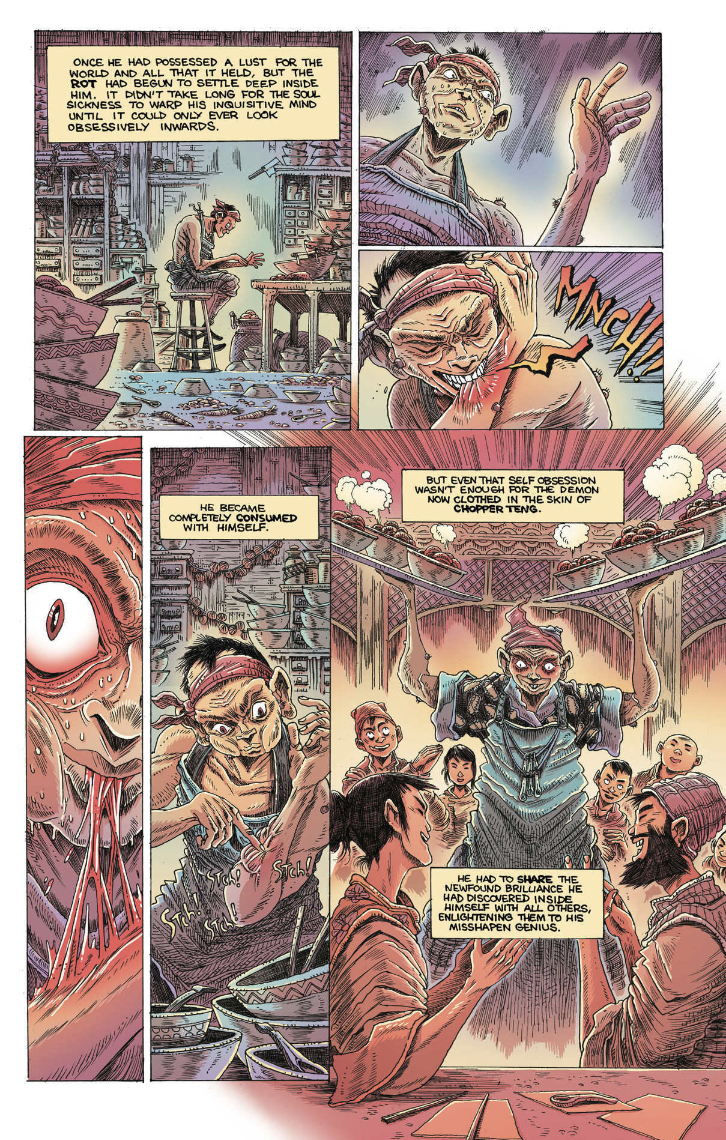 Stokoe is so immersed in the life of the body that his art has no real room for the life of the mind, and the comic's lament for pure things doomed always to decay extends to the theory that you can fix this by slicing the impure into thin strips - a mixed proposition. His chosen route to an immersive experience on the page is pure visual sensation and the momentum of endless flailing bodies, although it feels like Stokoe's own physical sensations sit at the center of gravity: the pleasures that he contended with while drawing it. There is no special pleading or self-congratulation, there's not a moment you can't anticipate, but the artist is riding a gleeful wave that like all gleeful waves looks like it will never stop, until it does. 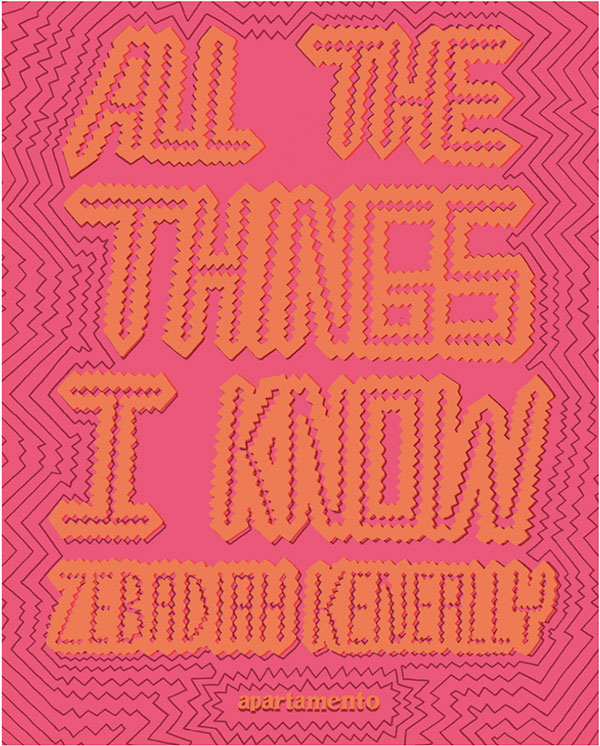 All The Things I Know 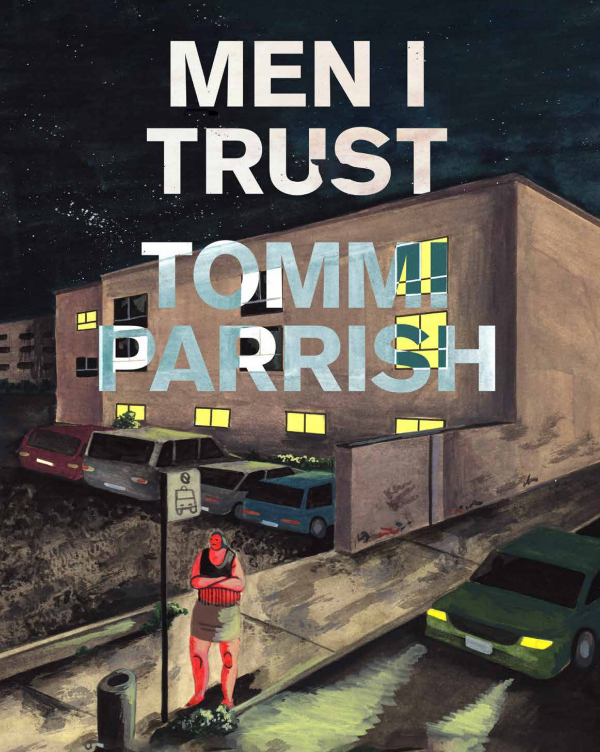